On May 27, 2010, the US Patent & Trademark Office published two distinct Apple patent applications. The first covers a new wireless earphone-microphone device for use with an iPhone and/or the 3G based iPad. The second patent covers advancing iPhone's audio quality by using audio beamforming with input from a microphone array. This will greatly enhance voice clarity and voice recording of events, for example.

Apple's patent is about an earphone that is combined or integrated with a microphone to form a headset that could be used for two-way communications with an iPhone or even a computer if used with voice over IP (Internet Protocol) software. The headset could communicate with the host device through either a wired connection or a wireless link.

Under typical imperfect conditions, a single microphone that is embedded in a mobile device does a poor job of capturing sound because of background sounds that are captured along with the sound of interest. An array of microphones can do a better job of isolating a sound source and rejecting ambient noise and reverberation.

Beamforming is a way of combining sounds from two or more microphones that allows preferential capture of sounds coming from certain directions. In a delay-and-sum beamformer sounds from each microphone are delayed relative to sounds from the other microphones, and the delayed signals are added. The amount of delay determines the beam angle--the angle in which the array preferentially "listens." When a sound arrives from this angle, the sound signals from the multiple phones are added constructively. The resulting sum is stronger, and the sound is received relatively well. When a sound arrives from another angle, the delayed signals from the various microphones add destructively--with positive and negative parts of the sound waves canceling out to some degree--and the sum is not as loud as an equivalent sound arriving from the beam angle.

A beamforming microphone array may be made up of distributed omnidirectional microphones linked to a processor that combines the several inputs into an output with a coherent form. Arrays may be formed using numbers of closely spaced microphones. Given a fixed physical relationship in space between the different individual microphone transducer array elements, simultaneous digital signal processor (DSP) processing of the signals from each of the individual microphones in the array can create one or more "virtual" microphones. Different algorithms permit the creation of virtual microphones with extremely complex virtual polar patterns and even the possibility to steer the individual lobes of the virtual microphones patterns so as to home-in-on, or to reject, particular sources of sound. Beamforming techniques, however, rely on knowledge of the location of the sound source. Therefore it is necessary to aim the beamforming at the intended sound source to benefit from the use of a microphone array. It would be desirable to maintain the aim of the beamforming when the microphone array is part of a mobile device. 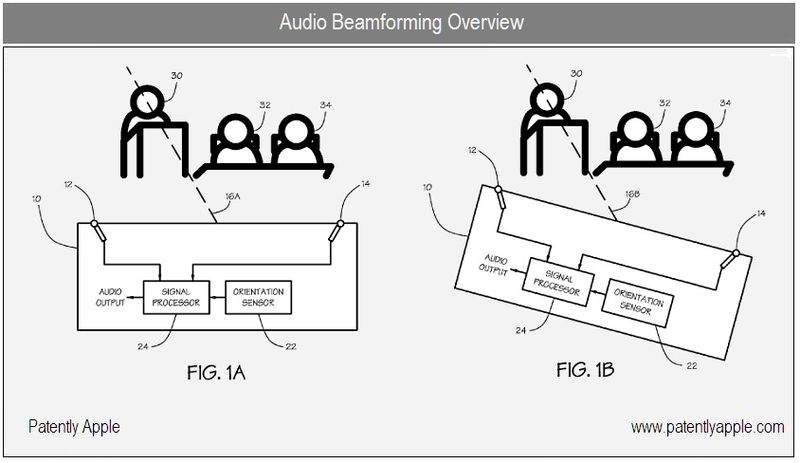 This ties in elegantly with the 2nd (assumed) microphone beside the headphone socket on the iPhone 4G/HD. We assumed it was only for noise cancellation, but would double nicely for this.

iPhone OS 4 also has support for stereophonic panning which could implicate a stereo recording function when doing video capture.