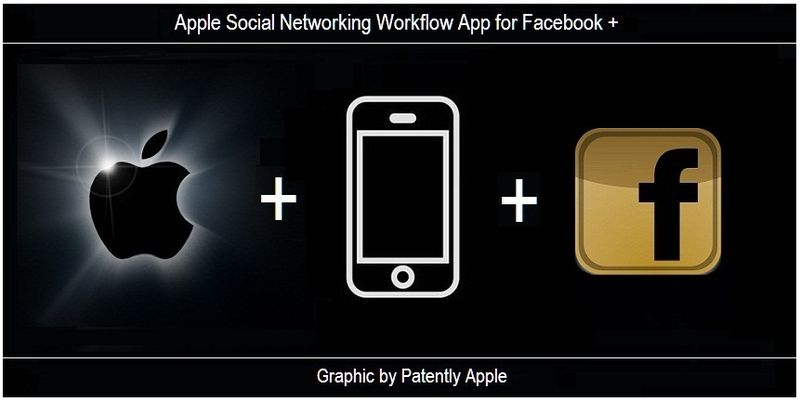 Last Wednesday the Business Insider reported that a mobile industry insider confirmed to them that Apple was building Facebook features into iPhone OS 4. Perhaps "Apple's new hooks into Facebook," reported Frommer "will make this sync process part of the phone's operating system and not just a feature of the Facebook app." Coincidentally, a recently published Apple patent sheds light on this very subject under the scope of a fuller social networking application concerning various workflows including an "Add Contact" workflow and a "Social Networking" workflow which specifically highlights an exemplary Facebook example. This report covers Apple's "Workflow" patent that is indeed presented as a possible future iPhone OS upgrade consideration.

Typically, several actions are required to transfer data to and between electronic devices. For example, to create a new contact file, a consumer may perform the following steps: open a mail application, enter the contact person's phone number and email address, select a ring tone, open a camera application, take a picture of the person, and store the picture with the contact file. The consumer may frequently repeat the same series of steps each time a new contact is added. The consumer also may need to instruct the other person on how to generate or transmit the requested data. Further, electronic devices may operate using different operating systems and software applications. Additional steps may be required to convert information on one device into a format compatible with another device. The series of repeated steps may be complicated and time consuming.

Apple's patent is directed to techniques for performing a workflow between two or more electronic devices: Devices that Apple's patent illustratively limits to the iPhone and iPod touch. The patent states that one of the devices will function as the "Initiator Device" which controls the workflow and sends instructions for executing the workflow to the second device which is considered the "Target Device."

The instructions generated by the initiator may allow both devices to accomplish a shared goal. For example, the initiator device may have a workflow for adding a new contact that includes receiving an electronic business card and adding the contact as a friend on a social networking site such as Facebook. However, the target device may not have this workflow installed. The initiator may generate a workflow script for performing these actions and may send the workflow script to the target device so that both devices, target and initiator, may perform these actions.

The workflow includes instructions for performing each action in the action sequence in a specific order, and the instructions may include a set of instructions for the initiator electronic device and a set of instructions for the target electronic device. The actions within a workflow may represent any of the actions that an iPhone or iPod touch is capable of performing, such as storing contact information, taking a picture, transmitting and receiving notes, texts, emails, and data files, obtaining and sending contact information by exchanging electronic business cards, synchronizing calendars and receiving a bookmark for the contact person's personal webpage. 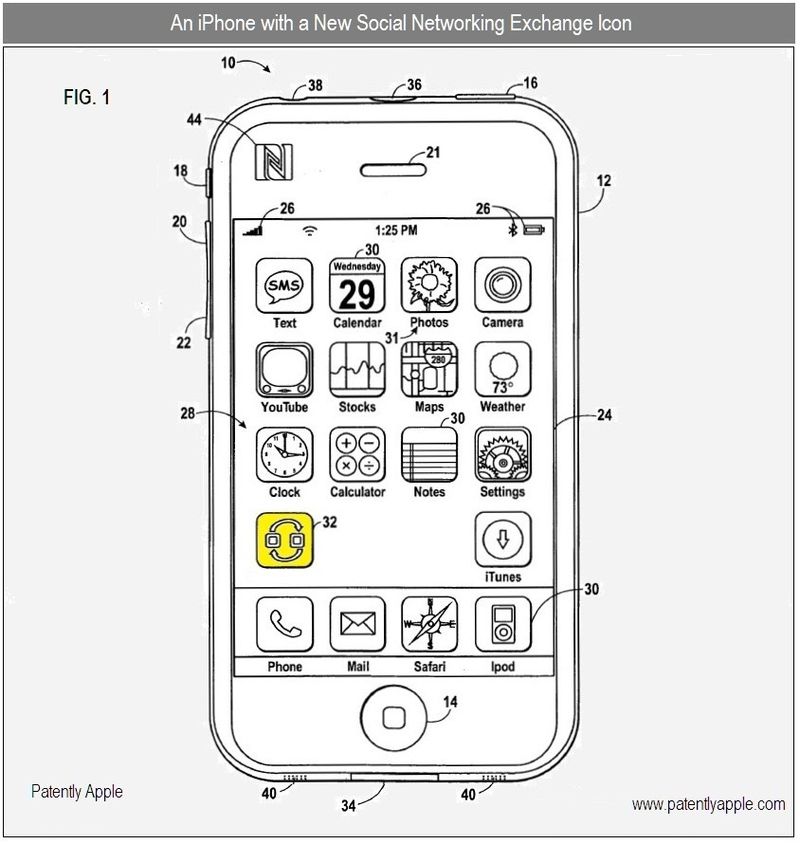 As noted above, the "Workflows" component shown as number 74 may define a series of actions that may be performed by the "initiating iPhone" and another electronic device acting as the targeted device.

For example, spouses may want to synchronize family calendars on a daily or weekly basis. One spouse's cell phone may function as the initiator device 10 and the other spouse's cell phone may function as the target device. Upon detecting a near field communication link with the target device, the initiator device 10 may initiate a workflow for synchronizing the family calendars stored on each device. The "Preferences" component - noted above as component 72, may be used to specify device identifiers for cell phones, media players, computers, and other electronic device, that when detected by near field communication may initiate a workflow. The preferences may also be used to specify which workflow is initiated upon detecting a specific device.

In Apple's patent FIG.1 shown below we see a new workflow exchange icon noted as number 32 on an iPhone. When activated, it opens the workflow application. 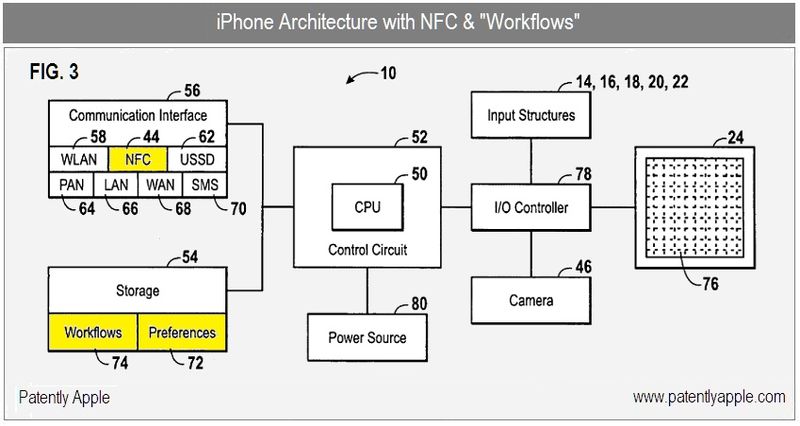 For interest sake, it should be noted that within this particular patent, the iPhone's general description includes a factoid that states that "the I/O port 34 may be a proprietary port from Apple Inc." Hmm, if it's not USB, then it could be the first sign or hint of Apple contemplating the implementation of an advanced I/O, such as Light Peak, for future iPhone-OS based devices (iPhone/iPod touch/iPad). Time will tell.

In Apple's patent FIG. 4 below we're seeing a workflow exchange that may be performed with the initiator device, represented as 10A, and a target electronic device 10B. The workflow may be performed in a wide variety of environments, such as a within a store, within a school, within or home, or within any environment that the initiator device may be located within or transported to. 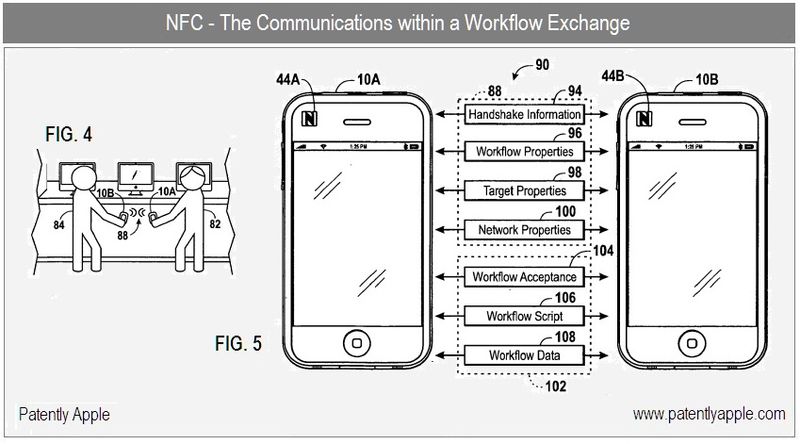 As we could see in FIG. 4, user 82 is operating the initiator device 10A within a retail store and has encountered another person 84 operating the target device 10B. The users bring their respective electronic devices in close proximity to each other to establish a communication link 88 for performing a workflow exchange. For those wishing to go deeper into the workflow of patent figure 5 could review patent points #70 to #78 of this patent which is identified at the end of this report.

Home Environment: A workflow may be used in a home environment to transfer a shopping list between a housekeeper and employer. For example, the employer may generate a shopping list and dinner menu on her electronic device 10A and execute a workflow to send this information to the housekeeper's target electronic device 10B. The workflow also may include a script that instructs the target device to send notification that the list was received and to transmit a note stored on the target device to the employer's initiator device. For example, the target device may transmit a note requesting days off to the initiator device. Hmm, all I need now is a housekeeper – Ha!

Apple's patent FIGS. 7 to 11 illustrate screens that may be included within the workflow application. Screen 128 of FIG. 7 will serve as the main menu for performing and customizing the workflows.

Each workflow may represent a series of actions that may be performed in response to selection of the workflow. For example, the "Add Contact" workflow may be used to exchange contact information with another person. The actions may include exchanging electronic business card information and taking and storing a picture of the newly acquired contact. The "Social Network" workflow may include a series of actions for adding someone as a friend on a social networking site, such as Facebook, MySpace, or LinkedIn. The actions may include navigating to the social networking site, entering the user's password, entering the contact information for the desired friend, and confirming a friend request. The actions also may include sending code to the target electronic device to instruct the target device to access the same social networking site and request that the user be added as a friend. 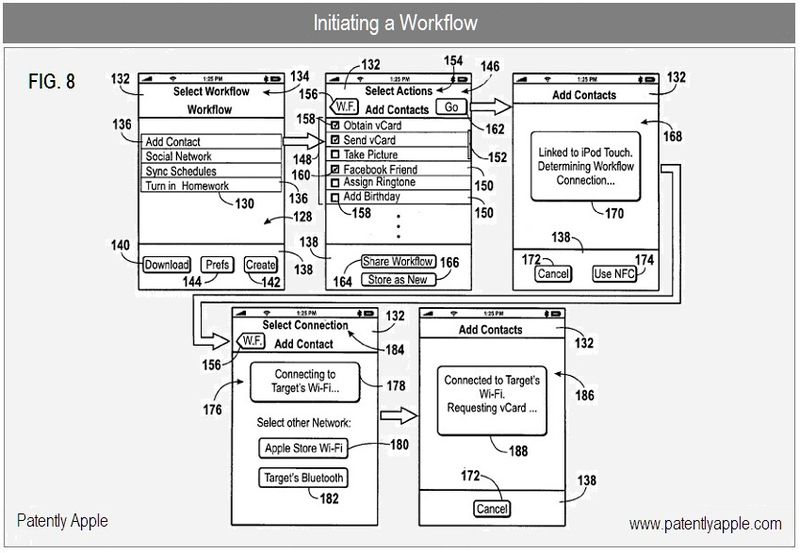 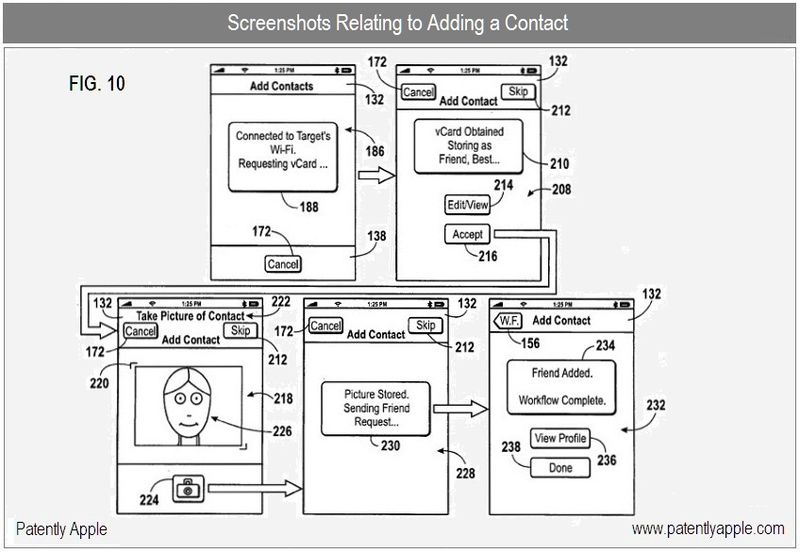 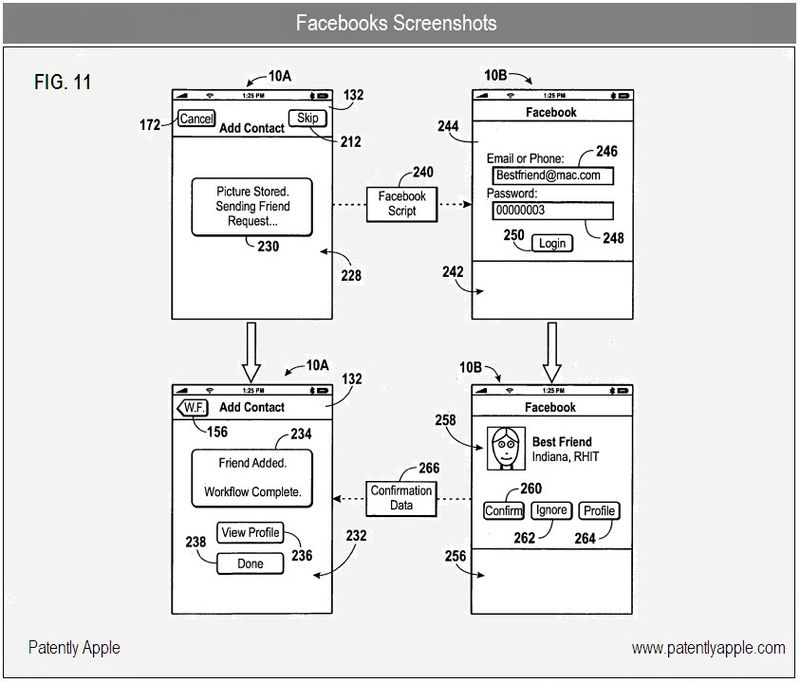 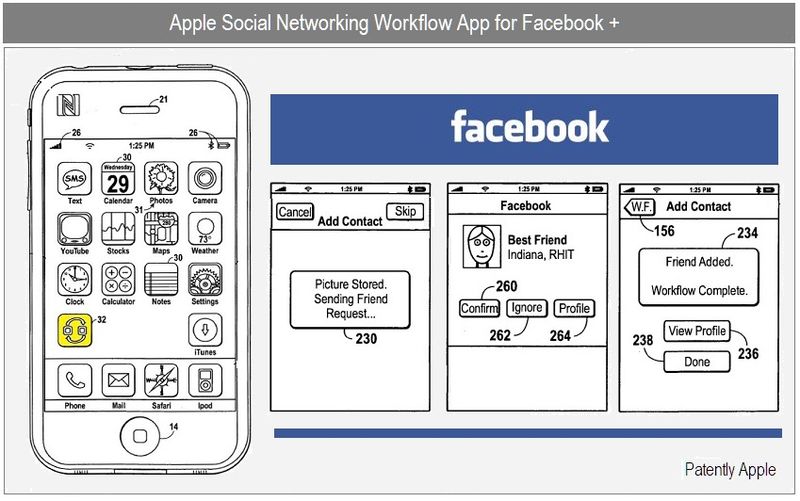 Patently Apple Referrers: Here's an alternative cover graphic for you to use in your reports.

Our Report is also Being Covered by:

I can't imagine this involves integrating Facebook directly, but a new Social Networks API and Facebook happens to be one example of the exposed Service that makes your contacts/profile/friends updates/ current on your iPad/iPhone/iPod Touch. This makes sense as integrating a Social Network backend distributed system to manage your ability to broadcast and scrape information from your various social network accounts, into a consistent, well-managed UI that doesn't require you to install Facebook.app, Twitter.app, Flickr.app, etc., unless they have more options not offered with this new solution.

This also hinges on negotiations between Apple and the various social networks to see just how much gets cross-exposure.

Facebook being the most visible social network would be the most likely candidate to have this new API demoed on.

Craig's List has had several fatalities [tragedies] happen and no I don't believe Facebook is on the skids.

With > 200 million profiles [we aren't talking about MySpace] you aren't going to see it falling apart. We might see some management changes that include a revamp of how the corporation deals with your published information and more, but we won't see this company crashing and burning due to the recent changes in privacy for advertising.

[Mark is a former NeXT/Apple engineer]

After the murder of the girl in Australia of whom she met and was lured to the forest to her ends, I think this will be a bad move on Apple's part to integrate Facebook. Additionally due to the abuse of personal data and impeding users 50 layers and options to allow them to maintain privacy. Facebook is on the skids...