NFC iPhone to Control All of Your In-Home Electronics & More 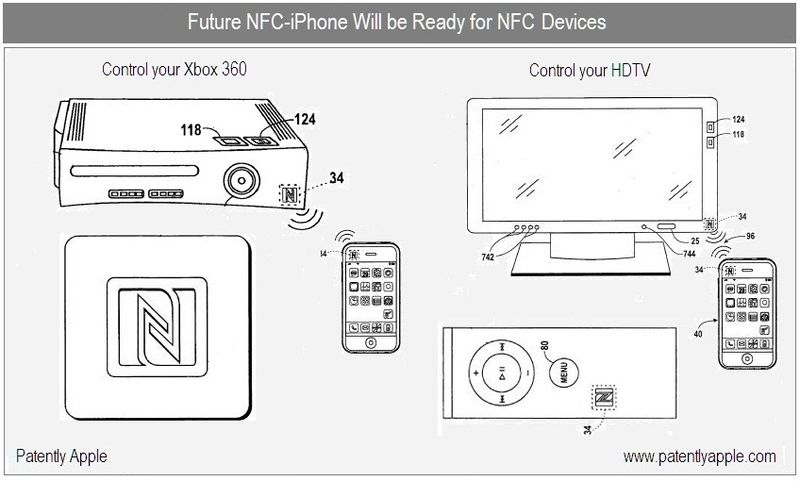 In yesterday's NFC focused report we covered a unique Point of Purchase application that Apple appears to be preparing in conjunction with a number of highlighted iPhone hardware upgrades. In today's report we're going to open the flood gates to examine how Apple's engineers see the iPhone eventually controlling every single electronics device in your home including the water sprinkler and home security system for starters. As you could clearly see from our opening graphic above, the iPhone will apparently work with Microsoft's Xbox 360, an HDTV and the Apple TV remote. But that doesn't even scratch the surface of what they envision NFC being used for. One wild 3D CAD application shown in this report will definitely open your eyes to some of the interesting twists that Apple is exploring in conjunction with NFC.

A person may use a wide variety of electronic devices each day, including computers and media players, televisions and other entertainment devices, thermostats and other utility devices, and/or consumer electronics such as digital cameras. Each electronic device may generally be controlled locally or using an associated remote control device. Initiating and establishing control of each device may involve a series of complicated, unintuitive procedures using separate remote controls. 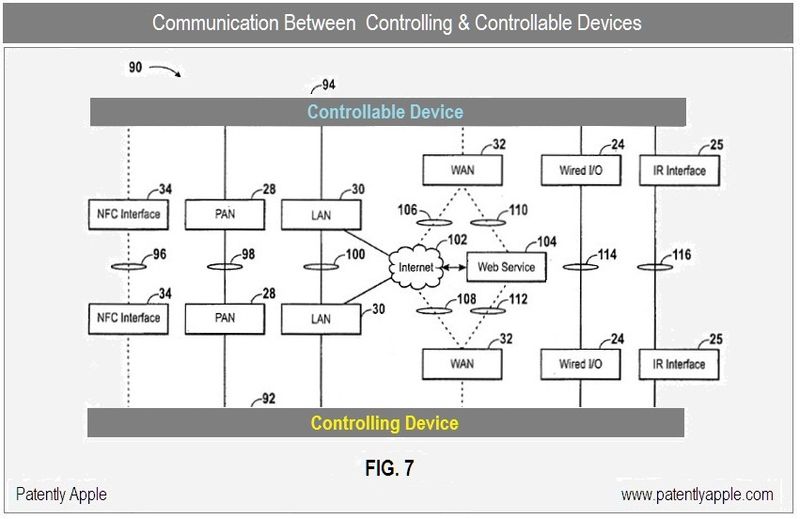 In other words, the iPhone will be the "controlling device" controlling controllable devices like Apple TV, an Xbox, a DVR and so forth. When the NFC capable iPhone initially connects with another NFC capable device, the iPhone will be given the parameters of what is controllable on the other device (sound, picture, channel, game info etc, etc, etc.)

Now here comes the fun part: Seeing some of the applications that will one day use NFC.

Apple's patent FIGS. 63a/b and 64 illustrate the use of an iPhone to control the 3-D CAD application 872 that may be running on a desktop like an iMac. 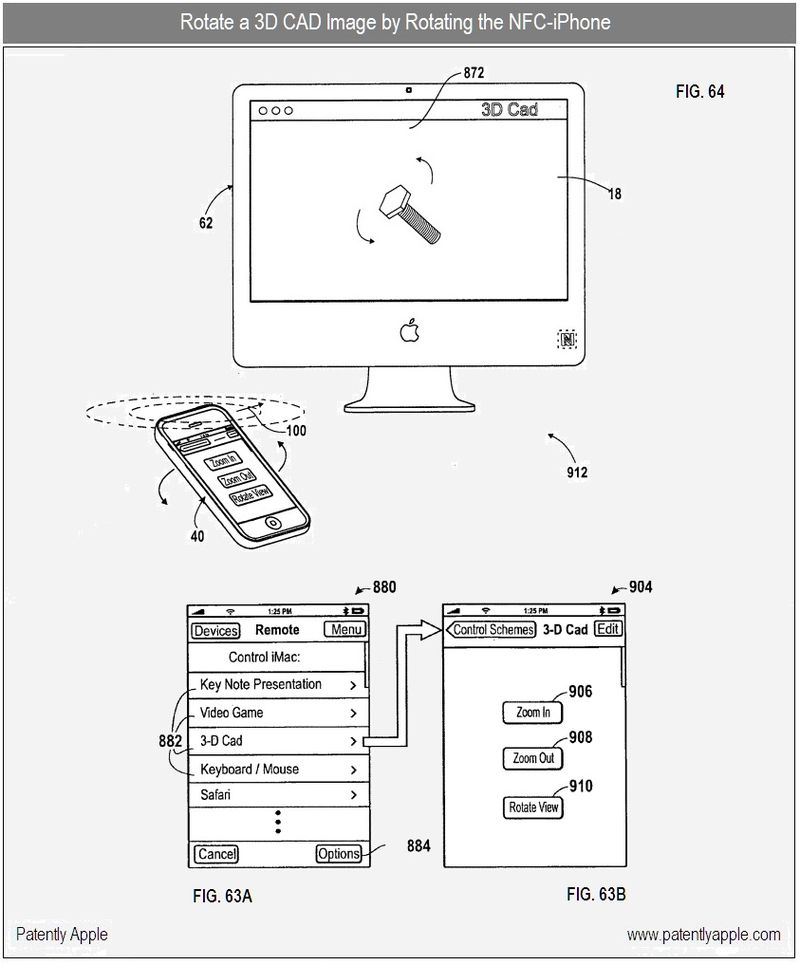 If a future iPhone will be able to rotate a 3D CAD image it will certainly be technically able to do the same for rotating images within a video game if the developers work with the iPhone's new capabilities as noted here. Other apps that are applicable are noted below in FIG. 60.

Example Set 1: The NFC iPhone for the Smart Home 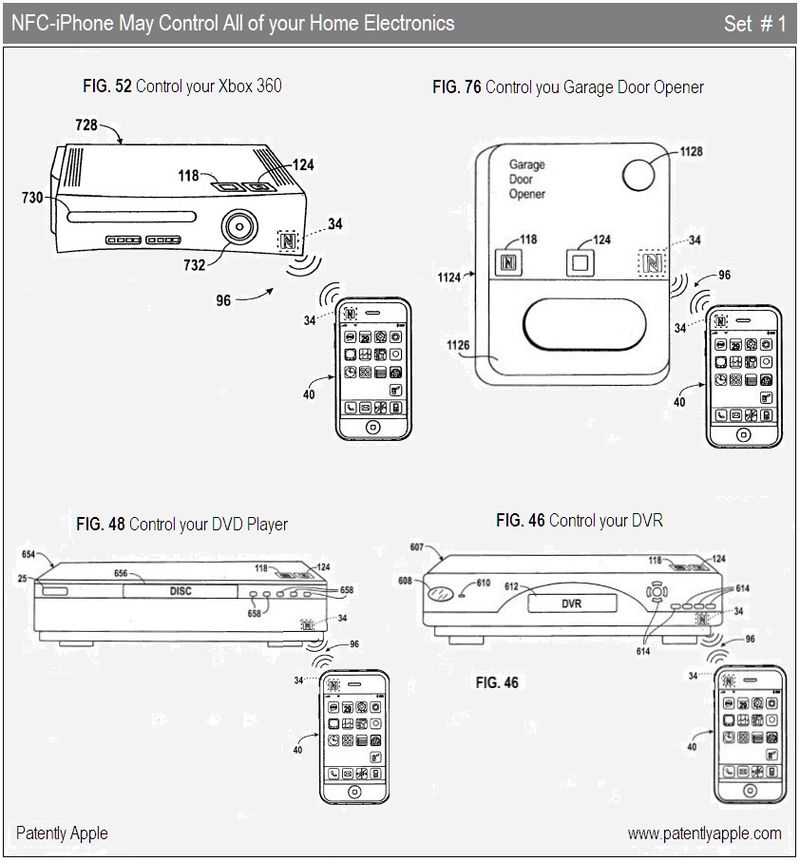 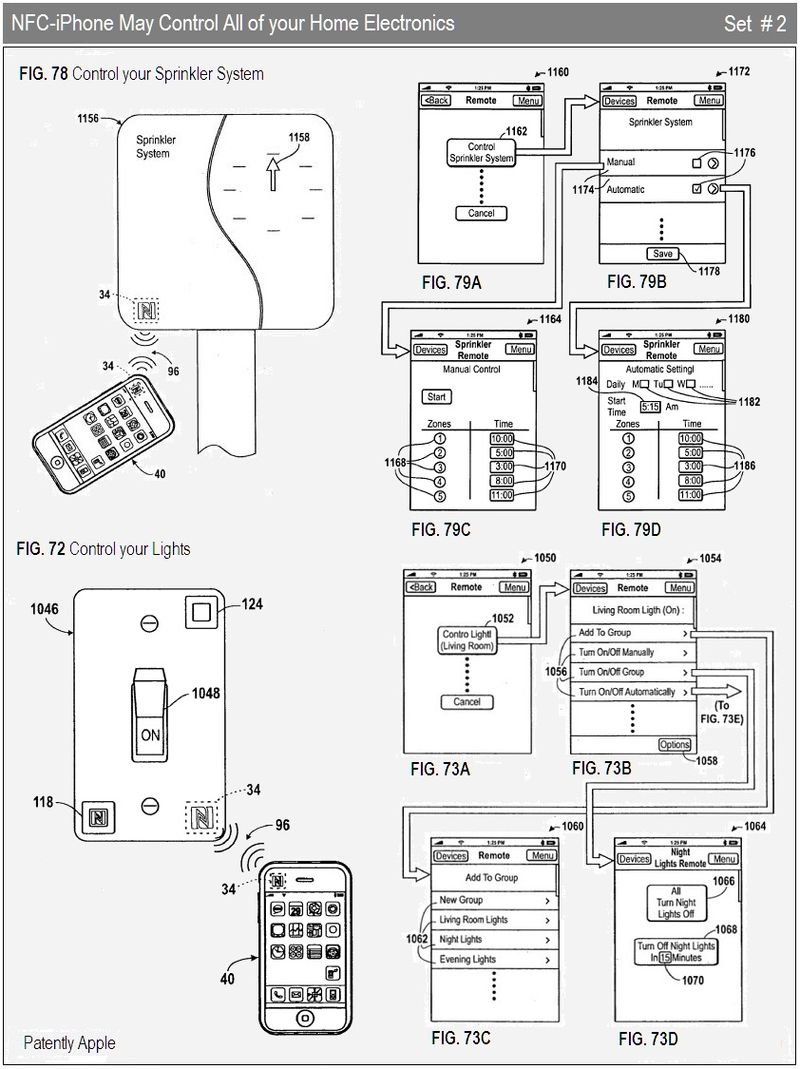 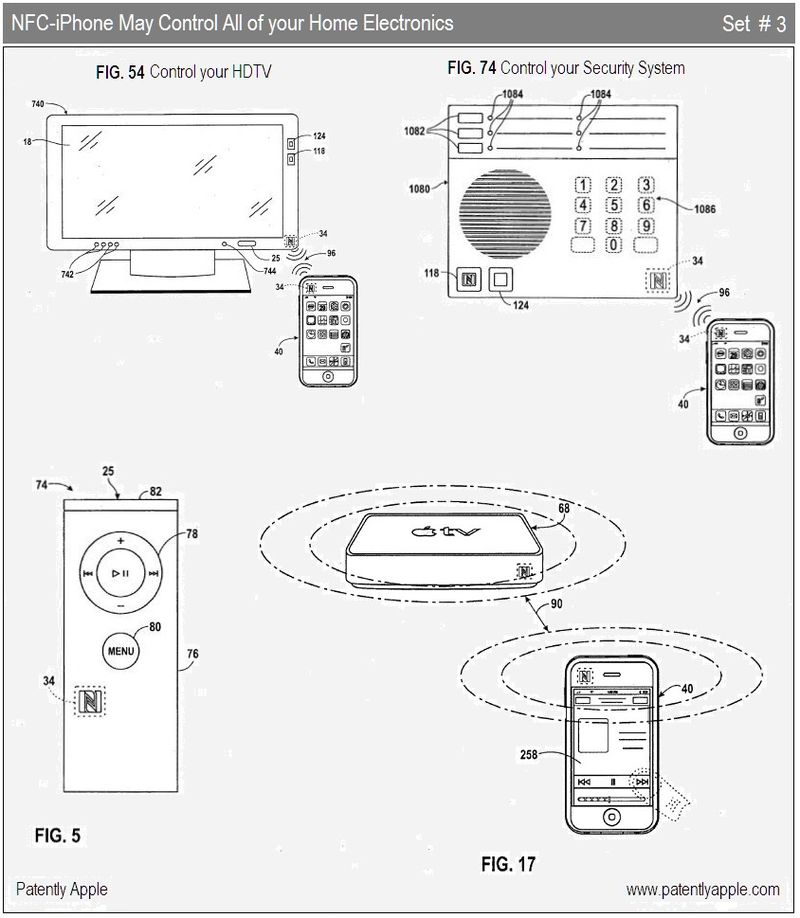 The patent provides us with yet other examples of an NFC-iPhone interacting with a digital camera, another with a projector system, another with a home thermostat and finally one that allows the iPhone to be used as a pointer on a keynote application for reviewing a company's Quarterly Results as an example (perhaps using iWork's Numbers application).

Apple credits Michael Rosenblatt, Gloria Lin, Sean Mayo and Taido Nakajima as the inventors of patent application 20100081375, originally filed in Q3 2008. Another NFC related patent could be found under patent number 20100082784, where we retrieved the office device graphics shown below. Other NFC related reports may be posted in the coming days and/or weeks. 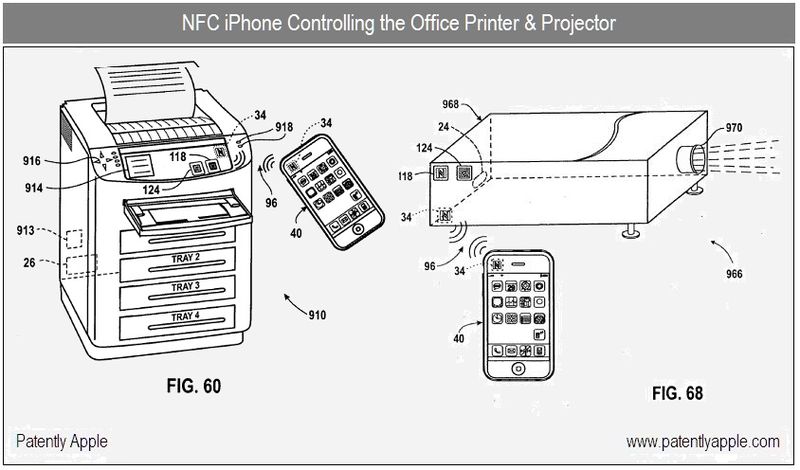 Patently Apple has posted three major reports covering Apple's NFC related patents since January. This now accounts for a total of twelve listed patents for 2010.  I think that It's safe to say that Near Field Communications (NFC) is now a major developing trend in the making. Patently Apple hereby opens a new category covering this sector. See Tech: NFC

NFC will be in all Nokia smartphones in 2011

Fast Company, the magazine, has been following our patent reports on NFC and has written a report on the subject that's very good. Mr. Eaton added that "(there's a picture of an XBox 360 in there for kicks.)."

Well, not really Mr. Eaton. The Xbox 360 graphic is actually an official Apple patent graphic. Every graphic in this report is from the patent in case anyone else was wondering about that.

Here is why this is really BIG (yes all caps) maybe not today, but in 5-10 years.

I know from a friend that NIST (The National Institue for Standards and Technology) is blasting forward with the "smart grid." The Obama administration is pushing this hard.
The smart electrical grid will completely change the way electricty is billed to the average consumer. The price of electricity will fluctuate based on demand (more expensive on a hot summer day, vs. 2am on a cool evening)

So, if the price changes throughout the day, the average homeowner, needs a better way to manange the electrical consumption within a home. I don't even know if Apple knows how important this will be.