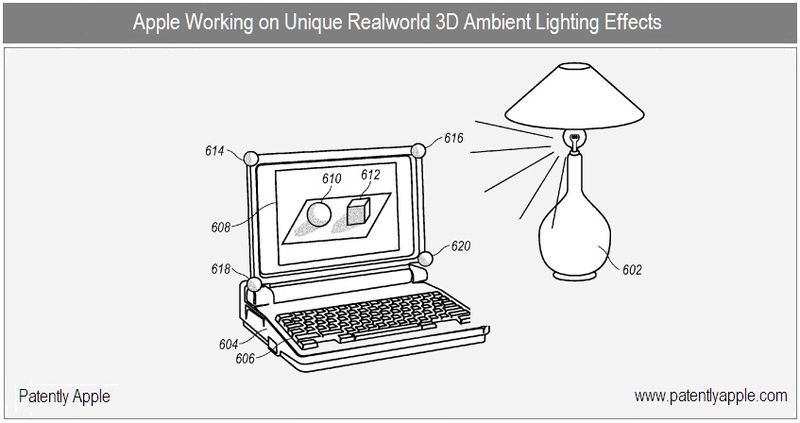 Apple has been working towards a 3D version of OS X for some time. In late 2008 we first learned about a "multi-dimensional" OS and later in December 2009 Apple revealed a 3D version of OS X using head-tracking technology. In today's patent, we get to see another angle that Apple is working on that somewhat relates to their 2008 patent and yet is unique. As the graphic above illustrates, Apple will employ advanced ambient light sensors on their hardware that could interact with surrounding light. In the graphic above, an in home lamp is reflecting on the laptop screen and casting shadows on elements on the display. This is yet more proof that Apple is on track for an advanced 3D OS sometime in the future as hardware adopts more cores. Intel had forecasted at CES this year that Sandy Bridge based systems would kick start 3D internet and advanced avatar creating software in 2011.


It's All About Ambient Light Sensors & OS X

Apple's patent appreciates the fact that imagery is typically presented on display screens of all types. In order to make the images more engaging, it has also been appreciated that if more specific sensed ambient lighting conditions (direction, intensity, color and the like) could be applied to the imagery, those images would be more realistic in appearance, and therefore more natural and pleasing to the viewer. Among other enhancements, characteristics of the imagery could be altered in view of actual ambient lighting conditions around the device. For example, the shading or brightness of the imagery could be made to correspond to the ambient light characteristics around the display screen.

As an example, if a user is looking at a display of a notebook computer positioned on a desk and a lamp is positioned to the right of the notebook (see FIG. 6A below as an illustrative example), it would be much more realistic if imagery on the display such as icons, windows and other graphical user interface elements were adapted to appear as though that shining lamp was affecting their appearance. In this context, the icons, windows and other graphical user interface elements would appear as though the light from the lamp on the desk was actually also shining on them. This could be accomplished by, among other things, altering the shading of the images to add shadow effects away from the light source and to add brightness effects toward the light source.

Apple's patent capitalizes on these lighting-induced naturally occurring effects that users have come to expect in the real world by adjusting the presentation of displayed images in dependence on the sensed ambient lighting conditions about the display screen. Among others, the sensed lighting characteristics could include direction, magnitude and color from multiple light sources that would affect the appearance of objects located where the display screen is positioned. 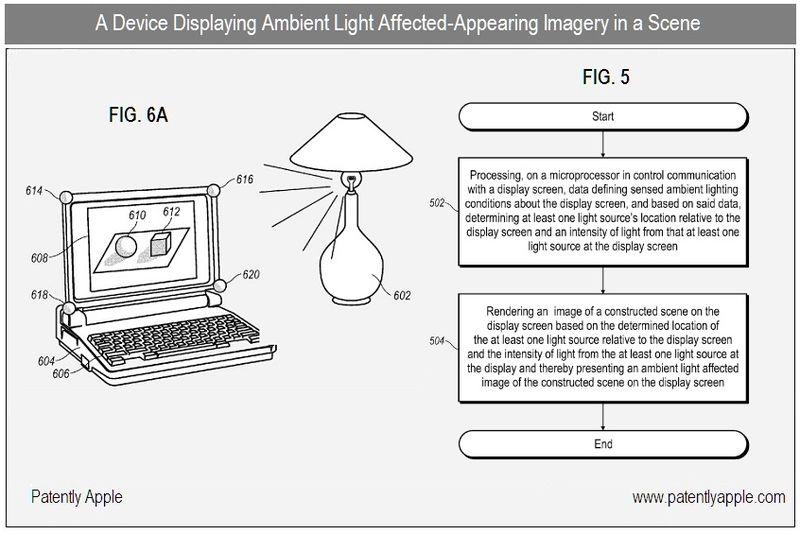 Many modern systems have "GPU" (Graphics Processing Unit) components that, together with software, are used to do accelerated 3D scene rendering as is the typical case for games. This same technology is commonly used in modern graphical environments, such as OS X, from Apple Inc., to provide the rendering of the display for applications and visual effects of the environment and within applications.

Update May 4, 2010 9 AM: It appears that Google is taking the news of a future Apple 3d OS pretty seriously considering that they just acquired BumpTop on May 2, 2010. Here's a video of it if you've never heard of BumpTop before.

As usual, apple gets distracted with shinny - instead of delivering real added value.

If apple wants to really leverage 3D in the uxp then there is one simple place to start with: Hyperbolic Tree

... and when driven by some serious RDF semantic technology (daml+oil driving the W3C Sparkle query system) then apple would really have something to write home about! That would be a real game-changer ...

but alas, Apple has abandoned osx on the mac :-(