Apple Gearing Up for the Coming NFC- iPhone Revolution 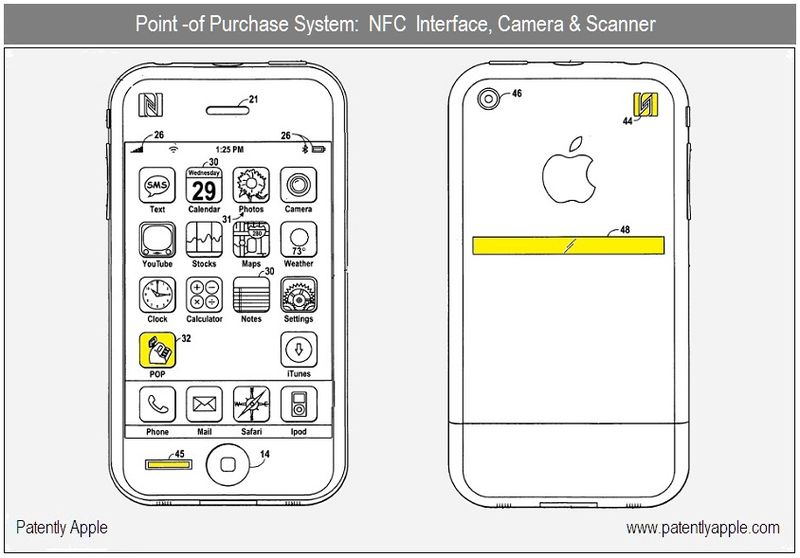 Later this morning Apple will be providing us with a "sneak peek of the next generation of iPhone OS software." While I have no idea whether Apple will reveal their intention to add NFC (Near Field Communications) technology or not to OS 4 today – I'm fairly certain that it's on Apple's future roadmap. How do I know that? I know that because Apple has delivered a barrage of NFC related patents in the last month that could warp anyone's brains trying to get their head around the enormity of Apple's efforts. There have been over a thousand illustrations to review and today you're going to see one of these massive filings in detail. Today's patent relates to an unbelievable Point of Purchase (POP) application that will eventually be adding very sophisticated new functionality to an iPhone: Functionality that will go far beyond just using it for a single POP application. Apple introduces us to an NFC-iPhone that will include a built-in scanner, biometric sensor, added camera functionality and a secondary fingerprint scanner for verifying a user's identity to retailers. This report even provides you with two videos illustrating how it will technically work with a future MacBook and/or Apple-TV as well.


Merchants often use point-of-sale or point-of-purchase (POP) systems to complete sales transactions. Typical POP systems may include several independent devices, each performing a different function. For example, a scanner may ring up articles of merchandise and transmit the amount to a cash register to calculate the amount due. The cash register may then transmit the amount due to a credit card reader to receive payment.


The use of multiple devices often results in an immobile POP system due to device sizes and communication requirements. The fixed location of a POP system also may decrease operational flexibility and create time-consuming sales transactions. Today's fast-paced consumers may be unwilling or unable to wait to purchase merchandise, resulting in lost sales and profits for the merchant.


In todays patent report you'll see that Apple's patent introduces us to techniques for performing sales transactions using an iPhone. The iPhone could be made capable of completing an entire sales transaction including ringing up articles of merchandise, receiving payment information, and communicating with an external server to receive authorization for payment. The iPhone could include input devices, such as a near field communication (NFC) interface, camera, and scanner, for retrieving article information and payment information. The electronic device also may use a device identification networking protocol to establish a communication link with another device in order to receive payment information. A software application of the device may calculate the amount due and may retrieve inventory and price information from the merchant's server.


The iPhone may also include one or more communication interfaces for communicating with the merchant's server over a wireless network, personal area network, near field communication channel, or the like. In certain embodiments, the iPhone may use a smart selection method to determine the most suitable communication interface based on data transmission speed, security features, and other user preferences. The iPhone may also include applications for performing various sales related transactions such as exchanging information for a merchant rewards program, establishing customer financing, and performing returns and exchanges.


Apple's patent FIG. 1 shown below illustrates an iPhone that may make use of the techniques for conducting a sales transaction described above. As illustrated in FIG. 1, the iPhone (noted as patent point #10 throughout the patent) may scan articles of merchandise. The iPhone may also communicate with other devices using short-range connections, such as Bluetooth and near field communication.


The POP Application Icon: when the Point of Purchase (POP) icon 32 is selected on the iPhone (see yellow marked icon in FIG.1) an application for conducting a sales transaction is opened. The application may facilitate sales based transactions such as scanning an article of merchandise, receiving payment information, and retrieving customer information etc. 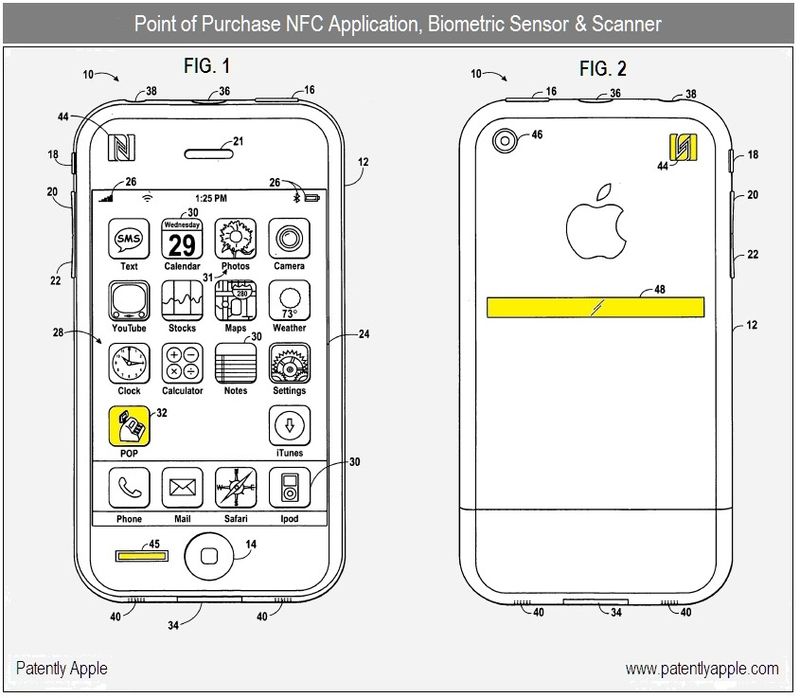 The NFC Device: The iPhone may include a near field communication (NFC) device (noted as patent point # 44) The NFC device may be located within the iPhone's enclosure and have an exterior symbol to identify its location therein. The NFC device may allow for close range communication at relatively low data rates (424 kb/s), and may comply with standards such as ISO 18092 or ISO 21481, or it may allow for close range communication at relatively high data rates (560 Mbps), and may comply with the TransferJet protocol. In certain embodiments, the communication may occur within a range of approximately 2 to 4 cm or 1 to 1.5 inches.

The close range communication with NFC may take place via magnetic field induction, allowing the NFC device to communicate with other NFC devices or to retrieve information from tags having radio frequency identification (RFID) circuitry.

The Biometric Sensor: Information also may be acquired through a biometric sensor (Patent Point # 45 of FIG.1), as for example:


The database may be maintained by the merchant or by a third party service provider.


In Apple's patent FIG. 2 noted above we see that the back of the iPhone has two additional input devices that may be accessed, namely a camera (#46) and a scanner (#48). The location of these inputs may change on any final product.


While we're on the topic of sensors and scanners, we'll now temporarily jump ahead to Apple's patent FIG. 16 where we see a series of screens for acquiring payment information using biometric features. From the payment type selection screen (#198), a merchant may select the biometric selection bar (#200) to display a biometric entry screen (#338). The biometric entry screen includes instructions (#340) that prompt a customer to place their finger on the biometric sensor, shown below as a fingerprint scanner.


If that kind of security feature tends to "creep you out," then be aware that Apple is also considering the implementation of other types of sensors such as face recognition, hand geometry, and/or voice recognition. 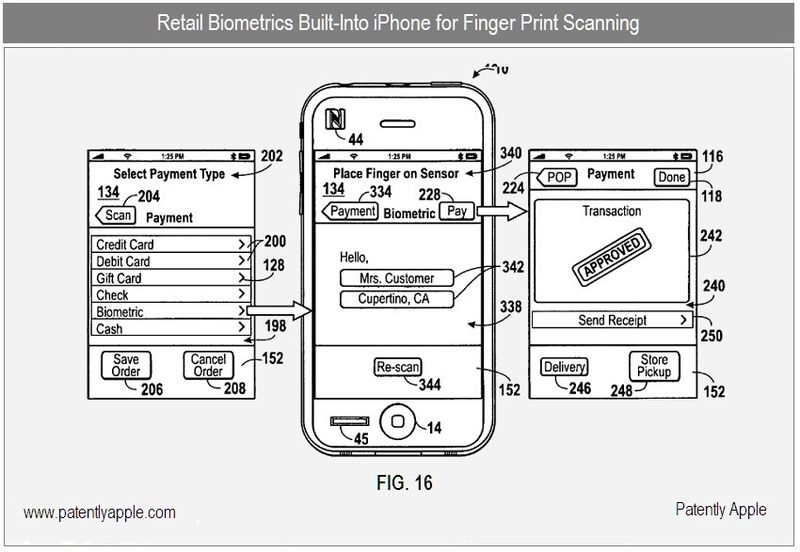 
However, if the information is correct, the merchant may select the pay graphical element (#228) to process a payment based on the biometric feature. For example, a customer may link their bank account or credit card information with the biometric feature stored in the biometric database. In response to selection of the graphical element, the device may query the biometric database for the payment information associated with the customer. The device may then transmit the payment information as described in FIG. 4 to obtain authorization for payment. Once the authorization has been received, an approval message may be displayed on the transaction status screen (#240) within the display window (#242). After completion of the transaction, the merchant may select the POP element (#224) to conduct another transaction. 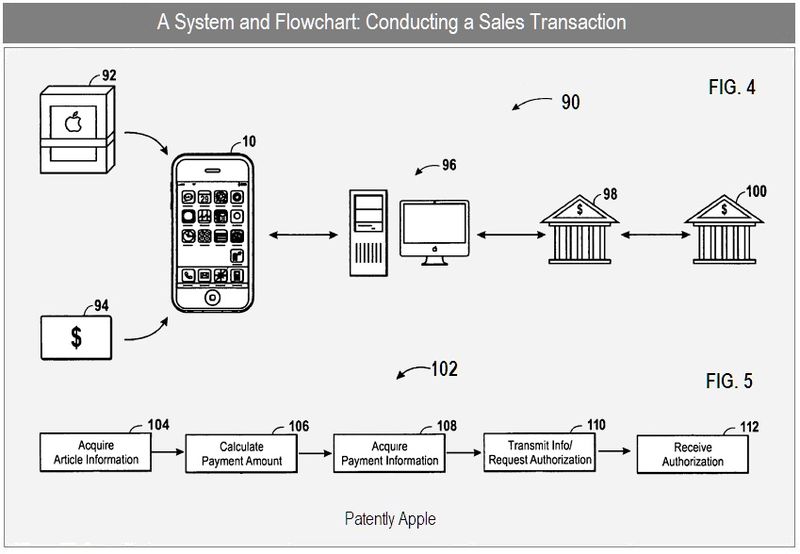 Apple's patent FIG. 4 illustrates a system (#90) for conducting a sales transaction using Apple's iPhone. Due to the iPhone's portability, the sales transaction maybe conducted within a wide variety of environments. For example, the sales transaction may occur near a clothing rack within a retail store, when ordering a pizza at home or when you're on an airplane. For example, when on an airplane, the flight attendant may sell you a snack or when you're home you may pay the pizza delivery guy simply using your iPhone if the merchant is set up with this simple POP system. 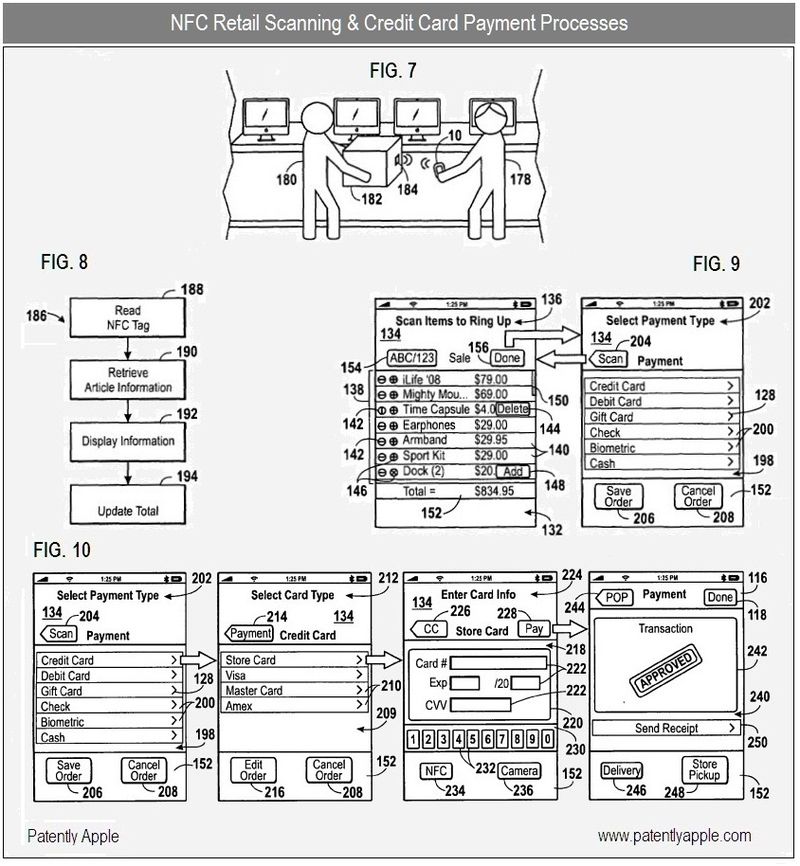 Apple's patent FIGS. 8, 9 and 10 illustrate the various steps taken in any given retail transaction and the various detailed screen options that the merchant will navigate through using their iPhone's POP application. While there are just too many additional detailed transaction centric screenshots to display in this initial report, managers or shop owners interested in seeing more of the potential iPhone based POP system could review this specific patent which is noted below for your convenience. 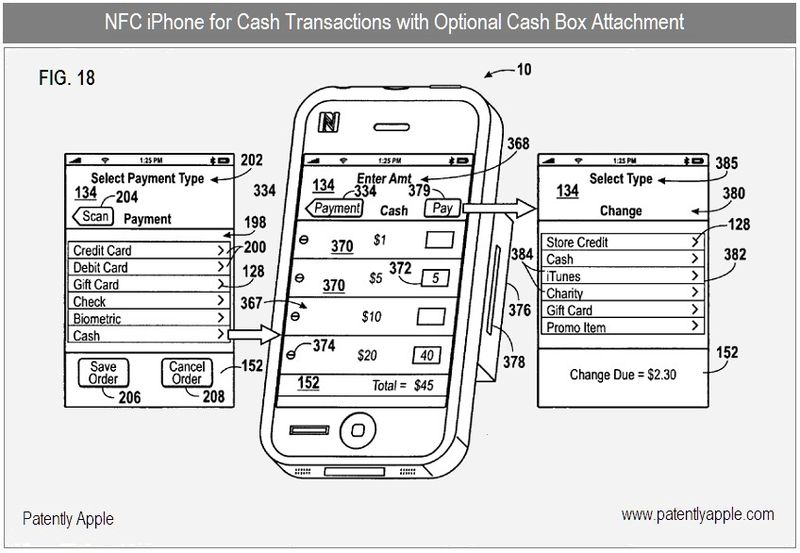 In addition to receiving payment by credit card, check, or biometric features, the iPhone will also be able to receive a cash payment as illustrated in patent FIG. 18. From the payment type selection screen (#198), a merchant may select the cash selection bar (#200) to display the cash payment screen (#367). The cash payment screen includes instructions (#368) that prompt the merchant to enter the amount of cash received using the graphical elements (#370). Each graphical element may correspond to a different cash denomination, such as one, five, ten, or twenty dollars. The patent covers this in extensive detail.


In Apple's patent FIG. 43 shown below we see a system (#920) that may be used to conduct a sales transaction. The system may allow a customer to scan articles and pay for the articles without the assistance of a salesperson. The system also may operate in conjunction with the merchant's security system to impede the removal of unpurchased articles from the store. For example, the articles may include security tags that can be deactivated after payment to prevent an alarm from sounding when the articles are removed from the store. Once again, the patent goes into great detail about the container and process of how this is achieved. 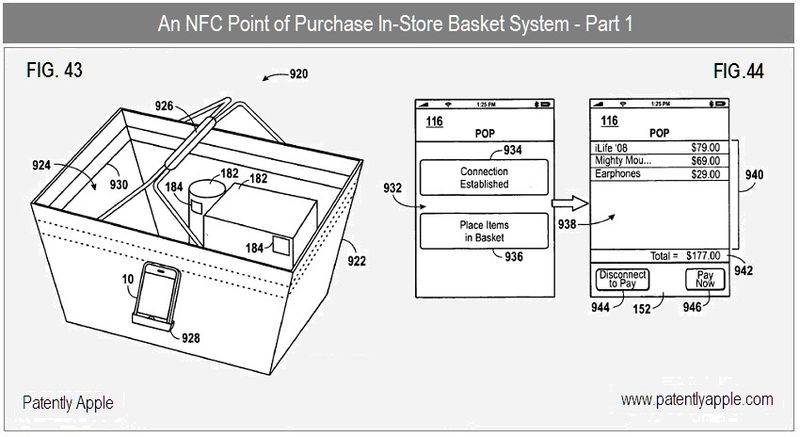 Apple's patent FIG. 47 and 50 shown below illustrate two other systems (#992 and #1030) that may be used to conduct a sales transaction using the POP enabled iPhone. 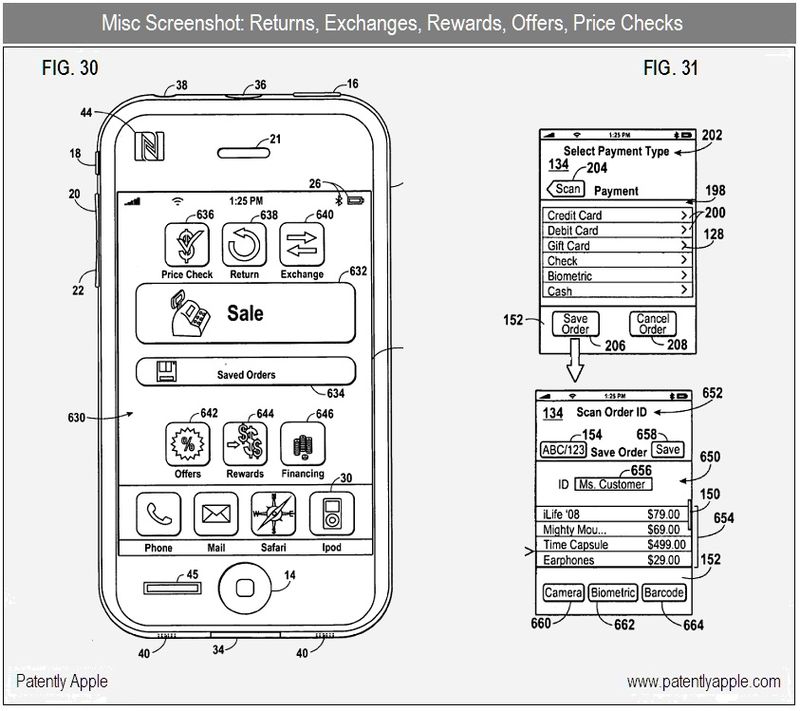 Although the following videos are about of how the rest of the PC world will be using this technology later this year, I don' think you'll have any problems understanding how Apple will be integrated into 2010 MacBooks and the Apple TV for the summer or this fall. Let's just hope that Apple doesn't drop the ball here.


Overview of TransferJet: Video One


(Note that at the 1:34 mark of this video you'll see Toshiba's Apple-TV-like device next to an HDTV illustrating how easy it will be to transfer movies and other content in a snap.)


In November 2009 Patently Apple posted a major NFC related patent which was titled "Apple Developing 'Grab & Go' Application for Life in the Fast Lane." A second Apple NFC related patent on this same Grab & Go theme has been published under patent number 20100082567.


Notice: Patently Apple presents only a brief summary of patents with associated graphic(s) for journalistic news purposes as each such patent application is revealed by the U.S. Patent & Trade Office. Readers are cautioned that the full text of any patent application should be read in its entirety for further details. For additional information on any patent reviewed here today, simply feed the individual patent number(s) noted in this report into this search engine.