Apple's engineers may have struck gold again, if this patent ever goes from paper to marketplace, that is. Even Apple's engineers consider the idea of an iPod or iPhone Smart Device Cover, nothing shy of being a Paradigm Shift in the industry. Don't take my word for it, here's what they actually stated in the patent: "Advantageously, the cover or outer covering according to various embodiments can provide a paradigm shift for electronic device covers, which have conventionally been provided for protection of outer physical surfaces of portable electronic devices. Now, the cover or outer covering can operate as an electrical accessory for the portable electronic device." Today's report provides you with the first in-depth peek at this exciting new concept that will revolutionize the device cover segment of the industry. This report covers everything from the basic mechanics to the functionality right on through to applications that could apply to gaming, texting, video conferencing and even a solar panel version that could have your iPod running many times longer at the beach. And – If you happen to be a BlackBerry die hard, then you just might find the solution you've been hoping for: an iPhone with a physical keyboard. It appears that adding iPhone and/or BlackBerry-like functionality to an iPod could be another hot ticket for Apple sometime in the future. 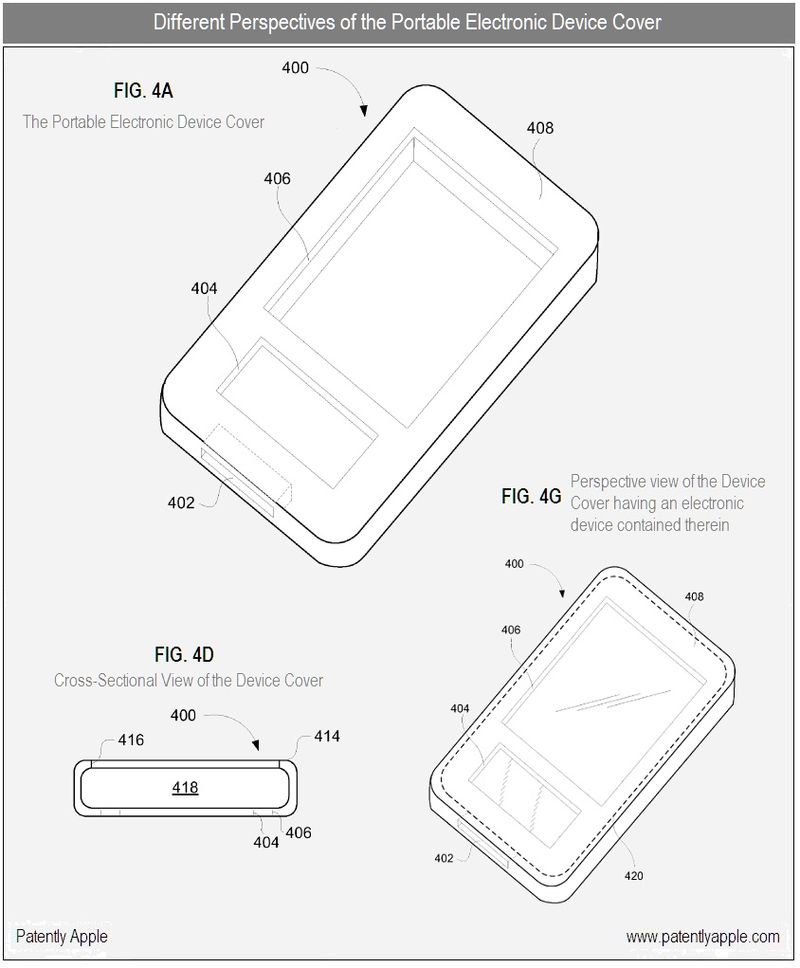 Electrical Skin: As an integrated electrical skin, one embodiment could, for example, include at least a compliant body including a cavity for receiving an electronic device, and one or more electrical components being at least partially disposed within the compliant body.

Active Elements: Here, the cover or outer covering includes active elements that could interact with active element of a portable electronic device. The cover or outer covering having active elements could be considered a smart cover or active cover. In order to be smart and/or active, the smart or active outer cover generally includes one or more electrical components that are carried by the body or member of the electronic cover. In some cases, the components could be discrete separate components that are spaced apart from one another while still maintaining communications there between (e.g., wires, traces, flexes). In other cases, at least a portion of the components could be grouped together onto a single carrier such as a printed circuit board, flex circuit, rigid flex, subassembly or electronic enclosure. These components may be embedded and/or surface mounted. Several of the components will be described in detail below.

Force Sensors: In one embodiment, a cover is formed from a compliant material such as silicone rubber (silicon rubber). The cover could include one or more force sensors embedded within the cover or applied to an inside surface of the covering. The one or more force sensors could be configured to measure or detect force being applied thereto through deformations in the compliant material of the cover. The area around the force sensor may further include tactile features that help define the location of an input area. The tactile features may, for example, be ridges that surround the border of the sensor.

Illuminated Bezel: In one embodiment, a cover may also include a display bezel disposed around one or more edges of an opening in the cover. The display bezel may include one or more display components, such as LEDs, LCDs and/or other light sources. The display bezel may also include a variety of optical components such as diffusers, light guides, light pipes for distributing light from a light source to the display bezel for illumination thereof. This type of system may be used to extend the feel of a primary display of the portable electronic device. Hmm, this one may be headed for a smart design cover for a future iPad.

The Mechanics of the Smart Device Cover

That could mean that the gaming controls could be positioned on the backside of the device cover so as to not limit the iPhone/iPod touch's larger viewable display area. In fact, patent point 136 confirms this by stating that "a cover includes a built-in touch surface on its back surface. In one implementation, the touch surface substantially matches up with a display screen of a portable electronic device on the opposite side." The patent's FIG. 10A would appear to be relating to that of an iPod Classic that is positioned sideways.

To make this crystal clear, the patent, under point 126, specifically states that the "keys may be a keyboard such as a QWERTY keyboard. The patent is describing a physical keyboard. The series of keys may also relate to a telephone layout (e.g., numbers, *, #). Also see patent FIG. 16B below for an alternate version of this. For BlackBerry fans, or should I say CrackBerry fans (as they're known as), having this option could be a game breaker.

The phone cover could include an opening or transparent window that provides viewable access to a display screen of the portable electronic device. The phone cover may also include an input area that at least designates a keypad region. The keypad region may include a keypad with integrated mechanical or electronic actuators or alternatively it may include visual and/or tactile elements that utilize an input device of the portable electronic device.

In one example, the tactile elements are configured to engage an input device disposed on the portable electronic device. The input device may, for example, be a touch wheel/button found on some iPod devices. The keypad region generally includes number keys and # and * keys found on most phones. The keypad region may also include a talk or enter button. Other phone related buttons such as speaker and mute may also be provided. In one implementation, the keypad is arranged in a matrix or rows and columns. In another implementation, the keypad is arranged around a circle similar to old rotary telephones. The tactile features may be recesses or protrusions. In one example, the tactile features are depressible bumps. 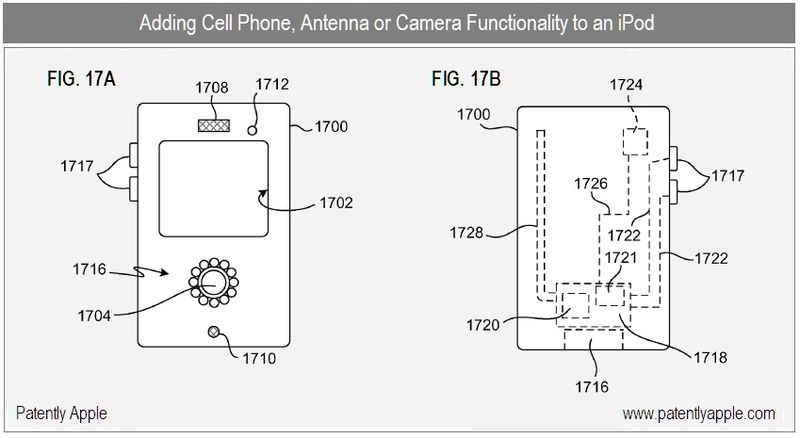 In patent FIG. 17A noted above, we see a diagram of a front surface of another cover which could provide the user with various UI components to adapt the portable electronic device to operate as a mobile telephone. In this example, the cover could include a plurality of buttons (1706) that are provided around the opening. The buttons permit the user to enter inputs to the portable electronic device like a rotary-style phone featuring a tactile feel to denote each button. The cover could also include a speaker (1708) and a microphone (1710).

In patent FIG. 17B we see a diagram of a back surface of the cover (1700) illustrated in FIG. 17A. In this embodiment, the back surface does not include any user interface components. However, in general, the back surface is eligible to include user interface components. In this embodiment, the back surface has various electrical components embedded therein. In particular, as illustrated in FIG. 17B, the cover includes a connector (1716) that facilitates electrical connection of the cover. The camera (1724) provides the cover with image capture capabilities. The one or more electrical conductors (1726) serve to electrically connect the camera with the substrate (1718). The antenna (1728) is coupled to the substrate and serves to support the wireless circuitry (1721) with transmission and reception of wireless signals.

Video Conferencing: In one embodiment, the patent states that "the cover could include a camera (e.g., video camera) on its front surface. The camera may enable video/online conferencing or chatting via a handheld electronic device."

The Apple engineers credited for this patent include Quin Hoellwarth, who was recently credited for Apple's Video Headset Project patent, and Brett Alten, who was credited for a July 2009 patent covering an iPhone Adaptive Navigation System. The patent was originally filed in September 2009.

Must see to believe this really works and flawlessly without hitches but thanks for the fantastic substantive report.