An Apple Patent May Hint at a Mini Tower Desktop with USB 3.0

Maybe if we hold our breath until we turn blue Apple may actually deliver what appears to be that of a new mini tower personal computer. A Mac Pro is clearly classified as a Workstation. This unit continually describes itself – without a doubt – as a modular based "personal computer." The new outer design presents rounded corners and shock absorber stand pads. The internals of the tower design resemble that of Apple's full tower – so it's hard to distinguish between the units. Apple also introduces us to a new USB 3.0 and DisplayPort combination connector for personal computers and media players. If Apple actually delivers on a new lusty mini tower, there's going to be a lot of very happy Macites loudly applauding Apple for finally listening to their faithful core base.

Sophisticated personal computers are developing at a rapid rate, and there is an ever-present demand for improved appearance, speed, functionality, and reliability in the newest personal computers. One area that sometimes lags behind in the field is the ability of users to have increased flexibility in upgrading and building their own personal computing systems. While various hardware components, such as monitors, speakers, printers, disk drives, hard drives, memory units, peripheral component interconnect ("PCI") cards, and the like tend to be easily interchangeable for a home user, other hardware components are not so modular. For example, many traditional home computers are manufactured with a central processing unit ("CPU") or two that tend to be permanently affixed to a backplane, motherboard or other base printed circuit board ("PCB") in the computer. Such an arrangement tends to represent the permanent "heart" of the personal computer, with any desire to upgrade the CPU(s) and/or base PCB usually requiring the acquisition of a new computer.

Another area where modularity can be somewhat difficult in personal computers is with respect to PCI card arrays. Many PCI cards have a retention tab integrated along one edge of the card that is used in conjunction with a board-side retention arm to lock the card in place on its respective PCB when installed. Such a retention tab and arm arrangement helps to keep the PCI card installed and in place during vibrations, drops, or other sudden movements of the computing system. In many instances, however, these manually operable retention arms are difficult to access for a user that wants to replace a single PCI card in a tightly arranged array of installed PCI cards. As such, users often must resort to removing one or more adjacent PCI cards in order to access the retention arm mechanism to unlock the PCI card that they actually want to replace. Such a process can be cumbersome and unduly lengthy, and can subject desired components that are installed but must be temporarily removed to unneeded wear and risks.

Another issue that arises as the modularity of a personal computer increases is the ability to measure accurately the temperatures of various internal computer components. For example, many hard drives and other basic items are permanently built into a respective motherboard/CPU arrangement. Under such circumstances, it is fairly easy to build in a permanent thermocouple or other temperature sensing arrangement to monitor the temperature of such permanently affixed hard drives and other items, such that appropriate application of fans and/or other cooling techniques can be applied as needed. A permanently installed temperature sensor can benefit from direct contact with the housing of an operating hard drive or other component, as will be readily appreciated. When such hard drives and other components are modular (i.e., removable and replaceable), however, then the ability to measure accurately the temperature of these devices is complicated.

While many designs for aiding in the modularity of personal computers have generally worked well in the past, there is always a desire to provide new and improved designs or techniques that result in even more modularity options for such personal computers. In particular, various desired improvements can include increased modularity for base CPUs and related components, easier removal and secure installation of PCI cards located within closely spaced arrays, and the ability to accurately measure the temperatures of removable components in personal computers, among other features and enhancements.

It is an advantage of the present invention to provide improved features for a personal computer. These improvements can include an increased modularity for primary CPUs and related components in a personal computer, easier removal and secure installation of add-in cards located within closely spaced arrays and/or the ability to accurately measure the temperatures of removable components in personal computers, among others. This can be accomplished at least in part through the use of modular personal computer tower having removable and replaceable CPU/DIMM modules, a more comprehensive hardware component retention system, and/or temperature sensors that are spring loaded to facilitate direct contact with removable computer components. In particular, the more comprehensive hardware component retention system can include a locking component that is adapted to lock or unlock simultaneously a plurality of computer add-in cards or components.

Apple's patent FIG. 1A shown below appears to be illustrating a new tower design and perhaps, may I pray, a mini tower – with smooth rounded corners that Apple continually refers to as a "personal computer" in contrast to the Mac Pro definitely being classified as a workstation. Yet the internal design somewhat resembles the Mac Pro's design.

The exemplary desktop personal computer is illustrated in side elevation view. Personal computer 100 can include an outer housing 101, a front area 102 having one or more ports for peripheral devices, one or more shock absorbing pads or stands 103 and a logo or other mark 104. The personal computer could be a tower-type computer that is common for personal use in home and office environments, and can have increased modularity over other computers.

Continuing with patent FIG. 1B, the exemplary desktop personal computer of FIG. 1A is shown in side elevation view with portions of the housing removed therefrom. With at least a side panel removed to expose the interior of the personal computer, three main internal regions 200, 300, 400 of the computer can be seen. CPU/DIMM module region 200 is the lowermost region, PCI zone 300 is the center region, and hard drive region 400 is the uppermost region of modular personal computer 100.

The CPU/DIMM Module: one or more trays or shelves 201 can be adapted to support and remove together with an entire core CPU and associated DIMM modular system 200, such that these components can be readily serviced, replaced and/or upgraded by a user, as may be desired. As shown, the personal computer comprises a dual core CPU system, with two CPUs (#202) and a plurality of accompanying slots (#203) for associated DIMM cards. The entire CPU and DIMM arrangement can be a single modular unit that pulls in and out of place from its respective region on the personal computer. A suitable board and socket mating arrangement (not shown) can be utilized to mate the CPU/DIMM module 200 to a motherboard 301 or other primary circuit board, so as to facilitate communications between the CPU/DIMM module 200 and the rest of personal computer 100.

The PCI Zone: a plurality of PCI card slots or sockets 302 can be mounted to motherboard 301 or another circuit board in a suitable pattern, such as in a substantially parallel fashion. Motherboard or backboard 301 can be a primary circuit board for personal computer 100, and can extend into each of primary zones 200, 300, 400, as shown. Rather than utilizing a typical "hockey stick" plastic tab arrangement on each individual socket to lock an individually installed PCI card in place on a socket 302, a more comprehensive component retention mechanism 303 can be installed. Some portions of component retention mechanism can be positioned in front of motherboard 301, while other portions can reside behind the motherboard. In addition, component retention mechanism or system 303 can be used to lock and unlock all installed PCI cards simultaneously, such that the removal and installation of PCI cards is made easier than via traditional techniques. 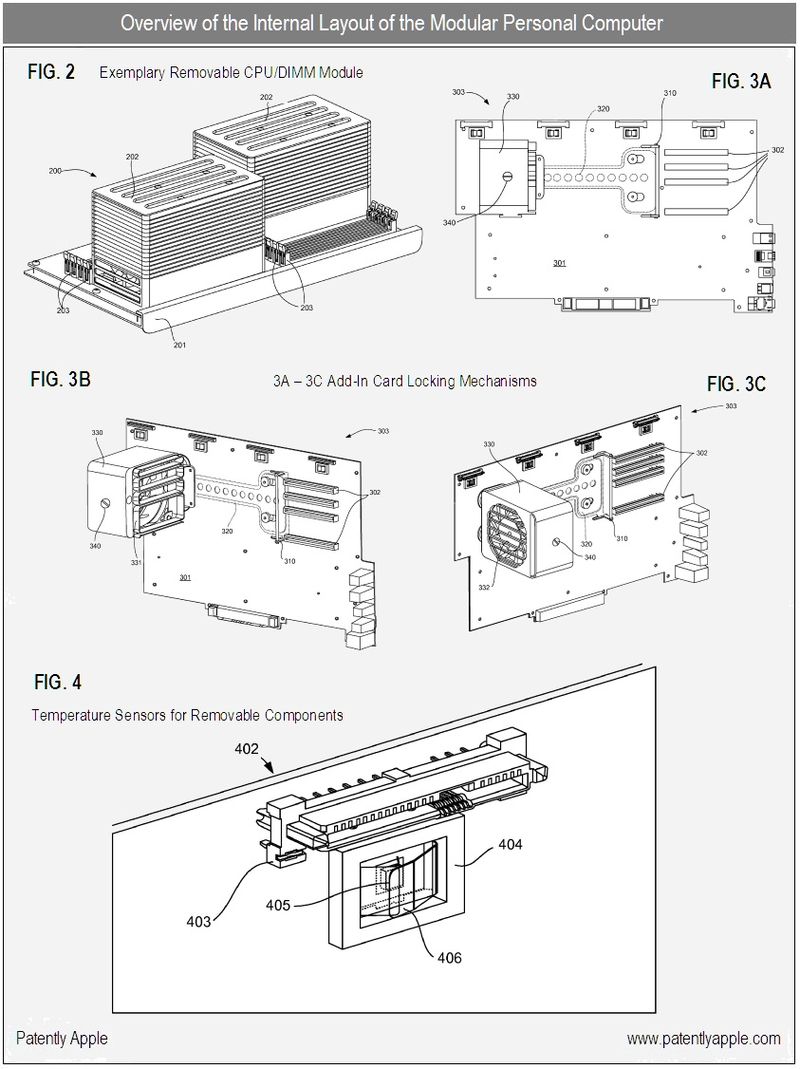 What would go with a brand new mini-tower modular personal computer? Well - How about a new combination USB 3.0 & DisplayPort connector. Until Light Peak arrives, it's the next best upgrade over USB 2.0. In Apple's patent FIG. 3A shown below we're able to see a perspective view of a receptacle connector (#350) that can carry multiple high-speed data signals. FIG. 3B is a block diagram illustrating the transmission of DisplayPort and USB 3.0 signals between the receptacle connector and a male plug connector 300.

However, these and other new standards are often tough to satisfy. Problems with cross-talk and signal integrity often arise. These problems can arise when a standard is implemented using a connector specialized for that particular standard, and are further complicated when signal lines from various standards are combined into one connector, such as in connectors 300 and 350.

In some embodiments, connectors 300 and 350 can provide support for USB 3.0 (USB3) and legacy USB 2.0 (USB2). In one embodiment, the connectors include two USB2 contacts, four USB3 contacts, and a USB power and a ground contact. The USB3 standard is specified to transfer data at a "Super Speed" of 4.8 Gbps. An impedance of 90 ohms plus and minus ten percent needs to be maintained at this frequency to meet the USB3 specification.

The new combined USB 3.0 and DisplayPort connector will apply to desktops, keyboard, other peripherals and Apple media players as illustrated below in patent FIG. 1. 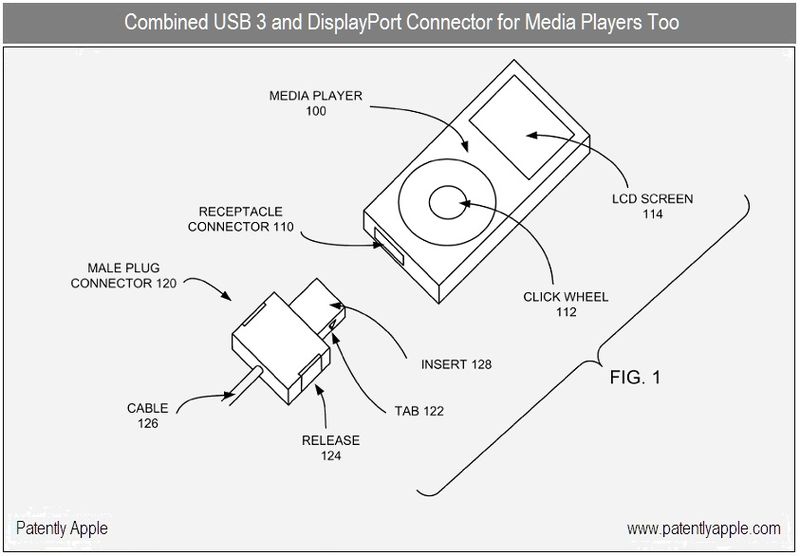 [Apple] would not get rid of their 30 pin connector for the ipod for a standard usb 3. They would not change display connectors yet again. Not likely.