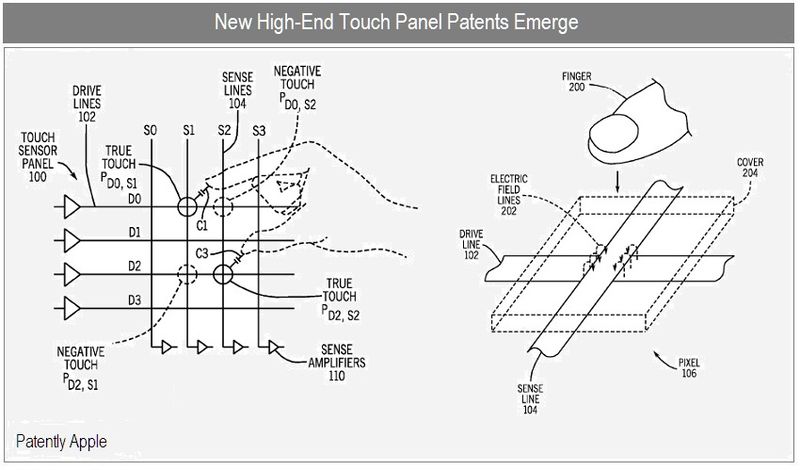 In another excellent report filed by Philip Elmer-DeWitt of Fortune earlier this week about Apple's high tech war against handset makers supposedly infringing on Apple's multi-touch IP, he quotes Oppenheimer's Yair Reiner stating that "Our checks also suggest that these warning shots are meaningfully disrupting the development roadmaps for would-be iPhone killers. Rival software and hardware teams are going back to the drawing board to look for work-arounds. Lawyers are redoubling efforts to gauge potential defensive and offensive responses. And strategy teams are working to chart OS strategies that are better hedged." Well, Apple isn't standing still either boys-and-girls and yesterday the USPTO published yet another round of new highly sophisticated multi-touch panel patents that will reverberate in the war rooms of Apple's competitors around the globe. Gentlemen, behold - this is only the beginning of the patent wars.

Touch sensor panels can, in some embodiments, be formed from a matrix of drive lines (e.g., row traces) separated by a dielectric material from a plurality of sense lines (e.g., column traces), with sensors or pixels created at each crossing point of the drive and sense lines. Touch sensor panels can alternatively be arranged in any number of orientations or dimensions, including, but not limited to, diagonal, concentric circles, spiral, three-dimensional, or random orientations. In order to detect and identify the location of a touch on a touch sensor panel, stimulation signals are provided to the drive lines causing the sense lines to generate signals indicative of touch output values. By knowing the timing of the stimulation signals to specific drive lines relative to the signals read out of the sense lines, processor(s) can be used to determine where on the touch sensor panel a touch occurred.

When the object touching the touch sensor panel is poorly grounded, touch output values read out of the sense lines may be erroneous, false, or otherwise distorted. The possibility of such erroneous, false, or otherwise distorted signals is further increased when two or more simultaneous touch events occur on the touch sensor panel.

Apple's patent generally relates to multi-touch sensor panels that utilize an array of capacitive sensors (pixels) to detect and localize touch events, and more particularly, to the correction of pixels having distorted readings when touch events are generated by a poorly grounded object. 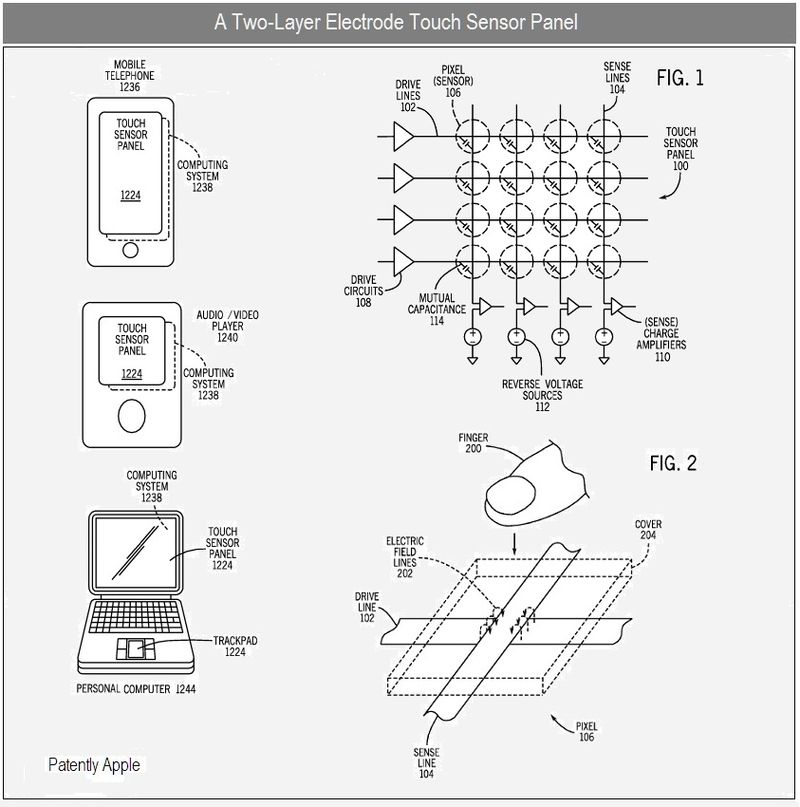 Apple's patent FIG. 1 illustrates an exemplary touch sensor panel 100. The touch sensor panel includes an array of pixels 106 that can be formed by a two-layer electrode structure separated by a dielectric material. One layer of electrodes comprises a plurality of drive lines 102 positioned perpendicular to another layer of electrodes comprising a plurality of sense lines 104. The pixels 106 (also referred to as sensors) can be formed at the crossing points of the drive lines and sense lines, with each of the pixels having an associated mutual capacitance 114 (also referred to as coupling capacitance).

To sense touch event(s) on the touch sensor panel, each of the drive lines can be sequentially stimulated by the drive circuits, and the sense amplifiers detect the resulting voltage values from the sense lines. The detected voltage values are representative of pixel touch output values, indicating the pixel location(s) where the touch event(s) occurred and the amount of touch that occurred at those location(s).

Apple's technology, as noted in the patent figures above, applies to Apple's iPhone, future Classic or nano model iPods and future notebook-tablets that incorporate a multi-touch display. If you're a glutton for punishment or happen to be one who dreams in electric mathematical equations, then you could read more about Apple's patent using this temporary link. Apple credits Marduke Yousefpor as the sole inventor of patent application 20100060608. Also see our related report that was published in January 2010. 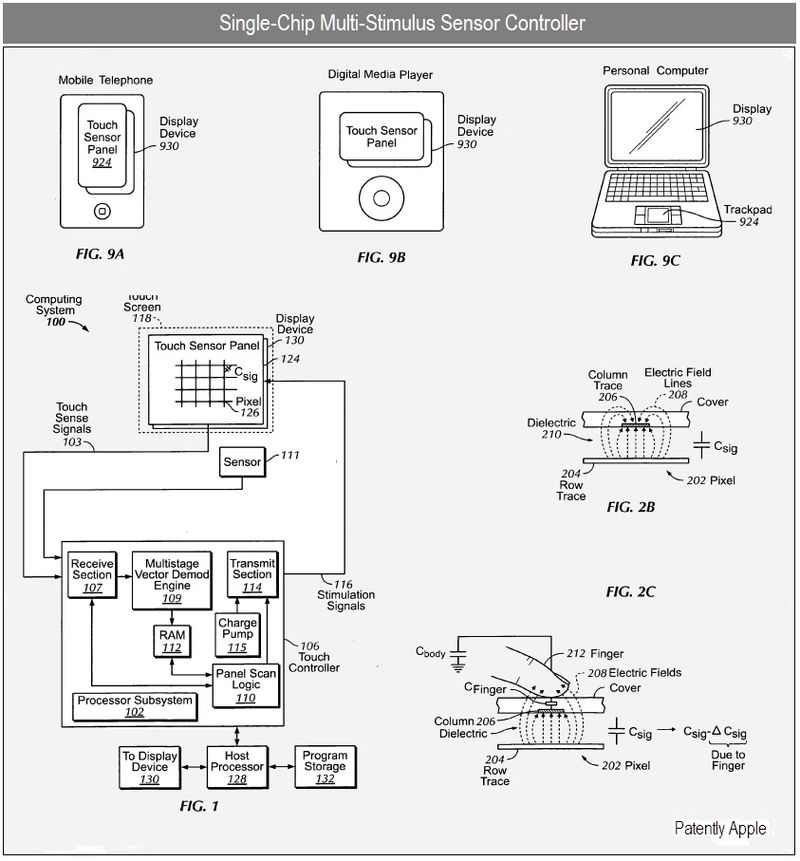 With Apple's law suit against HTC reportedly shaking their faith in Google and Whiny former Sun CEO recently whinging on about Apple threatening Sun over their Looking Glass OS, we now see Battleship Apple going on the offensive and will continue to do so going forward. This isn't the last we'll hear of Apple's legal actions – that's for sure. In truth, the patent wars have only begun.


Please note that any of the temporary links presented in today's report are in fact temporary and may redirect you to unrelated patents in the future. In such cases refer back to the search engine instructions above.