Solar Powered MacBooks May be in our Future 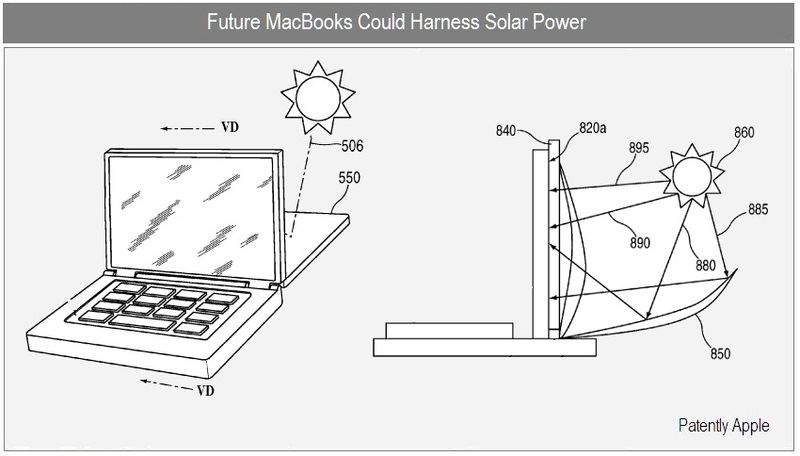 This is definitely the year of the environment at Apple.Beyond their initial push,Apple's patents began to reflect their new position. On January 14, we presented Apple's Smart-Home Energy Management Dashboard System and then a week later we reported that Apple Thinks Green Again with Solar Cell Panels for Media Players. Well, Apple is at it again - and this time they're focusing on a light harness that could be an accessory that magnetically attaches to the backside of a future Macbook or could be engineered right into the Macbook using a translucent component. This way when you're outside enjoying the sun at a park or by your tent side, you'll be able to draw power from the sun and cut down on draining your battery. Apple is also considering using solar cells. It may look a bit goofy in the patent, but we all know that the finished product will be slick: That's for sure!

Schematic Overview of a Notebook with a Light Harness Component

Apple's patent FIG. 1 is a simplified schematic diagram of an electronic device 100 in accordance with some embodiments of the invention. 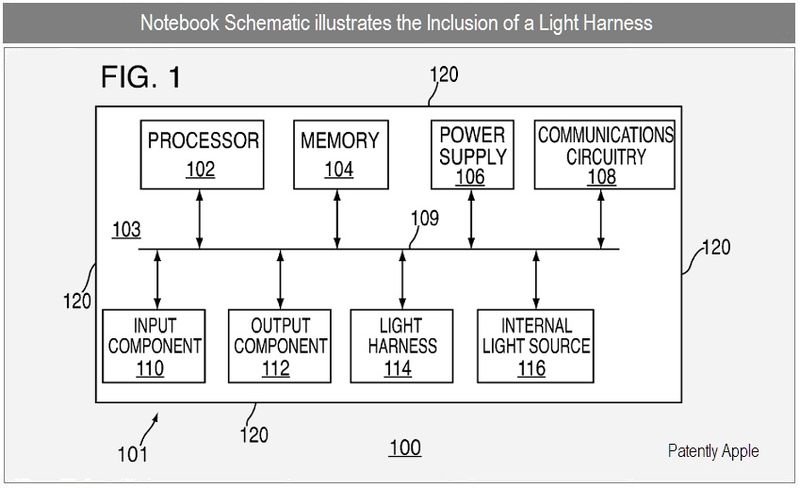 The most important aspects of FIG. 1 in context with this patent is the light harness noted as illustration point 114 which may be provided to capture light external to a notebook to channel the light for illuminating output component 112.

Also noteworthy is a twist to the power supply 106 noted above being that beyond the normal use of batteries, a future notebook may also be configured to generate power from a natural source (e.g., solar power using solar cells).

About the MacBook Reflector

Apple's patent FIGS. 5A is a conceptual MacBook that may include a reflector 550, at least a portion of which may be coupled to device 500 adjacent or to the rear of display screen 520. Reflector 550 may be used to reflect light when in a closed position. A portion of the reflector may adhere, snap, or be held magnetically to the notebook such that the reflector may be positioned along the rear of the display screen in a closed position. 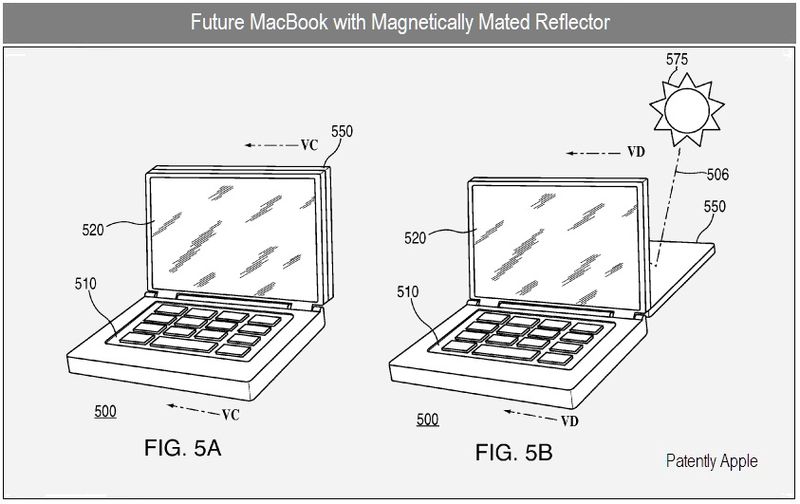 When exposed to an external light source, such as the sun (575), the reflector may collect light emitted by the sun's ray 506 and redirect the ray or rays toward display screen 520. Portion 551 of reflector 550 may be released to rotate away from the display screen using any suitable means, such as by pressing a button or using a wrist flick motion similar to that used to open a cellular telephone.

As an example of usage, a notebook owner may decide to go outside to use their notebook. The sunlight may not be sufficient to power the notebook's display initially and so the user could rotate the notebook's reflector downward into an open position to collect more sun rays to power or illuminate the display.

MacBook with Back Sided Translucent Surface

Apple's patent FIGS. 7A and 7B shown below illustrate a side view of a notebook which may be similar to the one shown in FIGS. 6A and 6B above, but with a translucent surface repositioned with respect to a reflector in accordance with some embodiments of the invention. Reflector 850 could be detachable from the notebook or otherwise repositionable with respect to screen 820.

Apple's patent FIG. 7B shows a side view of the notebook with reflector 850 in an open position. It should be noted that the patents states that "the translucent surface may also serve to protect the rear face of the display screen from damage."

Apple's patent FIG. 3A shown below illustrates a perspective view of a light harness (e.g., a manifold) in accordance with some embodiments of the invention. 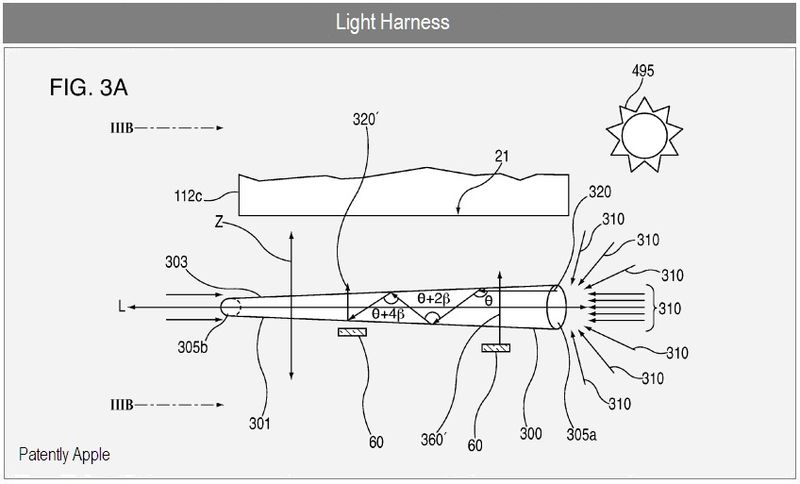 Notice: Patently Apple presents only a brief summary of patents with associated graphic(s) for journalistic news purposes as each such patent application and/or grant is revealed by the U.S. Patent & Trade Office. Readers are cautioned that the full text of any patent application and/or grant should be read in its entirety for further details. For additional information on any patent reviewed here today, simply feed the individual patent number(s) noted in this report into thissearch engine.

I had a PowerBook 1400 back in the late '90s for which I bought a solar panel that slid into the cover. It could be used separately too as it had suction cups to attach it to an airplane window, for instance, and a long cable that would enable one to be in the shade and the panel in the sun.