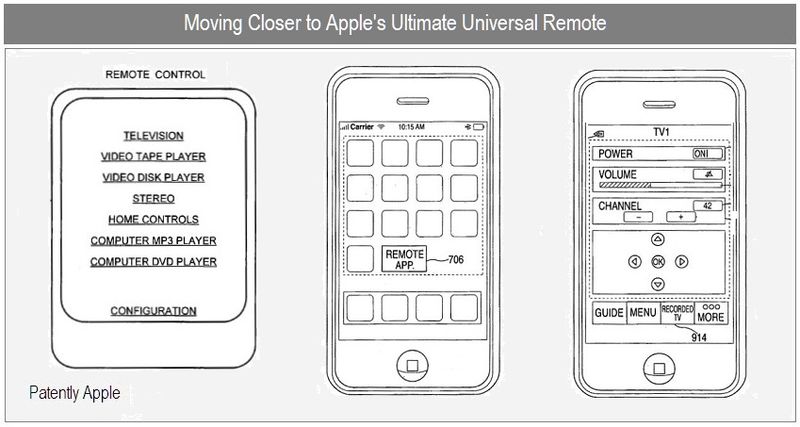 The USPTO was down for most of last Thursday, which made it very difficult to access Apple's latest patent applications. One of the reports that we were able to post was in regards to Apple TV's remote controller. Yet hidden within the patents that we weren't able to access - was a little gold mine. After careful scrutiny of this patent over the weekend, let me tell you, Apple has some great ideas in mind for their Remote iApp. Better yet - Apple's patent presents us with a unique overview of a future version of Apple TV that we perhaps hoped for from the very beginning and disappointingly never received. All we can hope for now is that Apple delivers this next generation Apple TV for at least Christmas this year. C'mon Apple – make it happen!

Apple has been trying to create the ultimate universal remote in their labs for several years now. In fact, the first of three patent figures in our cover graphic above is from one of their 2007 patents on the same subject. In this report, we'll show you some of the great things that Apple is dreaming up in respect to Apple TV and a universal remote that is starting to really take shape: A universal remote that may finally have some real meaning beyond just controlling our iTunes content. Where's the beef? Well here it is – and a whole lot more!

On one hand, Apple's patent basically relates to portable electronic devices and more particularly to systems and methods for saving and restoring scenes in a multimedia system. What is a scene? A scene includes the states of one or more components in the multimedia system. States of components that could be captured in a scene can include, for example, the states of lights (e.g., whether they are turned on or off and their brightness levels), the states of speakers (e.g., volume level and balance), media that is playing on a media playback application, metadata associated with the media that is playing, or any other suitable states.

On the other hand, the patent provides us with just enough punch to know that Apple TV is about to rock'n roll.

Apple's patent FIG. 5 shows a simplified block diagram of an illustrative multimedia system based on components that could be controlled by a portable electronic device. In this example, we see that the remote will control a "living room scene" that includes a TV, a set-top box/Apple TV and a home stereo and/or home theater system. 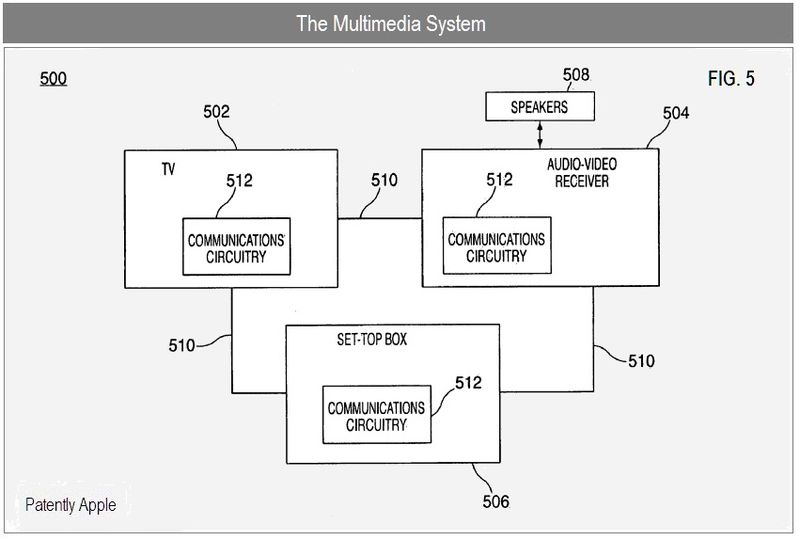 Apple's multimedia system, as described, includes a number of revelations. Although the patent brushes over this fact quickly, the fact remains that Apple TV will be able run applications beyond iTunes, such as "email, web browsers, programming guide applications or game networks…" Yes, we can easily see that Apple's iPad will also be able to work in sync with Apple TV which is likely to run to the same operating system in the future.

The patent reveals that visual content such as a television program could be received from a cable provider. In some embodiments, component 502 can include a television tuner. Technically, an iMac with a televsion tuner would be considered a TV.

The mention of a TV Tuner is a big surprise because the patent gives you the impression that Apple TV could simply use one of the HDMI channels on your HDTV - and in effect, hijack the television. There's also the remote impression that Apple could employ Blu-ray in Apple TV being that one of the forms of memory is an optical drive. The only optical drive that would make any sense in this application – is Blu-ray. This would allow Apple to offer Blu-ray in one unit, useable on other devices in your home such as an iMac or MacBook etc. It would also allow your iMac to offer television without adding it to the cost of the iMac - being that the TV tuner could be in the Apple TV unit. This has a lot of potential

Although Apple's key universal remote screenviews below are almost self-explanatory, here are a few highlilghts. FIG. 8 illustrates that the remote will control a full range of devices: TV, Sound, Computers and Miscellaneous for such things as smart-home automation features such as controlling lighting, a fireplace and likely a smart-home energy management dashboard. 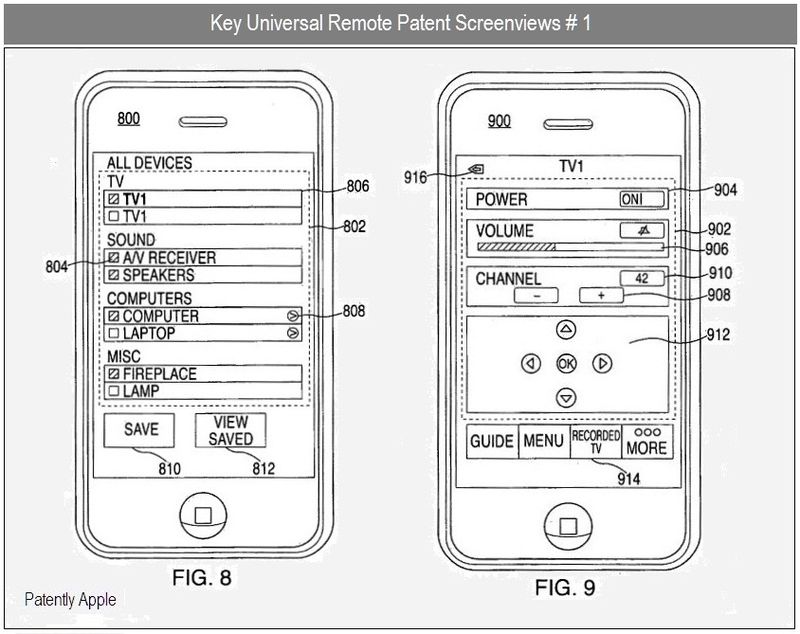 Apple's patent point # 59 specifically mentions game networks (think OnLive, as an example) and the screenview of FIG. 14 below confirms this and also phrases it differently by including game station – which could be hinting at Apple working with one of the major gaming console makers. Apple's patent FIG 12 illustrates a screenview covering rooms or "scenes" with devices that the remote would have control over. Parents would be able to remotely control what their children's bedroom TV could or could not have access to, for instance. 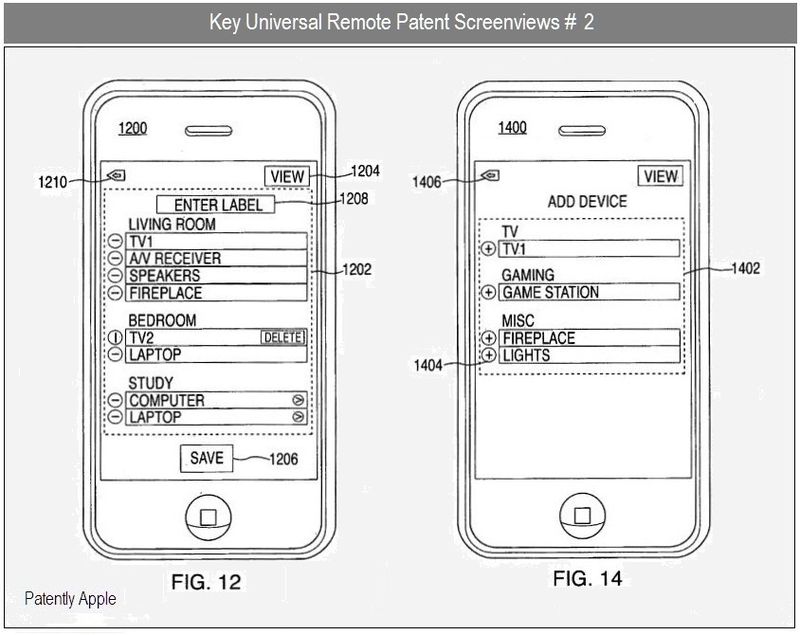 With Apple TV on tap to run games from gaming networks, Apple's November 2009 patent now has a context for patent figures 9B and 9C shown below using Near Field Communications. 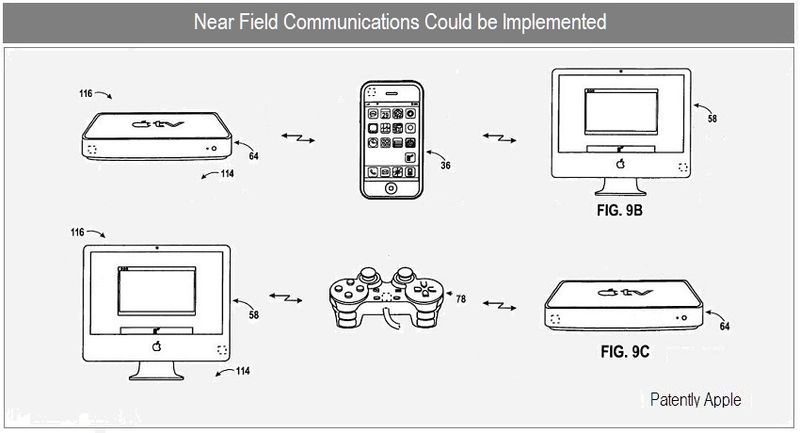 Below are a series of other screenviews that the patent covers. Apple's patent FIG. 21 for example is unique because it's about giving the user control of the setting of a particular scene. Meaning, if you start playing a horror flick, the unit could be programmed to lower the lights a certain amount and set your home theater to certain settings automatically. Another setting you'll see below under FIG. 17 is Romance Night. When you have your hot date come over, just turn on your smooth tunes or movie while the lighting dims and the fireplace automatically lights up: Slick. 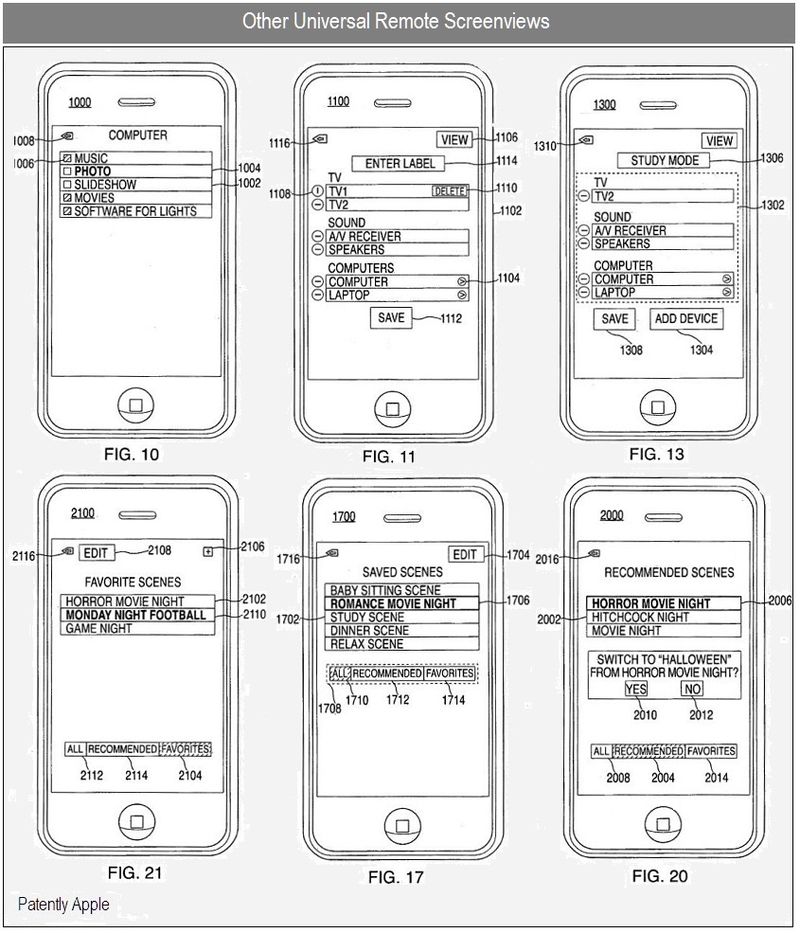 And lastly, the patent provides us with a hint that Apple TV could, at some point in time, include cellular telephone communications protocols. That would hold some interesting scenarios indeed, but I think that such a feature is a little too down-the-road.

The bottom line is that a future version of Apple TV will run applications like Safari and iWork as well as access kick-ass games over a gaming network and finally deliver us with access to real television with a full TV Guide and ability to record our shows like a DVR. Now that's what Apple TV should have been on day one. Late or not, we'll take it!

Apple credits Alan Cannistraro as the sole inventor of patent 20100052843.

Reference: The older universal remote graphic shown as the first graphic in our cover graphic above, comes from Patent 20070176820.

Update – March 8, 2010 3:50 PM Mountain Time: News from game developer Valve: The Kirkland, Washington-based developer went on to note that it now considers the Mac as a "tier-1 platform so all of our future games will release simultaneously on Windows, Mac, and the Xbox 360." Further, Valve also intends to release game updates for Windows and Mac editions simultaneously. In fact, Mac and Windows users will intermingle in online matches, playing and communicating on the same servers and game lobbies.

What about the long lusted after Apple Tivo marriage?

Hey Marc - yes it would be very interesting if Apple was working with DirecTV or Dish (or any PayTV company really) to produce a DVR solution. I wonder if there's more scope working with a satellite TV company than a cable TV company?

I almost see News Corp getting in bed with Apple for FTA TV, worldwide payTV networks, newspapers, and magazines... could be an interesting combination. But News Corp no longer owns DirecTV does it?

My bet is both DirecTV and Dish are vying for the next AppleTV VDR solution.

Apple has an ability to find a need and address that need with a solution no other company has considered. There are millions of homes with 3 or 4 remotes in the living room (including one from the cable company) because nobody wants to look at the big picture.

I think that a truly universal remote sold separately would outsell the IPhone.

@Tom - Blu-ray will never happen on Apple hardware, wireless is the future of video.

Maybe like many times, we need to take Jobs' quote on not interested either with a pinch of salt, or with an analytical eye. Technically a computer with a TV tuner could be considered a TV, but it's more like an iMac that does TV, than a TV that does OS X.

Makes sense for the ATV to fit into the puzzle by enslaving the TV for the user's needs.

Would Apple let the Apple TV go blu-ray without updating their other hardware?