On March 11, 2010, the US Patent & Trademark Office published two very interesting patents that illustrate Apple's R&D teams are rapidly advancing the notion of an audio user interface for Apple's media players and iPhone. The technology as discussed many times in the past, will allow motorists to control their iPod content via voice commands. Voice commands will naturally extend to controlling your content while your media player is sitting in a dock in your office or TV room. Today's second patent, which we'll begin with, presents us with yet another twist to the design of a new portable universal docking station.

Patent: Dock with flippable connector: Apple's patent generally relates to a portable dock which includes a moveable connector which allows connection to any iPhone or iPod. Generally, the connector moves between a closed position and an open position where the connector is placed in at least one substantially upright position for receiving a handheld electronic device. The connector may be hidden from view or lie flush relative to the body of the dock, thereby making the dock more portable and easily organized with other objects, e.g. in stacking. Various motions can be used to move the connector. Examples include one or more rotations, translations, and/or the like. Various retention mechanisms may be employed to retain the connector in an open position when connected to the media player. Also, various electrical mechanisms can be used to couple the movable connector to a fixed printed circuit board (PCB) contained inside the body of the dock.

Apple revealed a new revolutionary styled universal dock back in December 2009 which appears to have some commonality to their latest futuristic version of a portable docking station. It's pretty clear that Apple's R&D teams are looking at new ways of reinventing the docking station – but just haven't nailed it yet.

While they're thinking about redesigning the docking station, now is the time for you to make a comment below on what you'd like to see in a new docking station.

Patent: Multi-Tiered Voice Feedback in an Electronic Device: Apple has long been working on an audio user interface for their media players. Some patents date back to 2003 and further. More recently in 2008 an Apple patent surfaced that revealed voice commands were not only coming to the iPod and iPhone but Apple TV as well. It was later confirmed in 2009 that one of Apple's leading voice technologists/engineers was working on voice commands for Apple TV.

This current patent of Apple's once again illustrates that Apple is working diligently on a wide scale of audio user interfaces and this time we're beginning to see the refinement of their user interfaces clearly relating to the iPod. In fact, just yesterday, another Apple patent discussed engineering voice commands right into an exercise routine program.

In respect to Apple's current invention, we see that it's directed to providing multi-tiered voice feedback in an electronic device.

Apple's patent FIG. 3 below - is a schematic view of an illustrative queue of "speakable items" for playback associated with the display of FIG. 2. In the example of FIG. 3, queue 300 may include list 310 of speakable strings to speak successively. Each speakable string, as part of a view, may be associated with a speakable tier, identified in corresponding column 340. Using the elements from display 200 (FIG. 2), the speakable strings may include iPod string 312 having Context tier 342 and Music string 313 having Focus tier 343 (e.g., the menu item identified by the highlight region is the only one spoken). 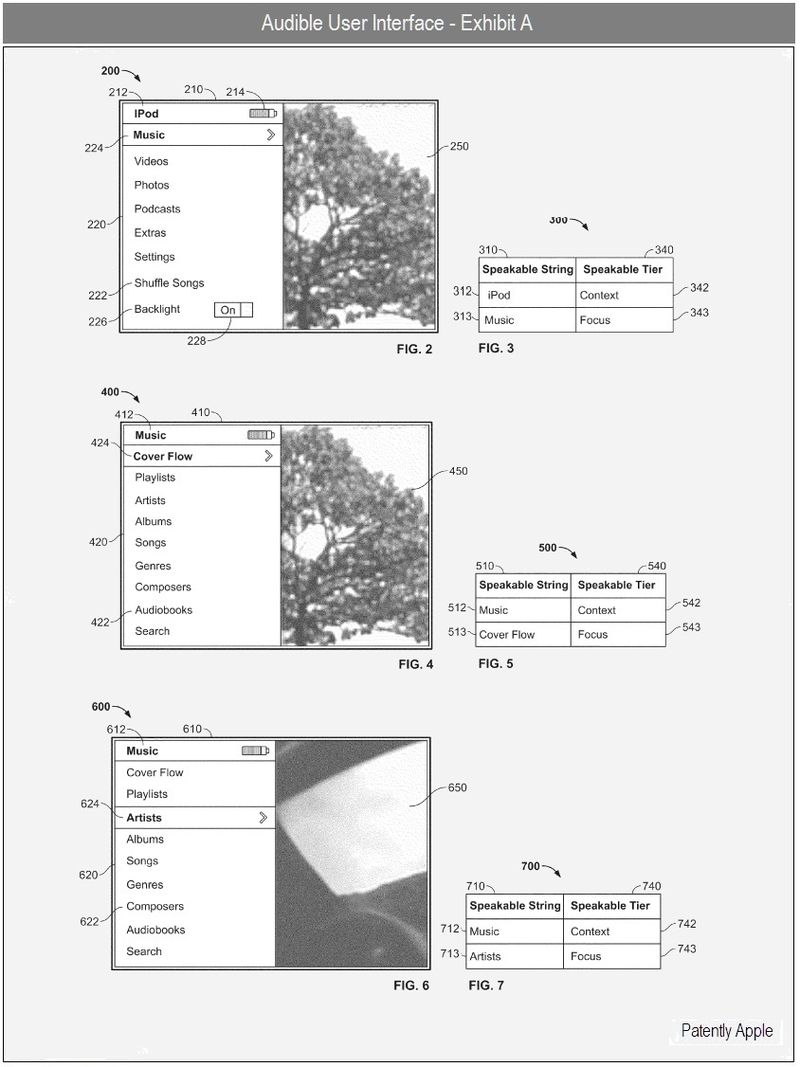 In implementations in which all menu items are spoken (e.g., and not only the menu items identified by a highlight region), the speakable strings may include a Videos string, a Photos string, a Podcasts string, an Extras string, a Settings string, a Shuffle Songs string, and a Backlight string, for example all having Choice tiers (e.g., a tier below the Focus tier of Music string 313).

In addition, because the Backlight option may be displayed with an associated setting, queue 300 may also include an "On string" associated with a Properties tier, which may be spoken after the Backlight string is spoken. In implementations in which only the highlighted option is spoken, the electronic device may assign a Focus tier to the Backlight string and a Choice tier to the On string in response to detecting that the highlight region has been placed over the Backlight option in the menu. The electronic device may identify audio files associated with each of the speakable strings (e.g., using a hash or database) and successively play back each of the identified audio files in the order set by queue 300.

If you pay attention to what is listed in any of the Speakable String Boxes in Exhibit A or B, you'll notice the trend. There must first be a context that directs the media player followed by a Focus. So this is simply what category you wish to call up. Just think of the way that you navigate manually on your iPod and you'll see that you will choose a category like Music, then Playlists and then drill down from there. The same is true for an audio user interface. It may take some practice getting used to the specific sequences we naturally perform with our thumbs - but after a couple of weeks we'll all find in natural. 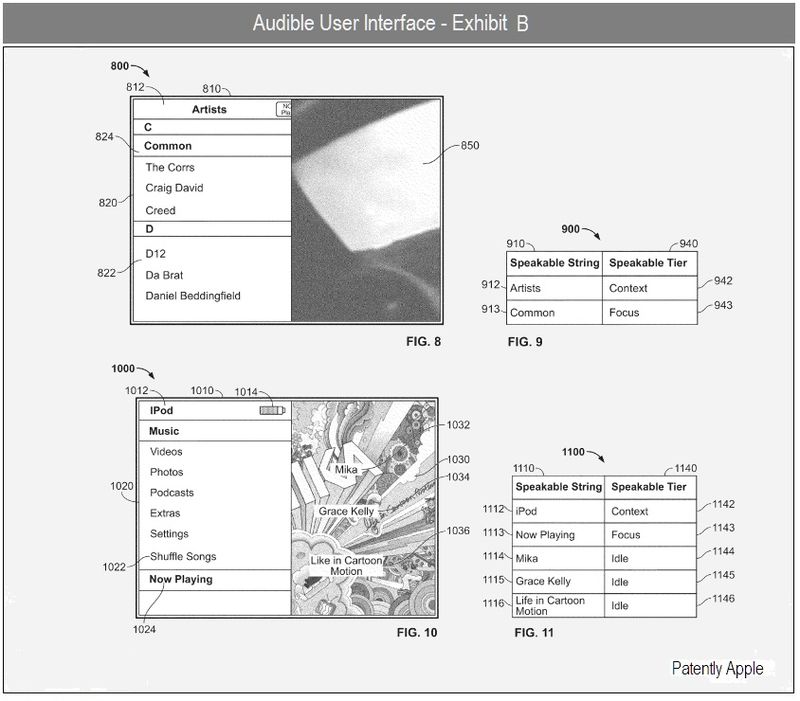