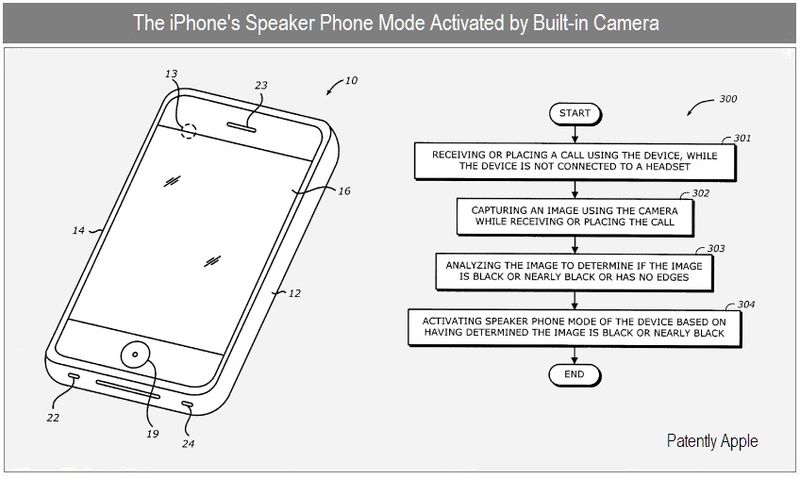 It would appear that one of Apple's R&D teams have been assigned with the project of coming up with new ways to utilize the iPhone's built-in camera beyond simply taking photos. Last month we were clued into an innovative concept that will help users control their incoming calls and voicemail by simply swiping their finger over the external camera lens. It detailed rewinding and fast forwarding voicemail in addition to enhancing one handed navigation of web pages, documents or your iTunes library – by once again, swiping the camera lens in different swiping motion combinations. In today's patent, we're presented with the idea that we'll be able to train the iPhone (or perhaps a future iPad) to automatically turn the speaker-phone mode on under specific conditions like when you're driving a vehicle or busy working on your computer. The camera is trained to understand both lighting conditions and your common surroundings so as to know when your speaker phone should or could be activated. If you're a busy executive, then this may be the answer you've been looking for. For now however, it's simply an R&D project.

Taking the Speaker-Phone to the Next Level

For example, a user who is busy working on a computer at the office could leave their cellphone on their desk and manually activate the speaker phone to receive calls. Using the speaker phone, the user is able to carry on with his work on the computer etc.

In another example, a user who is driving a car needs to operate their cellphone in a hands-free manner. Accordingly, the user can manually activate the speaker phone on their cellphone and place the device at a proximate location such as, for example, in the cup holder. In this manner, the user could have a cellphone conversation in the car while operating the car using both their hands.

In today's patent, we discover that Apple wants to advance their iPhone's speaker-phone mode to the next level by adding smart technology to the iPhone's camera via a series of sensors (such as ambient light and/or movement sensors). These sensors would be coupled to the iPhone's built-in camera allowing it to understand both specific lighting and/or familiar camera shot conditions to trigger its auto speaker-phone functionality.

In one embodiment, the real lighting conditions in the environment surrounding the device is determined by measuring the ambient light intensity using one or more ambient light sensors (ALS). The camera circuitry may include an ALS that may be separate from or integrated with the focal plane sensor. The device may also have an ALS that is not associated with the camera circuitry directly.

In some embodiments, the ambient light data may indicate very low levels of light. A lack of ambient light in addition to a determination that it is daytime (e.g., by checking a clock function of the device) indicate the device may be in a dark environment such as inside a purse or coat pocket. Accordingly, such data points could be combined to decide that the speaker phone mode not be activated.

The iPhone will be able to be trained to recognize different conditions or environments that are acceptable for the auto speaker-phone mode to operate under. The device may be effectively "trained" to recognize when it is placed flat or nearly flat against a surface top of any color such that it would be desirable for the speaker phone mode to be automatically activated.

In yet another embodiment of manual training mode, the user could teach the device about situations where speaker phone mode should not be automatically activated. For example, the user could place the device in its holster attached to her belt. This might be a situation where the user would not want speaker phone mode to be automatically activated for an incoming call, because she would like to first determine the caller's identity, e.g. through caller ID information being displayed on the screen during the incoming call.

The user would then actuate the shutter button one or more times, to capture images of the scene before the camera lens. Each of these captured images would then be associated with speaker phone mode status being disabled. They would then be added to storage in the above-mentioned library or catalog. Using the catalog, the device could then determine whether to activate the speaker phone mode in any given situation.

In another embodiment, the accelerometer may be used to further confirm that the device is located in a car such that the speaker phone mode should automatically be activated. For example, if the captured image matches a previously stored image of the interior of the car, and the data output by the accelerometer indicates that the device is moving faster than a human being is able to run, the device will determine that it is likely that the user is driving a car. Accordingly, the device may, in that case, automatically activate the speaker phone mode.

If the data output by the accelerometer indicates that the device is moving faster than a human being is able to run, the device may check for exceptions. For example, if the user is riding the bus or a train, it is not desirable to automatically activate the speaker phone mode. The library or catalog of previously stored images may include images captured while the user is on public transit. These images may include images of the seats or windows on the train. Accordingly, if the captured image matches such images in the library or catalog, the device may not automatically activate the speaker phone mode. 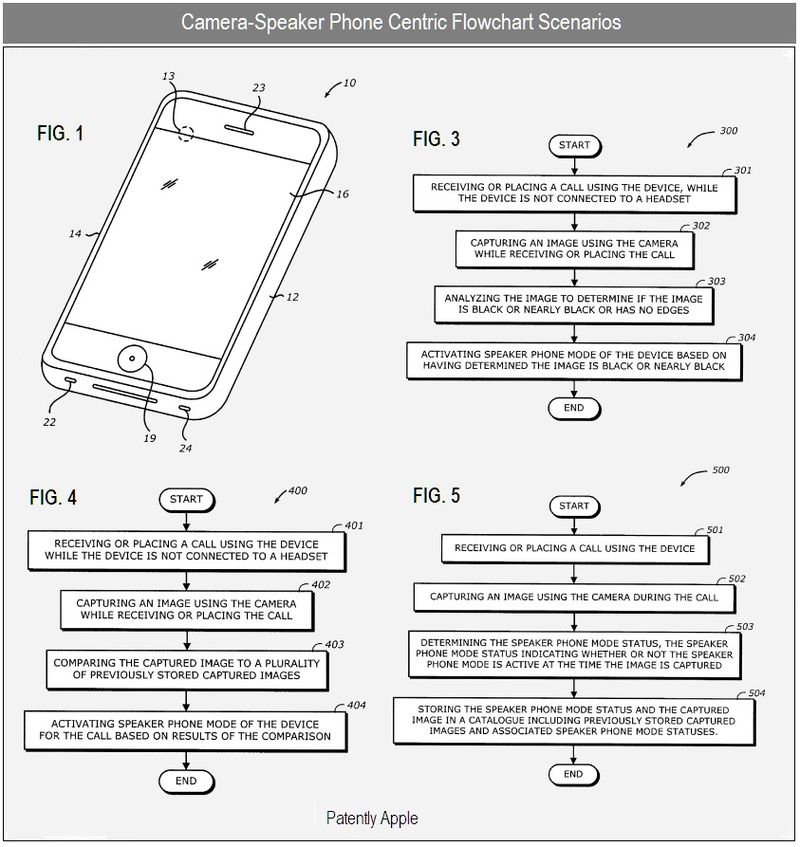 Some electronic devices, such as laptop computers and cellular telephones, may be equipped with an ambient light sensor to support a variety of control functions, such as to adjust keyboard backlighting or display brightness. Some electronic devices may also be equipped with an infrared sensor for receiving infrared signals from, for example, a remote control. Infrared signals intended for the infrared sensor may interfere with operation of the ambient light sensor and cause the device to operate improperly. Thus, an ambient light sensor is needed that can suppress noise from infrared sources. Apple lays out their solution under patent 20100072351.