Just prior to Apple's debut of the iPad in January, they were granted a major patent for a Proximity Detector for Tablets. Today, history appears to want to repeat itself by granting Apple major patents just five days prior to the official iPad launch. This patent is a whopper being that it covers accelerometers specifically in tune with multiple applications relating to games, maps, 3D Surround Sound speakers and more. Apple's second major win is for utilizing multiple broadband antennas for the iPhone and iPad 3G. Someone in Cupertino is smiling this morning – that's for sure.

Accelerometers are devices widely used for applications as diverse as vibration monitoring, appliance control, joysticks, industrial process control, space launches, satellite control, and many others. For example, an accelerometer has been used in a vehicle as sensor to detect a variety of operating conditions while the vehicle is moving.

Apple's patent FIGS. 5A shown below is a diagram illustrating exemplary movements of a portable device that may be used to trigger displaying a page of document, according to certain embodiments of the invention. Patent FIGS. 3A and 3B are diagrams illustrating documents in an exemplary application that an accelerometer may be utilized.

Apple's patent FIGS. 9A, 9B, 10A and 10B are diagrams illustrating an exemplary gaming application based on an accelerometer. 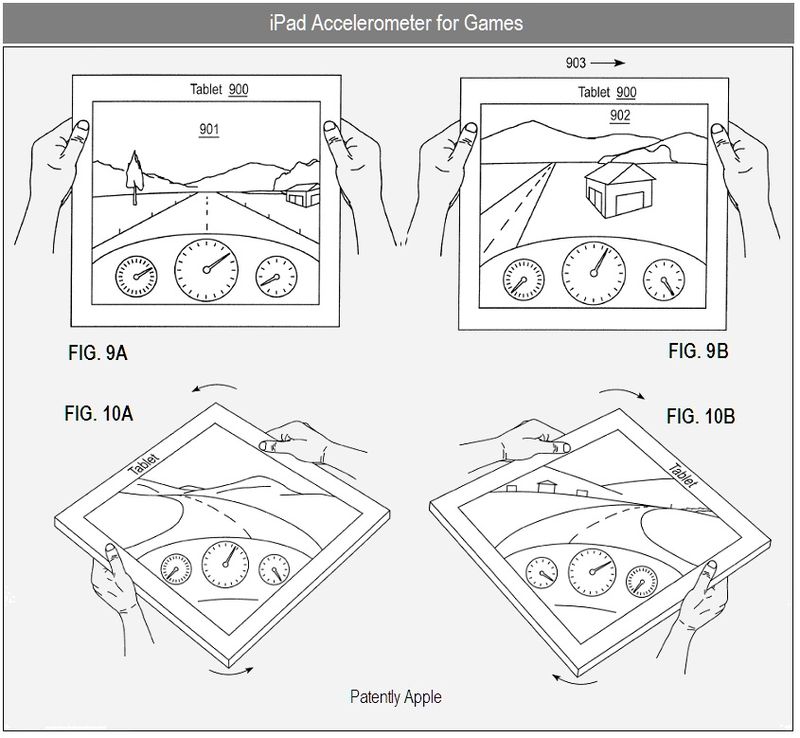 The iPad's Accelerometer for Maps and Wireless Antennas

Apple's patent FIGS. 12A and 12B are diagrams illustrating an exemplary mechanism for activating/deactivating interfaces of a portable device based on an accelerometer. Interfaces 1204 and 1207 are wireless interfaces, such as, for example, antennas or wireless transceivers. 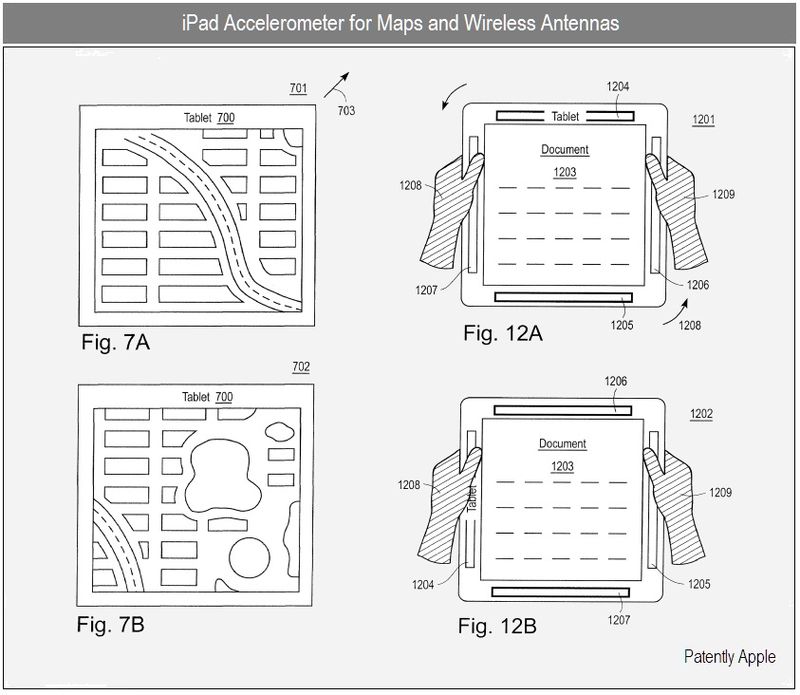 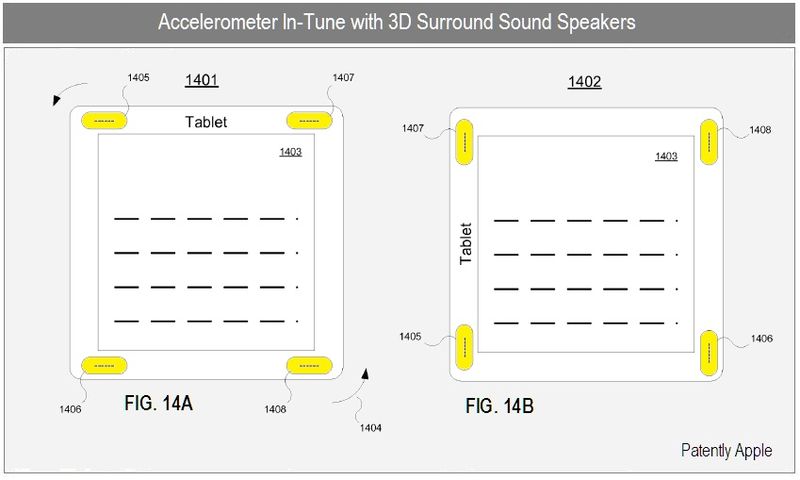 Referring to FIG. 14A, a tablet includes multiple speakers 1405-1408 disposed on different locations. In the orientation 1401 prior to a movement, an audio driver may be configured to generate proper 3D surround sound considering speakers 1405-1406 on the left and speakers 1407-1408 on the right. When the portable device is moved, for example, according to the moving direction 1404 for 90 degrees, a second orientation 1402 is detected and determined by an accelerometer and its associated controller and/or firmware as shown in FIG. 14B.

The desire to cover a wide range of radio frequencies presents challenges to antenna designers. It is typically difficult to design antennas that cover a wide range of communications bands while exhibiting superior radio-frequency performance. This is particularly true when designing antennas for handheld electronic devices where antenna size and shape can be particularly important.

As a result of these challenges, conventional handheld devices that need to cover a large number of communications bands tend to use multiple antennas, antennas that are undesirably large, antennas that have awkward shapes, or antennas that exhibit poor efficiency.

Apple's patent FIG. 26 is a cross-sectional side view of an illustrative handheld electronic device having an illustrative three-dimensional broadband antenna with a coupled feed in accordance with an embodiment of the present invention. To avoid radio-frequency interference, some or all of components may be surrounded with radio-frequency shielding.