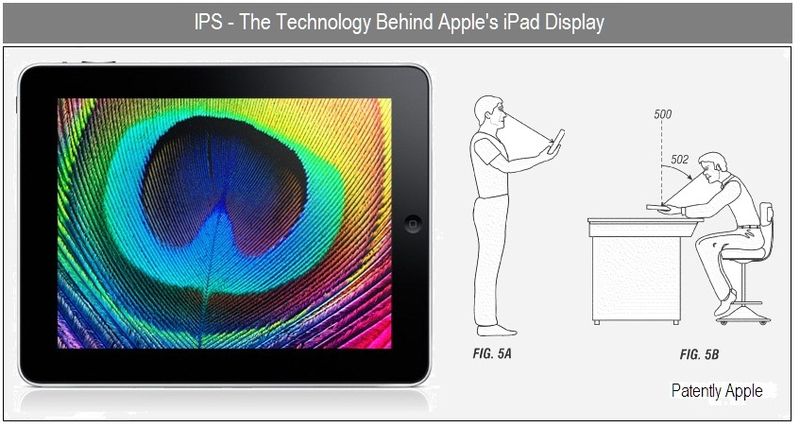 On March 11, 2010, the US Patent & Trademark Office published 28 patent applications from Apple and in this report we point to one of the patents behind Apple's iPad display technology, a new patent revealing a new audio plug for the iPhone and iPod touch that is positioned on the right side of the unit which may suggest that the audio had to be moved to make way for a new component such as a video calling camera perhaps? And lastly, Apple reveals their secret sauce behind the iPod Touch assembly – which I can't wait to try at home – ha!

Such limitations are not suitable for display devices, particularly handheld devices that are expected to tilt, shift, or otherwise change position many times in the course of a day. Moreover, since inclination sensing is expected to become a prevalent means of providing input to various software applications in the immediate future (for example, in gaming applications), it is unreasonable to continue requiring the user to assume the same vantage point every time the device is in use. 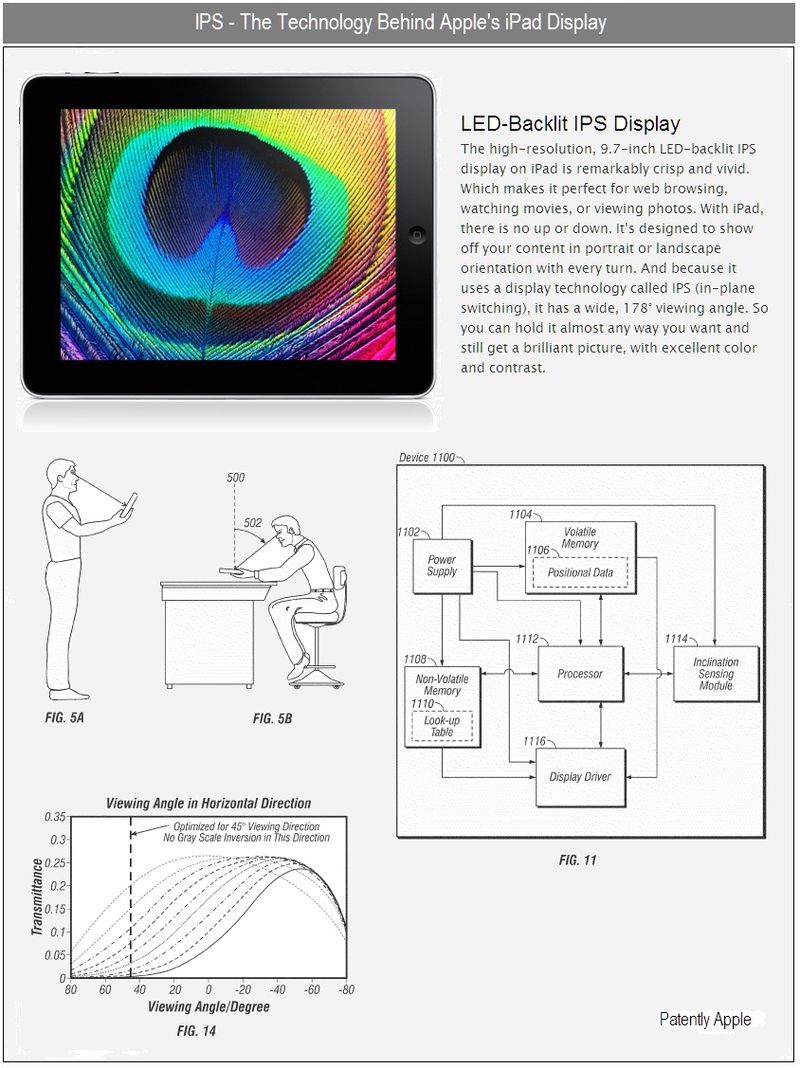 Apple's invention satisfies the foregoing needs by disclosing, inter alia (among other things), methods and apparatus adapted to present graphical data at acceptable luminance levels for each of a plurality of display vantage points. In some embodiments, the orientation is detected automatically, and display is adjusted in real time.

Apple's current patent is extremely detailed and geared for engineers in this specific field. For more information on this patent, view this temporary link.

Patently Apple's breaking news report about IPS prior to Apple's announcement of the iPad titled "Apple Reveals New Touch Screen Technology for iPhone & MacBook Tablet," could shed more light on this subject for most readers.

Standard audio connectors or plugs are available in three sizes according to the outside diameter of the plug: a 6.35 mm (1/4'') plug, a 3.5 mm (1/8'') miniature plug and a 2.5 mm (3/32'') subminiature plug. The plugs include multiple conductive regions in distinct portions of the plug such as the tip, sleeve and one or more middle portions between the tip and sleeve and are thus often referred to as TRS (tip, ring and sleeve) connectors.

A standard receptacle or "jack" used to connect an audio plug, such as plug 10 or 20, to an electronic device includes an opening through which the plug is inserted that has an interior diameter sized to receive the plug. Taking into account the thickness of the housing in which the opening is formed as well as an appropriate amount of clearance for the plug to slide into the receptacle, a standard receptacle for a 3.5 mm audio plug has a thickness that is greater than 3.5 mm. As electronic devices get thinner, the diameter of the audio plug and corresponding receptacle have been found to be limiting factors in reduction of device thickness. While it is possible to develop plugs that are thinner than either the 3.5 mm miniature or 2.5 mm subminiature audio plugs that could be used with a correspondingly thinner receptacle, smaller connectors are not backward compatible and need to use an adapter for larger jacks. 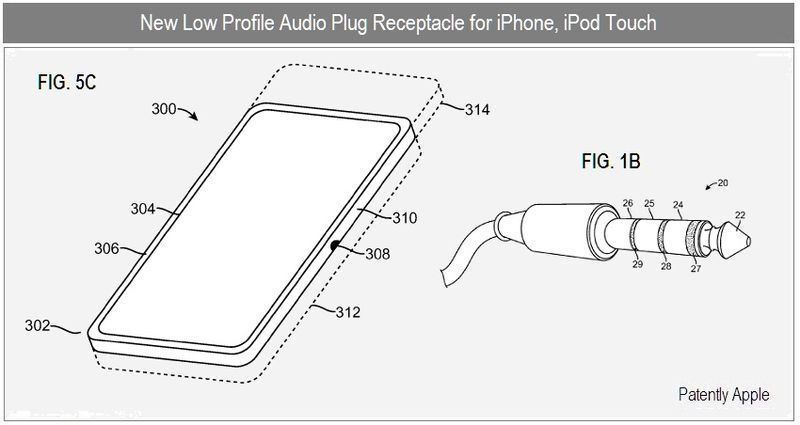 Apple's patent figure 5C, which isn't explained in the patent, clearly presents a new audio plug receptacle on the right side of an iPhone and/or iPod touch.

Apple credits Stephen Lynch and Anthony Montevirgen as the inventors of patent application 20100062656.

The Secret Sauce behind the Assembly of the iPod Touch – Patent

One design challenge associated with the portable electronic device is the design of the enclosures used to house the various internal components. This design challenge generally arises from a number conflicting design goals that includes the desirability of making the enclosure lighter and thinner, the desirability of making the enclosure stronger and making the enclosure more esthetically pleasing. The lighter enclosures, which typically use thinner plastic structures and fewer fasteners, tend to be more flexible and therefore they have a greater propensity to buckle and bow when used while the stronger and more rigid enclosures, which typically use thicker plastic structures and more fasteners, tend to be thicker and carry more weight. Unfortunately, increased weight may lead to user dissatisfaction, and bowing may damage the internal parts

Furthermore, in most portable electronic devices, the enclosures are mechanical assemblies having multiple parts that are screwed, bolted, riveted, or otherwise fastened together at discrete points. For example, the enclosures typically have included an upper casing and a lower casing that are placed on top of one another and fastened together using screws. These techniques typically complicate the housing design and create aesthetic difficulties because of undesirable cracks, seams, gaps or breaks at the mating surfaces and fasteners located along the surfaces of the housing. For example, a mating line surrounding the entire enclosure is produced when using an upper and lower casing. Not only that, but assembly is often a time consuming and cumbersome process. For example, the assembler has to spend a certain amount of time positioning the two parts and attaching each of the fasteners. Furthermore, assembly often requires the assembler to have special tools and some general technical skill.

Another challenge is in techniques for mounting structures within the portable computing devices. Conventionally, the structures have been laid over one of the casings (upper or lower) and attached to one of the casings with fasteners such as screws, bolts, rivets, etc. That is, the structures are positioned in a sandwich like manner in layers over the casing and thereafter fastened to the casing. This methodology suffers from the same drawbacks as mentioned above, i.e., assembly is a time consuming and cumbersome. 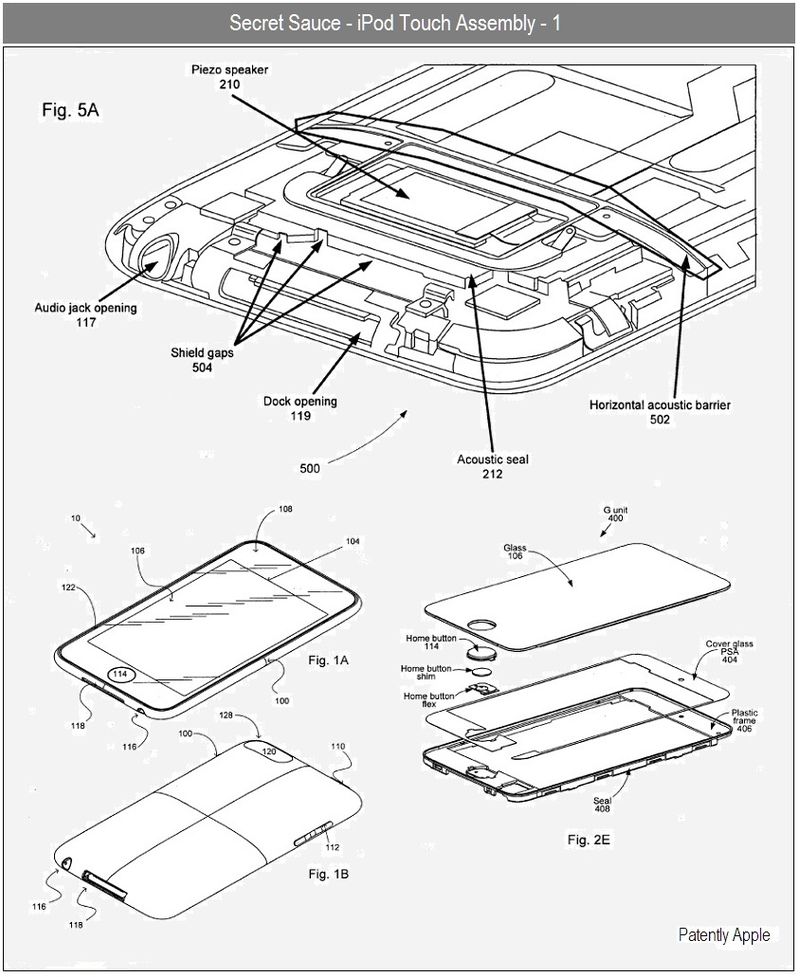 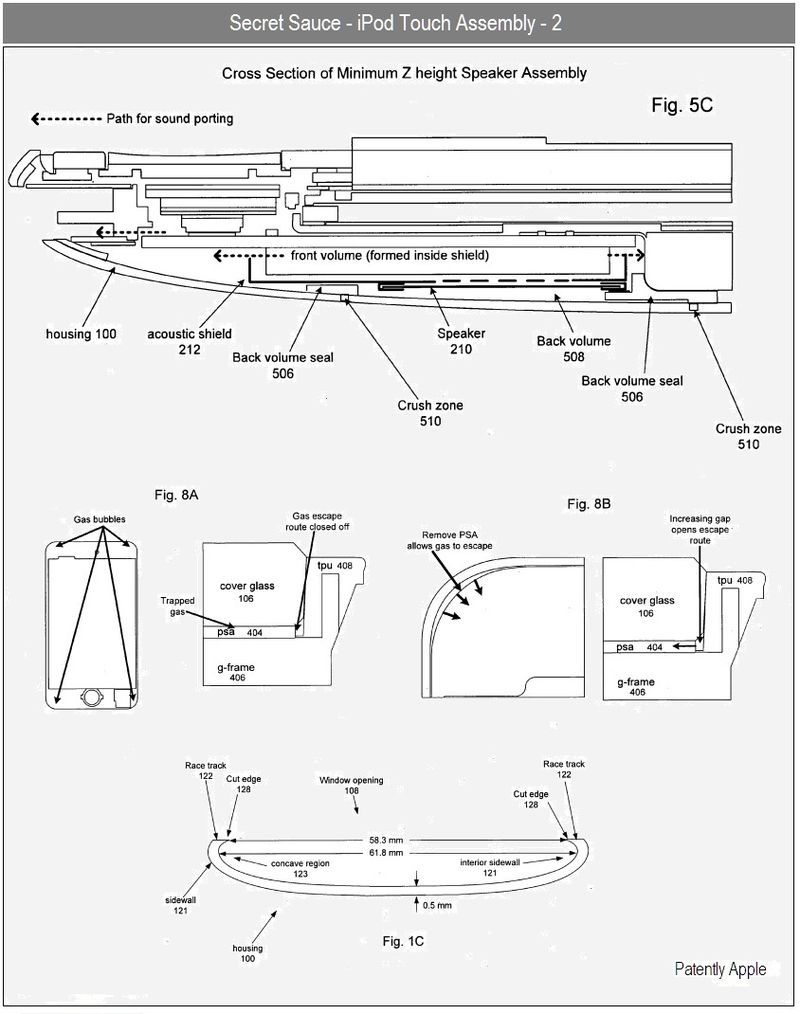 If you ever wanted to know the secret sauce behind the iPod Touch assembly, then read patent application 20100061055 or view this temporary link – 2. Warning: Don't try this at home.