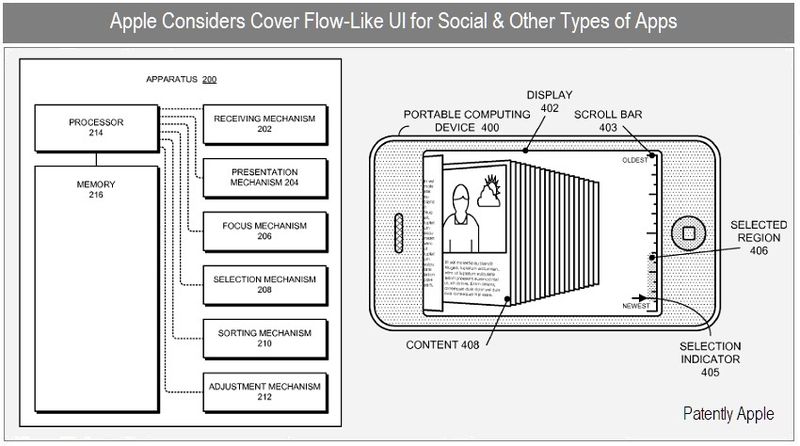 In the second half of 2007 Apple had successfully integrated Cover Flow into their iPhone and iPod touch handhelds. That provided users with the ability to view and flip through their collection of iTunes album covers in a quick and easy way using a very unique 3D-like user interface. Of course that was the original intent for the app that was originally developed by Steel Skies - prior to Apple's acquisition. With a year's worth of experience with Cover Flow on handhelds under their belt, it appears that Apple's R&D went right to work on expanding the utilization of such a feature into other types of applications. Apple's exemplary example displayed in today's patent once again points to a social networking application. However, it's currently unclear whether Apple is planning to add this methodology to their iGroups project or simply make this technology available to third party iPhone developers in general. Time will tell.

The embodiments presented in Apple's patent relate to a method and an apparatus for selecting an item of content on one of Apple's media players (mainly the iPhone, though it would be a cool application to have on a future iPad) by rotating the unit from portrait to landscape.

In contrast to the simple list method of navigating content, embodiments of the present invention provide an easier technique for browsing and selecting content. At any time, the user could rotate their Apple media player to view a detailed list view that displays the content of each item in a way that allows the user to quickly flip through the items to find the desired item. Once the focus is on the desired item, the user simply rotates the portable computing device to select the desired item.

In a traditional selection environment for a typical social-networking application, a user is presented with a simple list of entries for various users. An example of a simple list based UI could be seen on a networking app such as Foursquare or Apple's FIG. 4A – as shown below. 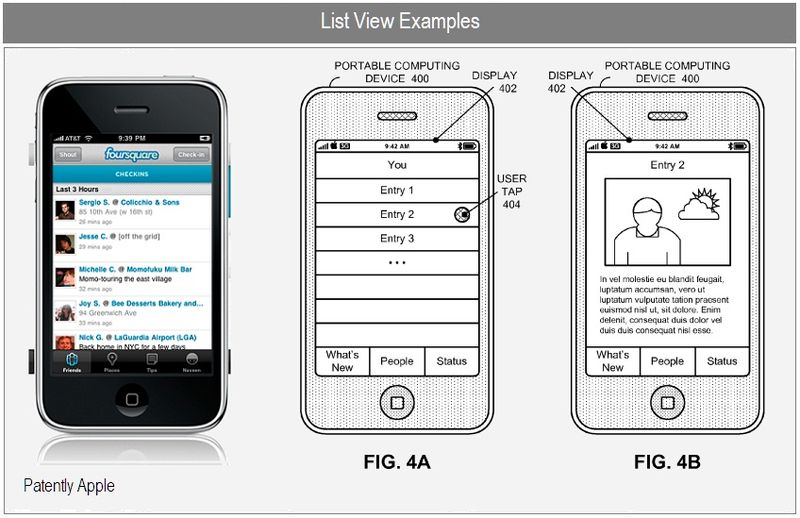 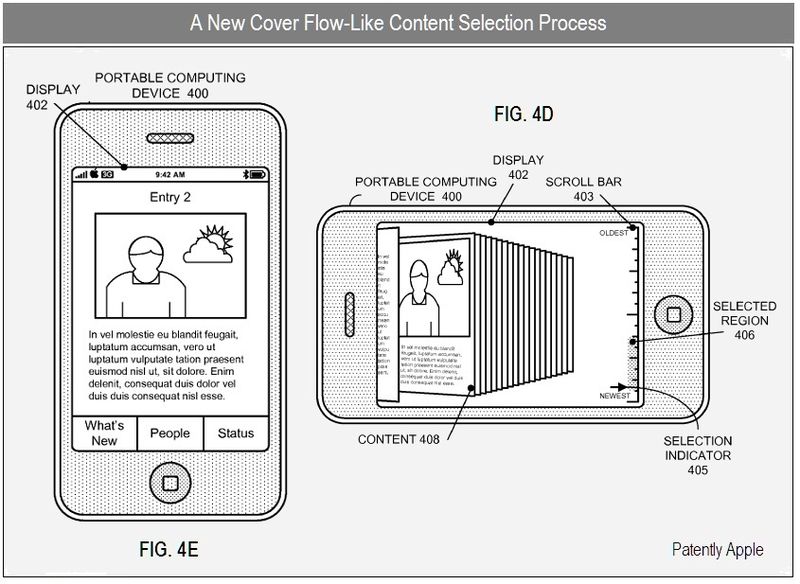 In some embodiments of the present invention, the content is stacked along a simulated Z-axis, which the user could navigate by moving his or her finger along a vector collinear to the simulated Z-axis.

In some embodiments of the present invention, the systems presentation mechanism displays scrollbar 403 beside the detailed list of items, as illustrated in FIG. 4D. The system also displays on the scrollbar a position of an item of content that has the focus, as is indicated by selection indicator 405.

Apple's patent states that "the system may indicate on the scrollbar a selected region 406, which indicates the range of all of the items visible on display 402 at the current time." That could allow a user to leap back and forth in precise increments such as 5 or 10 contacts at a time instead of just scrolling aimlessly - Though it's obviously the users choice as to which method is appropriate at any given time within a given search.

Using the Pinch Gesture to Reduce or Expand Your List Size

Although all of the patent embodiments disclosed in this patent were specifically related to a social-networking application for exemplary purposes – the patent indicates that the method could in fact apply to other future applications. Although the patent leaves this area wide open, it's safe to say that Apple and/or third party developers could create some simple iApp-type of applications with such a set of tools. Think of having a handy Periodic Table of Elements readily available to students to flip through or perhaps a handy recipe card system for Mom.  I could think of a few business apps as well that this feature could be used for, as could you I'm sure. In fact, if you could think  of a simple application that could use  this feature, then why not list it in the comments area below.

For now, however, it's still a patent on the drawing board.

Apple credits Martin Murrett, Christopher Rudolph, Richard Cave, Kevin Smyth and Glyn Raemon as the inventors of this March 18, 2010 patent application titled "Selecting an Item of Content in a GUI for a portable Device," originally filed in Q3 2008.

They're demoing on an iPhone,but that looks more suited for an iPad. A curious blend of stacked coverflow, meets Time Machine UI?