Why would Apple want to add liquid cooling to the iMac? That was the question on February 10 and it becomes the focus of several new Apple patent applications discovered today at the USPTO. The Mac community, for some reason, got hung up on Apple's old G5 Mac that was designed with large pipes etc, even though the patent clearly indicated it was about a mini-cooling system. To make this point crystal clear - you could download this four page PDF from Asetech that shows just how small cooling systems are getting. In today's patents, Apple mainly focuses on new thermoelectric cooling systems that could be built into a modified MacBook hinge system. Apple's patents attack the problem from different angles making it clear that Apple is searching and researching new ways to keep all of their future devices even cooler. Considering that Steve Jobs tried to change our perception of Apple in January by stating that they were the number one mobile device company in the world, it stands to reason why keeping mobile devices cool physically as well as esthetically is paramount.

As electronic components of various electronic devices (e.g., laptop computers) evolve into faster and more dynamic machines, their power requirements often consequently increase. With this increase in power consumption - an increase in power dissipation in the form of heat can result. For example, in a laptop computer, chipsets and microprocessors, such as central processing units ("CPUs") and graphics processing units ("GPUs"), are major sources of heat. Heat dissipation is an important consideration in the design of such electronic devices. If this heat is not adequately dissipated, the electronic components may fail and/or cause damage to the electronic device.

Accordingly, what is needed are methods and apparatus for cooling an electronic device.

In an alternative architecture, Apple illustrates that one of the next generation cooling systems that they're contemplating would be engineered right into the MacBook's hinge under the display. 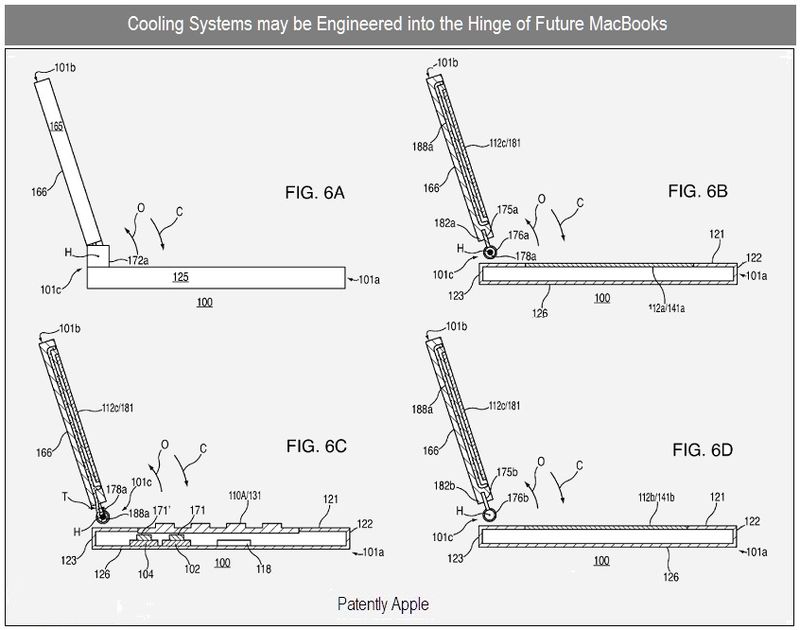 The patent, being non-committal until patent figures 6A to 6D, for example, makes it difficult to state that FIGS 2 and 3 below are in fact classic notebooks. It could simply be the engineer's patent template used to display a generic notebook or it could be indicating that there's a new device that fits into one of the device noted above, in the making. Only time will tell if Apple's FIG.2 is actually indicating a new device like a Mini-MacBook, something else different altogether or simply a generic notebook.