On February 25, 2010, the US Patent & Trademark Office published a patent application from Apple that reveals various concepts behind a newly advanced touch screen login system that uses a signet based concept that could take on many shapes – such as a specialized card or cool ring. In fact, it would act very much like a secret decoder ring was supposed to – though you won't find it in your cereal or Cracker Jack box – hopefully, that is. The signet based system could act as a form of security system and the actions could initiate when logging onto your home computer or a computer network so as to permit authorized individuals access to restricted areas of the computer or computer network, loading a user profile associated with a user's preferred arrangement of the computer desktop and so forth. The signet based system would or could apply to all present and future Apple touch screen based systems and the patent in fact makes it clear that that will include the iMac, MacBook, Mac Pro and also extend to public computer systems at schools, libraries, kiosks, gaming machines, restaurant reservation terminals and more. This could and should be a lot easier to use than keying in a sophisticated security password while making it incredibly more difficult for hackers to crack - being that the signet could include patterns and shapes unique to the individual user or institution.

Computer based systems utilizing touch screens have been used in many settings including retail, commercial, industrial, office, hospitality, education, and gaming environments, etc. By way of example, popular applications include information.

In environments utilizing POS machines, it is common practice to assign levels of authority to various individuals on the staff. For example, a sales clerk may be able to enter sales information but does not have the authority to make a refund. A supervisor is generally needed to execute a refund. The sales clerk and the supervisor may use the same POS terminal, but each of them will have a unique login code. Login codes are easily stolen or otherwise compromised. One well known solution to improve security is the use of physical keys. The owner of the physical key will know if it is stolen, whereas a stolen login code leaves no trace if stolen. Typically, physical keys are expensive and the terminals must be equipped with a locking mechanism that serves no function other than security.

Similar situations can be found in industrial settings where process conditions are tightly controlled. For example, an operator may be able to operate industrial machine but does not have authority to make changes to any of the process parameters associated with the industrial machine. In cases such as these, a supervisor is needed to make a change.

Thus, there is a need for improved techniques to implement different authorization levels or other tasks using touch screens. 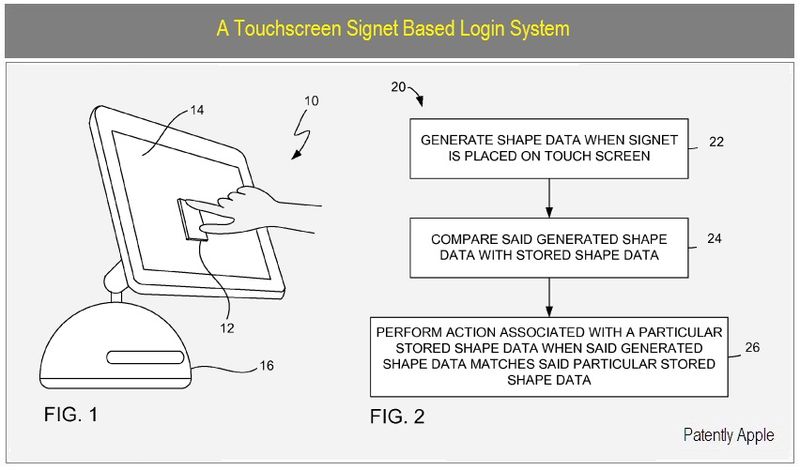 The actions, may for example, include logging onto a computer or a computer network, permitting authorized individuals access to restricted areas of the computer or computer network, loading a user profile associated with a user's preferred arrangement of the computer desktop, permitting access to web content, launching a particular program, opening a file or document, viewing a menu, making a selection, executing instructions, encrypting or decoding a message, operating an input/output device operatively connected to the computer and/or the like.

Apple's patent FIG. 2 is a shape recognition method, in accordance with one embodiment of the present invention.

Apple's patent FIG. 3 shown below presents us with a simplified diagram of a shape recognition system 30. Said system is configured to perform shape recognition, particularly to recognize the shape or signature of a signet. The system 30 includes a touch sensitive area 32 for receiving the signet. The system further includes a detection system 34 capable of detecting the shape or signature of the signet. The detection system may for example include a sensing device 36 configured to register touches positioned over the touch sensitive area, and control circuitry 38 that monitors the touch events and translates the touch events into other events in conjunction with its programming. 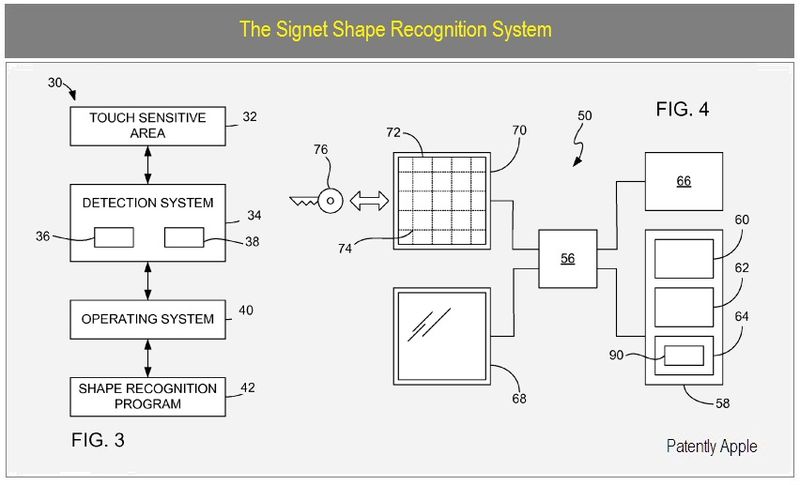 By way of example and referring to FIG. 5 below, each portion of a signet 76 in contact with a signet receiving area 78 of the touch screen produces a contact patch area 80. The contact patch area 80 covers several sensing points 74 thus generating several signals. The signals may be grouped together to form a signet signal 82 representative of the pattern of the signet 76. In essence, the signet signal represents a pixilated image of the signet in contact with the touch screen. 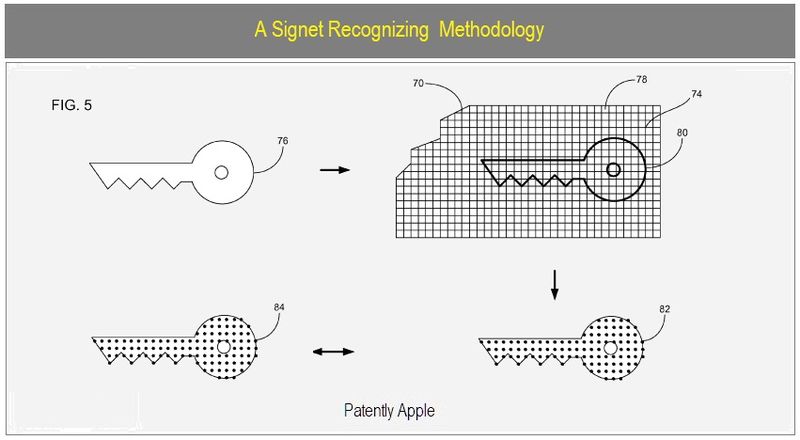 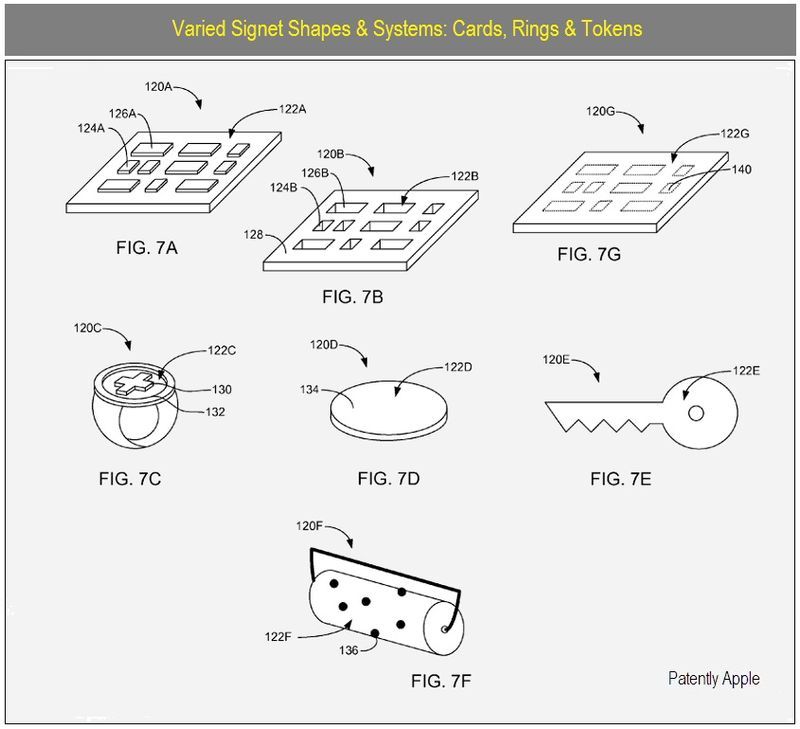 Apple's patent FIGS. 7A and 7B are diagrams of a signet card (or tag) 120A and 120B, respectively. The signet card 120A includes a raised pattern 122A of lines 124A and dots 126A. When pressed against a touch screen, the raised pattern 122A forms a contact patch area of lines and dots that is read by the touch screen. The signet card, on the other hand, includes a recessed pattern 122B in the form of lines 124B and dots 126B. When pressed against a touch screen, the surface 128 of the signet 120B other than the recessed portions 124B and 126B forms a contact patch area that is read by the touch screen (reverse pattern of FIG. 7A). Alternatively or additionally, the lines or dots may be replaced by text including letters and numbers. By way of example, the signet card may be a credit card or ATM card that already includes a series of raised numbers.

Patent FIG. 7C is a diagram of a signet ring 120C. Like the card, the ring 120C may include a raised or recessed pattern. In the illustrated embodiment, the ring includes a raised pattern 122C consisting of a letter 130 and a border 132. In particular, the letter "X" is surrounded by a circle "0". When pressed against a touch screen, the raised pattern 122C forms a contact patch area consisting of an "X" surrounded by a circle "0" that is read by the touch screen. 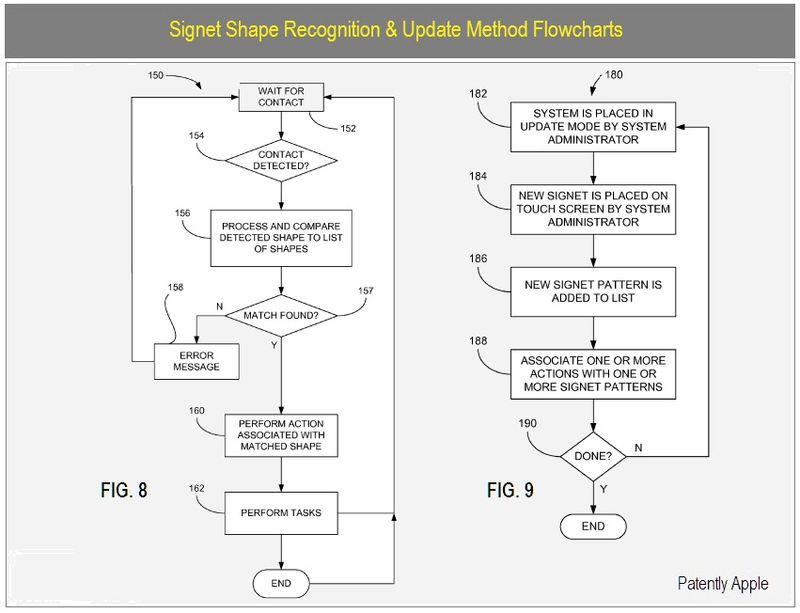 Apple credits Peter Kennedy as the sole inventor of patent application 20100045627, originally filed in Q4 2009 – though apparently the documents date back to 2004 – way before touch screens came to the iPhone. So this was an idea long in development at Apple.