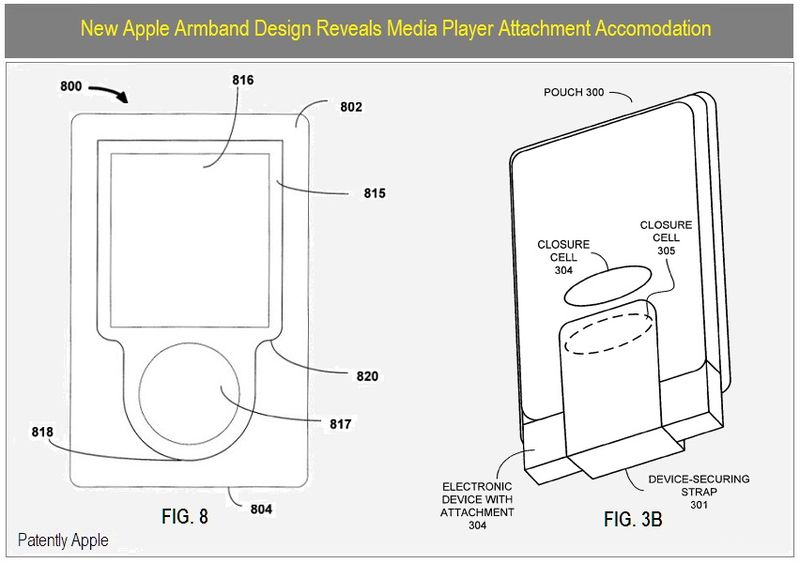 On February, 11, 2010, the US Patent & Trademark Office published several new patent applications from Apple covering such technologies as MagSafe, computer hibernation and an odd one that seems to be an old NeXT patent brought over to Apple listing Avie Tevanian. Yet there are two particular patents of interest today that oddly yet intricately relate to one another. One supports an attachment accessory and the other noted above, accommodates such an accessory. The patent credited to Apple engineers Gordon and Frazier Cameron relates to an all new media player armband. Apple's Patent FIG. 3B presents a back view of pouch 300 for the armband which is holding electronic device with attachment 304. One of the possible accessories we may see come to market is presented to you in this report while the other dates back to a July 2009 patent report covering an add-on accessory that would accommodate a SIM card, Flash drive and more.

This is Apple's second patent on this subject in recent months. Patently Apple's December 10, 2009 patent report covered the media player's full range of motions associated with today's patent regarding advanced navigation via motion sensors and accelerometer. The combined patents will provide you with a fuller picture and/or scope pertaining to this subject matter. 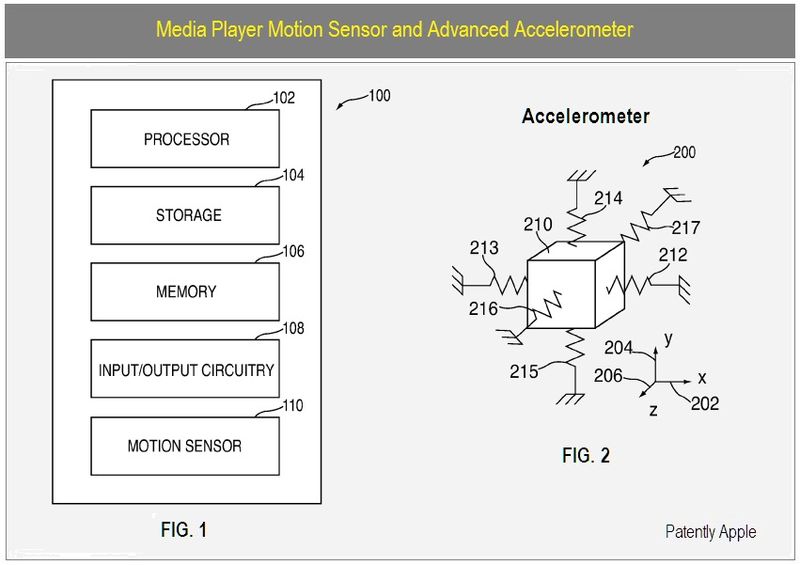 Apple's patent FIG. 1 noted above is a schematic view of an illustrative electronic device for detecting user inputs using a motion sensor; FIG. 2 is a schematic view of an illustrative accelerometer. Accelerometer 200 may include a micro electromechanical system (MEMS) having inertial mass 210, the deflections of which may be measured (e.g., using analog or digital circuitry). For example, mass 210 may be coupled to springs 212 and 213 along x-axis 202, springs 214 and 215 along y-axis 204, and springs 216 and 217 along z-axis 206. As mass 210 is displaced along any of axes 202, 204 and 206, the corresponding springs may deflect and provide signals associated with the deflection to the electronic device.

Apple's new armband clearly indicates that Apple is expecting to accommodate media player accessories like the ones presented to you in this report. To learn more about Apple's new armband, see patent 20100032462, originally filed in 2008.

Magnetic Connector for Electronic Device: Apple's patent relates to their Magsafe Power Adapter. For more information on patent 20100035441, view this temporary link. Apple was granted patent 7,641,477 on January 5 for MagSafe in additon to being granted a design patent on January 12, 2010.

Method and Apparatus for Binding User Interface Objects to Application Objects: Apple's Abstract: A graphical user interface (GUI) and accompanying functionality for binding Web page definitional elements to a back-end state (e.g., client- or server-side back-end state) and custom logic is provided. In one embodiment, a template containing definitional elements, custom logic, and bindings are generated that define all or a portion of a Web page based on input received and functionality provided by the invention.

This patent seems to be ancient if you go by the patent figures pointing to Netscape's CyberWind and listing former Senior Vice President of Software Engineering Avie Tevanian who left Apple in May 2006 as one of the inventors of patent 20100037154. Oddly, the patent is shown as being filed in Q3 2009. Obviously this was a NeXT based patent brought over to Apple. The question is, why only now? For more information, view this temporary link.

Tom, Apple has a patent covering a sophisticated Heart Rate Monitor (HRM) as shown below:

Anyone who loves running, jogging or even power walking would want this working with their Apple media players. This is definitely a patent we all hope comes to life sooner rather than later.

The optimist in me thinks that's a patent that hints at the possibilities for a Heart Rate monitor accessory that will wirelessly communicate with a HR monitor. There was a picture/fake picture of iTunes expanding what Nike+ did, and iTunes itself pushing more into the sports scene. Unfortunately it's just a patent for an armband at the moment. But with a dongle attachment, you'd want such an armband....

Some loyal Apple fans, who do running, jumping, climbing trees have been waiting for HRM for a long time - maybe we'll have to wait for iTunes X for this.