Apple: Plug a Digital Cam into Your iPod or iPhone 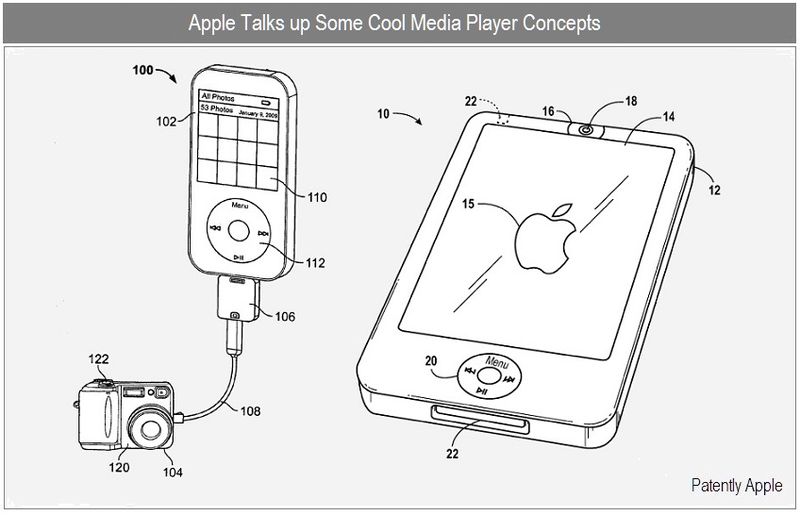 Yesterday a couple of oddball Apple Media Player patents came to light and yet each was important in its own right. One was so obvious, that I almost missed it. Being that this might be the year that I finally take the leap into digital photography, I saw Apple's patent present a digital camera, like an EOS Rebel from Canon, connected directly to an iPod. Surely this must be available now, no? NNNNN-No. I called my local Apple Store and explained what I was looking for, what was in yesterday's patent - and asked if they had it in stock. No, it doesn't exist, yet – was the reply. It may be coming to the iPad but no word yet for an iPod or iPhone, stated the Apple Rep. So unless my local Apple Store is full of idiots, Apple's patent has yet to come to life. The patent states that you'll be able to plug a still or video cam directly into your iPod or iPhone. Whether this is being reserved for Light Peak or USB 3.0 is unknown, but this is a very cool idea. The second patent discovered yesterday simply adds a little more proof that Apple is working on a rotatable video camera element that enables you to take regular videos of friends and events while being able to turn the camera lens inward so as to become a video cam for video calling. This is Apple's second patent this quarter discussing this feature. 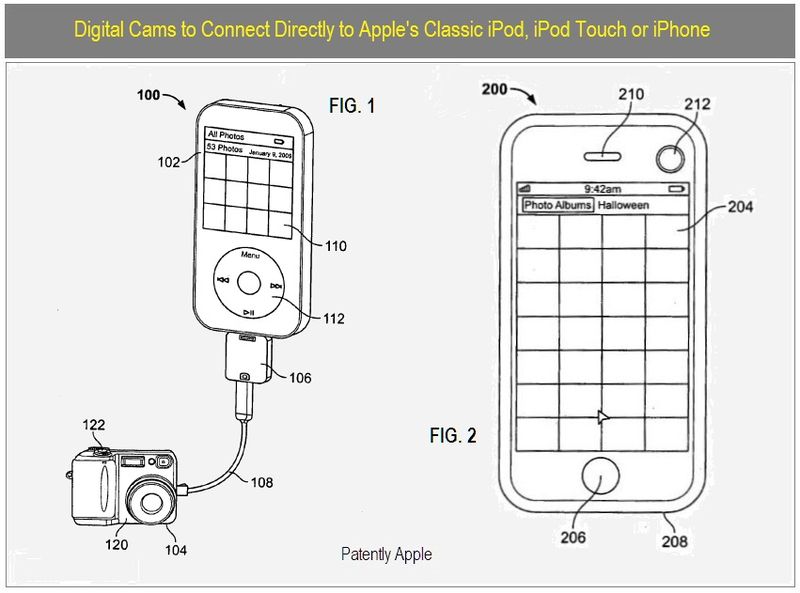 Update: Apparently Apple used to have an iPod Camera Connector. It no longer appears to be available. However, the new iPad Camera Connector, as presented by iLounge may be reconfigured for future iPods and iPhone, just like the Apple rep first stated in my introduction. Complaints about the first generation model revolved around sluggish performance. That's why I stated that USB 3.0 or Light Peak may be the hold back. Apple's patent clearly positions the come-back for the iPod Camera Connector in the future. 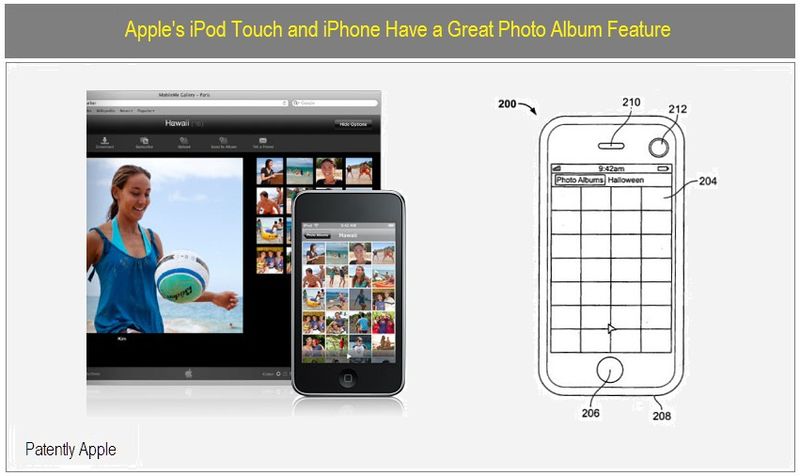 For more about Apple's great slideshows and more, see iPhoto and video editing on the iPhone 3G.

While we're still in the dark as to what Apple will officially dub their iPhone video calling feature (iChat to Go, Portable iChat, or simply iChat, period), Apple has sure been talking it up lately in a series of patents. In this latest patent, Apple describes a concept video calling capable camera. In the presently illustrated embodiment, the exemplary device 10 includes an enclosure or housing 12, a display 14 and a camera 16 having a lens 18.

A camera on a "moveable or rotatable element" was first revealed by Apple and presented in Patently Apple's January report titled "Working on iChat & 3D UI for Portables." Such a camera concept would be required for taking both videos of events occurring behind the media player and video conferencing on the face of the device – which was covered in our February report titled "Location Based Social Networking & Video Calling Coming to iPhone." 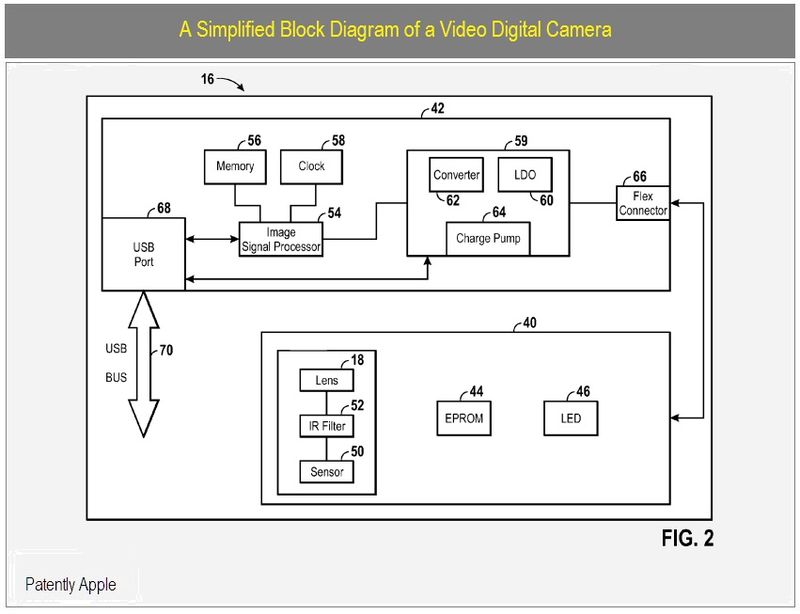 Apple's patent FIG. 2 is a simplified block diagram of a video digital camera in accordance with one embodiment of the present invention. Beyond this point, the patent goes down a technical rabbit hole and only those involved in the camera industry could appreciate the technical nuances that are being described in this patent.

Despite the fact that the U.S. International Trade Commission will investigate Eastman Kodak Co.'s patent-infringement complaint over digital-camera technology used in iPhones, Apple keeps advancing their own camera technologies. Kodak also has filed separate lawsuits against Apple in U.S. District Court in Rochester, claiming an infringement of patents related to digital cameras and certain computer processes. Patently Apple has discovered that the 1993/1994/1995 granted patents in dispute are 5,226,161, 5,303,379 and 5,421,012. All of which are Wang Laboratories Inc, patents that must have been acquired by Kodak in 1997. For more information on this law suit, see our special report titled "Scales of Justice: Eastman Kodak Company vs. Apple Inc."

Whilst holding back to see if Apple can extend this into the wired/wireless videorecorder/webcam realm - it's interesting to see where they could take it with cameras - the recent camera industry event has shown a few examples of accessories to cameras that plausibly an iPhone could take over.

My thanks to a Macite called "Bill" for emailing about his older iPod camera connector this morning. When it comes back out I'll be getting one for sure. Let's hope that Apple's next refresh of the iMac and MacBook comes with at least USB 3.0!

Would it be possible to plug my FireWire iSight camera into my iPod touch? The poor thing sits in a box with nothing to do!

All started because the DSLR always had such a horrible interface.

Apple, are you paying attention to Alex's idea? You should. Ha!

i did this mockup some weeks ago:
http://conferenza-info.com/2009/10/29/talkyoo-mockup-iphone-reflex/
do you like it?