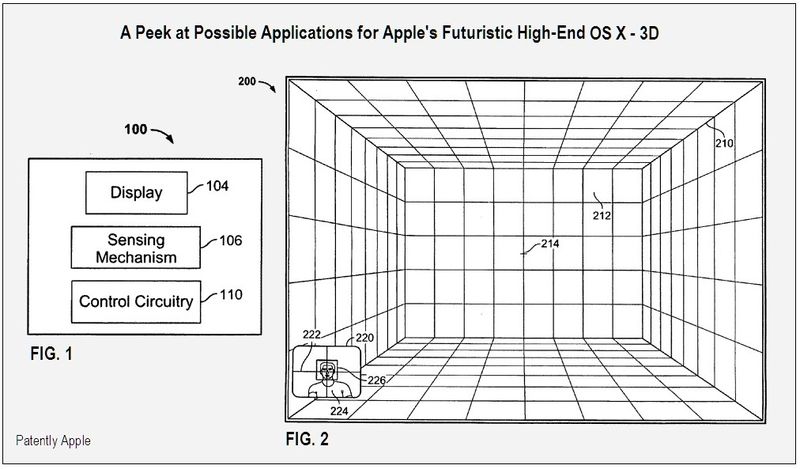 In December 2009, Patently Apple presented one of Apple's most exciting patents of the year which took us into the futuristic world OS X-3D. The patent presented us with a view of a sophisticated head tracking system that would allow the user to view different angles of a graphic, simulation model or even a chart using Apple's iWork based 'Numbers' application. Then last week in a posted report covering Intel's CES Keynote 2010, I presented the possibility that Apple would likely update their iLife Application suite applications iPhoto and iMovie in concert with the release of Apple's futuristic OS. The work at Intel's labs definitely sparked that idea, specifically in creating Avatars using iMovie. Today, I was presented with two simulations of what Apple's futuristic OS could look like working with medical and engineering applications. The simulations were done on an iMac and I think that you'll find them to be absolutely fascinating. As long as you know that they're simulations and not secret tests that I've discovered, we're okay with a little fun on a Friday: Check it out!

The following video demos are 3D simulations of how Apple's high-end 3D software could be used in the medical and engineering fields in the future.

"In an industry that relies heavily on charts and graphical information, we think Apple's head-tracking technology would be welcomed by physicians. It could be used to view X-rays, CAT scans, MRI scans, anatomical diagrams and more," stated Software Advice's Houston Neal.

You have to admit, the 3D wizardry could fool anyone – but the visuals of how it could work and look like in the future was worth bringing to your attention. The introduction of Apple's next generation 3D operating system, whenever it arrives - is bound to ignite another software revolution.

Patently Apple would like to send out a hearty thanks to Houston Neal and Jordan Kreft of Software Advice for creating these unique simulations and bringing them to Patently Apple's attention this morning.

That's both funny and true, Dave.

Apple's patent is really about depth perception as is noted in the original report. You'll find a link to that report in the first paragraph. In that report there's a 3D app video shown to run on an iPod touch that provides an excellent example of depth on a display that isn't 3D trickery.

On a tablet however, shifting or tilting the tablet in various positions to get a better view of something would be much faster tnan a mouse could be. So there's an application for the types of apps shown above. Yet perhaps the iMac isn't the best example for those types of apps.

God, that looks like a terrible idea. Who really wants to move their whole torso like to view anything?
A hand gesture system on the magic mouse or a touch screen could exactly what this demo protrayed, faster and easier, without the neck strain.

One word, "Wow!" I left the Palm fold and joined the Apple fold last year and I am not looking back. What a company! They really are true leaders at innovation. Thank You for the article.