Apple's Media Players will One Day be Both Portable TV & DVR 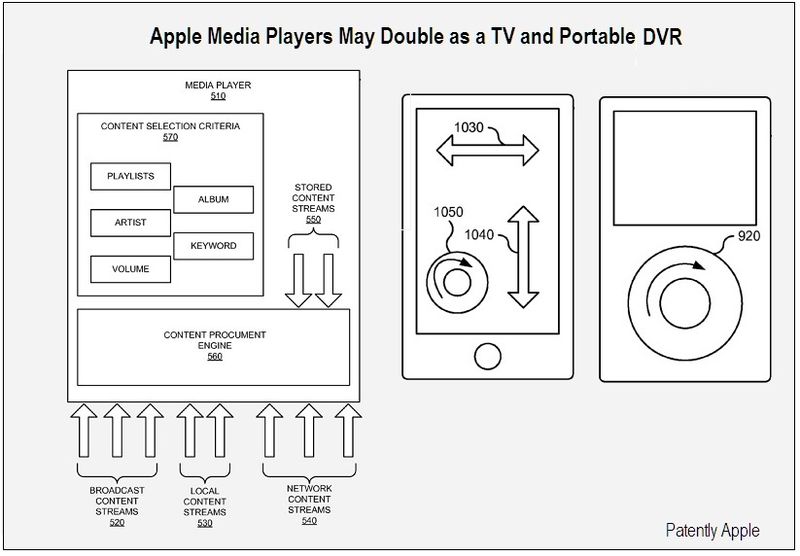 In some embodiments, the media player will be able to receive content or other media assets from a variety of sources, such as over the air radio or television (TV), satellite radio or TV, cable TV or music services, Internet streaming broadcasts, podcasts, satellite broadcasts, fiber optic distribution, or the like.

The Definition of Broadcast in this Patent:  As used herein, a "broadcast" can refer generally to real time distribution of content (e.g., audio and/or visual data, etc.) or other media assets via a wired or wireless medium to an arbitrary number of receivers that may be tuned in to receive it. In general, a receiver does not control when a broadcast begins or ends, although some receivers (e.g., audio or video recorders) may be able to store content streams for later presentation to a user. 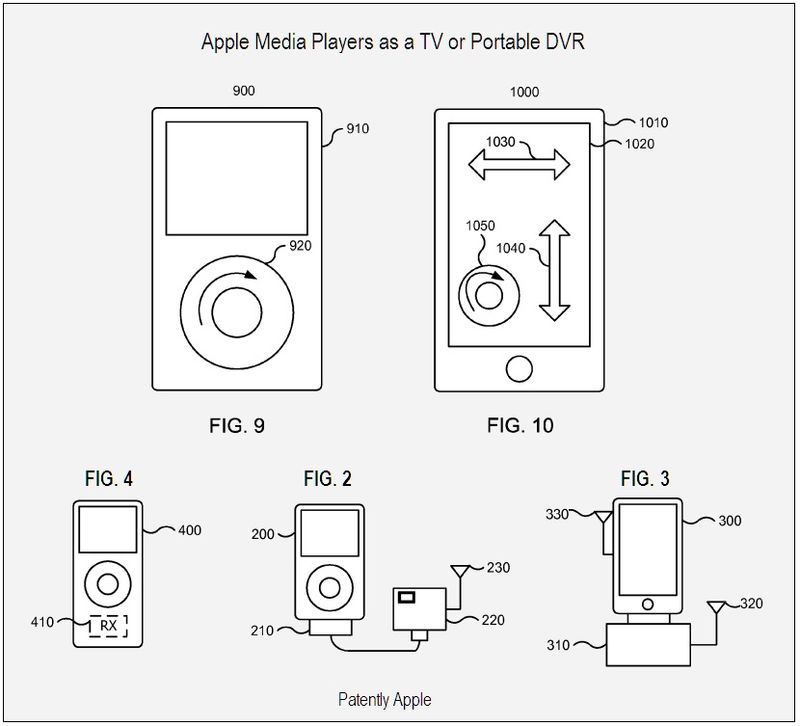 Although next generation iPods and iPhones will likely have this integrated accordingly, Apple appears to be at least thinking about adding an accessory to accommodate older media players in the market today.

In this example, receiver unit 220 can connect to antenna 230, which can be capable of detecting broadcasts of content from the one or more sources via a wireless medium (e.g., FM or AM radio in standard and/or HD formats, over the air TV, satellite TV or radio, WiFi, cellular communication network, etc.).

Watching TV on Your iPod While you Work at Home

I don't have cable TV hooked up in my office, but there are times that I wish I did just to stay on top of current events on CNN or CNBC. Maybe you'd like to keep one eye on a favorite show while you toil over a project or paper late at night. Well, it looks like that's coming to future iterations of Apple's media players – or as an added service to a next gen dock.

According to the patent, the receiver unit 220 may also connect to a cable (not shown) and thus be capable of receiving broadcasts of content from the one or more sources via a wired medium (e.g., cable TV service, wired Internet connection, or the like). Receiver unit 220 may include any hardware and/or software elements usable to extract content and/or metadata from wired and/or wireless media as desired.

Apple's patent FIG. 3 is a block diagram of media player 300 configured to receive content streams in one embodiment according to the present invention. Media player 300 can be linked to dock 310. Media player 300 may be coupled via wires or wireless using one or more connectors or ports (not shown) to interface with dock 310. Antenna 320 may be integrated into the housing of dock 310 or may protrude therefrom. Antenna 330 may be integrated into the housing of media player 300 or may protrude therefrom. Figure 3 is also noted as an iPhone being that it is noted as having the capability of making and receiving telephone calls, Yada-Yada-Yada.

Hmm, you have to wonder if that will be included in Apple's revolutionary next gen dock as was revealed in early December.

Apple's patent states that "in various embodiments, a media player or portable media device can analyze information associated with multiple content streams to determine currently playing and/or forthcoming content. The media player may selectively switch between sources of the multiple content streams based on what is currently playing or in response to the occurrence of an event.

Accordingly, the media player may automatically identify on which source and automatically tune to the source of music, television programs, and other content or media assets in which a user may be implicitly or expressly interested.

The user may define preferences or other criteria that instruct the media player to create an on-the-fly playlist of content in which the user is interested that comes from the multiple content streams." In terms of television, think of this feature as nothing short of being a portable DVR. 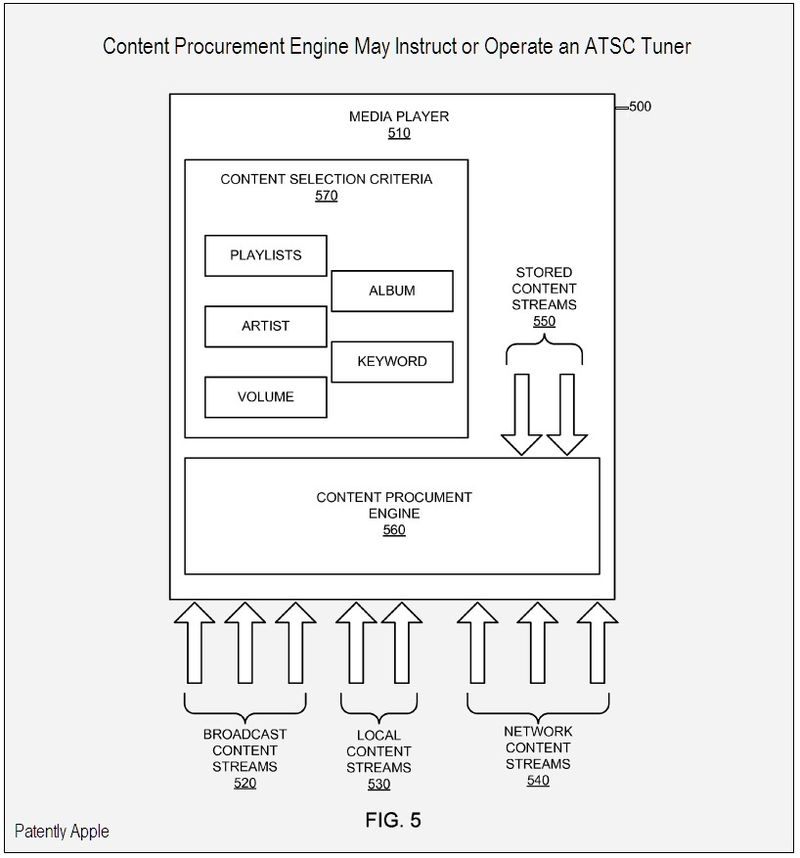 The patent goes on to state that the "media player may automatically switch between the sources of the multiple content streams to output the content according to the playlist."

In Apple's patent FIG. 5 noted above, we see a block diagram of media player 500 for selectively switching between sources of various content streams.

Media player 500 may receive broadcast content streams 520 from various sources (such as AM, FM, TV, HD, or satellite sources), including any of the sources and/or formats mentioned above.

In various embodiments, a user can interact with a media player or portable media device to browse or otherwise initiate playback of content or other media assets as if the user were "tuning" a radio or television dial.

Apple's patent FIG. 10 illustrates other mechanisms for navigating stations within navigation streams using media player 1000 in one embodiment according to the present invention. In this example, media player 1000 may include a housing 1010 with a touch screen 1020. Touch screen 1020 can provide a user with a display combined with a user interface for interacting by touch with the display. In one example, in response to scrolling or linear motions along a first line (as indicated by horizontal arrow 1030) and/or a second line (as indicated by vertical arrow 1040), media player 1000 may determine to switch between stations associated with one or more content streams.

Apple credits William Bull and Ben Rottler as the inventors of patent application 20100010648, originally filed for in Q3 2008.