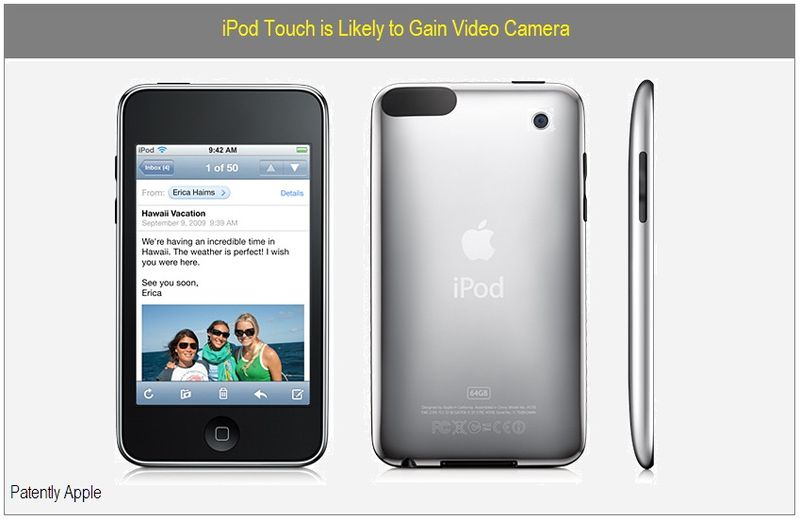 On January 28, 2010, the US Patent & Trademark Office published a patent application from Apple that reveals one of the next chapters for Apple's iPod Touch. The patent covers both the iPod touch and iPhone gaining a video camera. Being that the iPhone 3G-S now has that built-in, it's obvious that Apple's iPod touch is next in line.  A secondary patent of interest relates to the iPod touch gaining an LED backlight display sometime in the future.

Several methods for operating a built-in digital camera of a portable, handheld electronic device are described. In one embodiment, the device receives a user selection (e.g., tap, tap and hold, gesture) of a region displayed on the display screen (e.g., touch sensitive display screen). A touch to focus mode may then be initiated and an exposure metering area can then automatically be determined based on the user selection and displayed on the screen. Then a focus area can be automatically determined based on the user selection and an automatic focus scan initiated for the focus area. Apple's patent FIG. 1 shows a camera built into an iPhone and/or iPod touch. The media player must have a touch display. The built-in digital camera includes a lens 103 located in this example on the back face of the media player, like an iPhone has today. The lens may be a fixed optical lens system or it may have focus and optical zoom capability. Although not depicted in FIG. 1, there's an electronic image sensor inside and associated hardware circuitry running software that could capture digital images or video of a scene 102 that is before the lens 103.

The digital camera functionality of the media player includes an electronic or digital viewfinder. The viewfinder displays live, captured video (e.g., series of images) or still images of the scene 102 that is before the camera, on a portion of the touch sensitive screen 104 as shown. In this case, the digital camera also includes a soft or virtual shutter button whose icon 105 is displayed by the screen 104, directly below the viewfinder image area. As an alternative or in addition, a physical shutter button may be implemented in the media player.

Apple's patent FIG. 6 shows a portable device (iPod touch) undergoing a multi-finger gesture during an image capture process, in accordance with an embodiment. In particular, a pinch gesture corresponds to an object in the scene (or portion of the scene) to which priority should be given when the digital camera adjusts the image capture parameters in preparation for taking a picture of the scene. In this example, the user has selected the location where a person appears between a mountainside in the background and a tree in the foreground.

The portable device (iPod Touch) has the needed hardware and software to distinguish between a pinching movement and a spreading movement, and appropriately contracts or expands the size of the metering area. Gesture movements may include single or multi-point gestures (e.g., circle, diagonal line, rectangle, reverse pinch, polygon).

Apple credits Jeremy Jones, Nikhil Bhogal and Ralph Brunner as the inventors of patent application 20100020222, originally filed for in Q2 2009. 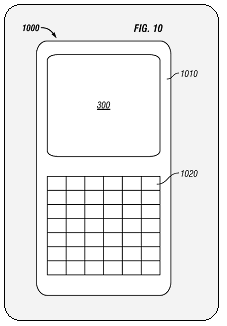 LED Backlight Driver Synchronization and Power Reduction:  Apple's patent application 20100020004 generally relates to systems and methods for backlighting a liquid crystal display - and more particularly to systems and methods for driving light emitting diode backlights for liquid crystal display screens. The patent's FIG. 10 illustrates that one or more iPod's are going to adopt LED backlighting. Yesterday, Apple revealed LED backlighting is the standard for their coming iPad. Yet it's not standard on all iPods. This patent proposes that this is being considered by Apple. For more information, view this temporary link.

Light Sensitive Display with Switchable Detection Modes: A display device including a surface for viewing an image comprising a stack of layers configured to display the image. A processor is configured to include switchable detection modes. Each mode is preconfigured to detect an object on or near the surface based on a given sensitivity to light, and has a different sensitivity than other of the modes. Today's patent application 20100020044 is directly related to Apple patents 20100013793, 20100013794 and 320100013796 – which were covered in a report posted on January 22, 2010 in respect to "light pens" and "laser pointers."

Hold Switch: If you want to understand the iPod Nano's hold switch reviewed in patent application 20100018844 - then view this temporary link.