The US Patent and Trademark Office officially published a series of 16 newly granted patents for Apple Inc. today. The notables within this group include one relating to the Nike + iPod device and monitoring system, another for an iPod workout armband, two very detailed multi-touch related patents covering noise detection in Multi-Touch sensors, another covering Apple's iPhoto calendar interface and finally we see that Apple has won their third patent related to the MagSafe magnetic connector.

Apple has been granted a patent for their Nike + iPod System. The patent covers improved techniques and systems for utilizing a portable electronic device to monitor, process, present and manage data captured by a remote sensor. Apple's media players offer a convenient and varied user interface, depending on which iPod or iPhone used, that can be visual and/or audio based customized to a particular application, user-friendly and/or dynamic.

The Nike+iPod Sports Kit is a device which measures and records the distance and pace of a walk or run. The Nike+iPod consists of a small accelerometer attached to or embedded in a shoe, which communicates with either the Nike+ Sportband, a receiver plugged into an iPod Nano, or directly with an iPod Touch 2nd Generation or iPhone 3GS. If using the iPod or the iPhone 3GS, iTunes software can be used to view the walk or run history. Wikipedia has more on this. 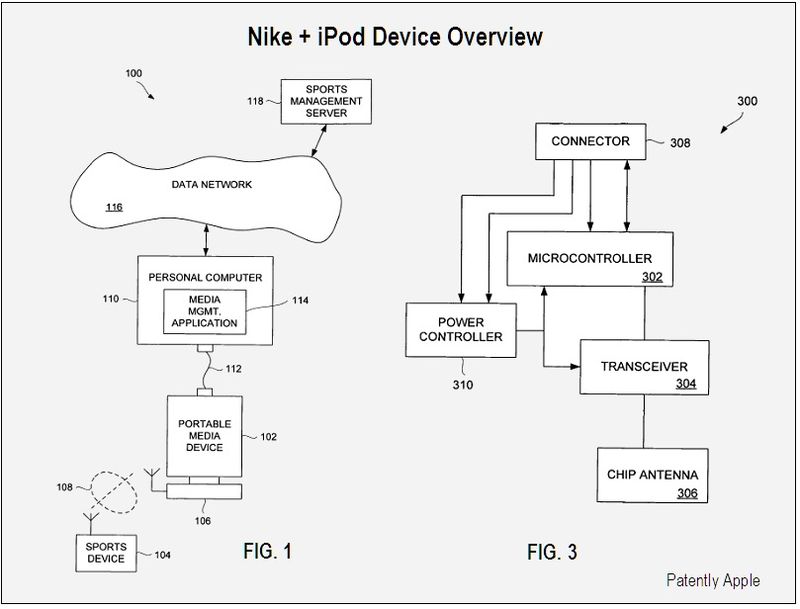 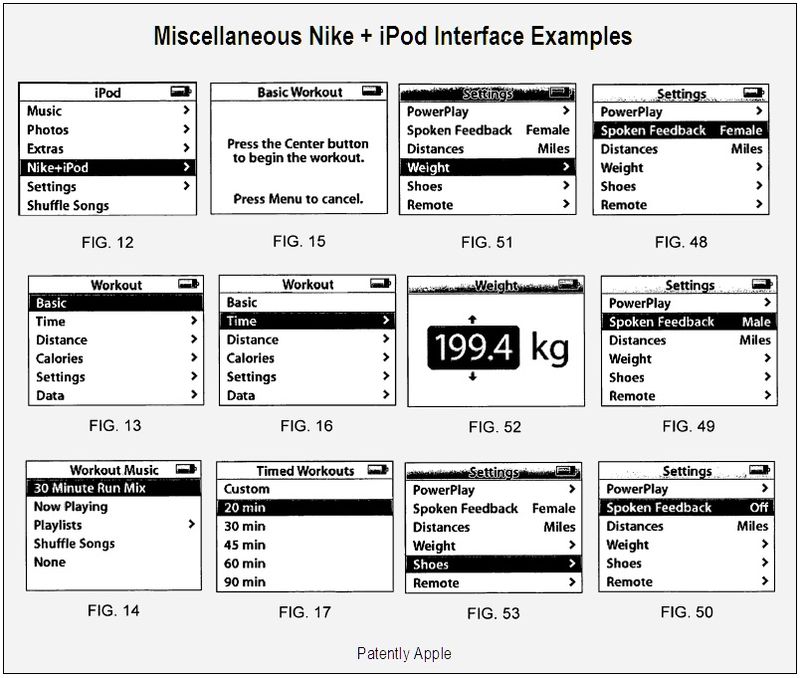 A Diagram of a Template Control System 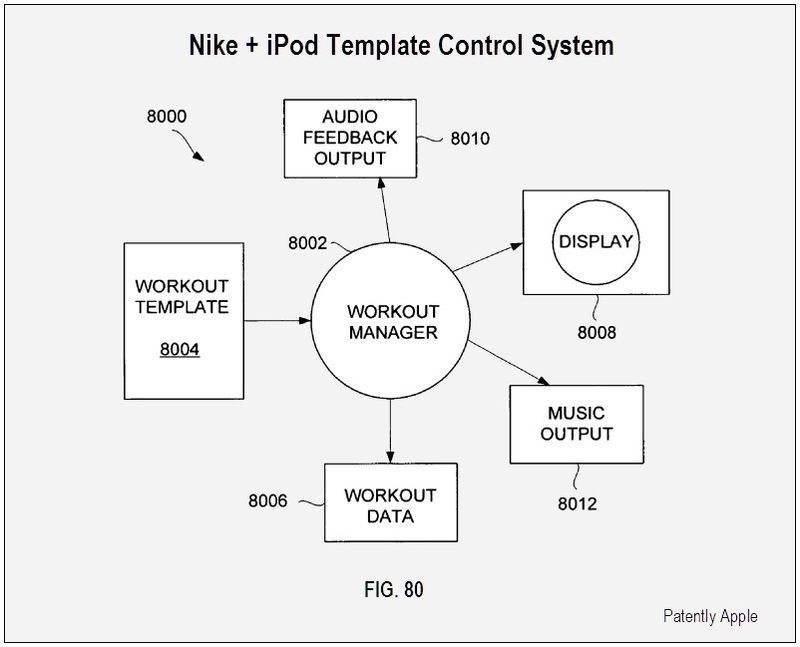 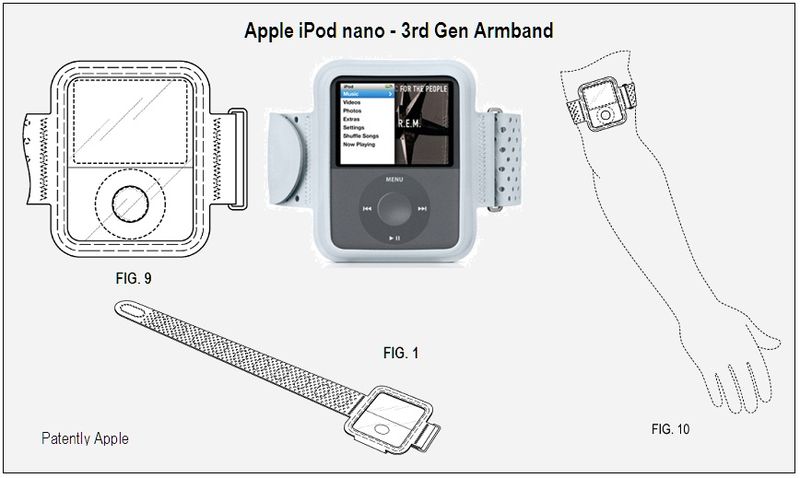 Apple's patent describes Multi-touch touch-sensing devices and methods. In particular, the touch sensing devices could include multiple sense points, each of which can be stimulated with a plurality of periodic waveforms having different frequencies to measure a touch value at the sense point. Noise at one or more of the frequencies can interfere with this measurement. Therefore, various noise detection (and rejection) techniques are described. 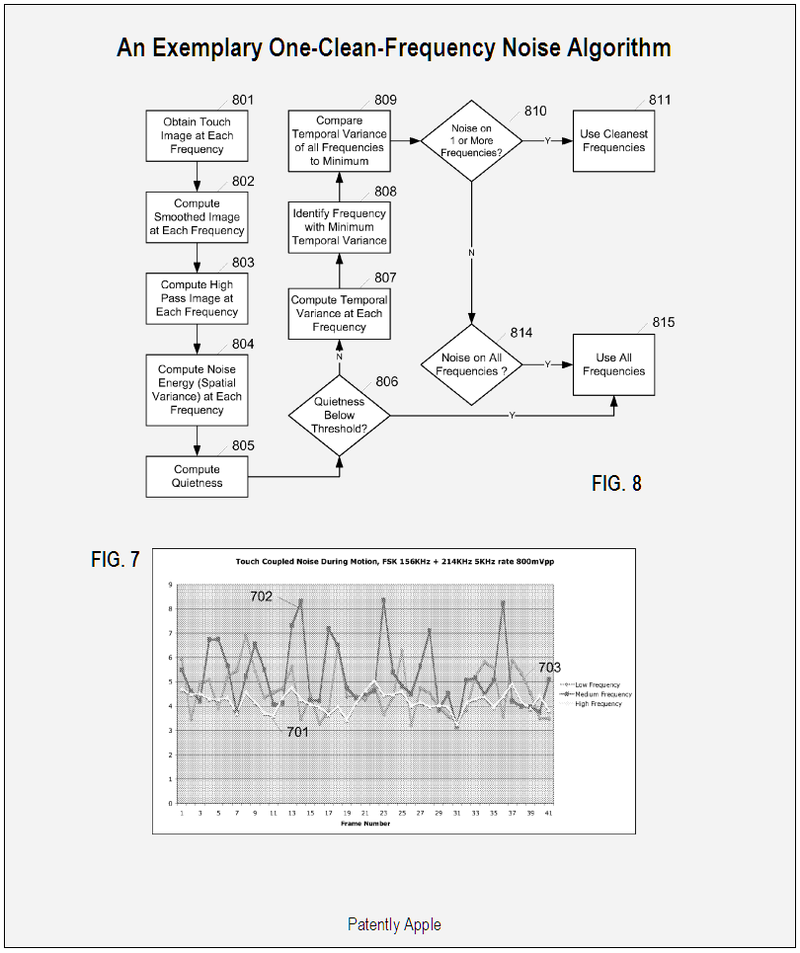 Apple's patent FIG. 7 illustrates a plot of spatial variance of sample values over time. An exemplary one-clean-frequency noise algorithm is illustrated in FIG. 8. As an initial step 801, a touch image can be obtained at each of the drive frequencies. The one-clean-frequency noise algorithm can analyze both spatial and temporal statistics of the sample values. Therefore, subtracting the effects of varying touch (e.g., fingers or other hand parts touching or hovering over the touch sensor) can be part of a one-clean-frequency noise algorithm, which can avoid confusing the touch signal with the noise signal. This can be accomplished by computing a smoothed touch image for each frequency (block 802) and subtracting each smoothed image from a corresponding touch image (block 803). The smoothed touch image may be computed, for example, by performing an iterated unsharp mask filter on each image frame.

Apple credits Sean Erik O'Connor and Wayne Westerman as the inventors of granted patent 7,643,011 originally filed in Q1 2007. Another multi-touch granted patent was published today under number 7,643,010 which credits Wayne Westerman and Steve Hotelling as the inventors. For information, see the temporary link to Peripheral Pixel Noise Reduction. 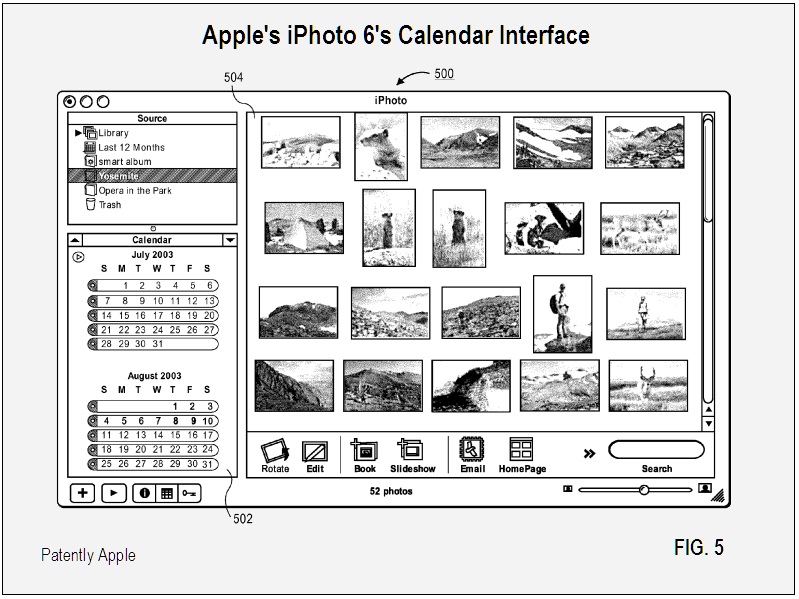 Apple was also granted a patent for MagSafe under the patent titled Electromagnetic Connector for Electronic Device. 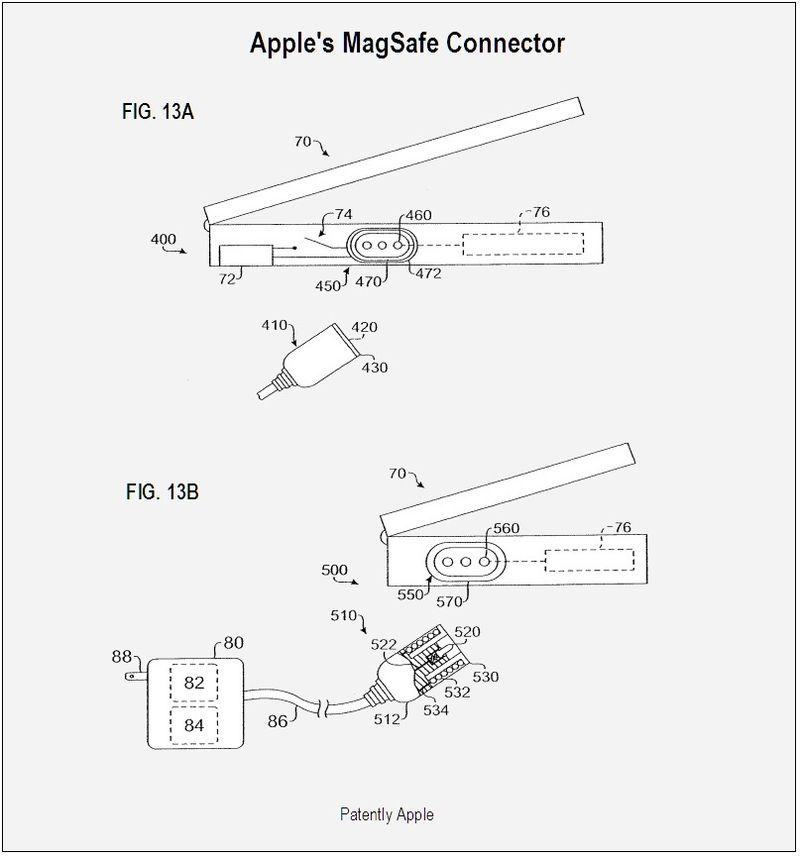 Apple credits John DiFonzo, Bartley Andre, Kayne Lim, Matthew Dean Rohrbach, Mark Doutt and Jean-Marc Gery as the inventors of granted patent 7,641,477 originally filed in Q1 2008. Wikipedia states that MagSafe is similar to the magnetic power connectors that many deep fryers and Japanese countertop cooking appliances have in order to avoid spilling their dangerously hot contents. While we're on the topic of hot, Apple was sued over MagSafe adapter safety issues in 2009. This is the third granted patent for Magsafe. Two others were issued in April 2009.