Apple Wins iChat and Major Tablet Patent Prior to Launch 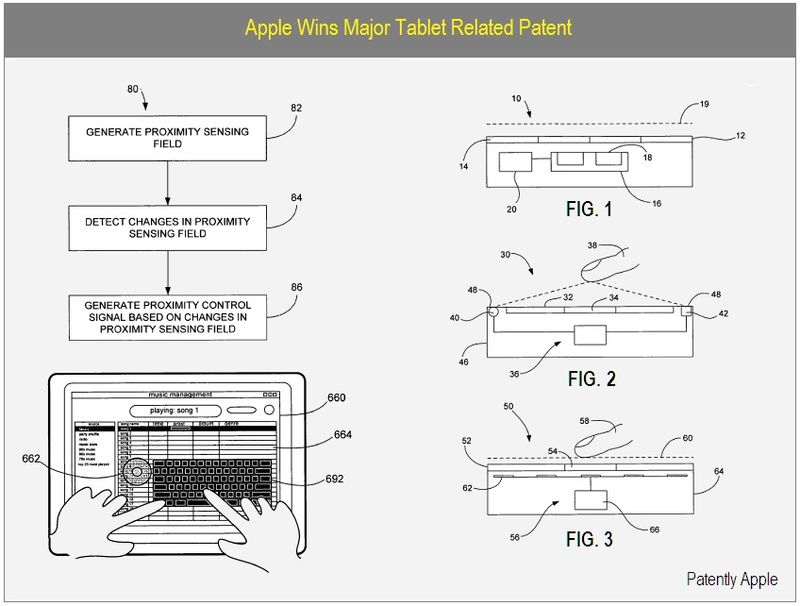 The US Patent and Trademark Office officially published a series of 13 newly granted patents for Apple Inc. today. Without a doubt the granted patent that screams out this morning is one that relates to Apple's forthcoming Tablet. The focus of the patent is on the tablet's proximity detection capabilities. The timing is unbelievable yet crucial in protecting Apple's new technology for larger tablets. Other granted patent notables include a color management system and a crucial patent relating to Apple's iChat.

Apple has been granted a major, if not core tablet centric patent which was covered in our recent tablet miniseries. 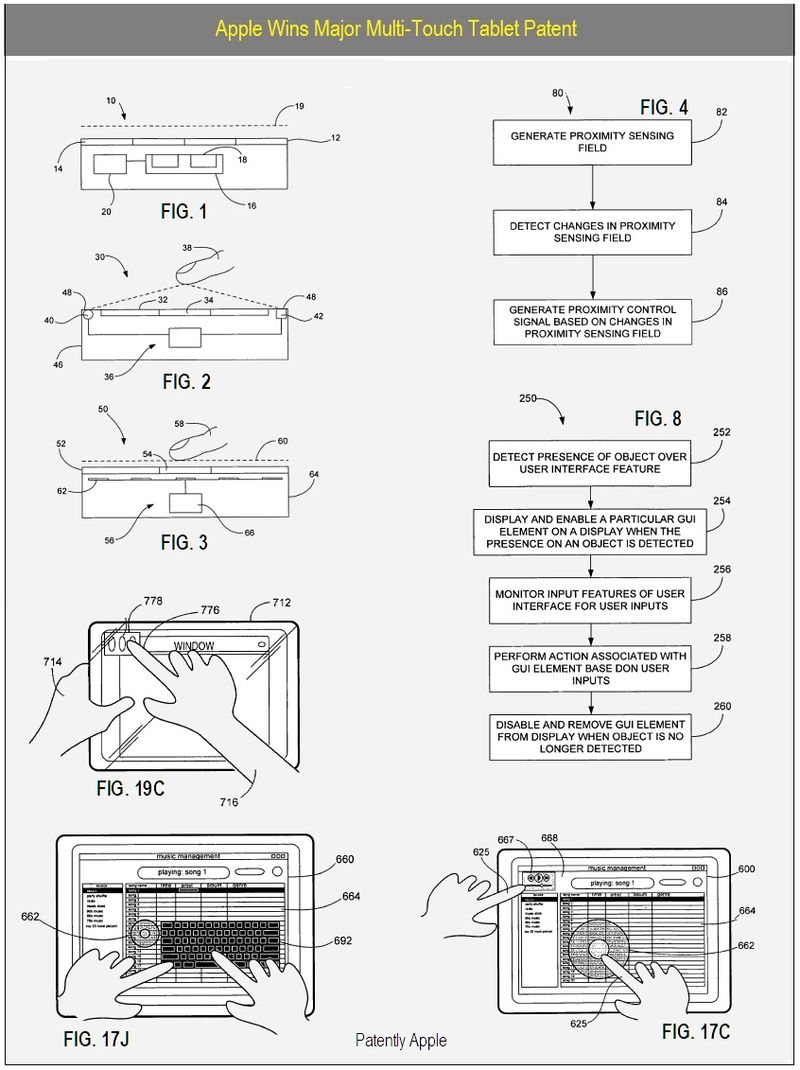 A step-wise approach to automatically determining the bandwidth of a communication channel includes dividing the channel's potential bandwidth into a number of ranges. An initial range is then selected and a series of data packets specific to the selected range are transmitted from a first endpoint to a second endpoint, with the second endpoint determining one or more channel metrics based on the transmitted packets (e.g., measured transmission rates). If the metrics indicate the current range accurately reflects the channel's bandwidth, a measured transmission rate of the transmitted data packets is used as the channel's bandwidth. Otherwise, another range is selected and the process is repeated. The described approach rapidly determines channel bandwidth, even when the channel between the two endpoints is asymmetric. Techniques described herein are particularly beneficial when used in conjunction with multimedia conferencing applications. 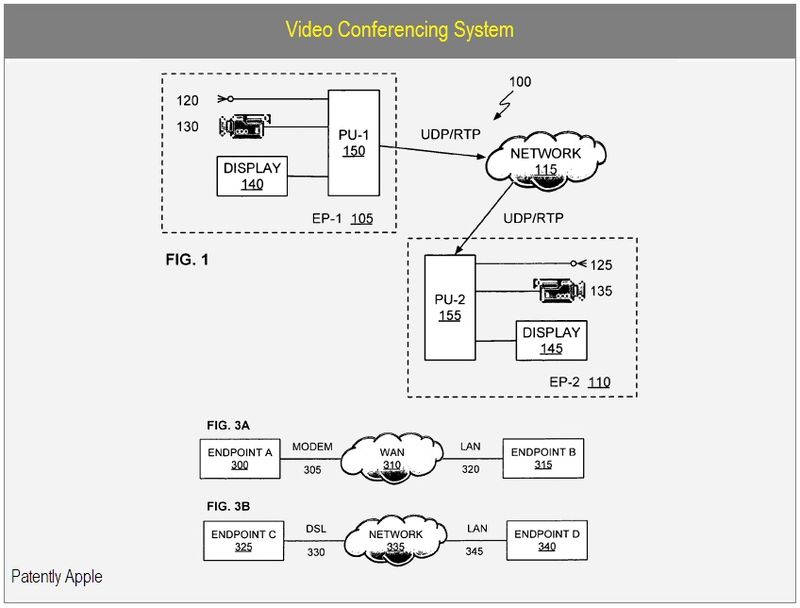 Apple credits Hyeonkuk Jeong and Ryan Salsbury as the inventors of granted patent 7,653,719, originally filed in Q1 2004. One cited document dates back to 2001 which may indicate that this patent was instrumental in Apple's iChat launching in 2003.

Patent Background: Color has the ability to communicate, to please, to excite, and to engage. For example, color makes a difference--often a dramatic difference--in photographs, graphics, layouts and the like. Getting color right early in a workflow, and keeping it right to the end, is increasingly critical in our fast-paced, deadline-driven digital world.

For each device in the workflow, the same combination of numerical color values will yield a different color. For example, a single pixel where R=128, G=128 and B=128 should produce a completely neutral gray tone. On some display devices, this gray will look warm, or reddish. On other devices it will look cool or bluish. These inherent disparities make it difficult to render the colors of an image on differing devices with consistency, accuracy and predictability. Additionally, they make it difficult to render colors of an image on a single display device over time as that display device changes over time. Furthermore, in some cases the content being displayed encompasses a set of colors beyond which the display can represent accurately. In these cases, it is important that the out-of-gamut colors be represented as faithfully as possible on the display.

Photographers, designers and more increasingly, everyday users, are frequently dismayed when they print an image and the color is wildly contrary to what was displayed on their computer screen. These disruptive surprises cost time and money and increase user frustration. 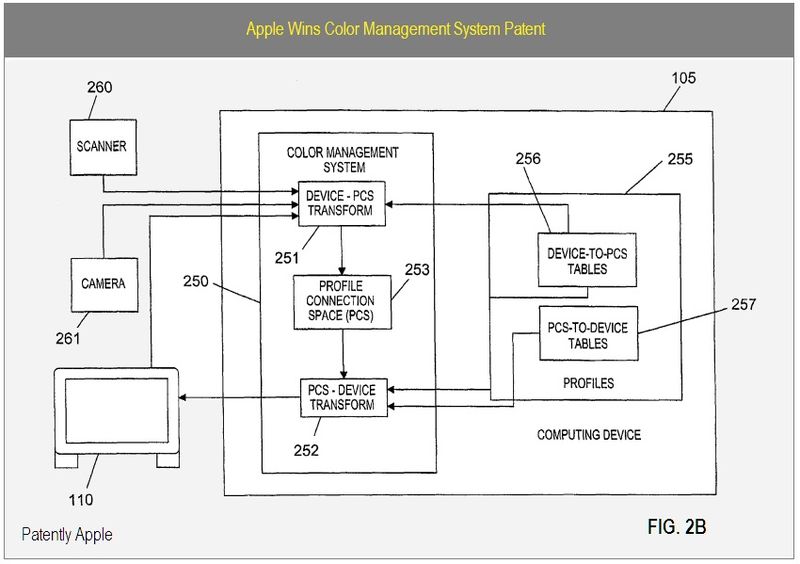 Patent Summary: "Color management profiles are created for display devices using color space characteristic values of the display device. The profile comprises multi-dimensional tables encapsulating the behavior of the display device with relation to color space characteristic values. In some embodiments, the display profile contains multiple dimensional tables that are optimized for different user environments, such as optimizing for saturation, relative calorimetric values, or perceptual display. In some embodiments, the tables are compliant with ICC Profile Specification Version 2 or 4. By using multi-dimensional tables that encapsulate the display behavior in a display profile, a color management system can more accurately and consistently perform color transformations, including in and out-of-gamut mapping." 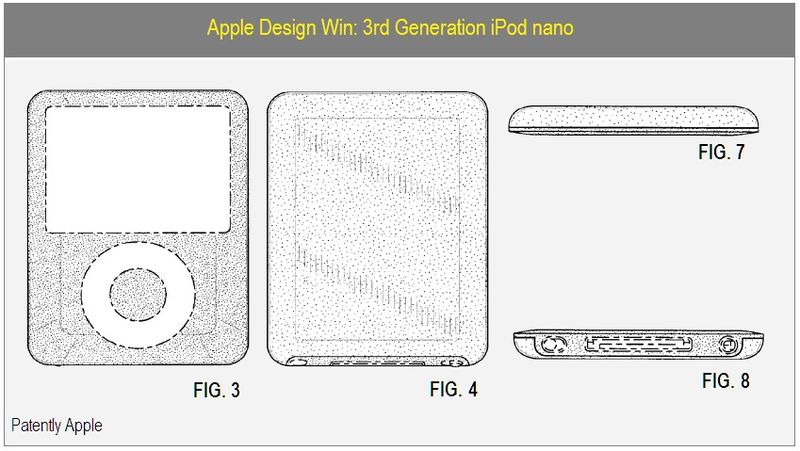 Interface for Providing Modeless Timeline Based Selection of an Audio or Video File: A timeline-based approach for selecting and manipulating audio tracks is presented. This is accomplished via a graphical user interface that provides users with a series of visual cues and enhancements when selecting a particular area of an audio track depicted within the interface. These visual cues are rendered as a display region having multiple other display areas, components or interface components that provide the user with a location for initiating actions upon the file. User input provided to the timeline component generates a selection overlay that indicates a selected area of the audio file. The user can perform numerous actions with that audio file, such as copying and pasting. The user can do this more quickly and efficiently because the user is not required to switch tools. Everything is accomplished "modelessly." Multiple instances of the selection overlay applied, for example, across multiple audio tracks may achieve even more powerful results. For more information, view this temporary link.