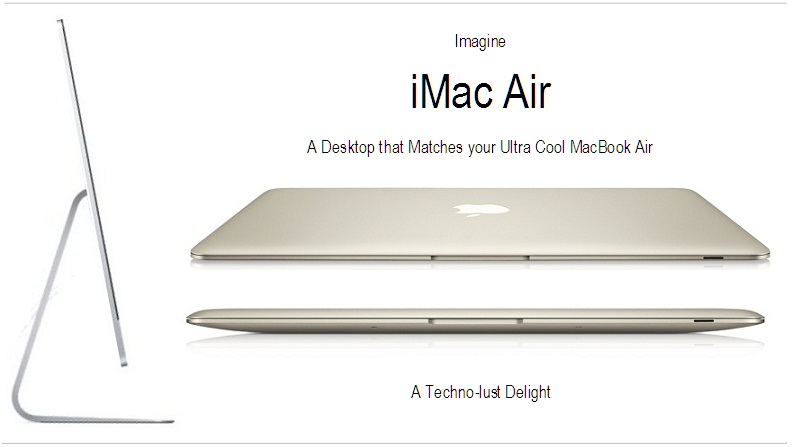 Every once in a while Apple dreams up new ways of whipping the Mac faithful and the press into a frenzy by introducing a new techno-lust delight out of the blue. They did it with the MacBook Air in January 2008. In 2010, their new techno-toy should be the highly anticipated Apple tablet. Yet the question remains, could Apple have more surprises in store for us in 2010? Could one of them be that of a sleek iMac Air desktop to match their MacBook Air delight? Although I personally believe that we'll see Blu-ray finally come to the Mac platform in 2010, many believe that Apple has no interest in doing so. If that logic were to prevail, then the concept of an iMac Air desktop would be a no-brainer. Although such a unit wouldn't appeal to gamers, such a unit would certainly appeal to most casual web surfers and executives who would love to have one grace their desktop. But that's theoretical. It really boils down to what you think about such a futuristic iMac.  Would an iMac Air desktop tempt you?

The MacBook Air Law: If You Lick it, You Own it

Starting at the 1:55 mark of this NBC Today Show video clip, you'll hear Meredith Viera state a classic line that should go down in the MacBook Air's history book: "If you lick it, you own it." If that's not techno-lust, then what is?

Apple's fanatical design team has been on course to make each and every iMac thinner and cooler. And with the advent of 32nm processors coming to market in 2010, it's conceivable that Apple could push the envelope to create their thinnest iMac ever. Think - iMac Air.

In doing so, Apple would give their MacBook Air SuperDrive a wider market to sell into. More interestingly, Apple's design team could conceivably introduce a sleek matching set of aluminum speakers to up the ante and drool-factor.

Then again, what may be possible may not be feasible. Though, at the end of the day, the bottom line is this: If Apple were to surprise the market with such a sexy beast for Christmas 2010, would you line up to buy one? Apple wants to know. Send them a loud message: Yeah or nay? You be the judge.