The US Patent and Trademark Office officially published a series of nine newly granted patents for Apple Inc. today. The notables within this group include one that was covered in our early morning posting titled A Future iPhone will Control Your Desktop Remotely. Other granted patents include a vital patent relating to advanced sensory technology in context with portables such as Apple's iPhone and iPod touch, another relating to a new one-piece iPod connector that has yet to surface (if I'm correct), another relating to EMI or electromagnetic interference shielding used in the iPhone and other products and lastly an industrial design win for Apple's second generation iPod nano.

Granted Patent: Automated Response to and Sensing of user Activity in Portable Devices

Apple's granted patent relates to the field of portable devices and, in particular, to systems and methods for sensing or determining user activities and responding to the user's activities.

Apple's patent FIG. 4 turned out to be the iPhone. Juxtaposed to that is Patent FIG. 6 which shows an embodiment of a wireless device 100 which includes the capability for wireless communication along with multiple sensors 110.

According to one embodiment of the invention, a method includes receiving data from at least one sensor, such as a proximity sensor, at a device, analyzing the data to determine activity of a user of the device, and modifying, in response to the analyzing, at least one setting of the device such as a setting relating to how input data from an input device is processed. The device may be a telephone, such as a cell phone, or an integrated telephone and media player, or other types of devices which can include the sensor and logic to process data from the sensor and the input device may be a keypad or a multi-touch input panel. The sensors may be any one of a variety of sensors including, for example, a proximity sensor, a temperature sensor, an accelerometer, a light sensor, a position determination device, an orientation determination device, a radio frequency electromagnetic wave sensor, a touch input panel, a motion sensor, or a sound sensor. In certain embodiments, the device may include a plurality of sensors which together provide data to at least one processor which analyzes the data to determine activity of the user. In at least certain embodiments, the analyzing may use an artificial intelligence process which includes a comparison of data, derived from the one or more sensors, to a threshold; for example, the data from a proximity sensor may be compared to a threshold value which represents a distance between a portion of the device and the user's ear or head. The data from a sensor may represent an analog value detected by the sensor; the analog value may indicate any one of a variety of analog values including, for example, a distance, a temperature, a light intensity, a measurement of motion or orientation, a measurement of sound intensity or an RF electromagnetic measurement. The artificial intelligence process, in at least certain embodiments, may be required to receive the data and to select an interpretation of the data from a set of possible interpretations, and the interpretation which is selected will in turn be used to decide how to modify the at least one setting. The setting which is modified may be any one of a variety of settings including, for example, a setting of a display illuminator, a setting of a sound input or sound output parameter, a setting of a state of an input device relative to receipt of user input, a setting of a communication parameter, a setting of a processor, or a setting of the mode of the device (e.g. cell phone mode or media player mode).

Apple credits Eliot Danner as the sole inventor of Granted Patent 7,632,114. For more information, view this temporary link. A second related iPod connector patent titled "Backward compatible connector system" was granted under 7,632,146. A third related connector patent titled "Method and system for transferring stored data between a media player and an accessory" was granted under 7,634,605.

Apple's patent relates to the design of computer systems. More specifically, the present invention relates to a method and an apparatus for improving the performance of a computer system by providing an I/O descriptor cache that can be efficiently accessed by bus mastering I/O controllers. 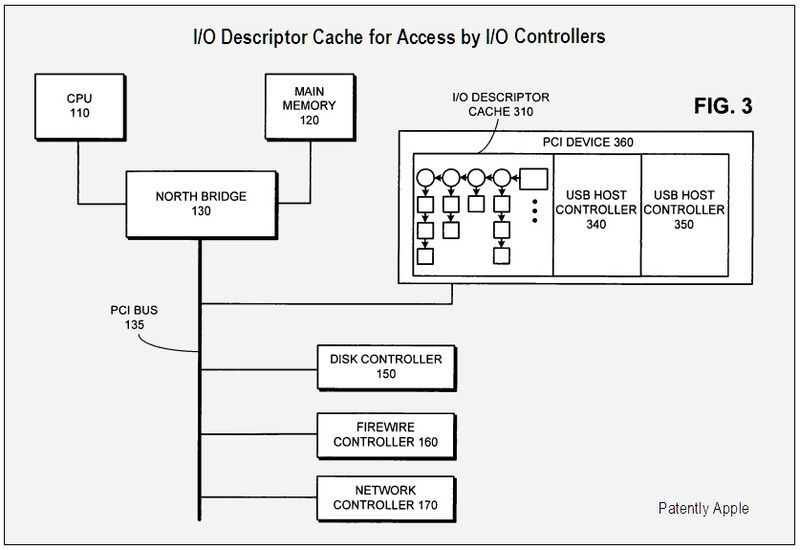 Apple's patent FIG. 3 illustrates an I/O descriptor cache located within a PCI device for access by I/O controllers in accordance with an embodiment of the present invention. One approach to eliminate the need for an I/O controller, such as the USB Host Controller, to access main memory is to place an I/O descriptor cache in the vicinity of the I/O controller. Such a configuration allows the I/O controller to access frequently used data without going to the main memory, thereby saving power in the CPU cache-coherence circuitry and freeing up I/O bandwidth and memory bandwidth. 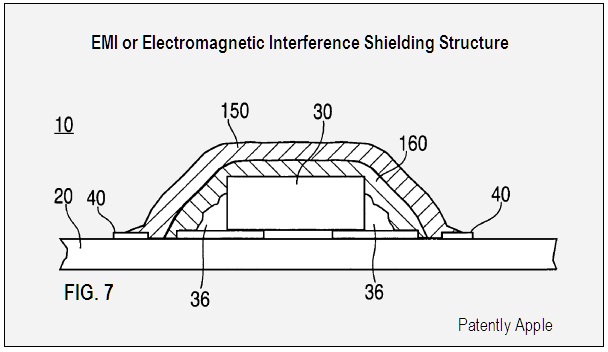 Apple's patent FIG. 7 shows an illustrative embodiment of how electronic circuitry components 30, mounted on a PCB 20 may be shielded more compactly than in prior art. FIG. 7 shows a starting structure. Then a layer of conforming electrical insulation 160 is applied. Thereafter, a layer of conforming, electrically conducting, EMI shielding 150 is applied over insulation 160 so that the EMI shielding reaches and makes contact with ground contacts 40.

While EMI (Electromagnetic interference) at 2.4 GHz can be caused by 802.11b and 802.11g wireless devices like Apple's Airport Express, the likely target of this granted patent would be Apple's iPhone. 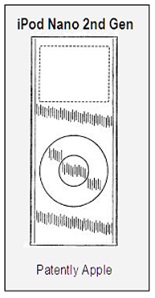