On December 10, 2009, the US Patent & Trademark Office published a patent application from Apple revealing the next chapter for Media Player navigation. Apple's Media Player revolution began with touch displays for navigating menus and now Apple wants to introduce one-handed acceleration navigation methodologies that could also be used with future systems including a television. The technology will be both built-into future media players and available for older media players via a new accessory. Apple provides us with an overview of the range of motion that acceleration navigation encompasses such as the Flick, Slide Twist, Spin, Tilt, rotation and up and down motions and so forth. If you don't mind looking like a spaz, then this form of gesturing will certainly accelerate your one-handed functionality. That could come in handy while working out, jogging or even mountain climbing. Okay, the last one was a joke - so sue me.

At the heart of this patent, we see that Apple is considering implementing a secondary navigation system for future media players. In addition, Apple will also allow users to breathe new life into their older media players via an Apple accessory noted above in Apple's patent FIG.1.

Apple states that accessory device 104 can, for example, enable and/or enhance the acceleration navigation functionality of handheld device 102. The accessory could include one or more accelerometers that would be able to detect a flicking or other acceleration-related motion (e.g., shaking, spinning, tilting, turning upside down, sliding, etc.).

Apple's FIG. 3 is an overview of an exemplary media player such as an iPhone which would include a control processor 302, storage 304, memory 306, communications circuitry 308, input/output circuitry 310, accelerometer 312, display circuitry 314 and/or power supply circuitry 316. It could also include specialized input circuitry associated with e.g., one or more microphones, cameras, proximity sensors, accelerometers, ambient light detectors, etc. In some embodiments, power supply 316 could be coupled to a power grid (e.g., a wall outlet or automobile cigarette lighter).

In Other embodiments, accessory device 106 could be electrically coupled to the media player (102) wirelessly. Accessory device 104 could then act as a remote control and be used to wirelessly navigate and control the media player (102). The media player and accessory deice could exchange information using Bluetooth. I'm not sure why you'd want to do this, but in light of the fact that there's an indirect mention of a television - it may suggest that your Apple media player linked to your TV could be controlled via the accessory doubling as a remote that is based on one-hand acceleration navigation. So you'd be able to technically, flip a page on your TV menu or scroll up and/or down depending on the menu you're navigating. It could also work nicely with iPhoto on your TV etc.

Apple's patent FIGS. 4-7 are depictions of representative interactive user interface displays according to some embodiments of the invention.  Simple user input devices, though easy for users to use, limit how a user can navigate within a display and menu hierarchy. Moreover, multi-touch display screens, although very intuitive and simple to use, may require the use of two hands in certain applications - one to hold the device, the other to make selections by tapping the screen.

Acceleration navigation, according to some embodiments of the invention, allows a user to use a multitouch or any other type of device with just one hand. 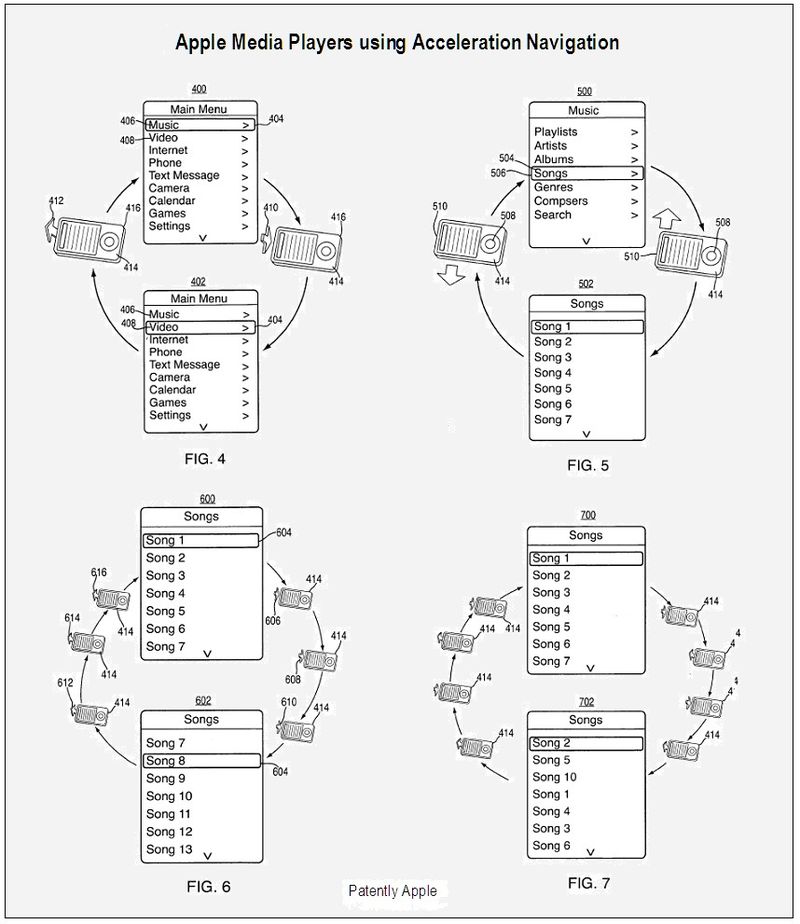 Flick, Slide Twist, Spin, Tilt Motions: In some embodiments, when a number of data outputs are received from one or more accelerometers, device 414 can differentiate, for example, different types of acceleration-related movements (e.g., flick, slide, twist, spin, tilt, etc.), relative timing of each and the directions of each. Device 414 can base its response on, for example, the predominant motion or motions.

For example, the primary difference between downward vector 410 and upward vector 412 is the direction of the vector. Downward vector 410 is primarily directed towards the back of device 414 (assuming the front surface is the surface with the display screen). Upward vector 412 is primarily directed towards the front of device 414. The circuitry of device 414 can utilize any number of means to determine the predominant, or sometimes referred to herein as prevailing, direction of an acceleration event. For example, the predominant direction determination can be based on an average of all the detected vectors (e.g., up, down, left and right), the initial vector's direction, or by any other means. 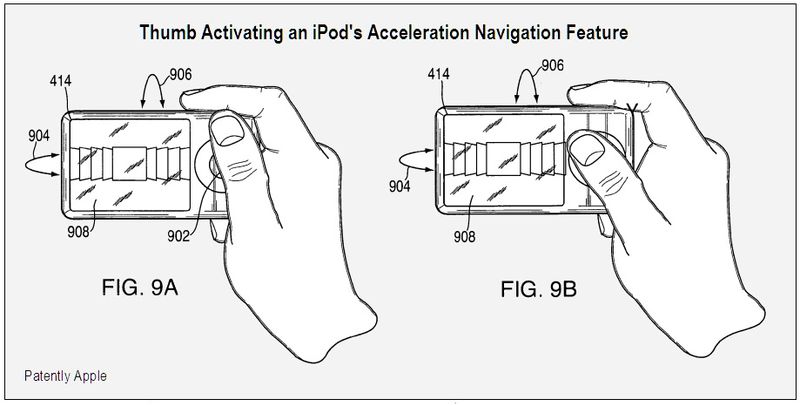 The user's hand shown in Apple's patent FIG. 9 is holding device 414 and the user's right thumb is not touching or depressing button 902. Button 902 can serve as the acceleration navigation activation button as well as the selection button of a click wheel. To activate acceleration navigation, button 902 can detect a touch event, which can be different from a depression event. A depression event, for example, can require the user to apply more pressure, where as a touch event can occur in response to the user gently resting a finger on button 902.

It is an advantage of the present invention to provide metallic or otherwise rigid cantilevered push buttons having multiple electrical contacts that also do not require the non-actuated ends of the buttons to rise when the actuated ends are pushed inward. This can be accomplished at least in part through the use of multiple fulcrums about which the cantilevered push button can pivot, with the fulcrum being determined by which end of the button is pushed. 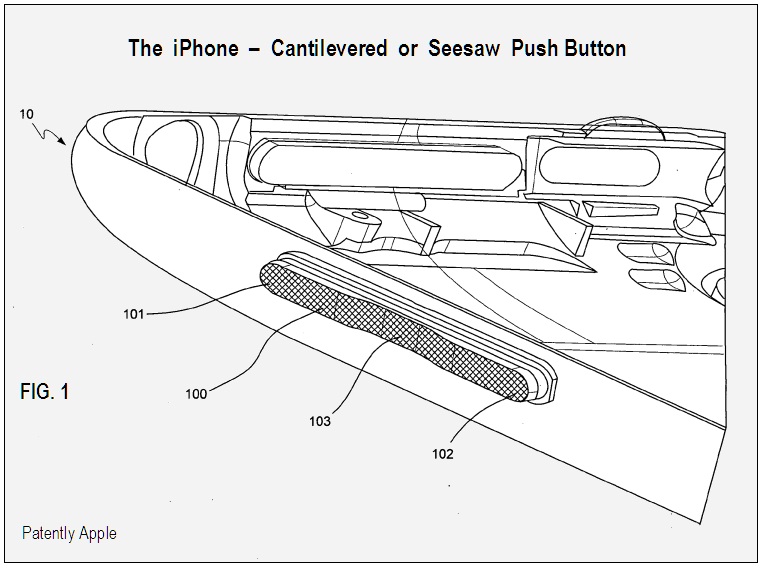 Apple's patent FIG. 1 illustrates in side perspective view an exemplary cantilevered button along the side of an outer housing for an associated cellular telephone.