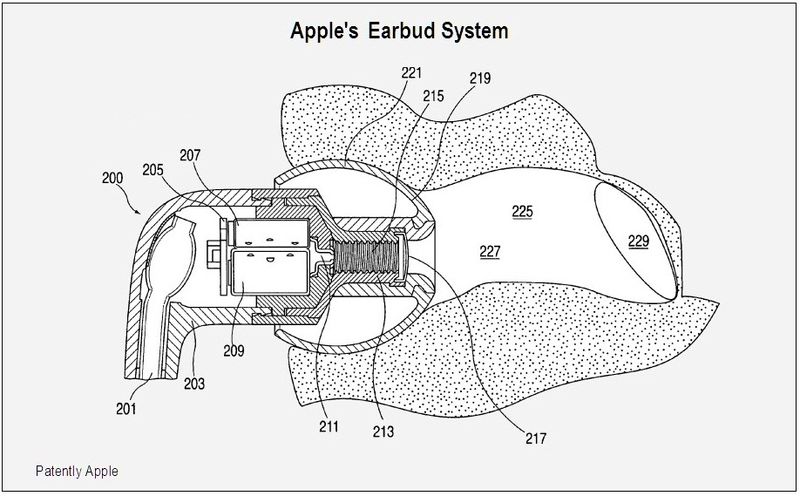 The US Patent and Trademark Office officially published a series of eight new patent applications for Apple Inc. today. The notables within this group includes a crucial patent relating to Apple's advanced touch screen technology having an array of co-planar single-layer touch sensors fabricated on a single side of a substrate for detecting single or multi-touch events. Other notable patents include one relating to a new higher-end earbud system for Apple's media players, another relating to Cryptography and Key Generation and finally, one that relates to a heat-transfer mechanism that includes liquid-metal thermal coupling.

Apple's patent generally relates to input devices for computing systems, and more particularly, to a touch sensor panel capable of being fabricated on a single side of a substrate. 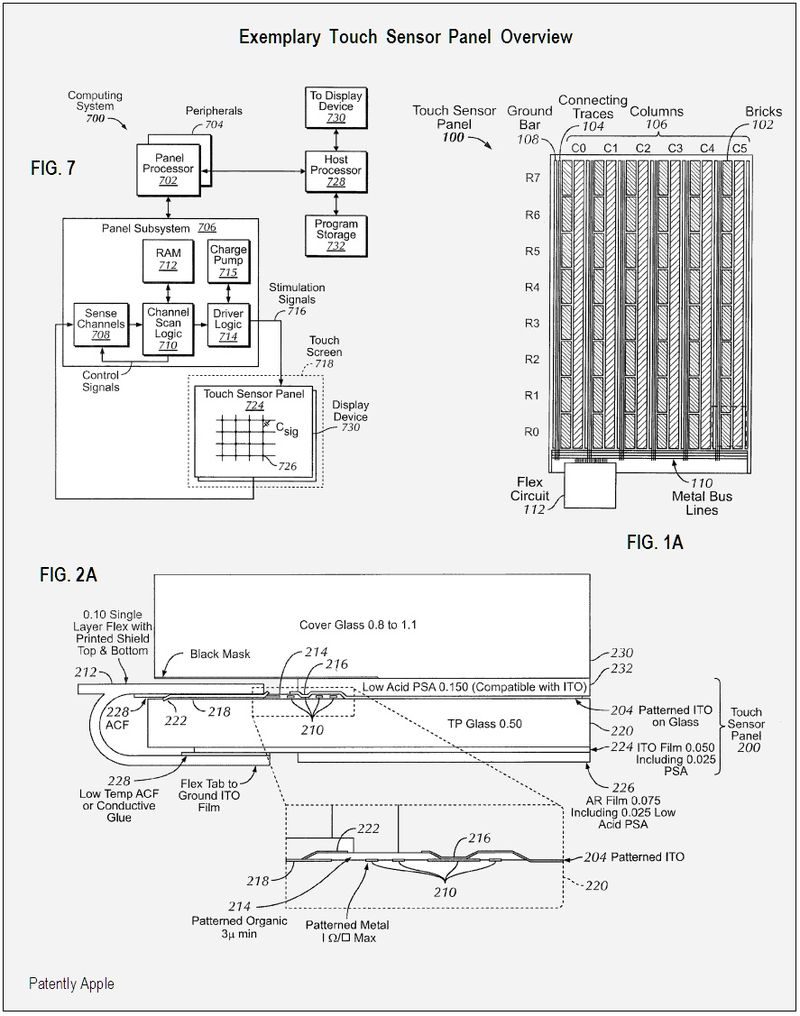 The Patent Overcomes these Problems

In other touch sensor panels, the drive and sense lines can be formed on the top and bottom sides of the same substrate. However, touch sensor panels having row and column lines formed on the bottom and top sides of a single substrate can also be expensive to manufacture, because thin-film processing steps must be performed on both sides of the glass substrate, which requires protective measures for the processed side while the other side is being processed.

Apple's patent relates to a touch sensor panel having an array of co-planar single-layer touch sensors fabricated on a single side of a substrate for detecting single or multi-touch events (the touching of one or multiple fingers or other objects upon a touch-sensitive surface at distinct locations at about the same time). The sense (or drive) lines can be fabricated in a single strip as columnar or zig-zag patterns in a first orientation, and the drive (or sense) lines can be fabricated as rows of polygonal (e.g. brick-shaped or pentagonal) conductive areas in a second orientation. Because the drive and sense lines can be formed on the same layer, manufacturing costs can be reduced and the touch sensor panel can be made thinner. Each sense (or drive) line in the first orientation can be coupled to a separate metal trace in the border area of the touch sensor panel, and each polygonal area in the second orientation can also be coupled to a metal trace in the border area of the touch sensor panel. The metal traces in the border areas can be formed on the same side of the substrate as the drive and sense lines. The metal traces can allow both the row and column lines to be routed to the same edge of the substrate so that a small flex circuit can be bonded to a small area on only one side of the substrate.

In some embodiments, the connecting traces are routed along only one side of the bricks (a so-called "single escape" configuration). To couple the bricks in a particular row together, connecting traces, which are also formed from a conductive material, can be routed from the bricks along one side of the bricks in a single escape configuration to a particular bus line. Connections for each bus line and for the columns can be brought off the touch sensor panel through a flex circuit. 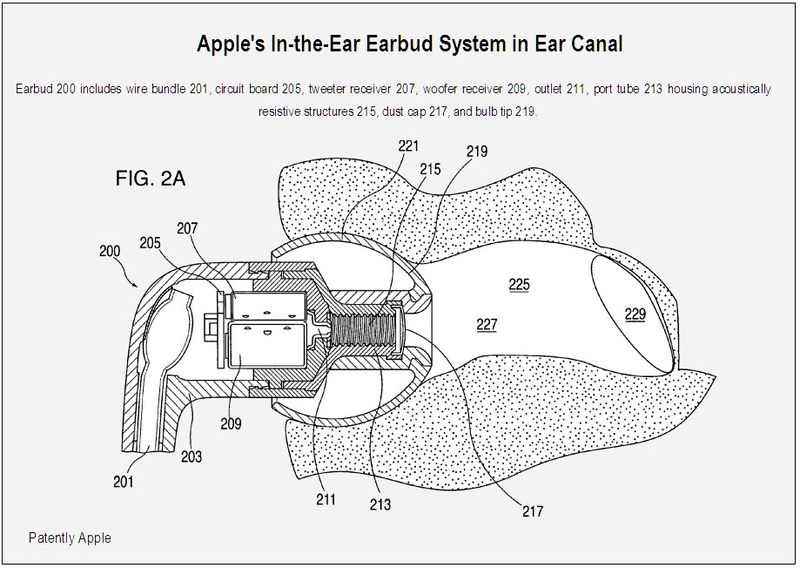 The interior of an exemplary receiver encasing a transducer is shown in FIG. 2B below. Receiver 250 generally includes an outer casing 259 containing an armature 251 that drives a diaphragm 252 back and forth. The movement of diaphragm 252 compresses and decompresses the air inside encasement 259, creating sound waves. The sound waves propagate out of the receiver through outlet 253. 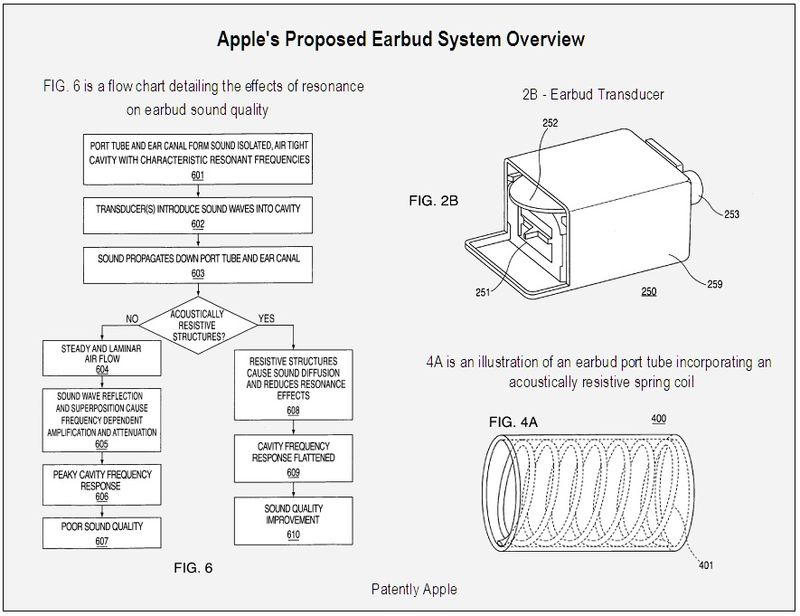 Apple's patent goes into very high detailing of sound and every minute detail of their new earbud system imaginable and covers such topics as the Helmholtz resonator. If you're a techie audiophile, then you'd appreciate the patents detailing.

Apple credits Victor Tiscareno and Kurt Stiehl as the inventors of patent application 20090316944.  For more information, view this temporary link.

A Patent Related to Data Security - Cryptography and Key Generation

Apple's patent relates to data security and cryptography and key generation. A computer enabled secure method and apparatus for generating a cryptographic key, to be used in a subsequent cryptographic process, where the key is to be valid only for example during a specified time period. The method uses a polynomial function which is a function of an input variable such as time, and dynamically computes the key from the polynomial. This is useful for generating decryption keys used for distribution of encrypted content, where the decryption is to be allowed only during a specified time period. 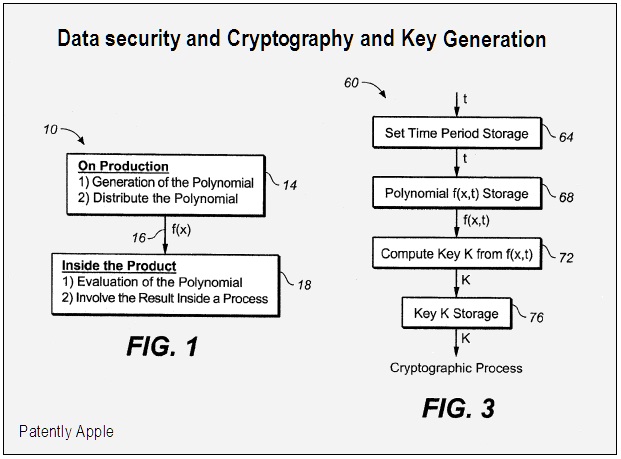 The computational performance of electronic devices has increased significantly in recent years. This has caused an increase in power consumption and associated heat generation. It has consequently become a considerable challenge to manage this `thermal load` to maintain acceptable internal and external operating temperatures.

Portable electronic devices, such as laptop computers (notebook PCs), cellular telephones, and personal digital assistants, pose additional design constraints which make it harder to manage thermal load. In particular, size and weight limitations in such devices can make it difficult to achieve desired operating temperatures. For example, some laptop computers utilize heat-transfer mechanisms that include a heatpipe which transports heat from a heat source, such as a processor chip, to a condenser. Heatpipes are efficient at transporting heat, but because of fluidic and thermodynamic losses, the total length of the heatpipes in laptop computers is effectively constrained to be about 150 mm. Moreover, heatpipes typically do not offer mechanical flexibility. Unfortunately, these constraints pose problems in the design and layout of heat-transfer mechanisms in such systems. 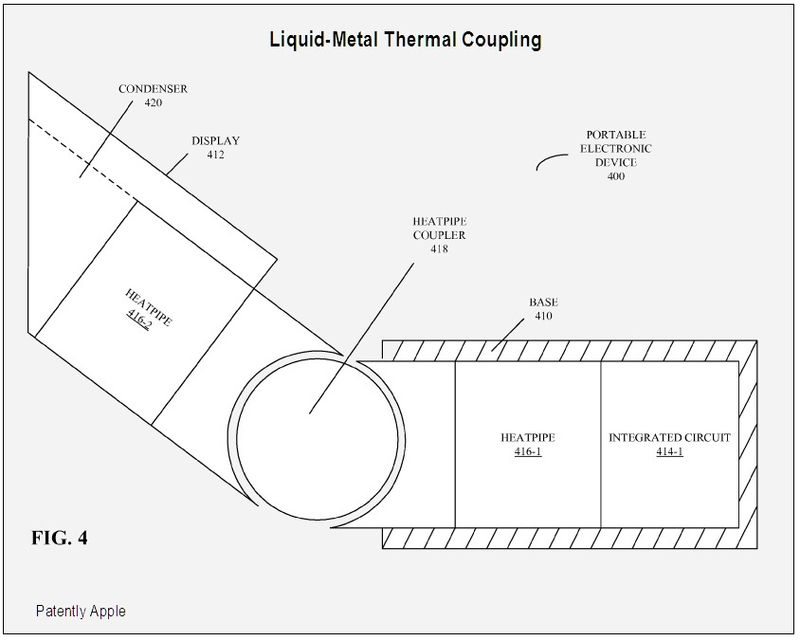 Apple's patent FIG. 4 presents a block diagram illustrating a MacBook Pro which includes a base 410 and a display 412, as well as one or more integrated circuits, such as integrated circuit 414-1, which generate heat during operation. Moreover, a heat exchanger, such as one of the embodiments of the heat-transfer mechanism described previously, may transfer this heat from an enclosed area in the portable electronic device 400 to an external environment. For example, heatpipes 416 may be thermally coupled by heatpipe coupler 418, which includes a liquid metal, and which allows rotation of the display 412 relative to the base 410, thereby functioning as a hinge. Heatpipe 416-2 may by coupled to condenser 420, which is included behind the display 412, and which leverages the large surface area that is available to transfer the heat to the external environment.

Update: Another site is illustrating a number of 2007 patents claiming to be current. The first 2007 patent is titled "Keystroke Tactility Arrangement on a Smooth Touch Surface" under patent 20070247429. The second 2007 patent is titled Multipoint Touch Surface Controller, under patent 20070257890. There was no "new patent application revealed this week" pertaining to tactile feedback when typing - as was indicated in a byline appearing on MacSurfer today. The last patent pertaining to a virtual keyboard was filed in November 2009.