Apple's patent FIG. 1 is a schematic view of an electronic device that may include a display, a sensing mechanism (104) and control circuitry (110). It may also include communications circuitry and/or other components.

Apple's patent states that device 100 may work with any suitable device operative to display information to a user. The display may be associated with an iPod, iPhone, any MacBook, iMac/Mac Pro desktops and so forth.

Device 100's display may include any suitable screen or projection system for providing a display visible to the user. That could translate into an LCD, a movable display or a projecting system for providing a display of content on a surface remote from the electronic device. A June 2009 patent application of Apple's first presented us with information regarding a pico projector and in yesterday's report on Augmented Reality, a video presentation by MIT's Pranav Mistry illustrated how a pico projector projected photos from a SixthSense device onto an adjacent wall so that he could manipulate the photos just taken from his SixthSense-camera and then email them to a colleague or friend from the projected interface on the wall.  In today's patent, Apple's ability to do such will be enhanced using a unique 3D environment that could be projected onto a wall or just seen on a computer's display.

In some embodiments, the sensing mechanism may be incorporated in or [on an] adjacent display 104 (e.g., a camera incorporated above a laptop screen), another component of electronic device 100, or near any other portion of the electronic device. In one implementation, sensing mechanism 106 may include a wide-angle lens embedded above display 104 (e.g., such that the user viewing the display may be framed by the lens).

The use of a camera is the corner stone of presenting Augmented Reality. In yesterday's report on this subject, as noted above, a Coke Zero Avatar AR video was presented that makes this point crystal clear. The camera is able to sense the user's positioning so that the animated aircraft is in proportion to the screen and is also able to be manipulated by the user in such things as directing the aircraft's movements.

In respect to a camera's use, the patent states that using a camera - the electronic device may detect the user's face from the background (e.g., based on particular attributes of a human face, or based on the difference in shape or color between the background and the user), and determine the position of the user's head in the field of view of the camera. As another example, the electronic device may use an IR or heat-sensitive camera, or an optical camera with an adequate lens to distinguish the user's body (e.g., the user's head or torso) from the background to determine the position of the user relative to the camera field of view. This approach may be particularly useful in low light or night situations.

The parallax approach illustrated in FIGS. 3 and 4 below may be applied to change the appearance of icons displayed on the display based on the detected position or movement of the user. For example, Apple's OS X dock will be able to present the user with a true 3D perspective no matter where the position of the user is to the display. Wikipedia presents an animation that clarifies this technology approach. 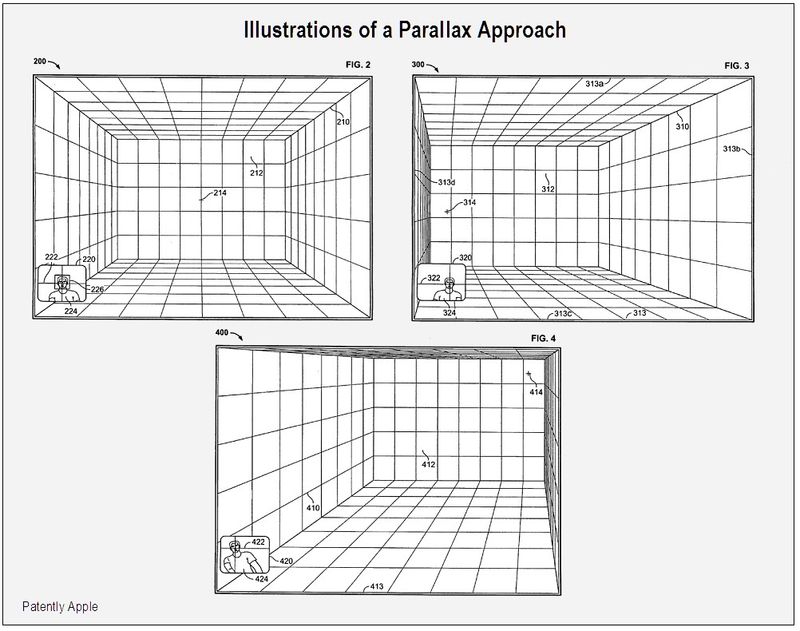 Take note of each of the graphics lower left corner. What you're seeing is how the new iSight camera will target your head and change the perspective of the screen accordingly. This is very, very sophisticated and cool technology. (Note that you could click on this graphic once, and when you see the image, click on it again to get a larger image. No, you can't double click the image to see that.) 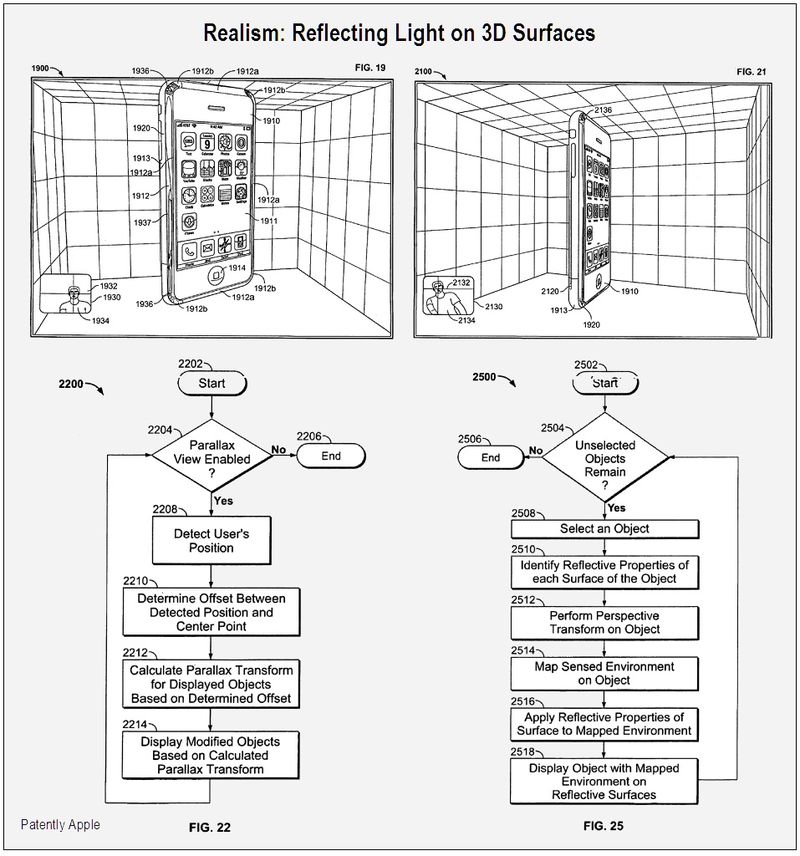 In addition, the electronic device may determine, from the physical properties and shape of each surface of the object, the manner in which image 1932 may be reflected on different surfaces of object 1910. For example, surface 1912 may be a polished metal surface that is highly reflective, and may reflect image 1932 well. As shown in display 1900, surfaces 1912b, which may be curved, may include reflections 1936 of user 1934. Surface 1912a - which is substantially straight - may include a different reflection 1937 of user 1934. Each reflection 1936 and 1937 may be distorted, for example based on the shape of each surface from which the image of user 1934 is being reflected. Other surfaces, for example surface 1913, may be diffuse such that light may be reflected, but no discernable part of image 1932 (e.g., as shown in FIG. 20, where the user's position relative display 2000 and the orientation and shape of surface 1912 is such that the detected image is not reflected back to the user).