The US Patent & Trademark Office published a patent application from Apple today that introduces us to a very unique music/content playback control form and monitoring system. Finally someone at Apple has figured out a way so that we could take more control of our tunes that makes sense. Some tunes only have a single great riff and that's about it.  With the new iTunes Music Form, you'll be able to set the starting and end points of a tune, set the tune volume and equalizer settings as well. If you like being the DJ at parties, then this could be a very cool tool allowing you to control the length of tunes and how they'll mix and match up with the next tune. The system will apply to all of Apple's media players with a display – including a television. This idea is going to make a lot of music fans happy. 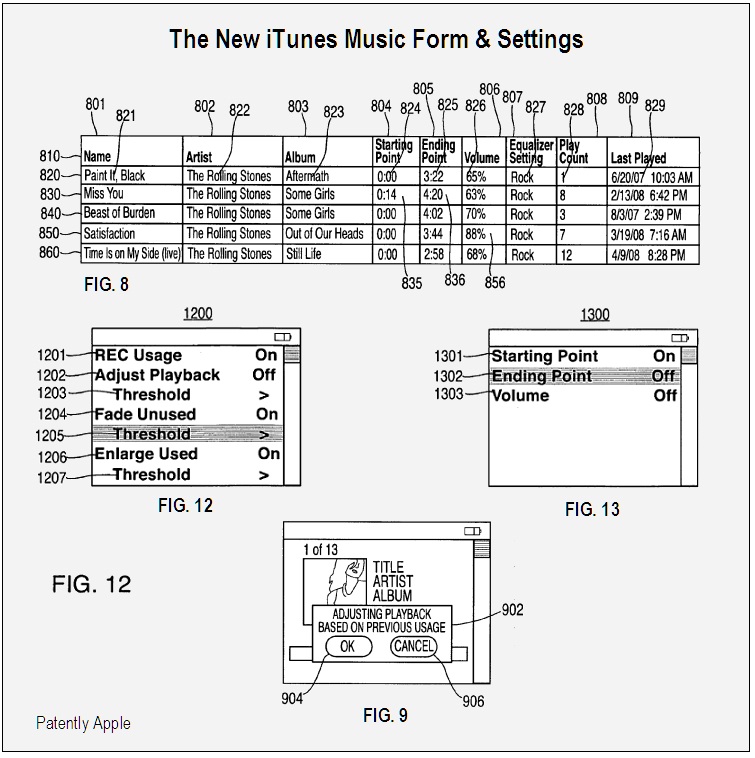 If you look through the horizontal data related to Paint It, Black – you could clearly see that the new iTunes Music Form (my name for this structure, not Apple's) will allow you to set the tune up as you prefer to play it. Meaning, you may have an abnormal starting and ending points for a particular tune. Let's face it, some songs have a great riff and then either go-stupid or endlessly repeats. Now you can control that song. That's absolutely brilliant though I'd prefer better song writing – but that's not Apple's fault. For now, Apple is going to give us control over our songs like never before.

Beyond setting starting and end points, you'll be able to control the sound level you want a particular tune to play at and set the equalizer settings as well. You'll be able to set up your forms either on your media player, computer or television.

Apple's patent FIG. 9 shows a schematic view of an illustrative display screen for displaying a notice regarding the adjustment of a playback characteristic.

For example, an electronic device may cue a file based on usage metadata and then, for a limited period of time, give the user an option to start from the beginning of the file. In the illustrative example shown in FIG. 9, notice 902 may include "OK" option 904 and "Cancel" option 906. A user may select "OK" option 904 to approve the adjustment (e.g., using user input component 104 or a touch screen), and notice 902 may subsequently disappear as the adjusted playback continues. If a user does not approve of the adjustment, the user may select "Cancel" option 906, and, the adjustment may be cancelled. In some embodiments, a notice may not provide an approval option and only provide a cancel option such that a user can approve of an adjustment by not providing input, and the notice will eventually disappear.

Apple's patent FIG. 15 is a flowchart of an illustrative process for adjusting a characteristic of media file playback. Process 1500 can be performed by most of Apple's media players that have a display. In the case of Apple TV, the TV will act as the display. 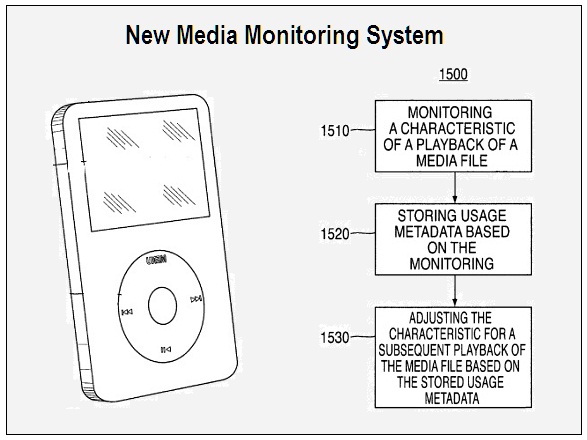 Apple credits Benjamin Rottler, Kourtny Hicks and Eric Hope as the inventors of patent applications 20090313544 and 20090313564. Policarpo Wood is noted only on the former patent.