Ads are Coming to the App Store

More than likely sometime in 2010 when you access the App Store via your iPhone or iPod touch,  you'll be greeted by one or several advertisements for the first time. Well, that's if Apple's patent FIG. 14 shown below comes to pass. 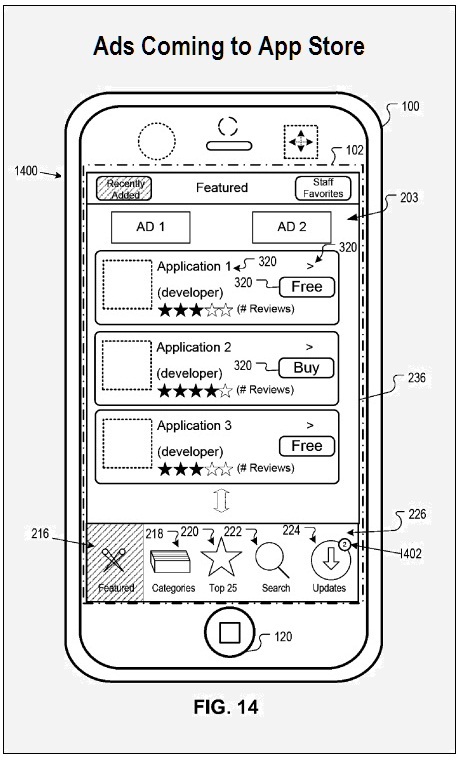 In October, a report titled Apple Prepares to Rock the Market with Hardware Subsidizing Program stirred up a hornets' nest for some reason. It was the first real evidence of Apple considering a hardware subsidizing program in the future. Under the right circumstances, I think the program would open the Apple hardware door to millions of young people wanting to try-out a Mac or iPhone that can't otherwise afford one.

That being said, adding ads to the iPhone/iPod touch App Store UI appears to be on its way. Will that raise your ire as well?

Make a comment – and make your position known to Apple, either way.

Notice: Patently Apple presents only a brief summary of patents with associated graphic(s) for journalistic news purposes as each such patent application and/or Granted Patent is revealed by the U.S. Patent & Trade Office. Readers are cautioned that the full text of any patent application and/or Issued Patent should be read in its entirety for further details. Apple's patent was published in Q3 2009.

Many of the aps being submitted are nothing more than ads for
the product or service being offered. If I were Apple, I would select
as a start a key market such as realestate, for example, and make an app store
just for that market. Maybe expand to personals; then restuarants, etc.

Apple can simplify this by allowing people to make their widgets, like
we do in Safari now or build templates within Mobile Me.

The app store has turned out to be a big surprise and I think
it can be even bigger if apple would diversify it.

This represents the current App Store. The "AD Blocks" are placed by Apple for internal iTunes Store marketing promotions. tho it would make sense for apple to open a new revenue steam with possible third party co-promotions with money changing hand. Which I would think isn't happening because im sure everyone would currently have a say about it... Apple isn't in need of ad revenue from the App Store at least not yet, after-all the current mobile device hardware all has individual product margins of 40-50 percent

With so many apps available for free, it only stands to reason that Apple wants to generate a little cash. Apple should pool the advertising money or revenue and then divide it amongst the top 100 freebie apps to encourage better apps or budding developers.

Apple badly needs this sort of revenue as a countermeasure against Google. Google is grabbing basically free cash with ad clicks. Apple needs to do the same. I'm sure Wall Street and Apple investors would agree. Companies should pay to get advertising of their products on the iPhone and Apple should also get paid by advertisers every time an iPhone user clicks on an ad. That would be almost an unlimited revenue stream. Apple also needs it's own search engine as a way to slow down Google's cash cow search engine. Apple needs to get with the program or Google will just leave Apple in the dust and soon pass Microsoft.