Jonathan Ive: When you first see the mouse, it could not be any simpler. But I love the way it scales from being something that is that apparently simple to actually being really remarkably sophisticated. I mean, we finally figured out how to take the multi-touch technology and implement it on a mouse. It's still a point and click mouse but now the entire top surface of the mouse is basically a multi-touch sensor.

Apple's patent FIG. 5 is an exploded perspective view of an exemplary double-sided ITO (DITO) substrate 500 (with its thickness greatly exaggerated for purposes of illustration only) with columns 502 and rows 508 formed on either side according to embodiments of this invention. Some of column ITO traces on the top side are routed to a necked-down connector area 504, where they are brought off the panel by a flex circuit portion 506 that can be conductively bonded to the top of DITO substrate. In some embodiments, row ITO traces on the bottom side can be connected to thin metal traces 510 that run alongside the edges of the bottom side. 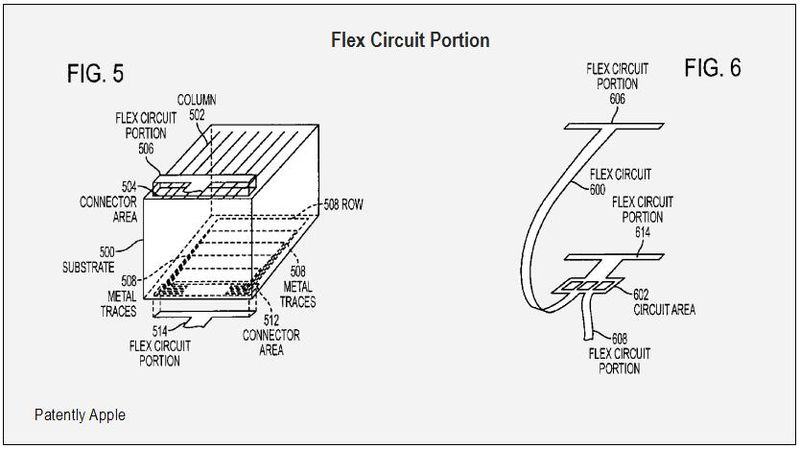 Apple's patent FIG. 6 above illustrates an exemplary flex circuit 600 including flex circuit portions 606 and 614 for connecting to the row and column traces, respectively, on either side of a DITO substrate, and flex circuit portion 608 for connecting to a host processor. The Flex circuit includes a circuit area 602 upon which the multi-touch subsystem, multi-touch panel processor, the high voltage driver and decoder circuitry (see FIG. 1), an EEPROM and some essential small components such as bypass capacitors can be mounted and connected to save space.

Apple's patent FIG. 16A shown below is an embodiment of a first conducting layer 1600 of a touch sensor array that may be adhered to a curved surface. The touch sensor pattern shown in FIG. 16A includes touch sensor row elements 1606, 1608, and 1610. 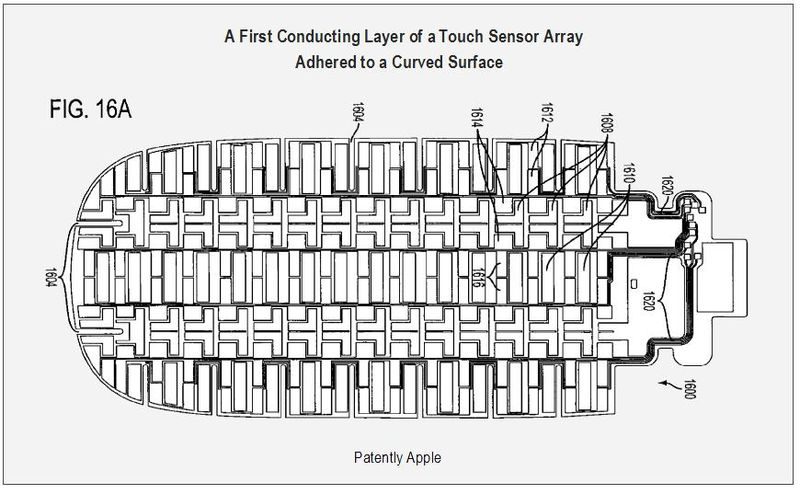 The curved or 3-d shaped touch sensor patterns may be placed under or over a curved substrate, for example, a glass or plastic cover. These touch sensors patterns can be used in a variety of multi-touch devices, for example a multi-touch mouse, a personal computer touch pad, a media player, or mobile telephone.

Update: It should be noted that the Magic Mouse fulfills Apple's patent for a multi-touch mouse published in June 2008.