Apple May Repurpose Bluetooth Headset into Next Gen iPod Shuffle 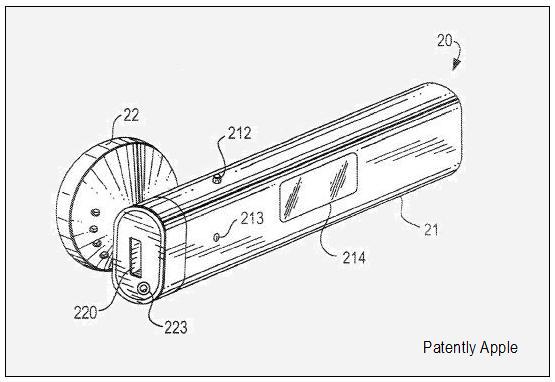 Apple may have dropped their Bluetooth headset in March, but according to a patent application revealed today, they may have done so in an attempt to actually reinvent or repurpose the design and technology into a next generation iPod Shuffle. Apple clarifies their intent in the conclusion of their patent by stating: "Thus it is seen that a wireless headset with integrated media player and/or recorder has been provided." We know that Apple's iPhone 3.0 supports A2DP Stereo Bluetooth connectivity and so this type of unit was bound to resurface in one way or another. The new unit is shown to offer an easy to use USB connector for recharging, a mini LCD screen to view basic iTune information and includes an integrated earbud with options of expanding that to a full stereo headset.

In addition to being an iPod Shuffle, the media player will include a recording function as well, so that a user can record voice notes or record parts of a conversation either on an iPhone or a landline, states the patent. Similarly, voicemail messages received on the user's telephone could be uploaded into the headset for later off-line playback.

Although the patent discusses a USB connector option that is similar to the standard used with Apple's iPhone and iPod family today, an alternative is being proposed for this unit that should be adopted, in my view. The USB connector 221 is shown to provide a removable cap 222 to protect the connector when not in use. It could also be retractable. 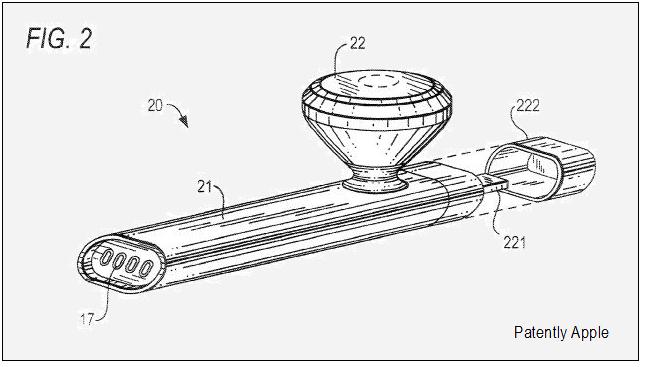 In Apple's patent FIG. 4 shown below, we see a stereo headset, having, in addition to primary housing 21 and earbud 22, a secondary earbud 42 connected to primary housing by arm 41. The arm could be permanently attached, or could be both mechanically and electrically detachable so that the headset could be used in either monaural or stereo mode. Apple's patent FIG. 5 below, notes that the alternative stereo headset could be permanently attached or be detachable to allow monaural or stereo operation. For example, a user may want to have a stereo headset when in a leisure environment, but a monaural headset when in an environment in which the ability to hear ambient noises and sounds is important, such as while driving. 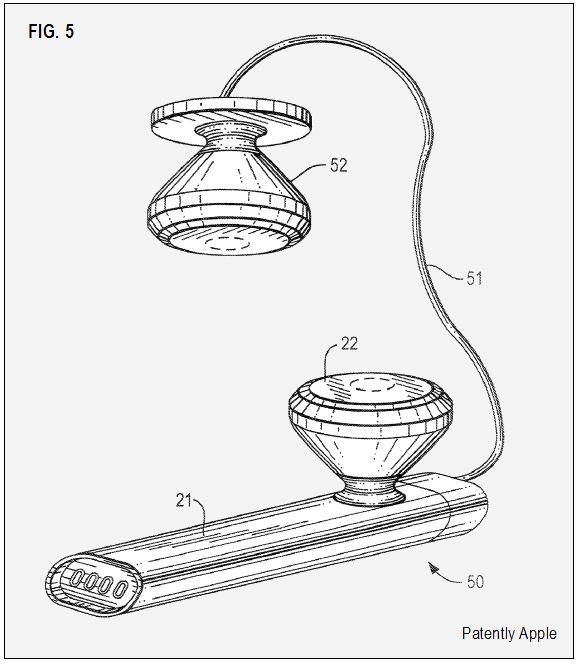 The patent notes that wireless headsets of this type typically have a small form factor. Accordingly, not much room is available for a user interface for the media player portion of the integrated headset/media player. In accordance with the invention, a minimal user interface may be provided that allows the user to select stopping and starting of playback of stored content, as well as control of recording. For example, small "start," "stop," and "record" buttons may be provided. Corresponding visual indicators, such as light-emitting diodes, might also be provided as an indication of the current operating mode. 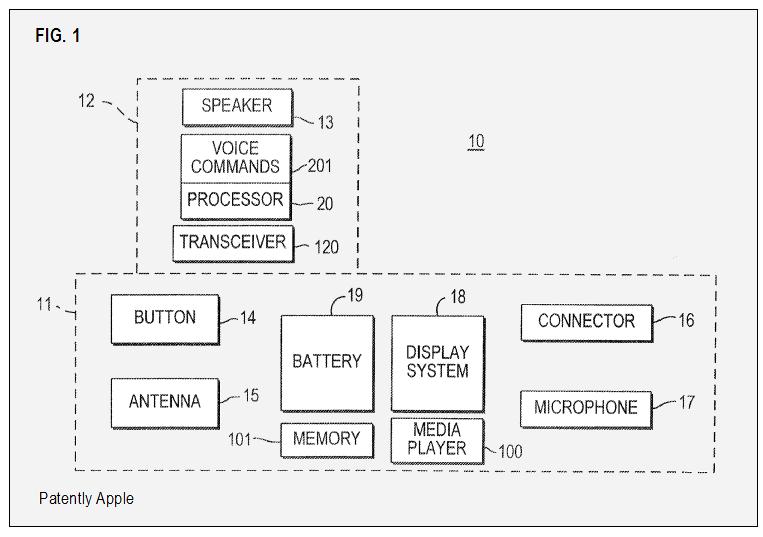