A belated US Patent via an Australian filing mysteriously surfaced this month revealing a stunning nano-phone concept in development at Apple. The design involves a very sophisticated yet complicated dual-surface user interface. The full face-side of this device will be nothing more than a display, much like the iPhone is today, while the back-side will be primarily dominated by a force-sensitive touch based surface. Your fingers, which act as a cursor, control the face-side UI by the back-side etched controls. The dramatic design will offer users a variety of interfaces or modes to work with including one for a phone, text messaging, a traditional iPod, a camera mode and more.  The design may also, according to Apple, simply offer consumers with a dual-sided display option in lieu of a force sensitive controller surface. On one hand, the design appears to be nothing shy of being revolutionary once again. On the other, the concept seems to be overly complicated. I'm sure that once we see it, it'll all make sense. Yet until that time it arrives, I think that Apple's design could be hotly debated.

In Apple's patent FIG.4 noted above, we see one of the key embodiments of this patent which incorporates mobile telephone capability. Device 400 displays numeric soft keys 405 on display screen 215 situated on front surface 210. The user may select or activate one or more of the displayed buttons by moving their finger(s) across back-side force-sensitive touch-surface 225 [shown below] so as to position cursor 410 above (i.e., spatially coincident with) the desired button. Selection may be made by applying pressure to the back side of the device.

Now that you've seen the engineering team's take on an iPod nano-style cell phone, we have to now backtrack to the beginning of this patent in order to understand how it works. In case you didn't quite catch it in the paragraph above, Apple's next generation nano-style iPod is going to provide us with a dual sided set of controls.   Before explaining the complexities behind Apple's new concept, it's best to first lay out the patent as it initially flows so as to lay out the fundamentals associated with the concept.

Cross-Sectional of an iPod Nano with Two Sided User Interface Apple's patent FIG. 2 shown above is that of a cross-sectional view of multi-media hand-held device 200 in accordance with one embodiment of the invention. It includes device housing 205, top surface 210 having display element 215 [an LCD] and bottom surface 220 having force-sensitive touch-surface 225. As used herein, a force-sensitive touch-surface is a surface that is adapted to simultaneously detect where one or more objects touch it (e.g., fingers) and the force those objects apply to the surface.

Referring to Apple's patent FIG. 3A noted below, we see a hand-held multi-media device 300 in accordance with one embodiment of the invention. It incorporates the functionality of click-wheel 305 on the device's force-sensitive touch-surface 225 (on bottom surface 220). Click-wheel 305 may be represented on touch-surface 225 by, for example, an etched or raised outline. 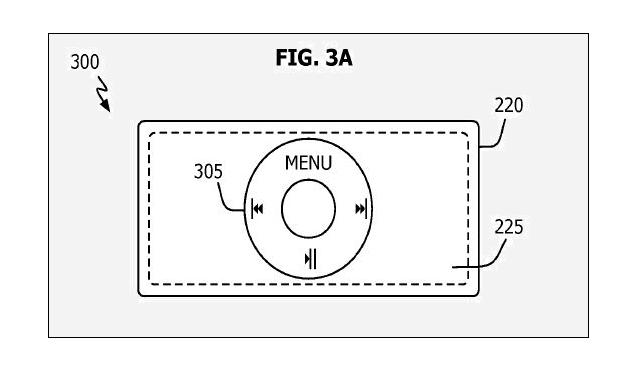 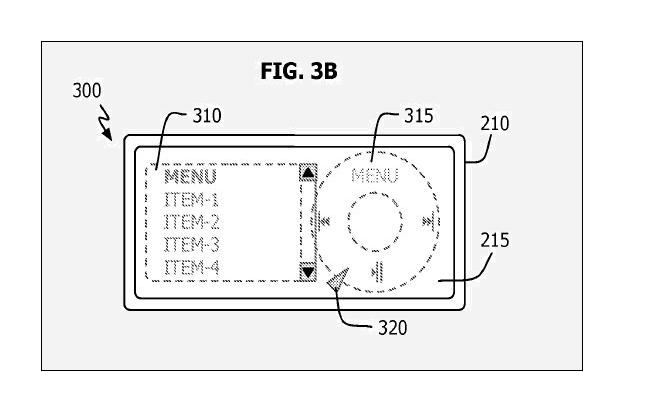 So with the traditional click-wheel on the reverse side of the iPod nano, shown above as centered in patent FIG. 3A, we see that the face of the iPod nano facing the user is an LCD display. In the illustrated embodiment, navigation menu 310 and click-wheel 315 are rendered transparently (denoted by dashed lines in FIG. 3B) so that the user may continue to view whatever information was being displayed at the time they activated the back-side control. The cursor, shown as arrow 320, is controlled by your finger on the backside of the device. You don't see your finger; you simply see your finger in the form of a cursor. So it's not a see-through double sided display design per se.

In another embodiment, a multi-media hand-held device such as device 300 may provide more than a single control element. In embodiments of this type, each control element (e.g., button, key, slider or click-wheel) may have an etched counterpart on back-side touch-surface 225, with each being displayed as desired (one at a time depending upon where the user's finger is detected, or all at once). Meaning that the backside/force-sensitive side could have both a traditional click-wheel on the extreme right bottom side and a numeric set of keys on the left.

Texting, e-Mail, IM and Other Modes 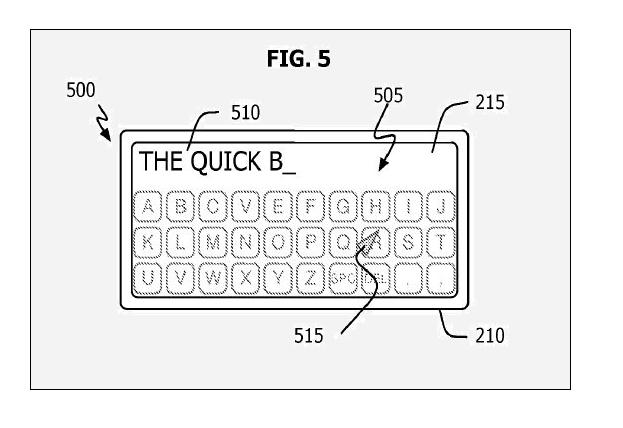 In Apple's patent FIG.5 noted above, we see device 500 displaying alpha soft keys 505 on the display element 215 (LCD) on the devices front surface 210. By selecting various keys, the user may enter character strings (e.g., string 510). As before, the user positions cursor 515 through movements of their fingers across the device's back-side force-sensitive touch-surface; button selection is made through the application of pressure to the back-side touch-surface. As shown, the device displays alpha buttons 505 transparently so that the user may continue to view information that may be displayed "beneath" them. Of course, the alpha buttons may be opaque.

The patent presents us with a wide array of modes that the new iPod nano or nano-styled device could be used in – such as phone mode, video play mode, audio play mode, calendar mode, email mode, address book mode and image capture mode.

Overview of the Touch-Surface Controller System 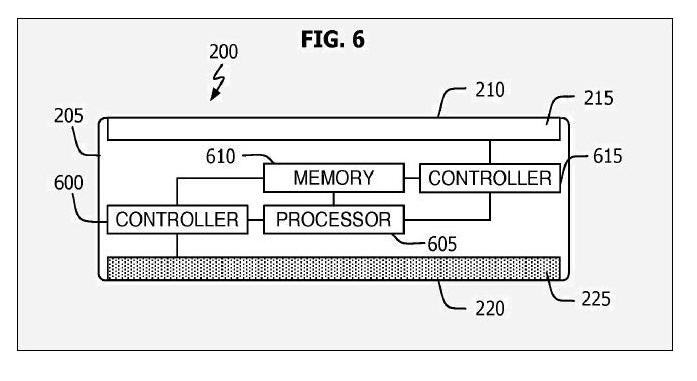 Apple's patent FIG. 6 is an illustrative implementation of hand-held multi-media device 200. The device is shown to include force-sensitive touch-surface controller 600, processor 605, memory 610 and display element controller 615. Controller 600 provides the necessary drive and sensing circuitry to obtain location and force information from force-sensitive touch-surface 225. In a typical implementation, touch-surface 225 is comprised of a number of sensing elements arranged in two-dimensional array. Each sensing element (aka "pixel") generates an output signal indicative of the electric field disturbance (for capacitance sensors), force (for pressure sensors) or optical coupling (for optical sensors) at the sensor element. The ensemble of pixel values at a given time represents a "proximity image." Touch-surface controller 600 provides this data to processor 605 or to memory 610. Processor 605, in turn, processes the proximity image information to correlate the user's finger movement across touch-surface 225 with the displayed information. Memory 610 may include one or more of the following types of storage media: magnetic disks; optical media; and semiconductor memory devices such as static and dynamic random access memory (RAM), Electrically Programmable Read-Only Memory ("EPROM"), Electrically Erasable Programmable Read-Only Memory ("EEPROM"), Programmable Gate Arrays and flash devices. Display controller 615 is responsible for producing the display element signals necessary to actually display information.

Unfortunately, Apple's patent leaves us in the dark as to whether the iPod nano-style device will be sold with differing preset etched controllers, a combination of etched controllers or whether the etched controls are simply inter-changeable. The tiny interface could likely accommodate two differing etched controllers per unit at any given time and no more. So it's a little baffling at how users will be able to use the nano design for texting, phoning and as a regular click-wheel based MP3 iPod based on using back-side based etched controls. The patent does hint at simply providing a dual display device - and that's likely the one that makes the most sense at the moment.

However, if back-sided etched controllers are to win the day, then the etch controller concept appears to be very confusing when it comes to texting or phoning. Are we basically being asked to get used to texting or using a phone pad from the backside up? -  Perhaps. On that basis, sight unseen, I have to admit that I just can't imagine that working efficiently. Then again, knowing Apple, I may just laugh at just how easy it really is with a little bit of practice. Time will tell on that one.

Apple credits John G. Elias as the sole inventor of this patent application.  It would appear, on the surface at least, that the reason that this patent application missed the US cycle initially as an Apple patent is because the patent was originally owned by Mr. Elias and likely not filed initially as an Apple patent. A secondary document reveals that Apple Computer Inc was named as "the new owner" at a later time. It should be noted that John G. Elias was part owner of the now defunct FingerWorks and is currently working at Apple on other sophisticated touch related patents.