Hidden within one of Apple's recent patent applications is a conceptual figure that Apple simply describes as an accessory device; a device that is clearly meant to enhance the value of an iPod – be it an iPod Classic or iPod touch. The contemplated accessory would add practical capabilities to the iPod, such as providing superior speakers and a built-in microphone that would work with Apple's new iPod touch/iPhone voice memo app - which is great for consumers, students and professionals. The iPod accessory could also introduce other interesting twists such as adding the ability to introduce external data to the iPod via SIM cards, flash drives and even hard drives. It could also include one or more connector ports such as a headset jack, USB ports and/or a 30-pin connector. Yet it's the possibility of adding both wireless capabilities and a SIM card to a media iPod that would strongly suggest that Apple may be thinking of ways of introducing entry level iPhone-like capabilities to their existing base of iPod owners. In these harder economic times, a SIM card option, especially a prepaid option, could certainly be what the doctor ordered. 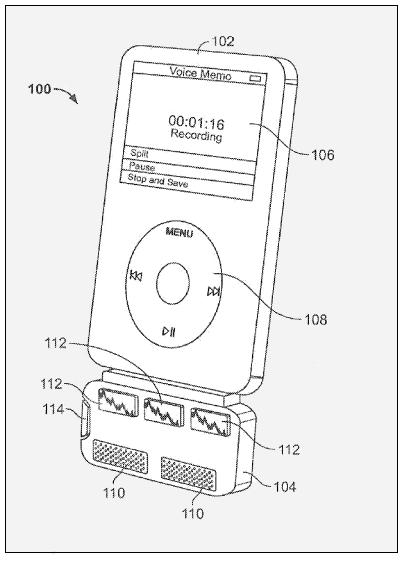