The attendees of this year's WWDC were abuzz over some of the new iPhone 3G-S features that Apple's Worldwide Product Marketing VP Phil Schiller introduced during his keynote. They were especially impressed with Apple's new 3 megapixel autofocus functions along with on-iPhone video editing and Voice Controls. Brian Tong reporting for CNET TV captured the excitement over these particular features this way:  "This will feature the touted 3 megapixel camera. It will be able to take photos a lot better. But it has this cool touch focus interface where you touch on an item  -  the camera and the software knows where to focus so they had house in the background and a flower in the foreground that they the used as example… Also you're going to be able to get video capture - everyone's been waiting for this. But the real slick-part about this is the fact that you can actually trim and edit your video clips and then upload them to YouTube, MobileMe or other services. Also some other features that were rumored - was voice control - so that you could actually talk by holding down the home button of your iPhone or iPod touch. It will actually enable you to "controool" your music collection or control it to call people. That was some really cool stuff" This WWDC 2009 Bonus report will show you that these cool features were borne from patents prior to the conference.

Weeks prior to Apple's developer conference a key patent report broke the news that Apple was Secretly Adding Voice Command Technology into Apple TV. The patent was credited to Apple's leading Spoken Language Group engineer Jerome R. Bellegarda. In an effort to stay under the radar of the public eye, Apple's name was omitted from the credits. But those of us in the know are well aware of Bellegarda's groundbreaking research and development in this field on behalf of Apple. Apple's release of this technology into their award winning iPhone last week - has, without a doubt, poked the air out of Microsoft's hot-air marketing balloon regarding voice control coming to Project Natal - sometime in 2010. 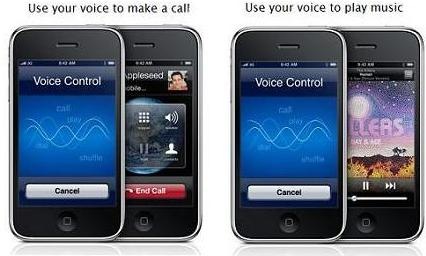 Additionally, a more detailed patent report titled "Apple Patent Reveals Voice Commands Coming to iPod, iPhone & Apple TV" covers voice commands eventually moving up into other iPhone functions regarding calendar meeting reminder notifications, incoming calls, voicemail, camera and yes, Apple TV. Apple is wise to focus and limit their introduction of voice command technology initially to iPhone-calling and iTunes music functions. It will allow iPhone 3G-S customers time to get familiar with these advanced functions while giving Apple engineers time to work out any of the preliminary foibles that might pop-up over the summer. Then they could begin to crank out a growing list of voice command functions as have been noted above.

Looking back to 2006, prior to Apple even unveiling their revolutionary mobile phone, one of our patent reports keenly pointed to a newly granted patent regarding voice commands and stated the following: "Being that the granted patent discusses the use of this system in relation to a user calling up a document, licence, memo and/or a producer’s agreement, it’s apparent that this patent could easily apply to a future iPhone." Reporting and forecasting patent technologies accurately, allows our readership the ability to enjoy the roll out of new products even more.  For patent sleuths wanting to review this particular patent in detail could do so by simply entering Apple's patent number 7,127,394 into this search engine.

The next coolest feature that is now available on the new iPhone 3G-S is their jaw dropping real-time video editor. This groundbreaking technology was first revealed to us in a 2008 Apple patent titled "Gestures for controlling, manipulating, and editing of media files using touch sensitive devices"

Right out of the gate in Apple's patent abstract, they stated that "Specifically, gestural inputs of a human hand over a touch/proximity sensitive device can be used to control, edit, and manipulate files, such as media files including without limitation graphical files, photo files and video files." Furthermore, in a report filed covering this patent, I pointed to a particular patent figure that covered Apple's editing capabilities on a camera and noted that "While this may indicate a future Apple camera, it’s likely that the concept is meant to work with the camera on the iPhone." Even Apple's still camera autofocusing feature is generically covered in this patent. I say generically because Apple's autofocus is a marketing trademark and therefore wouldn't be discussed. Instead, the raw terminology used in the patent describes all-manner of zooming functions. The reference to zoom can be found listed 48 times in this patent.  The zoom-in and zoom-out functions were covered in Phil Schiller's keynote with the example of the "House and Flower." A simple touch on the display on one of these objects would alter the view of the photo. It was a simple yet powerful visual. 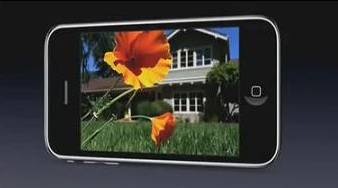 What's the Next Great Thing?

Just as we saw with the roll out of Apple's 2006 patents being the precursor to the great 2007 iPhone - or even last week's new iPhone 3G-S features being foretold in 2008 patents – Apple will continue to provide us with real insights, real facts and some really exciting concepts pointing us towards the next great thing. Every week Patently Apple is proud to present you with the very best patent news coverage to keep the excitement burning. And if the patent-pattern of the last two years is any indication – then we may be in store for Apple's response to the emerging "smartbook." Not because the rumor mill dreams of such – but because the facts bear that out. Stay tuned for a special report on this subject in the coming weeks – and stay connected year-round with our patent blog.

To Apple's engineering teams and their greater developer community at large: Thanks for the great show and may I extend a hearty - Cheers!