On June 4, 2009, the US Patent & Trademark Office published a patent application from Apple that reveals one of the next chapters for Apple's iPhone. Apple reveals that rich two way communications will be included in a future iteration of the iPhone that will allow users to finally transmit and/or share a selected tune, a video of your own or perhaps one from YouTube, a voicemail, podcast, photo and/or document to each other, all in real-time. Apple also clarifies that the iPhone will offer ichat (videoconferencing) and yet leaves the door open for other communication devices; perhaps a future iteration of Apple TV or future smartbook - or should I say iBook. That would be an interesting development, especially for enterprise users. Yet in another striking twist, this patent reveals that an iteration of an iPhone could provide enterprise users with the ability to use the iPhone as a mini projector. But it could likewise be a blast just between friends as you'll discover. 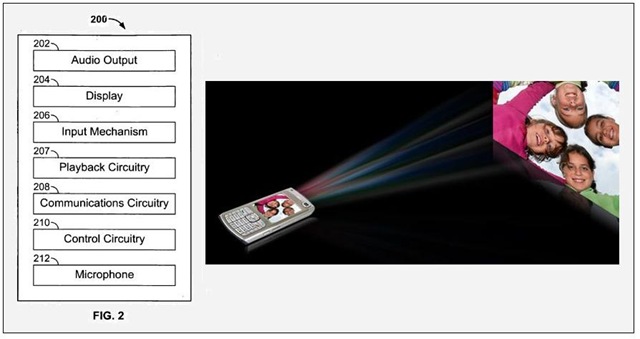 Buried in the finer details of the patent, Apple reveals indirectly that it will include a pico projector into a future iteration of the iPhone – or perhaps even the iPod touch. See the dual distinction that Apple makes for patent point 204 noted as display in figure 2 above. "For example, display 204 may include a screen (e.g., an LCD screen) that is incorporated in communications device 200. As another example, display 204 may include a movable display or a projecting system for providing a display of content on a surface remote from communications device 200 (e.g., a video projector).

You'll note that it is intimated (at the 1:50 mark of the video) that an embedded version of a pico projector could be designed for devices like the iPod. The company rep is holding an iPod when he makes that very point.

And here's a video showing teens having a blast watching music videos on their ceiling. The possibilities of this feature are endless for work and play.

Apple's futuristic two-way communication capabilities that were outlined for the iPhone in our introduction are given a face of operation in patent figures 4-7 below. Here, we begin to see the self-evident options available to us in button form. 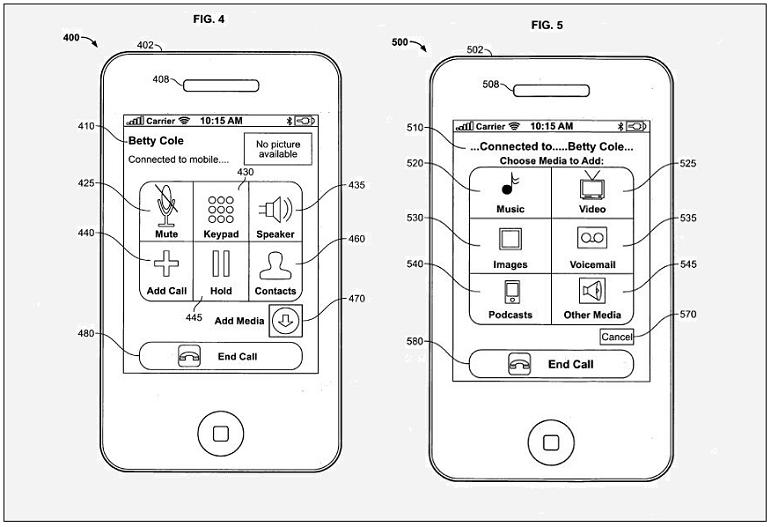 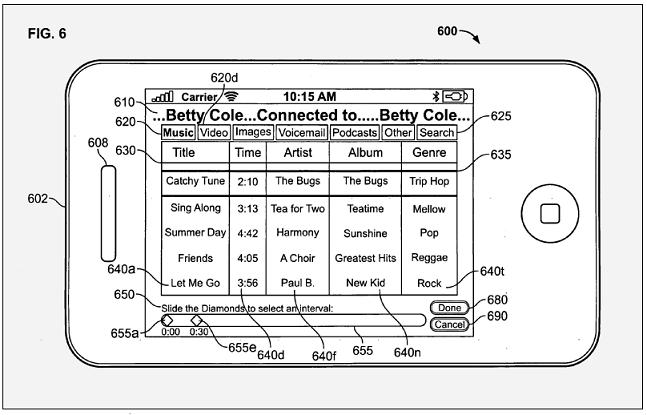 Apple's patent FIG. 6 is a schematic view of a display screen for viewing selectable media item options during your phone call.

In patent point 61 we learn of Mobile iChat or video conferencing: "A split-screen approach may also be employed by display screen 700 if the user is conducting a video-based communications operation, such as a video conference." Screen 700 is shown below, but there isn't an illustration showing us how the split screen would appear. And - you have to wonder if the camera is hidden beneath the surface of the iPhone because the camera is not presented on any patent figure. Sounds a little "out there," but you never know with Apple's great industrial design team. 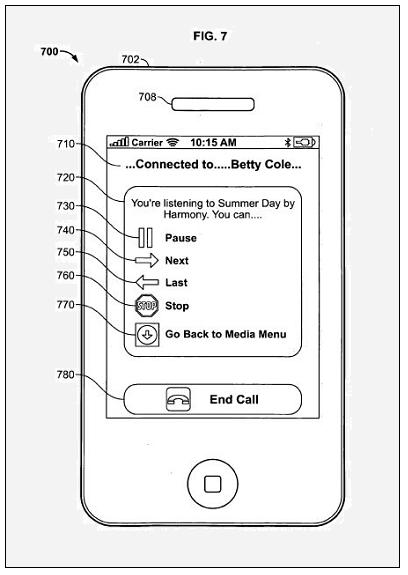 As a minor random point, it should be noted that Apple's patent point 28 qualifies some of the media involved with sharing as being QuickTime, MobileMusic.app, or MobileVideo.app. MobileMusic.app is associated with Shazam and available on BlackBerry, iPod/iPhone, Android and others. Apple also mentions BlackBerry in patent points 18 and 19 and in this minor statement:  It "may support protocols used by wireless and cellular phones and personal email devices (e.g., a Blackberry)." Yes, it's quasi generic patent talk but referred to enough to make you wonder if these two smartphone giants will collaborate with each other in minor ways. Anyways, it's worth noting.