As an interesting side note, the sole author of this Apple patent, Kevin Quennesson, left Apple in April of this year to join Cooliris, creators of the Cooliris 3D Wall. Cooliris is also available for the iPhone at the App Store. It makes you wonder how Apple ever let this creative engineer go and the direction that Cover Flow could have taken with him still on board. 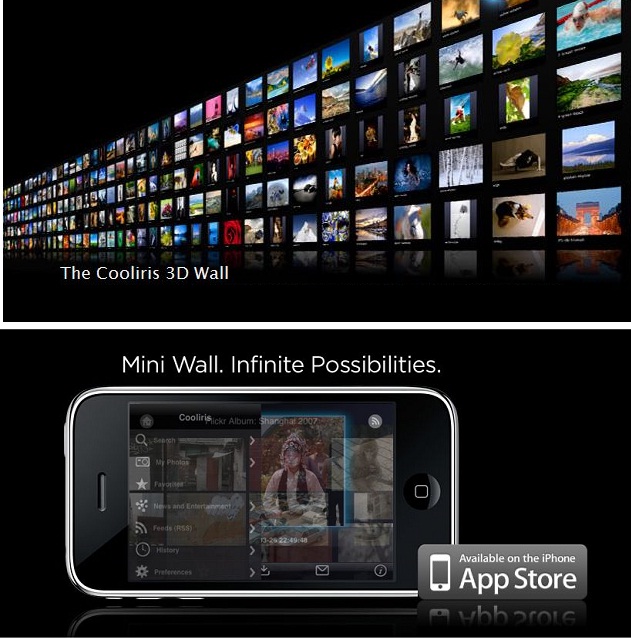 Apple's patent FIG. 3 (shown below) is a screen shot showing the three-dimensional content browser or editor with video frames displayed concurrently along a timeline of FIG. 1 with image analysis tools displayed along the timeline proximate to the video frames. The patent figure is included under the coverage of the software's "Image Analysis" feature. This must be a part of Final Cut Pro as it provides image analysis tools that aren't part of your every day simple iMovie tools - such as image histograms, image projections, image apertures, image profiles, image scattergrams, motion graphs (e.g., graphs that show the optical flow or amount of motion between frames), and image transforms (e.g., Hough Transforms and Fast Fourier Transforms).

Apple's patent FIG. 15 is a block diagram of an example software stack 1500. In some implementations, the software stack includes an operating system OS kernel 1510 (e.g., a UNIX kernel), a library system 1520, application frameworks 1530 and an applications layer 1540. 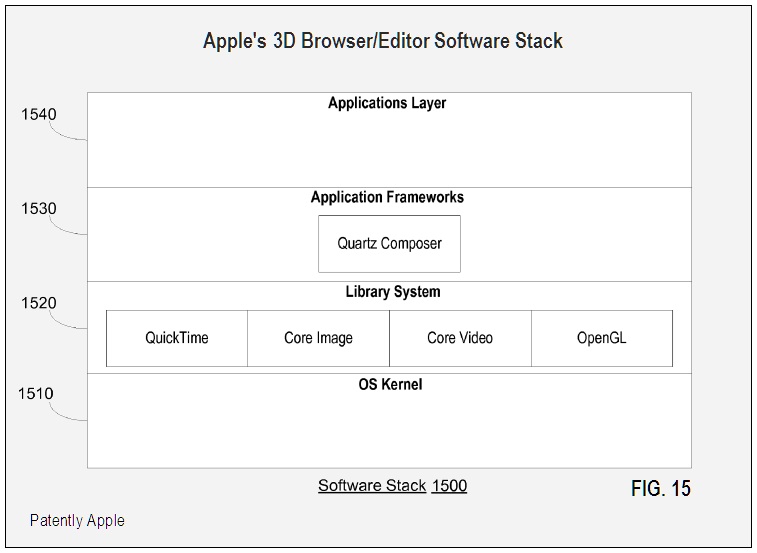 The library system 1520 provides various services applications running in the application layer. Such services can include audio services, video services, database services, image processing services, graphics services, etc. For example, the browser can make use of such services as QuickTime, Core Image, Core Video and OpenGL.

On Apple's website under Apple TV Movies, you'll find a video that shows you how Apple TV selects movies etc. On iTunes you could flip through movies for purchase or for rent using Apple's Cover Flow feature as shown below.

Update: With the introduction of Apple's new iTunes 9, the 3D Cover Flow style Browser has been dropped. Did Apple's 3D browser patent hit a wall?

Another Noteworthy Patent Applications Published Today: Another interesting set of Apple patent applications published today generally relate to Apple TV and more specifically the remote associated with it. This is really just a follow up to their more detailed patent 20090066648 titled GUI Applications for use with 3D Remote Controller published in March 2009. It was touted by some as Apple's Magic Wand Patent. If you use Apple TV, then there's not much to this patent for consumers. Apple's four published patents offer but a handful of refinements. On technical grounds however, the patents go into more detail about the technologies that make the remote controller function - such as Z-direction input mechanisms or motion sensors.

Yet in respect to the consumer refinements, the patent discusses such things as adding haptics to the remote; adding an on-screen virtual keyboard with predictive spelling; better zooming capabilities to get more details where applicable and an interactive screen saver which includes playing a series of photos from your iPhoto collection. The virtual keyboard for Apple TV is unlikely to be all that great but to Apple's credit they added the new Remote iApp. Using the iPod touch or iPhone's built-in keyboard capabilities for Apple TV will allow you to use its virtual keyboard and type in what you want a lot quicker than with a remote controller. See patents 20090158203, 20090153478, 20090153475, 20090158222 and 20090153389 for more details.