The US Patent and Trademark Office officially published a series of seven newly Issued Patents for Apple Inc. today, including two design wins. The notables within this group include a patent and design win for Apple's multi-button Might Mouse along with another design winfor their now defunct iPod Hi-Fi. Yet the most important granted patent published today is, without a doubt, Apple's powerful and secretive patent relating to integrated sensing display technology. This never released technology will one day introduce natural eye-to-eye video conferencing and eliminate the need for separate integrate cameras in computers and mobile devices like the iPhone.

Apple has been granted patents for their Mighty Mouse and its design. Apple introduced their first multi-button mouse to consumers in August 2005. 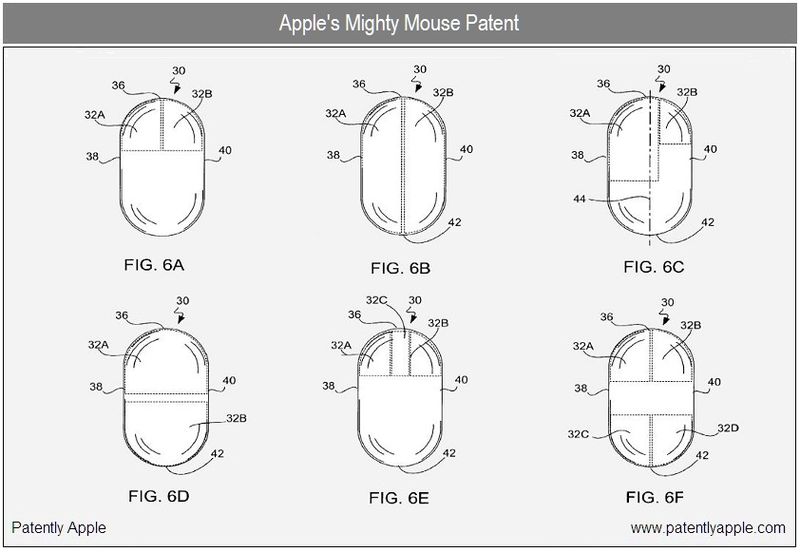 The Mighty Mouse is made of white plastic and has a recessed Apple logo on the mouse's face. The mouse has four functional "buttons": a left capacitive sensor, a right capacitive sensor, a clickable scroll ball and side squeeze sensors. The scroll ball enables users to scroll a page or document in every direction by rolling the ball in the desired direction. It should be noted that two of the above-mentioned inputs are not physical buttons. Rather, the touch-sensitive top-shell (mentioned below) allows the mouse to detect which side is being touched.

Apple's future use of integrated sensing display technology could apply to their iMac, MacBook, higher end iPods such as the iPod touch and/or iPhone and perhaps even a future Apple-HDTV. These units would have a camera built right into the very fabric of the display itself rather than sporting a traditional iSight camera. The technology would allow for a more natural form of video conferencing without consumers having to look at a particular physical camera. It would allow for a natural face to face experience. To date, Apple has yet to execute on this technology. Apple may have just been waiting for this patent to receive granted status before launching such a display. 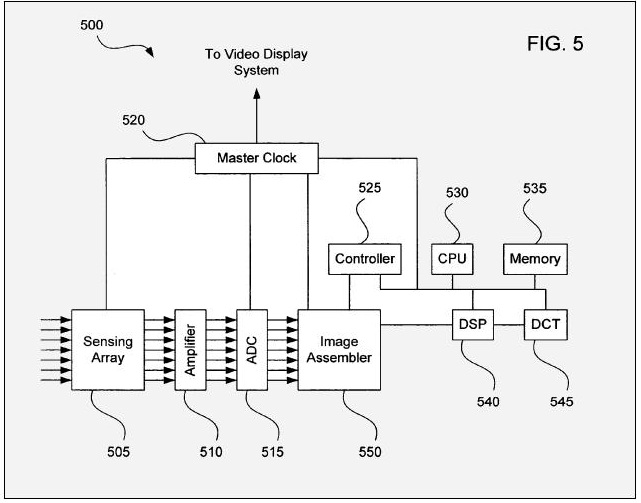 Apple's patent FIG. 5 is a schematic diagram of an exemplary system 500 that could use the present invention. The system includes an array of image elements 505 (sensing array), an amplifier 510, and analog-to-digital converter 515, a clock 520, a controller 525, a processor 530 (e.g., CPU), a memory 535, a digital signal processor (DSP) 540, and a discrete cosine transform (DCT) unit 545. Each component is an abstraction, and certain components may be combined or excluded as is well known in the art. The invention is suitable for use for capturing images. The images can pertain to still pictures or videos.

Apple credits Michael Uy (Santa Clara, CA) as the sole inventor of patent 7,535,468 which was originally filed in June 2004.

Notice: Patently Apple presents only a brief summary of patents with associated graphic(s) for journalistic news purposes as each such patent application and/or Issued Patent is revealed by the U.S. Patent & Trade Office. Readers are cautioned that the full text of any patent application and/or Issued Patent should be read in its entirety for further details. Apple's Design win for the now defunct iPod Hi-F defunct, can be found under D592,644. For additional information on any granted patent noted above, simply feed the individual patent number(s) into this search engine.