Apple Patent May Point to LED iMac's Later this Year 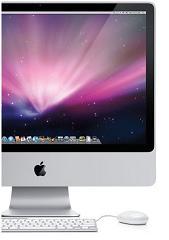 On May 28, 2009, the US Patent & Trademark Office published an Apple patent that generally relates to display systems, and more particularly to a desktop display system with a distributed LED backlight. Apple's iPod, MacBook, MacBook Pro, MacBook Air and Cinema Display currently use LED based displays which provide substantial improvements over LCDs in brightness, energy efficiency, color range, life expectancy, durability and robustness. Yet creating the 24" Cinema Display was no small task, as larger LED display configurations create area-to-perimeter ratio difficulties. Additionally, Apple had to work around conventional printed circuit board problems which had proven to have bad thermal properties for LED production. Apple's patent greatly details their integratinga plurality of tile LED light sources into a thermally and mechanically structurally integrated distributed LED tile matrix backlight light source. At the end of the patent, Apple states that their new distributed LED backlight system has provided for a straightforward, cost effective and uncomplicated process that is readily suited for efficiently and economically manufacturing large size display devices. That should translate into delivering an LED based display for at least Apple's higher end iMac – if not for their entire iMac line-up - for this coming holiday season in time to coincide with the debut of OS X Snow Leopard: Sweet.

Apple's FIG.1 above illustrates their Cinema Display. In patent FIG. 4 below, we see a larger isometric view of the backlight unit 220. The backlight unit 220 is formed of a series of tile bars 402 arranged adjacent and parallel to each other. Each tile bar is formed of a number of tiles 404 attached in a series on top of a tile bar rail 406. This is one the keys to this patent. 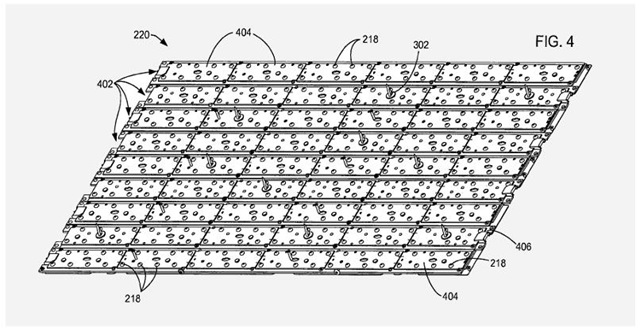 Apple's patent FIG. 25B below illustrates a fragmentary top view of a frame in which has been assembled in interlocked matrix form.

Apple's patent FIG. 25C illustrated above is that of a partially exploded, fragmentary, isometric view of a display utilizing a structure which has tiles that have been press-fit together to form a three-dimensional structural plate that is then incorporated into the frame of the display.

NOTICE:  Patently Apple presents only a brief summary of patents with associated graphic(s) for journalistic news purposes as each such patent application and/or grant is revealed by the U.S. Patent & Trade Office. Readers are cautioned that the full text of any patent applications and/or grants should be read in its entirety for further details. For more information on today’s patent application 20090135583, simply feed the patent number into this search engine.