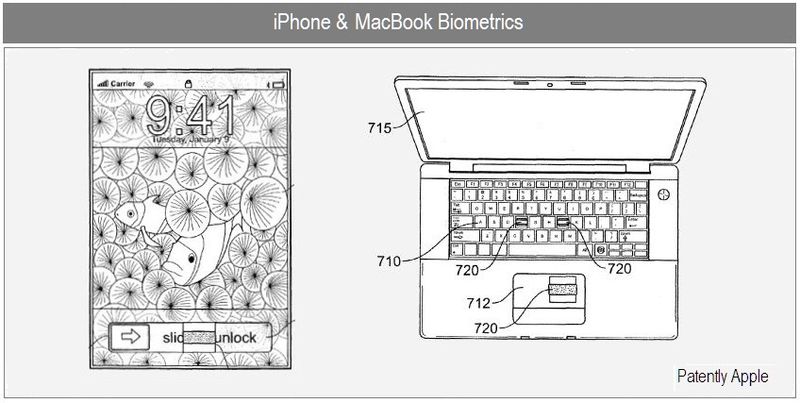 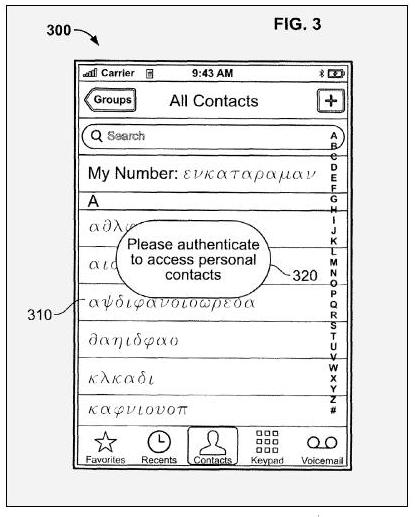 Apple's patent FIG. 3 illustrates the pop-up screen directing a user to authenticate. Prior to authentication the data on-screen may be blurred and unreadable until the user has been verified.  In some cases, the user may be able to access basic phone privileges like making a call without interference but not have access to email or your contact list without authentication. The good news here is that there appears to be a lot of flexibility built into Apple's authentication system so as to meet varied security levels the user requires or demands. 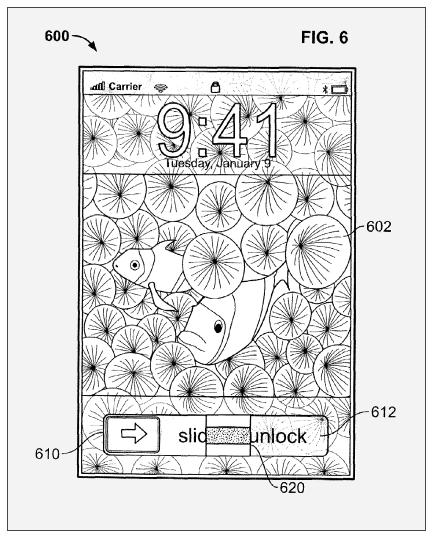 Apple's patent FIG. 6 shown above is a schematic view of an illustrative electronic device display for detecting a user's fingerprint in accordance with one embodiment of the invention. Display 600 may include screen 602 instructing the user to unlock the electronic device. The classic iPhone or iPod touch slider may in fact become the fingerprint scanner. In some embodiments, sensor 620 may be embedded in the electronic device such that it is not visible in display 600. For example, sensor 620 may be assembled, printed or etched directly on display 600 (e.g., etched on glass) such that the user cannot see the fingerprint scanner. If a user has difficulty providing a suitable fingerprint to sensor 620, display 600 may highlight the outlines of sensor 620 (e.g., display an icon directing the user to place a finger on the icon over sensor 620) to assist the user in authenticating.

Furthermore, the MacBook may include several distinct keys which may include a sensor (720) embedded in one or more keys. For example, an optical or capacitive sensor may be placed at the top surface of a key such that when a user places a finger on the key (e.g., rests his index fingers on the "F" or "J" keys), the sensor may detect features of the user's fingertips for authenticating the user. A two-dimensional or moving sensor may be used for this implementation to authenticate the user while the user's fingers are placed over the keys. 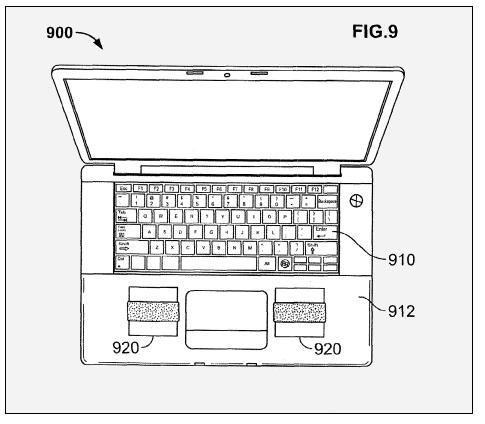 Sensors 920 may be operative to detect features of the user's skin when the user's hands are placed over housing 912, for example using a two-dimensional sensor. In some embodiments, the authentication system may instead or in addition include a sensing mechanism for detecting features underneath a user's skin. For example, the authentication system may include a sensor operative to detect the pattern of a user's veins, arteries, follicle distribution, or any other suitable feature underneath the user's skin that may be detected. 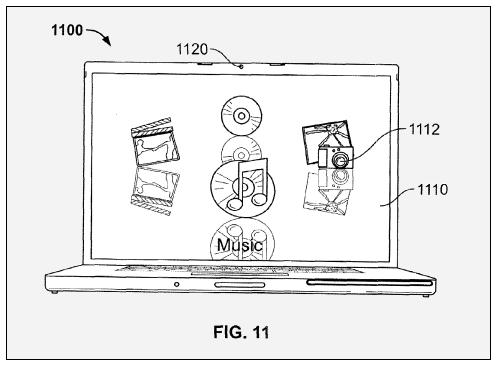 Apple's patent FIG. 11 is a schematic view of a MacBook having a sensor for detecting features of a user's face within iSight.  The MacBook could include sensor 1120 as indicated, so that the features of interest of the user's face may be aligned with the camera sensor 1120.

As another example, the sensor may instead or in addition be operative to detect movements of the user's eyes, for example by tracking the position and movement of a user's retina, iris, blood vessels, or any other feature of the user's eyes. Before providing a user with access to electronic device resources, the electronic device may direct the sensor to detect a predetermined eye movement set up by an authorized user. For example, each authorized user may create an eye movement track by moving his eyes in a particular manner (e.g., up, down, left, right, blink, blink) while looking at the sensor. When a user of the device moves his eyes in a manner that matches a predetermined eye movement, the electronic device may unlock the device or provide access to restricted resources. 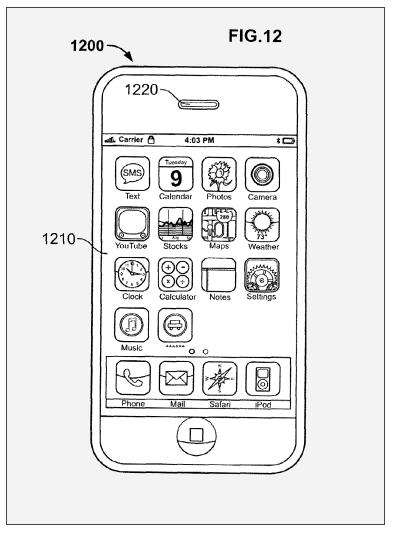 In Apple's patent FIG. 12 we see an iPhone schematic having a sensor for detecting features of a user's eyes in accordance with one embodiment of the invention. The iPhone or iPod touch could include sensor 1220 located adjacent to display 1210 such that the user's eyes may be aligned with sensor 1220 (e.g., in the field of view of sensor 1220) when the user faces display 1210 to view or access electronic device resources. Using sensor 1220, electronic device 1200 may detect features or movements of a user's eyes to authenticate the user and provide access to restricted device resources. In some embodiments, sensor 1220 may be implemented to authenticate a user based on features of the user's face (e.g., like sensor 1120, FIG. 11). 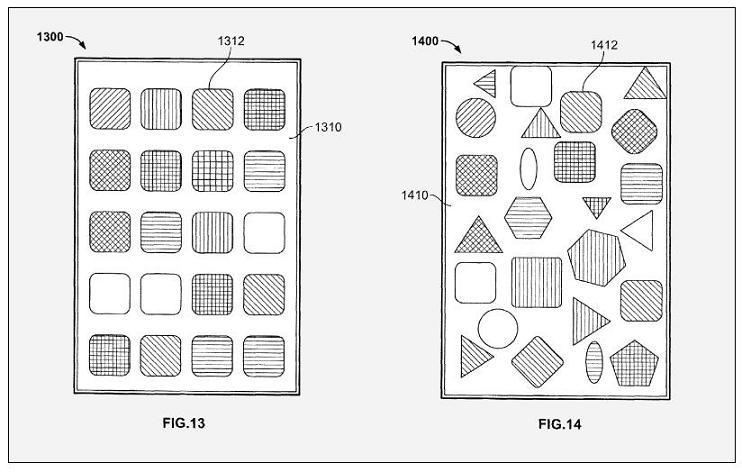 Apple's patent FIGS. 13 and 14 are schematic views of an illustrative display for providing a visual pattern.

As an extra security feature, Apple states that after each failed attempt at selecting shapes for authentication, the electronic device may change the distribution of the displayed shapes, or even change the shapes (e.g., use different colors or contours) to prevent an unauthorized user from guessing the proper subset of shapes. The electronic device may lock the device resources after a particular number of failed attempts to select the proper subset of shapes. Once locked, a user may need to couple the device with a host to re-enable the device (e.g., couple a mobile device to a fixed device) or use another authentication system (e.g., a biometric system) to re-enable the device.