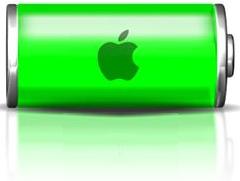 February 5, 2009, the US Patent & Trademark Office published a series of Apple patent applications involving a new advanced battery charging system. The new battery charging system will allow host machines, be it an iMac or MacBook, to both power consuming devices as well as power charging devices. Another aspect of the patent relates to the concept of a "universal battery" where a few "types" of batteries are adapted to be coupled with a large variety of electronic devices. For instance, there'll be a battery type for large mobile devices such as the MacBook, a medium size battery for the iPhone and iPod and yet a smaller battery for such things as wireless mice, watches, RFID devices, and small sport-type headphones. Apple's rechargeable battery system will also introduce a plurality of sensors to measure temperature and pressure of the battery core or to measure the current and voltage of the battery core in response to power flowing into or out of the battery core. Apple's new battery system will also uniquely alert end users when battery servicing or replacement is required. The system will direct users directly to either Apple's own iTunes Store or other participating retailer for convenience.