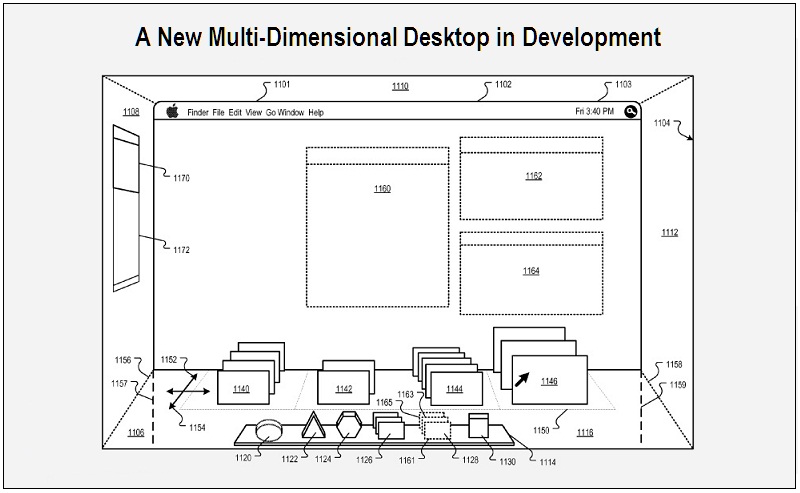 In November, the UPSTO Commissioner for Patents told the EE Times that his office was still falling behind and the backlog was growing. That understatement was clearly evidenced today when the UPSTO published between 65-70 Apple patents in a single day. While there were several technological themes that emerged within this allotment, such as back-up and programming, the number one theme of the day dealt with a new multi-dimensional GUI from Apple. "As the capabilities of processing devices progress" the patent reads, "so do the demands on the graphical user interface to convey information to the users in an intuitive manner." Apple defines multi-dimensional as an interface capable of displaying 2.5D or 3D imagery. Apple introduces us to the Newtonian physics model that could be utilized in this new GUI and presents us with several patent figures that illustrate coming features and/or effects. One of these cool effects includes the ability to wrap open windows around multiple surfaces. There are approximately 12 patents relating to this proposed GUI and this report simply presents you with a few highlights. 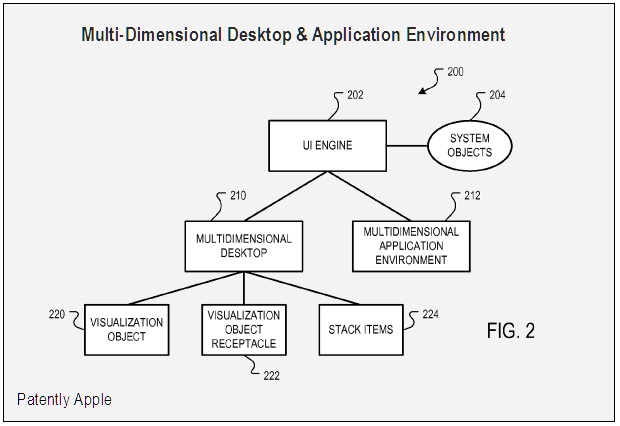 Apple's patent FIG. 5 shown below is that of a block diagram of an example user interface engine architecture (500). The UI engine can, for example, include an interaction and visualization model engine (502), a physics engine (504), and a context engine (506). Other engines can also be included. 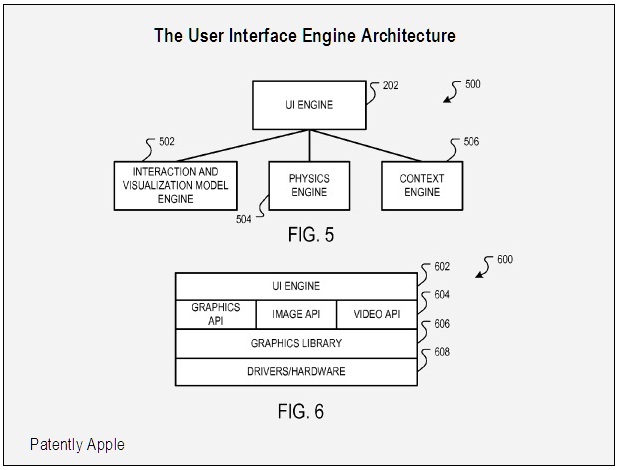 Apple's patent FIG. 6 noted above is a block diagram of example system layers (600) that can be utilized to implement the systems and methods described herein. Other system layer implementations, however, can also be used.

The following patent figures illustrating multi-dimensional environments are extremely detailed and can't be covered adequately an overview type of report such as this. Patently Apple strongly suggests that those who are interested in Apple's extreme detailing review the original patent (20080307360) verbiage and match it up with our illustrations below to assist your understanding.

Apple's patent FIG. 7, noted below, is a block diagram (700) of an example multidimensional desktop environment. In the example implementation, the multidimensional desktop environment includes a back surface (702) axially disposed, e.g., along the z-axis, from a viewing surface (704). In one implementation, the back surface can, for example, be a two-dimensional desktop environment, including one or more menus (701 and 703). In one implementation, the viewing surface can be defined by the entire image on a display device, e.g., a "front pane." One or more side surfaces, such as side surfaces (706, 708, 710 and 712), are extended from the back surface to the viewing surface. An icon (714) is generated on one or more of the side surfaces (706). Although only one visualization object receptacle is shown, addition icon receptacles can also be displayed, e.g., along the side surface (708). 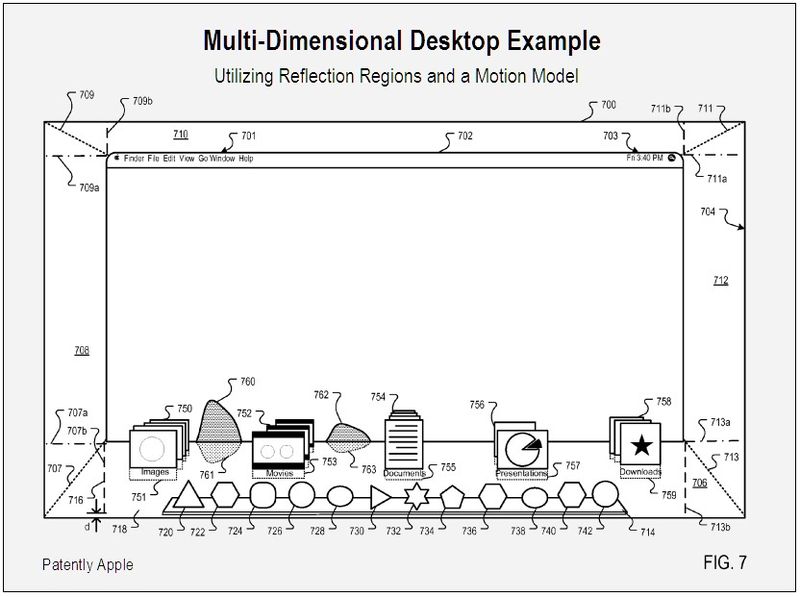 Apple's patent FIG. 11 shown below is a block diagram of another example multidimensional desktop environment which includes a back surface.  In another implementation, the lighting aspect can generate an illumination effect from the window thumbnail 1170 onto one or more surfaces. For example, the illumination effect can comprise a simulated sunbeam emanating from one window 1170 - with 1172 being a reflection or shadow of window 1170. In one implementation, the illumination effect can change according to local environmental states, e.g., the sunbeam can track across the surfaces according to a local time; the intensity of the sunbeam can be modulated according to the local time and local weather conditions that are received over the network 118, e.g., high intensity for sunny days, low intensity for overcast days and during the early evening, and/or being eliminated after a local sunset time and generated after a local sunrise time. 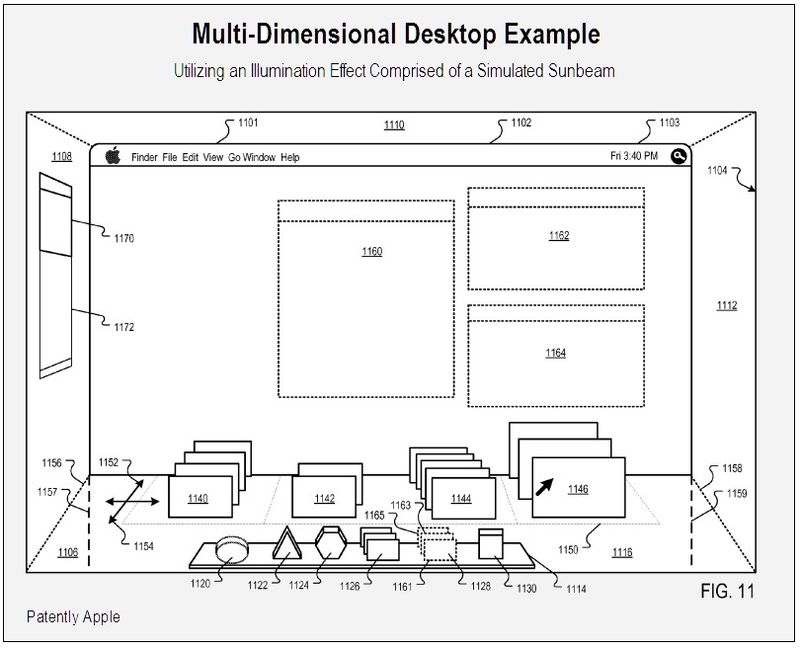 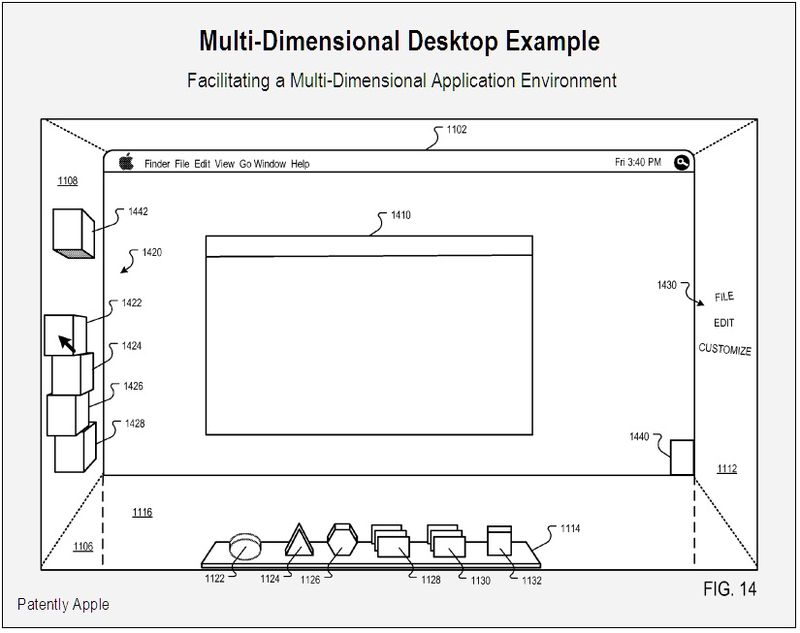 Windows Could be Dragged or Displaced on one or more Surfaces

Apple's patent FIG. 15 noted below is a block diagram of another example multidimensional desktop environment which illustrates how windows could be dragged or displaced across one or more surfaces. That could be a very cool feature. 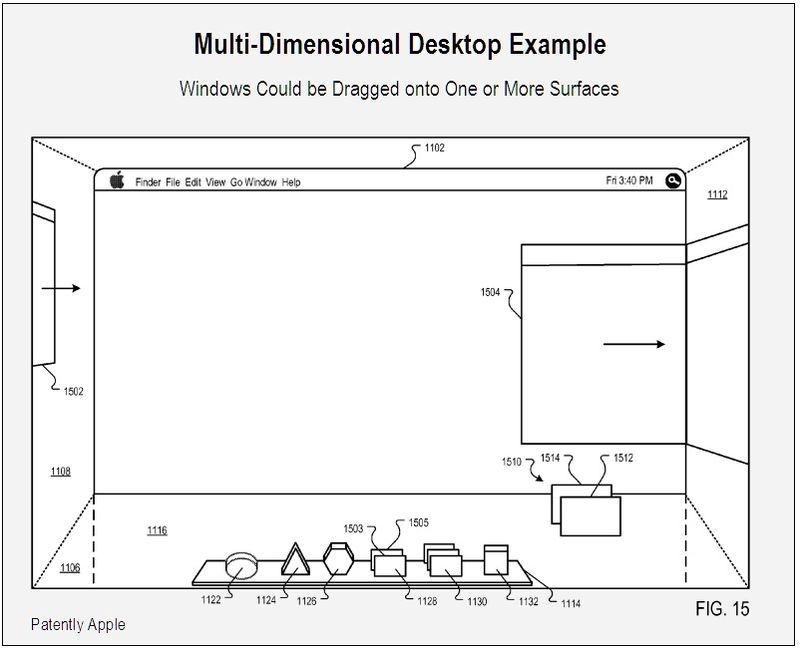 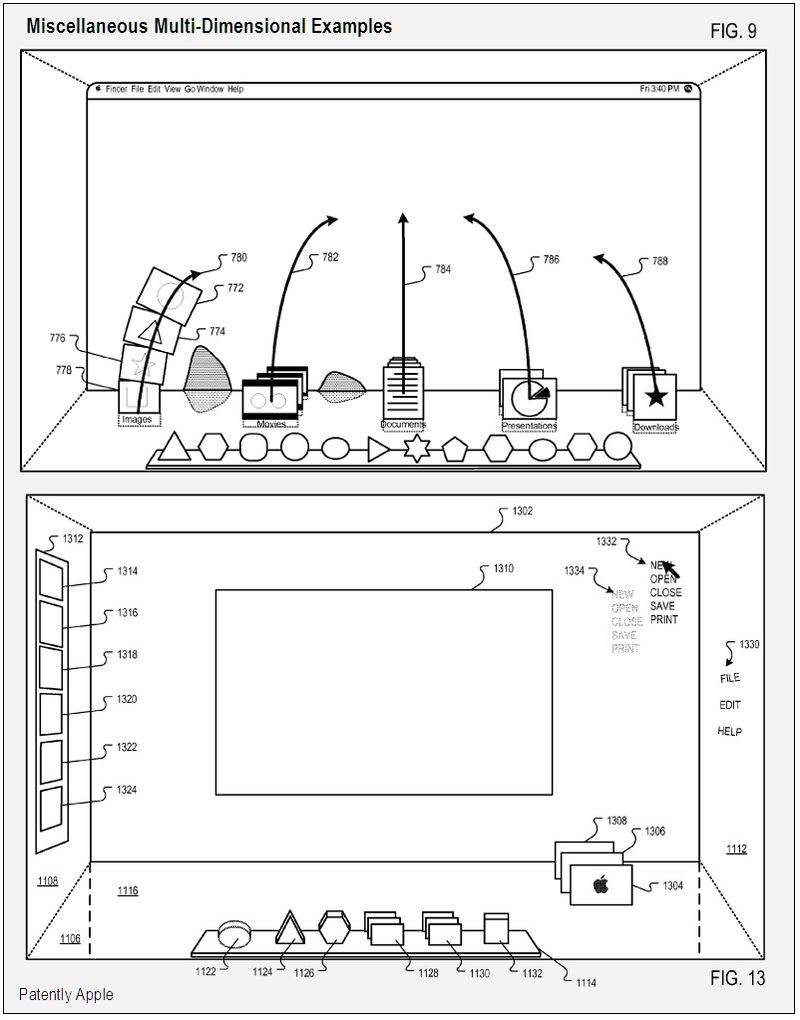 Apple's patent FIG. 16A shown below is a block diagram of another example multidimensional desktop environment which illustrates an arcuate back surface (1602 - curved like a bow) that is axially disposed, e.g., along the z-axis, from a viewing surface 1604. 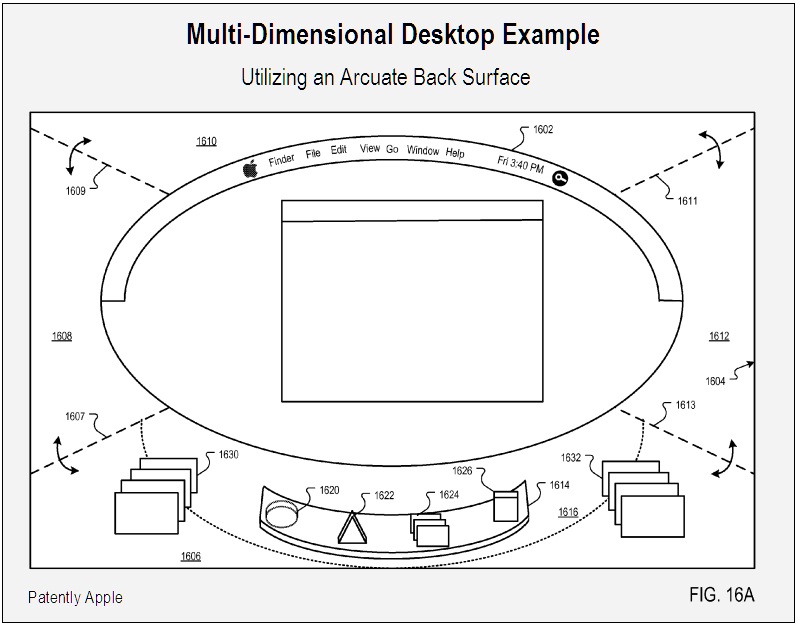 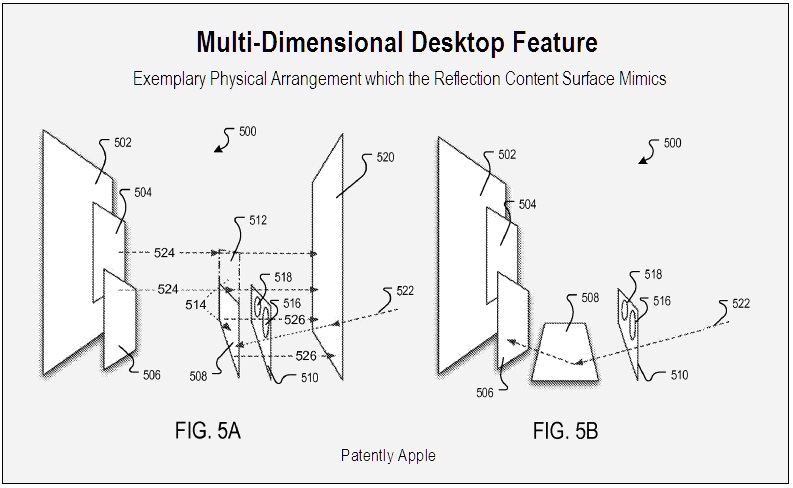 In a secondary related patent (20080307366), Apple presents us with patent FIG. 5B (as shown above) which illustrates a block diagram of an exemplary physical arrangement which the reflection content surface 508 mimics. In an implementation, the reflection content surface can appear to a viewer observing along viewing angle 522 as a mirror at right angle to the visualization objects 516 and 518, and containing a reflection of the visual content of the back surface 502 and the application interfaces 504 and 506. The reflection surface 508 is not limited to being placed at the bottom of a multidimensional desktop environment 500 (i.e., to reflect upward), and can be placed anywhere in the multidimensional desktop environment to reflect content in any orientation. In an implementation, scaling of the reflected content can be applied so as to simulate a curved reflecting surface.

Other important multi-dimensional related patents that were published today include the following: Multi-Dimensional Application Environment – 20080307351; Visualization and Interaction Models – 20080307334; Three Dimensional Viewer for Video - 20080307309 and one finally one that is titled 3D Movie Browser or Editor covered in this patent report.