On October 9, 2008, the US Patent & Trademark Office published an Apple patent application relating to voice activation technology that is being developed for the iPod, iPhone and Apple TV. The patent notes that the voice activation system could be robust and context sensitive. The voice activation can also be utilized without any preparatory user action with respect to the portable electronic device. The patent presents examples of voice commands relating to music, business meetings or calendar events, iPhone camera controls, various voicemail commands and more. 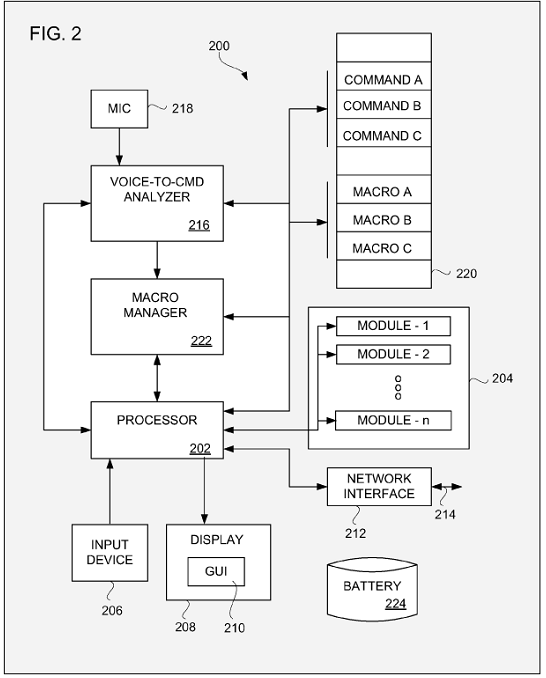 Apple's patent FIG. 2 is a block diagram of an iPhone which is presented here as device 200.  Device 200 isn't limited to being an iPhone however and could be an iPod, iPod touch, a portable gaming player, portable workout manager and the like, according to the patent.

As illustrated in FIG. 2, device 200 can also include data store 220. The data store could store a plurality of commands or macros as well as other data. These commands or macros are eligible to be executed by device 200 when requested by a voice input. Similarly, voice-to-command analyzer 216 can determine whether the voice input corresponds to a macro from a set of available macros stored in data store. The macros can be considered groups or sets of commands which are arranged in a particular sequence. A macro manager can couple to the voice-to-command analyzer so that when the voice input corresponds to a macro, the macro manager can manage the performance of the macro, which involves a plurality of commands operated in a particular sequence. 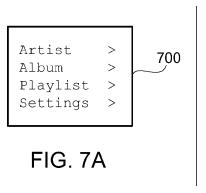 As still another example, the user could provide an audio input, namely, a voice command, by announcing one of the menu items of the menu 700 (or perhaps even a nested menu) which could affect a selection of such item. For example, the menu items could be categories, classifications, groupings, media items, device settings, device functions, and the like. The menu 700 can represent one menu of a series of nested or hierarchical menus, which can also be navigated or traversed by voice commands. 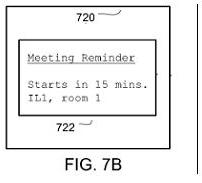 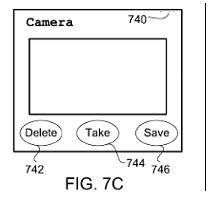 3 – Camera Controls: apple's patent FIG. 7C is an illustration of exemplary camera window 740 of a display device associated with an electronic device according to one embodiment of the invention. The camera window is displayed on the display device when the electronic device has been placed in a camera mode. While in the camera mode, the available commands can be specific to likely camera operations. For example, in the camera mode, likely camera operations include taking pictures, deleting pictures, saving pictures, etc. Available commands in the camera mode can also include macros. As an example, a macro can be triggered when an audio input is a command requesting that a current picture be taken. As an example, a macro can cause the picture to be taken, cause the picture to be saved in memory, and cause the picture to be uploaded. Although the electronic device is voice-activated, in some embodiments, the electronic device also supports the use of non-voice-activated techniques to provide user input. For example, camera window 740 can include soft buttons 742-746 for which the user can provide user input. Soft buttons 742-746 can be activated using a keypad. 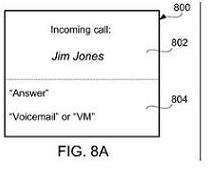 Incoming Call: Apple's patent FIG. 8A illustrated exemplary graphical user interface (GUI) 800 for an incoming call. GUI 800 is a representative display screen concerning an incoming call from a caller ("Jim Jones") as provided in upper portion 802 of GUI 800. Lower portion 804 of GUI 800 can display some or all of the available commands that can be spoken by a user to initiate the corresponding actions at the electronic device. As shown in FIG. 8A, the exemplary available commands with respect to the particular context of the GUI 800 can include "Answer" or "Voicemail" (or its abbreviated form "VM"). 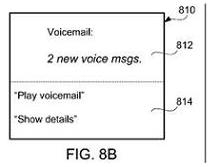 Voicemail Notification: Apple's patent FIG. 8B illustrates exemplary GUI 810 for a voicemail notification. GUI 810 is a representative display screen concerning voicemail available for a user of the electronic device. In upper portion 812 of GUI 810, the user can be informed that there are new voice messages awaiting their review. For example, as shown in FIG. 8B, the user is informed that there are two new voice messages. Lower portion 814 of GUI 810 can display some or all of the available commands that can be spoken by a user to initiate the corresponding actions at the electronic device. In FIG. 8B, the exemplary available commands illustrated in lower portion 814 can include "Play voicemail" and "Show details". 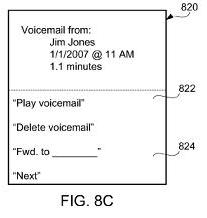 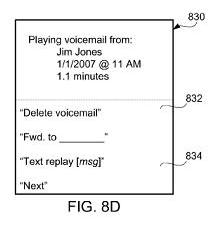 Voicemail Commands: Apple's patent FIG. 8D illustrates exemplary GUI 830 for playing of a voicemail. GUI 830 is a representative display screen for playing voicemail at the electronic device. In particular, lower portion 834 indicates that the available voice commands can include "Delete voicemail", "Forward to [contact]", "Text reply [Msg]". The text reply command can specify to send a reply text message to another person known to the electronic device or another device. For example, the spoken phrase could be "Text reply meet you at noon for lunch," which causes a text message "meet you at noon for lunch" to be sent to Jim, who is the sender of the message being replied to. 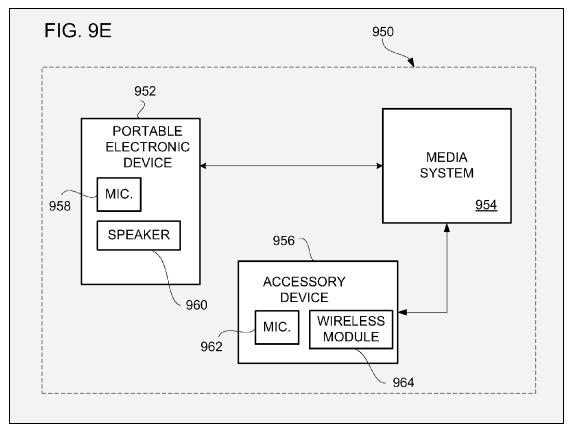 One of the inventors of today's patent 20080248797 is Dan Freeman, Manager of Audio Hardware Department at Apple Inc.

NOTICE:  Patently Apple presents only a brief summary of patents with associated graphic(s) for journalistic news purposes as each such patent application and/or grant is revealed by the U.S. Patent & Trade Office. Readers are cautioned that the full text of any patent application and/or grant should be read in its entirety for further details. For additional information on today's patent(s), simply feed the individual patent number(s) noted above into this search engine.