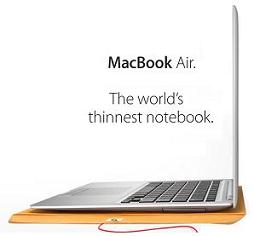 Less than Twenty-four hours after Steve Jobs introduced the world’s thinnest notebook, the European Trademark Office had officially published Apple’s trademark application 006577803 for 'MacBook Air.' The European filing was made by Field Fisher Waterhouse LLPs of London, England, and is listed as the priority filing. Apple has officially listed the trademark under International Classes 9, 16, 37 and 42 which are fully described below.  Apple’s January 15 US filing is noted as only covering International Class 9. Additionally, the USPTO lists Apple’s filing for Time Capsule on January 14, 2008 under the sole International Classification 9.

On January 3, the US Patent & Trademark Office published Apple's patent application titled "Integrated monitor and docking station." This timely patent presents us with a glimpse into a new iMac-like docking station that Apple has been working on since 2006. Two of the unique features presented in this patent include a telephonic handset and a liquid cooling system. With product launches at MacWorld 2008 likely to include notebooks, a notebook companion like this proposed docking station could be the surprise launch of the year.