Apple’s patent FIG. 1 is a simplified block diagram of an input device 10, in accordance with one embodiment of the present invention. The input device 10 may be a standalone peripheral device that connects to a host device through wired or wireless connections or it may be integrated into a host device (e.g., hard wired). In either case, the input device 10 is configured to provide inputs to the host device. Examples of host devices include any consumer related electronic device such as computers, PDAs, media players, telephones, etc.

In order to generate inputs as for example initiating commands, making selections or tracking, the input device 10 includes an object sensing mechanism 12 configured to detect one or more objects in close proximity to and/or in contact with an input surface 13. The object sensing mechanism 12 may be based on proximity sensing and/or touch sensing.

In the case of proximity sensing, the input surface 13 may be the surface directly underneath a proximity sensing field. The object sensing mechanism 12 generates input signals when an object such as a finger (or stylus) is moved above the input surface and within the sensing field (e.g., x and y plane), from an object holding a particular position above the surface and within the sensing field and/or by an object moving through or in and out of the sensing field (e.g., z direction). Proximity detection may be based on technologies including but not limited to capacitive, electric field, inductive, hall effect, reed, eddy current, magneto resistive, optical shadow, optical visual light, optical IR, optical color recognition, ultrasonic, acoustic emission, radar, heat, sonar, conductive or resistive and the like. 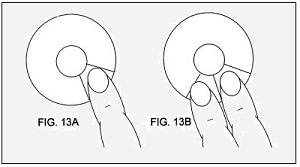 In one embodiment, the input surface is broken up into illumination regions, and whichever region is closest to the detected object is illuminated. By way of example, and referring to FIG. 13A, if the user places their finger over a single angular segment of the distribution panel that particular angular segment is illuminated. If the user simultaneously places their finger over multiple segments one of two things may occur. In one implementation, both segments are illuminated. In another implementation, only one of the segments is illuminated. In the later case, a decision may be made as to which segment is the intended segment. 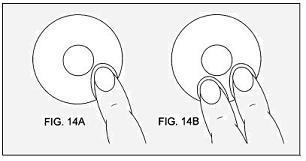 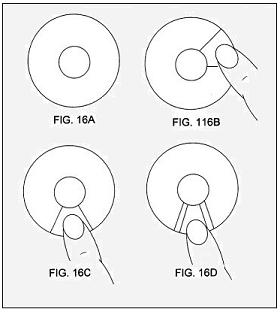