On August 2, 2007, the US Patent & Trademark Office published Apple's patent application titled Multi-touch Gesture Dictionary.  At first glance, Apple's patent could be taken as quite intimidating. I mean, who on earth really wants to learn an entirely new gesturing language just to be able to use your iPhone. Not many. However, for anyone who has ever learned the guitar, you know that it too looked insanely difficult at first. Yet with a little practice and some mean jamming with your friends, playing chords became second nature. Whether that proves to be the same for Apple's sophisticated gesturing language for the iPhone is another matter. I also know some mean playing numeric-pad accountants, and at the end of the day, I couldn't care less in learning that skill. Which way will the wind blow on this one? I don't know. Will it be viewed as cool to know the new Apple iPhone chord gesturing language or just a Mac cultists dream. Only time will tell on that one. For now however, Apple's patent is an interesting read.

Many attempts have been made over the years to improve the way users interact with computers. In the beginning, cards or tapes with punched holes were used for user input. Punch cards gave way to terminals with alphanumeric keyboards and text displays, which evolved into the modern keyboard, mouse, and graphical-display based graphical user interfaces. Many expect that the use of multi-finger, touch-sensitive user interfaces ("multi-touch interfaces", such as those described in the references incorporated above, will become widely adopted for interacting with computers and other electronic devices, allowing computer input to become even more straightforward and intuitive.

Users of these multi-touch interfaces may make use of hand and finger gestures to interact with their computers in ways that a conventional mouse and keyboard cannot easily achieve. A multi-touch gesture can be as simple as using one or two fingers to trace out a particular trajectory or pattern - or as intricate as using all the fingers of both hands in a complex sequence of movements reminiscent of American Sign Language. Each motion of hands and fingers, whether complex or not, conveys a specific meaning or action that is acted upon by the computer or electronic device at the behest of the user. The number of multi-touch gestures can be quite large - because of the wide range of possible motions by fingers and hands. It is conceivable that an entirely new gesture language might evolve that would allow users to convey complex meaning and commands to computers and electronic devices by moving their hands and fingers in particular patterns.

Although it is possible to learn and/or look up the meanings of gestures using a gesture dictionary formed around verbal descriptions, this may not be efficient for at least three reasons. First, the gesture itself may not be known to the user. Second, the meaning of the gesture may change as a function of the context in which it is performed. Third, the index of possible gestures may not be easily describable in words, thus making searching a verbal index cumbersome.

Furthermore, learning a multi-touch gesture language may be facilitated by having a gesture dictionary that provides some type of demonstration of the expected hand and finger motion. Similarly, remembering a previously learned gesture's meaning may also be benefited by having some way to easily access the meaning associated with the particular gesture.

Therefore, disclosed herein is a gesture dictionary that facilitates the learning and retention of the meanings or definitions of gestures that make up a multi-touch gesture language by providing demonstration of expected hand and finger motions. The gesture dictionary disclosed herein further allows looking up or accessing the meaning of gestures in a quick and easy manner that does not depend on verbal indexing.

Each of a user's hands can execute twenty-five or more chords. For example, five fingers that can be independently raised or lowered give rise to twenty-five combinations. Additional chords may be distinguished by whether only the fingertips are in contact with the surface or whether the length of the finger is flattened against the surface. Further chords may be distinguished based on whether the fingertips are placed on the surface close together or spread apart. 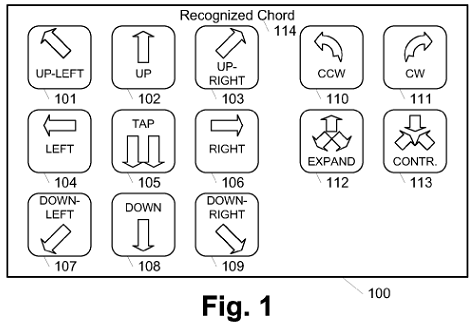 Many chords can have at least thirteen different motions associated with them. For example, a two-finger chord (for example, the index and middle fingers) could have specific meaning or action assigned to the lateral motions that include rotation, translation, and scaling. Rotation (clockwise and counter-clockwise) of the two-finger chord gives rise to two unique meanings or actions. Translation (left, right, up, down, and four diagonals) gives rise to at least eight unique meanings or actions. Scaling (contraction or expansion) also gives rise to two meanings or actions. The vertical motion of a chord may comprise lifting the fingers of the chord off the multi-touch surface almost immediately after they had touched down, (e.g., tapping the multi-touch surface with the chord) or multiple taps, etc.

With each hand able to execute twenty-five or more chords, and with each chord having thirteen or more motions associated therewith, there may be over three hundred possible gestures for each hand. Many more gestures are possible if both hands are used together. This gives rise to the gesture language referenced above. 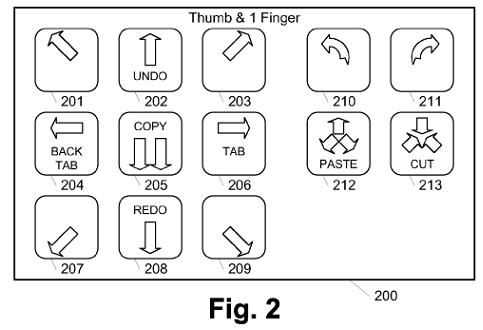 Apple's patent FIG. 3 illustrates exemplary dictionary entry 300 for commands that may be associated with gestures starting with a "thumb and two finger" chord. 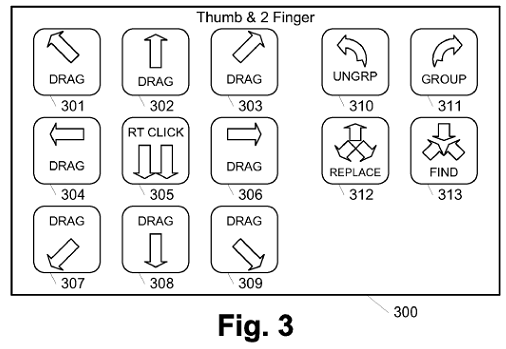 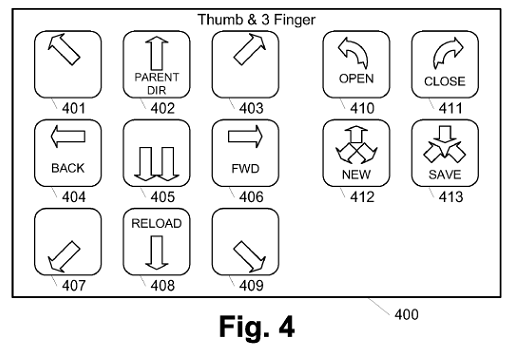 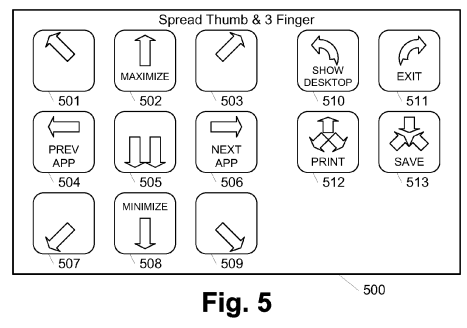 The time delay may prevent a gesture dictionary entry from being presented to the user every time a gesture is performed, which could be an annoyance or distraction. However, in some modes of operation this time delay could be omitted or substantially shortened. For example, it may be beneficial to a beginning multi-touch gesture user to have the dictionary entries displayed after every chord as a learning reinforcement mechanism.

The flow chart in FIG. 6 shows the steps of accessing the gesture dictionary from another application as described above. 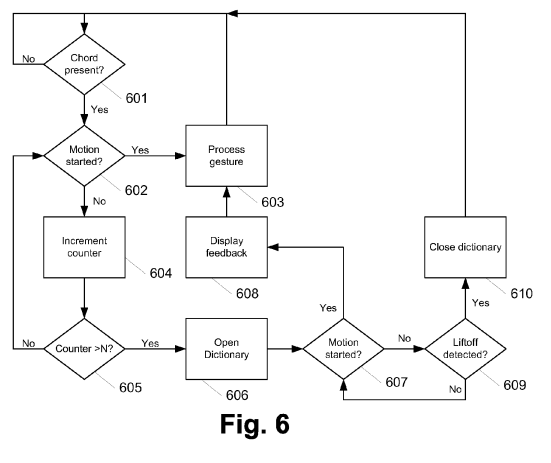 The multi-touch system may continuously monitor the multi-touch surface looking for the presence of a chord (601). When a chord is detected the system may monitor the positions of the fingers making up the chord looking for lateral or vertical motion on the surface (602). Each time the system checks for motion and there is none, a counter may be incremented before the system checks for motion again (604). If motion is detected before the counter reaches a predetermined value N then the combination of chord and motion (i.e., the gesture) may be processed and the current meaning or action associated with the gesture may be executed (603). If, however, motion is not detected by the time the counter reaches the value N (605), then the system may open the gesture dictionary to the entry corresponding to the chord being presented by the user (606). The counter thus implements the time delay function discussed above. 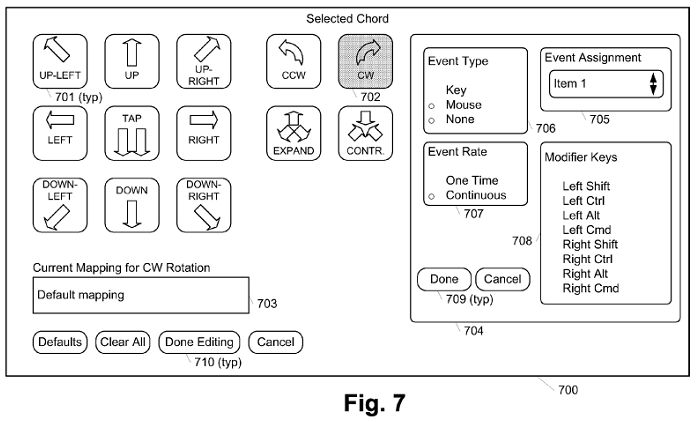 Apple's patent FIG. 7 illustrates an exemplary user interface display for a gesture dictionary application that may be used for assigning meanings to gestures. As in the examples discussed above, the display for a particular chord may include plurality of motion icons 701. Particular motion icon 702 corresponding to the gesture currently being edited may be highlighted or otherwise indicated in some way to provide indication to the user of the gesture currently being edited. Dialog box 703 may show, for example, whether the meaning associated with the particular motion (gesture) is the default or a custom mapping. A plurality of GUI buttons 710 may also be provided so that a user can indicate the assignment of a meaning to a gesture is completed ("Done"), cancel the assignment of a meaning to a gesture ("Cancel"), restore the default meanings, or clear all of the custom meanings. 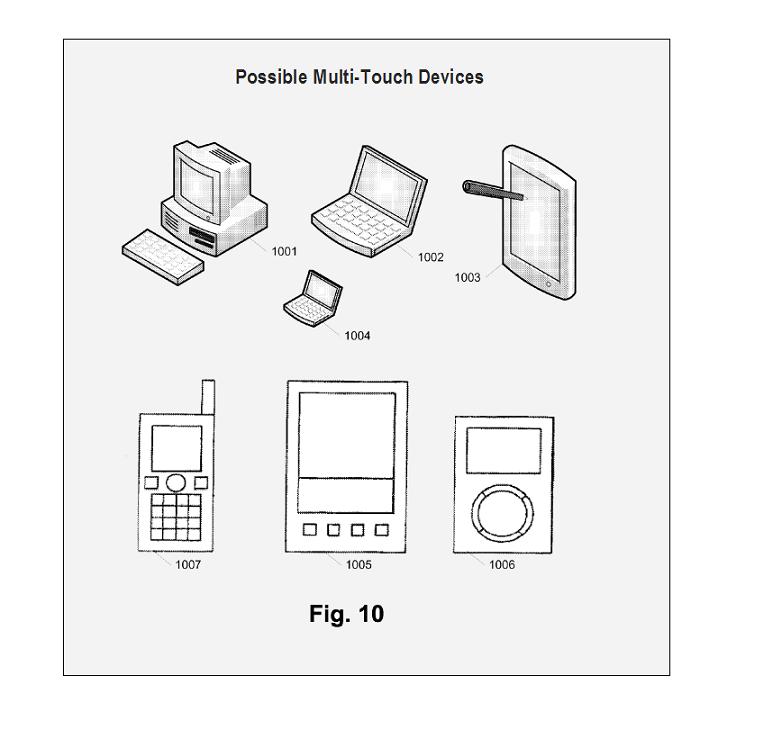 Update Note: The segment/paragraph titled "Possible Multi-Touch Devices" was added to this original report on August 22, 2009. The content in this segment under quotes is directly from the patent as identified in this report. The extra graphic with displayed devices could be found in Apple's patent.