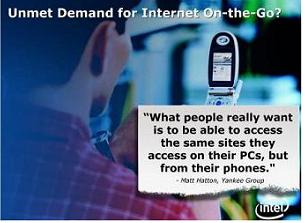 I could understand why the PC Press didn't bother to present news of Intel's visionary video titled I have seen the future, step into tomorrow ( which was shown during Intel's Spring IDF 2007 from eijing). You couldn't possibly watch it without seeing and thinking of Apple's iPhone, all the while. Although Tony Smith, reporting for the Register from the Beijing Conference didn't mention viewing Intel's video, he recently questioned in his report, "what chip is the iPhone based on? Apple hasn't said, but we'd put money on UMP." Obviously that's the kind of buzz and conclusion that most seeing this video walked away with, as you very well may, once you've seen it. Today's report will center in on that cool video while briefly reviewing Intel's UMP keynote. Yet at the end of the day, Apple mocks Intel's Golden Rule and Intel walks away the loser by playing imitator.

The Ultra Mobile Vision: In the Home

While Intel's vision may not have been meant to be iPhone specific, the fact is that much of what was presented in the video was more applicable to the iPhone today than anything that is coming from Apple's competitors. Not one of the devices that were presented on the IDF stage that were deemed to be using Intel's Ultra Mobile technology even came close to matching that which was presented in Intel's very own video.  That was simply a glaring fact.

Intel's video was broken down into three future scenarios. The first scenario, as illustrated above, involved a busy business executive who is seen calling up his email and contact list to be displayed on his home HDTV. As you could see for yourself, three of the four slides are shown to be displaying an iPod/iPhone-like device in the bottom right corner. Each are seen uniquely in sync with the television at all times, be it context with an application like email/iChat or TV programming. The mobile device is resident on the executive's coffee table directly in front of the television.

The Ultra Mobile Vision: In the Car

Intel's second video sequence covered a rental vehicle scenario. The video commences with another executive using his iPhone-like device in its vertical orientation to track his rented vehicle. The vehicle being sought is marked in red on the device screen, as seen below in the top left slide. In the middle left side slide, you'll see the mobile device's display screen representing the driver's preferred seating and steering wheel arrangements which are being communicated to the rented vehicles' dashboard computer. 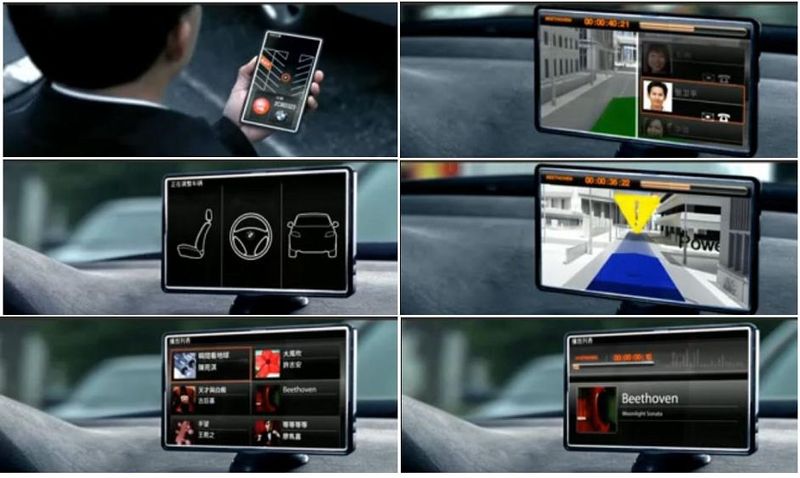 The video shifts to presenting the view of the car seat and steering wheel automatically moving into to the positions predetermined from the instructions resident in the mobile device. Both of the bottom slides represent an iTunes-like application. The driver used voice commands to call up his music application and then specifically requested a selection from his Beethoven collection.

Displayed in the middle right slide is a GPS mapping application activated via voice. The video goes on to demonstrate a series of steps pertaining to GPS capabilities including one which notifies the driver of a detour and an alternative route. The driver now running late for his meeting, calls up his contact list application and directs the device to place a call. The top right slide above illustrates a split screen wherein the GPS program keeps running while the contact list is being presented to the driver.

The last scenario in this series is primarily about an Ultra Mobile device being used as a phone. The top slides below denote a student wearing a smart-bracelet which is first seen in the video as being red/orange and then switching to green when an incoming message is detected. The center slides below illustrate the mobile-recipient using her phone's multi-touch display to see what kind of message has arrived. The mobile user returns her friend's text message which we see is being read by her friend at home. The message is about meeting up at a club later on.

You'll also note on the bottom slides that the user has both her home computer and her docking mobile phone in-sync with each other. After reading the returned text message, she picks up her smartphone, checks out her buddy list and makes a call to a third friend. Although a little rushed, the video does throw in a flash sequence of a video-chat session ending with a friend in her car and the friends going out clubbing as set up.

Anand Chandrasekher began his keynote talking about today's internet being primarily a wired experience. "When you take that and make it wireless, you unleash the same kind of innovation that cellular technology unleashed on phone lines. That's what we're talking about. To make this happen though, you need devices that could deliver that internet, deliver the richness, the content, everything people expect on the internet in a handheld device. I have something to tell you today that's a bit surprising and maybe a bit shocking: That's not a phone! A phone is predominantly used for phone calls. It is not designed for data oriented applications. And, you need a device that is a data oriented device that could deliver that full internet capability."

To make this point crystal clear to his audience, Chandrasekher ran the video titled I have seen the future, step into tomorrow. Afterwards, he continued with, in order "To make this happen, there's effectively three things that you need. Broadband wireless; wireless internet; and when I say wireless internet, I mean a wireless internet that is compatible in the wireless world, the handheld world…across the desktop and notebook world. One applications ecosystem; you write once and you could get that application delivered to you anywhere…that usage experience anywhere. And the third thing you need are devices that could effectively ride on those broadband networks…that could deliver that compatible capability across anytime, anywhere."

"So the technology elements exist. It's the integration of those to make it possible, that isn't there yet.  So making that wireless internet possible, taking everything that you could see on these devices (pointing to notebooks on stage) and putting it in your pocket, is immensely powerful." 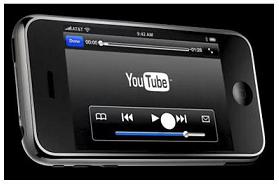 Anand Chandrasekher continues his keynote with emphais on Today's Internet Experience. "Today you can't do that. If you try to experience the internet today on the best possible 'pocketable' devices today, this is what you could get."  Anand Chandrasekher goes on to display various handsets that present a crude version of the internet and then makes it clear that you wouldn't be able to run a YouTube video on any of them and then questions aloud: "Why is that? The internet is a combination of a whole series of applications. There are billions of lines of code, billions. There are hundreds of millions of applications and plugs-ins. All of those are designed to run on Intel architecture today. It runs best on Intel's architecture today. So in a sense, you could think of the Intel architecture as a library card for all of those applications. Without that Library card, those applications don't run.

Well, Intel's Golden Rule concerning YouTube was true up until June 20 when Apple announced that "iPhone users would be able to enjoy YouTube’s originally-created content on their iPhones when they begin shipping on June 29. A new Apple-designed application on the iPhone will wirelessly stream YouTube’s content to the iPhone over Wi-Fi or EDGE networks and play it on iPhone’s stunning 3.5 inch display." The illustration above notes YouTube on Apple's iPhone.

So Sorry Intel, but you're Golden Rule concerning YouTube just got crushed – pulverized, dismantled - all in the blink of an eye. It's self evident that Apple isn't waiting around for Intel's 2008 Menlow chipset to deliver that internet-in-your-pocket experience; a marketing phrase that Steve Jobs first introduced at MacWorld, earlier this year. Nope, Apple will deliver that cool experience later on today, June 29, 2007. 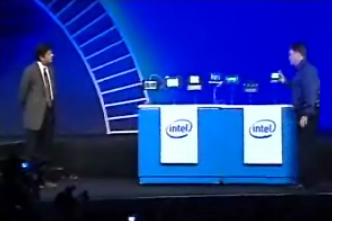 While Anand Chandrasekher's keynote was a fine presentation in general with several noteworthy points, the bottom line is that there was a glaring disconnect in respect to their futuristic video and that which was actually presented on stage. There simply wasn't a single Ultra Mobile Device on stage that even remotely matched the cool device in the associated Intel video.

Furthermore, there wasn't one device amongst the lot which even had the capabilities of a multi-touch concept, which was one of the central themes running throughout Intel's video. That spoke volumes. Intel's vision simply boiled down to copying Apple's iPhone which I found to be embarrassing for Intel.

The fact that Apple's iPhone will be the first true internet in your pocket device, made Intel's echoing of this phrase appear to be a desperate attempt on their part to match Apple's vision. It came off as badly as Perlmutter's WiMAX demo (from 33:08 – 35:00 –  no longer available as of Aug. 2009) which was to prove the wonders of WiMAX. Instead we all got to witness a colossal blunder.

Yet I appreciated Intel's video, only because it helped me visualize where the iPhone could actually be heading over the next 12-24 months. I mean just think about it for a moment. Apple is already on a roll with car rentals. Their Avis "Roll - Then Rock" iTunes campaign assures us that they're now aggressively working on that front at this very moment.  Apple also has patents covering a voice menu system and GPS capabilities  that were featured in the video. Heck, Intel's video was good enough to even incorporate that interactive cube on their imaginary phone. You know, like the one that Apple covered in a recent patent covering a unique interactive cube for mobile devices.

Yet the bottom line for most of us is quite simple. It really doesn't matter which chipset Apple has chosen for their iPhone, as long as it delivers what it promised. And although I'd love nothing more than to hear that Apple has chosen an Intel processor to power their iPhone line, I simply don't think that Intel's UMP is ready for prime time just yet. At the end of the day, it comes down to: may the best chip win. Yet for now, let's just hope that Intel has a good sense of humor, because that poke in their eye over YouTube now playing on the iPhone seemed to be awfully purposeful to say the least. Perhaps in hindsight, Steve Jobs presenting Intel's CEO Paul Otellini with a thank you plaque was a preemptive move after all. Only time will tell.

For now, here's a link to Intel's promo video "I have seen the future, step into tomorrow." And lastly, happy iPhone day to the lucky few that will get their hands on the world's truest Ultimate Mobile Device called the iPhone. Cheers!