On September 7, the US Patent & Trademark Office published Apple's patent application titled "Multi-functional hand-held device" originally filed in March 2006. In light of Apple's September 12th “Showtime” media event – this patent holds the potential of providing us with valuable insights into a new iPod and/or other hand-held device which could debut on Tuesday. Telephony is covered in this patent. However, the unique aspect of this chameleon style unit is that it holds the potential of changing UI. The patent notes: "Before a particular device functionality can be used, it typically must be selected for use. The selection can come in a variety of forms. For example, the selection may be made via a main menu that includes soft buttons or icons that, when selected, activate the device functionality associated with the soft button. During activation, the GUI for that particular device is brought into view on the display (see FIGS. 9-17 - below) and the software associated with the device is installed, loaded or activated. From that point on, the multi-functional device operates like the selected device.

Apple's Summary: Disclosed herein is a multi-functional hand-held device capable of configuring user inputs based on how the device is to be used. Preferable, the multi-functional hand-held device has at most only a few physical buttons, keys, or switches so that its display size can be substantially increased. In other words, by eliminating physical buttons, keys, or switches from a front surface of an electronic device, additional surface area becomes available for a larger display. Ultimately this strategy would allow a substantially full screen display. As used herein, a full screen display is a display that consumes, or at least dominates, a surface (e.g., front surface) of an electronic device. Various embodiments of a multi-functional hand-held device are discussed below with reference to FIGS. 2-28. 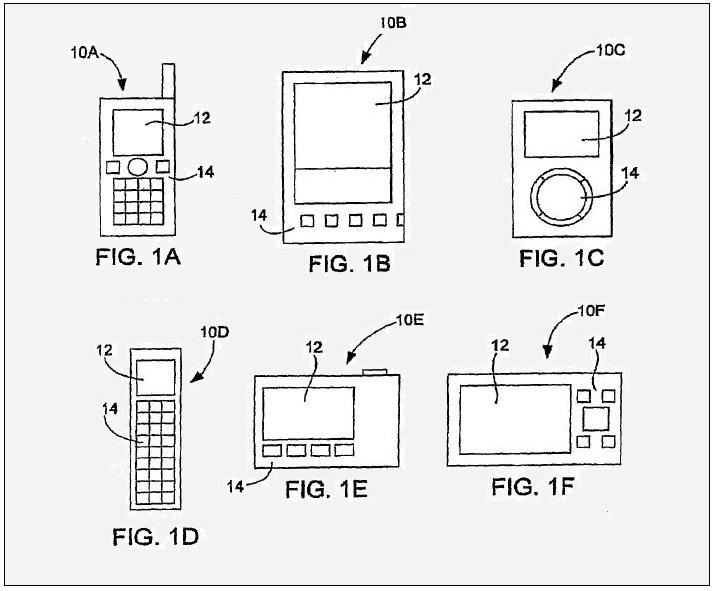 Electronic device manufacturers have discovered the advantages of combining separate hand-held electronic devices to form multi-function devices. By having a single multi-function device, a user is not burdened with carrying, purchasing, and maintaining multiple devices. Further, the user is not limited in the operations that can be performed, i.e., the user can perform different operations with a single device that would have otherwise required the use of a different devices. Apple's patent Figures 1A to 1F illustrate various electronic devices.

As used herein, the term "multi-functional" is used to define a device that has the capabilities of two or more traditional devices in a single device. The multi-functional device may, for example, include two or more of the following device functionalities: PDA, cell phone, music player, video player, game player, digital camera, handtop, Internet terminal [and/or] GPS or remote control. For each new device functionality that is added to a single device, the complexity and size of the device tends to increase. Therefore, with hand-held devices, there is typically a trade-off between beeping the footprint small and complexity low while still maximizing the functionality of the device.

In some cases, combing devices may result in redundant hardware components, which allows components to be used for multiple different, device functionalities. In other cases, certain hardware components are distinct to each device and therefore additional space and connectivity must be made available. Furthermore, each device functionality typically has its own programming or application software and, therefore, the multifunction device must be designed with enough memory to accommodate all the various software components.

A personal digital assistant (PDA) is a mobile hand-held device that provides computing and information storage and retrieval capabilities for personal and/or business use. PDAs are severally capable of tracking names, addresses, phone numbers and appointments. They are also often capable of taking notes, performing calculations, paging, data messaging, and electronic mail. PDAs may also include functionality for playing simple games, music, and other media files. Examples of PDAs include the Palm Pilot and Blackberry.

Like most hand-held devices, PDAs typically include a display and various input devices. The input devices may include a stylus and touch screen that work in combination with a handwriting recognition program, keypads, mini-keyboards, navigation pads, and/or soft or fixed function buttons.

Media players come in a variety of forms. Music players are generally configured to store, process and output music. Music players can be based on the MP3 or AAC format, which is a compression system for music. Music Players typically include a microprocessor, memory, display, audio jack, data port and playback controls. The playback controls typically include features such as menu, play/pause, next, previous, volume up, and volume down. Video players are similar to music players in most respects. In some cases, they may include a data storage device for receiving a removable storage medium such as a DVD. The iPod media player manufactured by Apple Computer, Inc. of Cupertino, Calif. is one example of a media player.

Handtops are general purpose computers similar to laptops, but in a smaller form factor. Handtops typically include a display and a full keyboard. 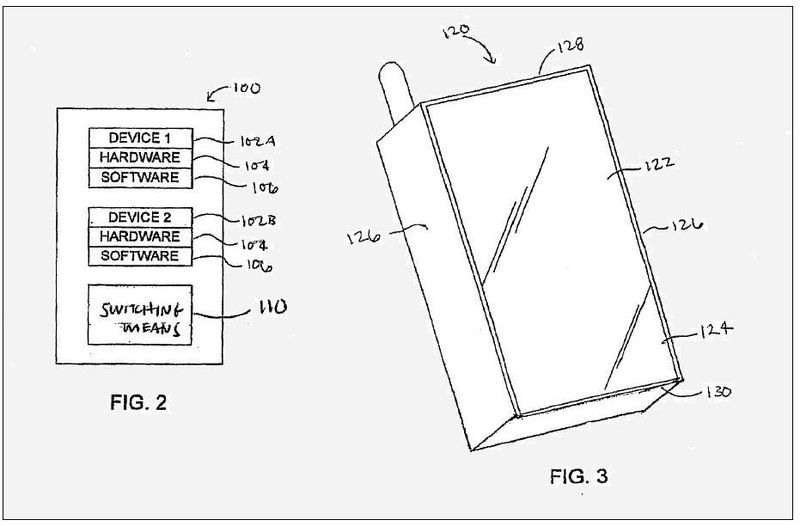 However, the operating modes of multi-functional hand-held device 100 need not completely independent. In many cases, it will be desirable to allow the multiple functionalities to interact with each other. For Example, a user may look up a telephone number of a contact in the PDA and pass this number to the phone to be dialed.

Patent FIG. 3 is a perspective view of a substantially full screen multi-functional hand-held device 120 with a limited number of buttons. There are no physical buttons on the front and side surfaces 124 and 126. The front surface is used entirely for the display 122. Further, because the sides 126 are used for grasping the device 120 it may be preferred to leave the sides free from buttons to prevent accidental actions in the event a user inadvertently presses a button while supporting the device. Although the top surface 128 and bottom surface 13 O would not typically be used to hold the device, these surfaces are not ideal locations for buttons that are often actuated because it would be awkward to reach these buttons when operating the device with one hand.

The top surface 128 may be reserved for buttons that have limited action and generic functions that are cross-functional, for example, power and hold switches. The top and bottom surfaces 128 and 130 are also well suited for placement of I/O and communication ports. The top surface 128 may, for example, include a headset/microphone jack and an antenna, and the bottom surface 130 may include power and data ports.

As shown in FIG. 4, the hand-held device 120 includes a button 140 in the upper region on the side surface 126 of the hand-held device 120. Because the button 140 is in the upper region, it tends to be out of the way of the grasping hand and therefore accidental activation is substantially eliminated. The upper button may be configured to switch the functionality of the multi-functional device i.e., button 140 may be switch 110 of FIG. 2. For example, by pressing the button 140, a new device functionality is activated, and the current device functionality is deactivated. Although the term button is used, it should be appreciated that the button 140 may correspond to a dial, wheel, switch and/or the like (click to enlarge). 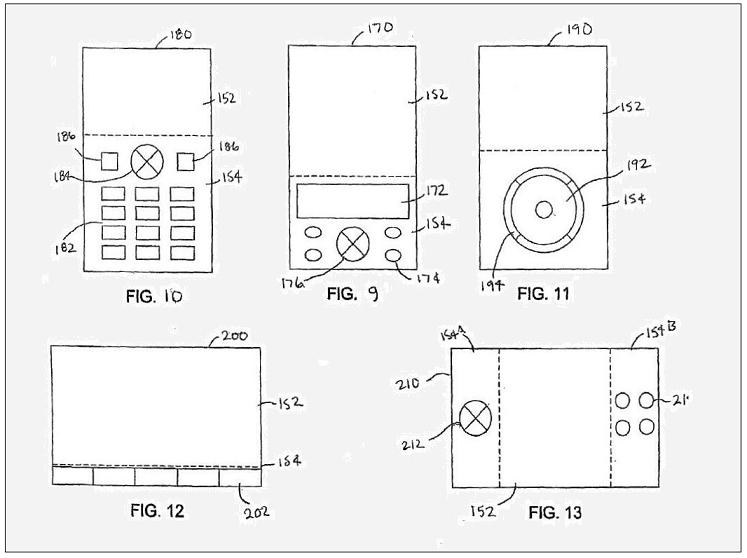 FIG. 11 is a diagram of a GUI 190 that is used in a music player mode. As shown, the GUI 190 is divided into a standard region 152 and a control region 154. Located inside the control region 154 are a virtual scroll wheel 192 and five virtual buttons 194. Additional details on a virtual scroll wheel are provided in U.S. patent application Ser. No. 11/038,590, titled "Mode-Based Graphical User Interfaces for Touch Sensitive Input Devices," filed on Jan. 18, 2005.

FIG. 12 is a diagram of a GUI 200 that is used in a video player mode. As shown, the GUI 200 is divided into a standard region 152 and a control region 154. Located inside the control region 154 are a plurality of virtual buttons 202. Alternatively, the controls may appear and disappear as needed since the video player is primarily used in conjunction with a full screen viewing mode. 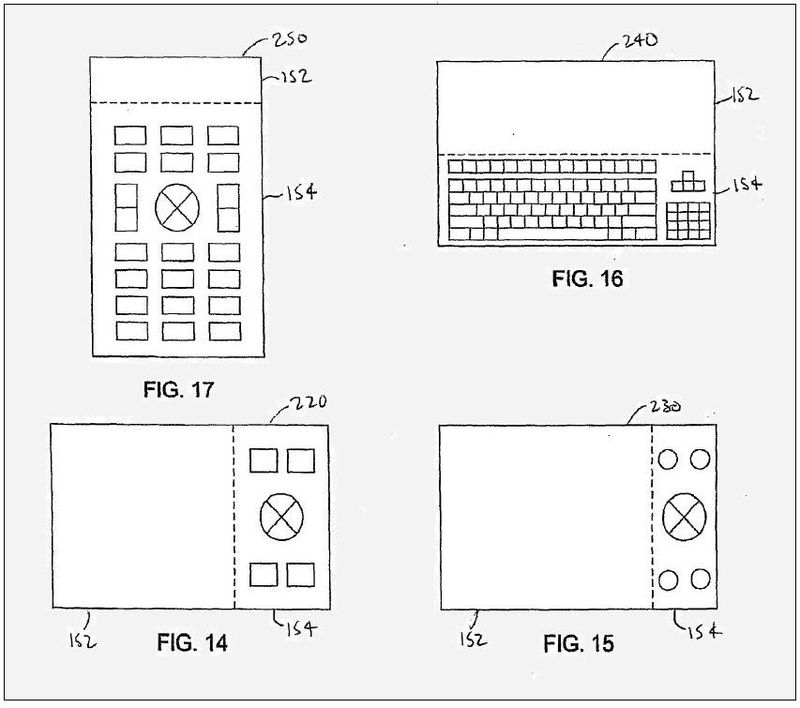 FIG. 14 is a diagram of a GUI 220 that is used in a camera mode. As shown, the GUI 220 is divided into a standard region 152 and a control region 154. The standard region 152 may represent the view finder. Located inside the control region 154 are various buttons 222 including for example picture click, zoom, flash, etc. A navigation pad 224 may also be included so that the pictures can be scrolled through or for menu navigation.

FIG. 15 is a diagram of a GUI 230 that is used in a GPS receiver mode. As shown, the GUI 230 is divided into a standard region 152 and a control region 154. Located inside the control region 154 are various buttons 222 including for example zoom, pan, etc. A navigation pad 224 may also be included.

FIG. 17 is a diagram of a GUI 250 that is used in a remote control mode. As shown, the GUI 250 is divided into a standard region 152 and a control region 154. Located inside the control region 154 are various keys and buttons 252 associated with controlling a remote device such as a TV, DVD player, A/V amplifier, VHS, CD player, etc. 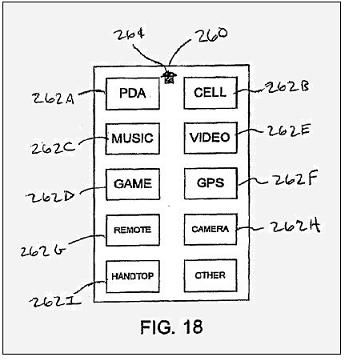 The selection of alternative functionalities may also be accomplished by flipping (or scrolling) through the various GUIs until the desired GUI is found. For example, the different GUIs may be incrementally brought into view page after page (or frame after frame) when a next (flip) command signal is generated (e.g., slide show effect). The transition between pages may be widely varied. The transition may be from side to side, top to bottom or center to center. The transition may also include fading in and out, popping in and out, or enlarging and reducing. The command signal may be generated by a physical or virtual button or wheel. Using a button, each press may cause a new page to be displayed. Using a wheel, a predetermined amount of rotation may cause a new page to be displayed.

The command signal may also be generated by monitoring incoming signals from other systems (whether transmitted wirelessly or via a cable). For example, if a call is received, the device may automatically configure the system as a phone. Alternatively, it may only present a control panel for taking or passing on the call.

As an alternative to integrating functionalities, the device may be configured to keep the various modes separate. That is, the device does not merge the functionality together (integrated layers and GUIs), but instead keeps them distinct from one another. In some cases, by keeping different functionalities distinct, user confusion may be reduced. 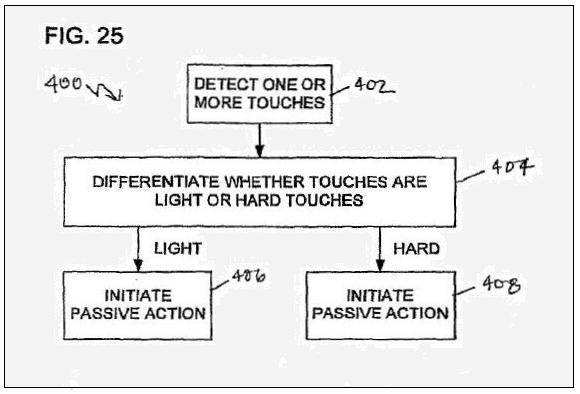 FIG. 25 is a diagram of a touch method 400 for implementing this technique. The method 400 begins at block 402 where one or more touches are detected. The touches include not only x any y components but also z components. The x and y components may be supplied by a touch sensing device such as touch screen, touch pad, or touch housing. The z component may be provided by force sensors or display actuators located behind the touch surface of the touch sensing device. 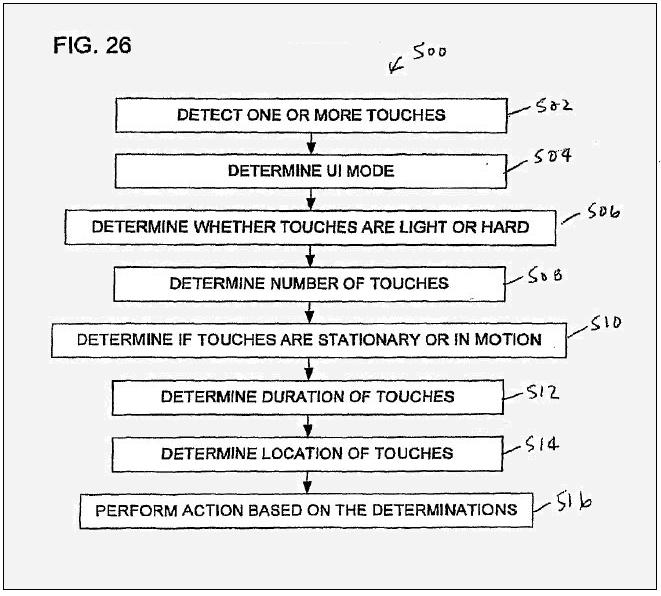 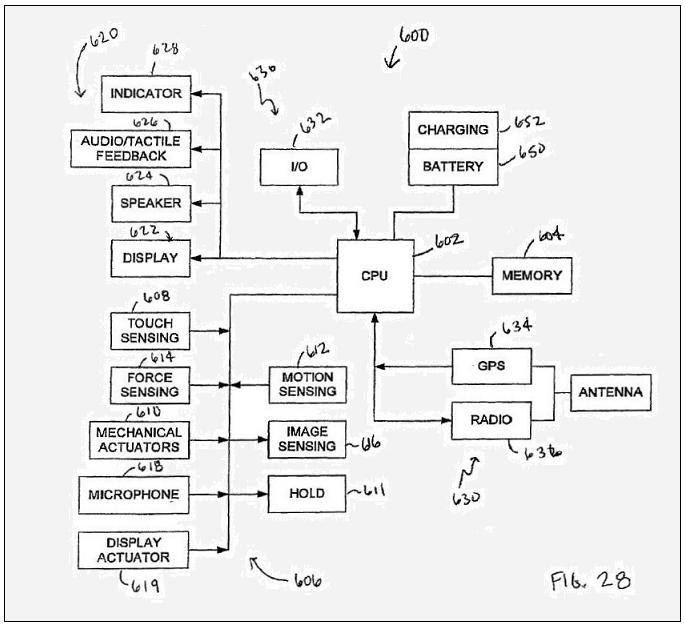 The sole inventor listed on the patent is Steven P. Hotelling who was the inventor of the Chameleon Patent of 2004.