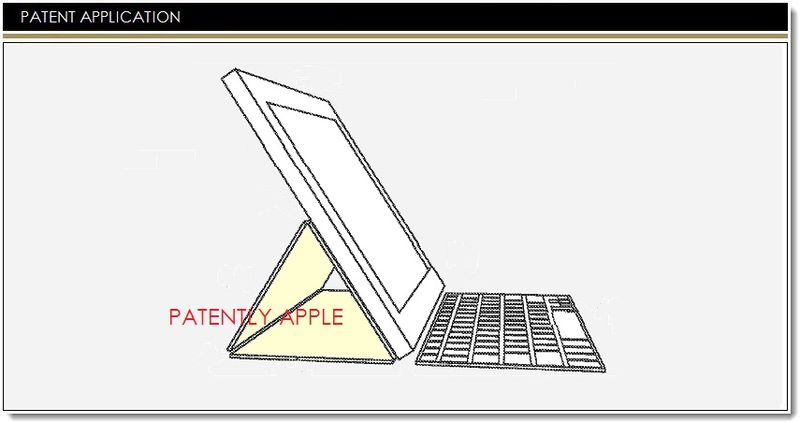 On March 27, 2014, the US Patent & Trademark Office published a patent application from Apple that reveals an all-new iPad smart cover configuration that includes a keyboard panel. One of the aspects of this design which differentiates itself from Microsoft's Surface tablet cover is that Apple's keyboard has been uniquely designed to double as a multi-touch gesture keyboard eliminating the need for a touchpad.

Apple's patent relates to a new smart cover for the iPad comprising of a cover having an interior surface that attaches to a rear surface of the iPad and to the rear surface of a keyboard that is in communication with the iPad. 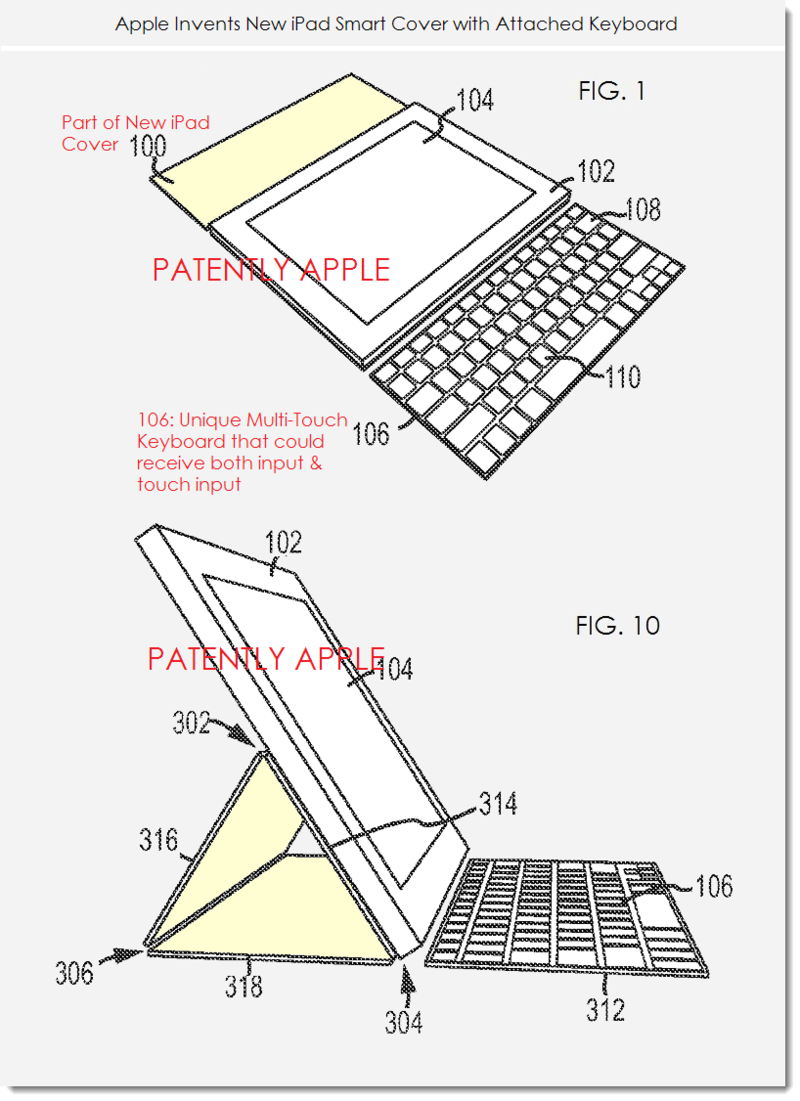 The keyboard aspect of the smart cover will communicate with the iPad wirelessly. Further, John Elias, one the original engineers for the touch technology behind the original iPhone, notes that the keyboard (#106) may be a Multi-Touch keyboard that is adapted to receive both keyboard input and touch input. In this regard, the keyboard will include a transparent and/or semitransparent touch sensitive panel. In one embodiment, the keyboard includes a smooth surface (#110) that overlays the plurality of keys. 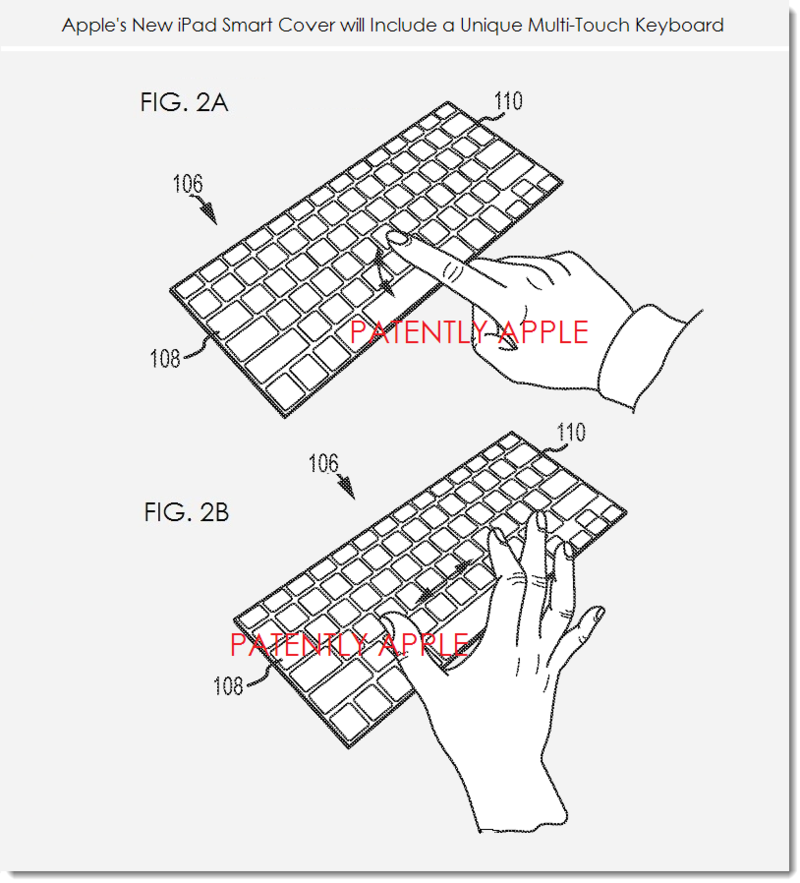 For example, the keyboard may be configured to acquire capacitive, resistive, optical, acoustic, inductive, mechanical, chemical, or electromagnetic measurements that indicate the location of touch or near touch on the keyboard surface. Software, hardware, firmware or any combination thereof may be used to process the measurements of the detected touches to identify and track one or more gestures.

As described above, touch input may be entered through gestures entered through either the iPad's touchscreen or through the surface of the keyboard. As used in this invention, a "gesture" may correspond to stationary or non-stationary, single or multiple, touches or near touches on the touchscreen or the surface of the keyboard.

According to Apple, a gesture may be performed by moving one or more fingers or other objects in a particular manner on the surface of the keyboard such as tapping, pressing, rocking, scrubbing, twisting, changing orientation, pressing with varying pressure and the like at essentially the same time, contiguously, consecutively, or otherwise.

A gesture may be characterized by, but is not limited to a pinching, sliding, swiping, rotating, flexing, dragging, tapping, pushing and/or releasing, or other motion between or with any other finger or fingers, or any other portion of the body or other object. The surface of the keyboard will generally function as a touchpad a touch pad that provides indirect interaction with graphical elements. 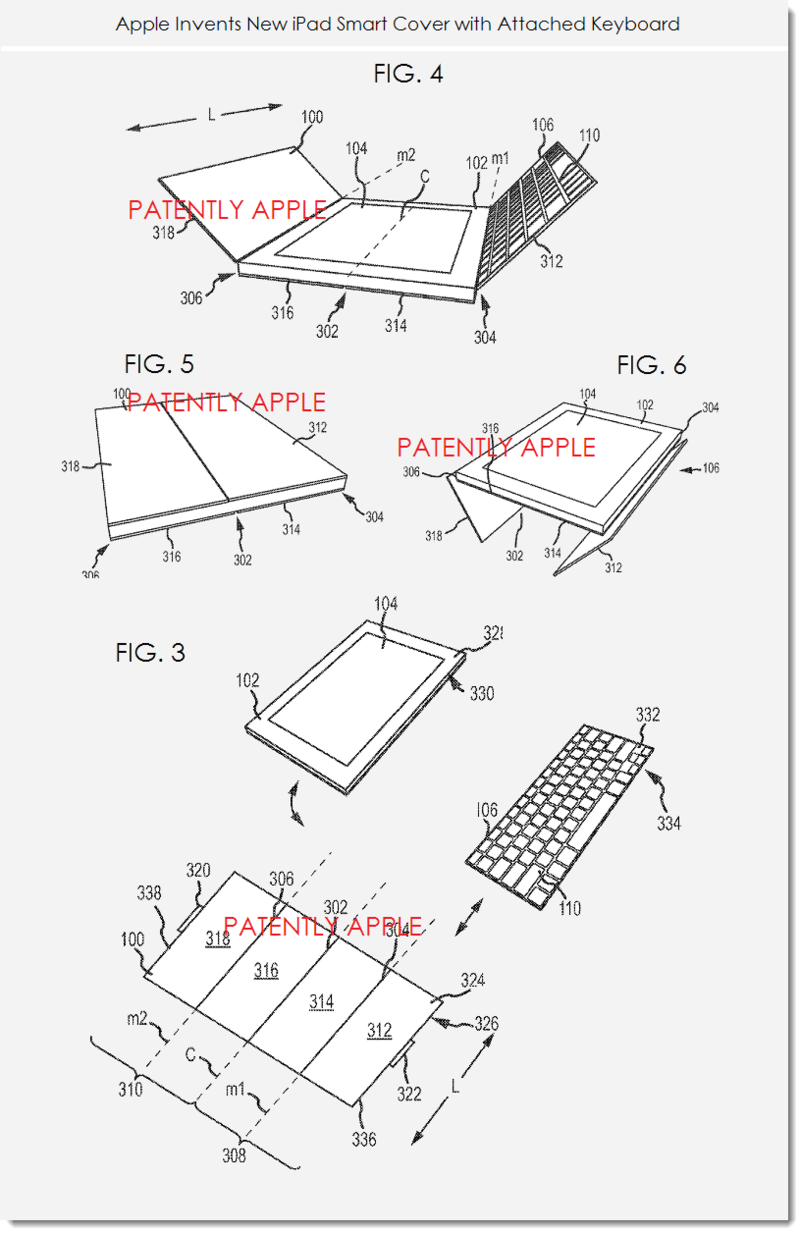 In Apple's patent FIG. 9 noted below we're able to see a close-up perspective illustration of an end of the proposed iPad smart cover. By way of example, FIG. 9 shows one end (#332) of the iPad cover which includes a closure mechanism #320 that may include a magnet #902. 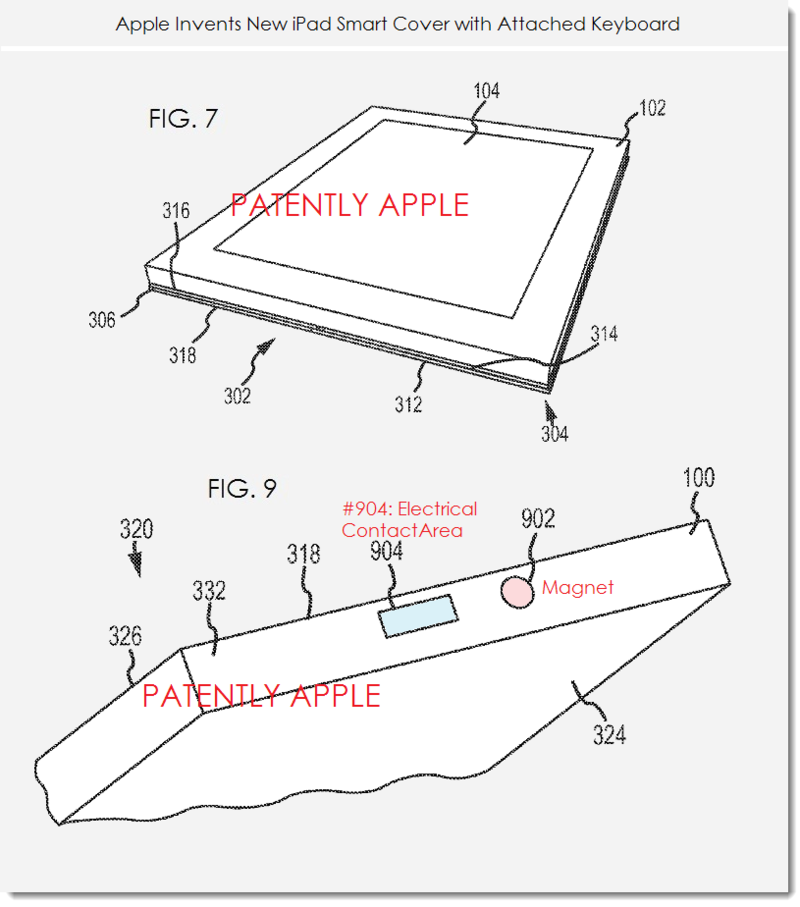 Apple's patent FIG. 7 is a perspective illustration of a fully open configuration for the cover shown in FIG. 1.

Apple credits John Elias as the sole inventor of patent application 20140083883 which was originally filed in Q3 2012. Considering that this is a patent application, the timing of such a product to market is unknown at this time.